The search is over

Stella the parakeet is an excellent mimic and her vocabulary is growing rapidly.  Her favorite phrase to repeat is "pretty birdy!" followed by a low wolf whistle.  It was amusing and pleasant to hear her repeat our words until the day she began repeating them while vigorously humping her favorite mirror.  Then it turned a little weird.

Stella's "Pretty birdy pretty birdy you're such a pretty birdy" is now accompanied by vicious cage shaking as the mirror gets what's coming to it.  If we have visitors over, I try to distract her by waving towels at her cage, "Stella, stop it, my God, you're in the middle of the kitchen and I'm serving appetizers!" but she will not be swayed from her mission of making love to that pretty, pretty birdy.

Lucien has asked lots of questions and I've answered them honestly.  I think it's great for him to have a front row seat to the birds and the bees -- the bird part anyway -- over his cereal bowl in the morning.  The teacher has already called to report Lucien told her, "my bird wants to have sex with herself all the time" but after my explanation we had a good laugh.

Stella is a true Narcissus. It also appears she's reaching sexual maturity.  It also seems fairly obvious Stella is a male.  We're not changing her name, though.  I don't think she'll care, doubt she'll even notice because she's so busy -- *bang bang bang bang* -- over there.

Alex and I took part in a scavenger hunt over the weekend.  We were teamed up with dear old friends who live in Tacoma.  Our team name was Panda Lovegods.  We dressed in black and white, chewed on bamboo, dragged a few stuffed pandas around on leashes.  Nobody on the streets gave us a second glance because such antics are par for the course in Seattle. 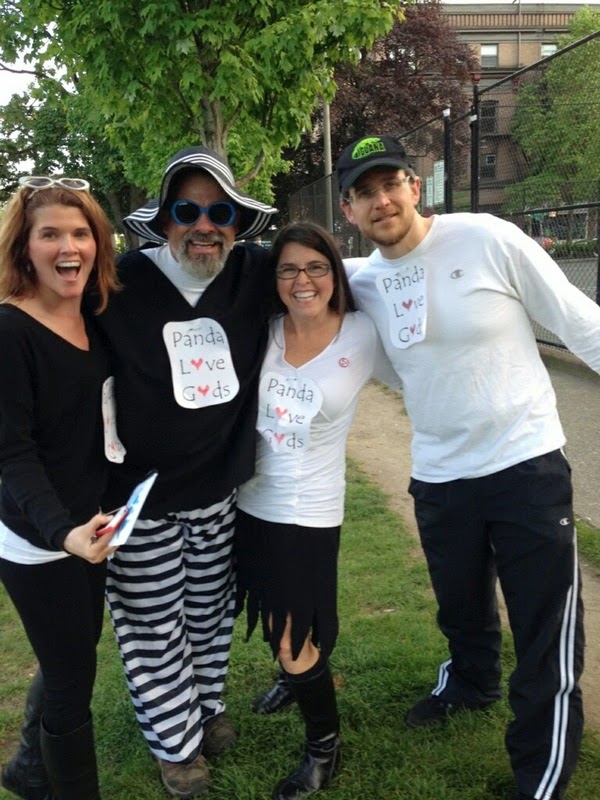 The scavenger hunt brought out the seething competitive side that exists in all four of us.  We're pretty laid back people in daily living but something happened as soon as the competition began.  Alex was our driver and was so amped up he didn't break just some of the driving rules, he broke ALL the rules as we careened around the city screaming.

Our friend and teammate, Tacoma Dad, said last year they were paired with a much less competitive couple who, instead of rushing from clue to clue, insisted on moseying.  He said by the end of the evening the woman was crying and begging him to slow down, then telling him he had ruined the entire evening for her and it wasn't fun anymore.  He tried to tell her, "There's no crying in scavenger hunts, hippie!" but it didn't get her to move any faster.

This year's hunt led us to parks, laundromats, a mambo dance lesson, and a karaoke bar where we were forced to perform Simon and Garfunkel's "The Boxer."  It's tough to get the crowd on your side when you're singing "The Boxer." They all stood there, bored, arms crossed like "Who are these clowns with pandas on leashes singing a snoozefest song in the middle of our party?" 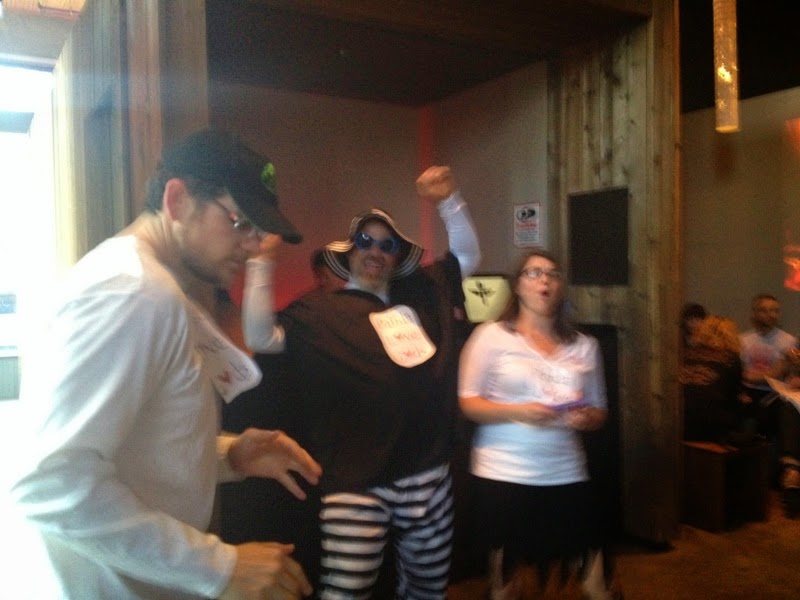 And why is the one guy dressed like the Hamburglar?

One stop had us throwing darts at balloons in a park.  There may have been one errant dart accidentally thrown at a dude on a bike but thankfully he didn't get hurt.  As an aside, is it legal to throw darts in public parks?  Because it shouldn't be. 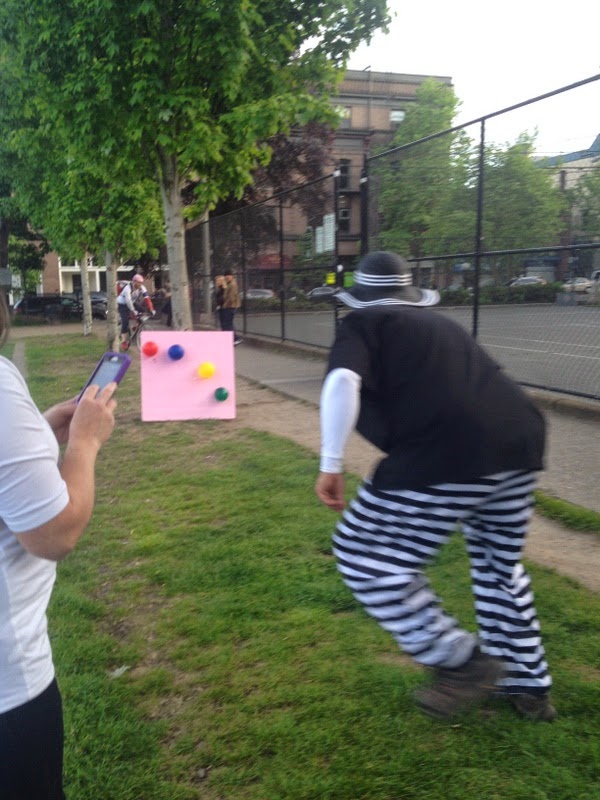 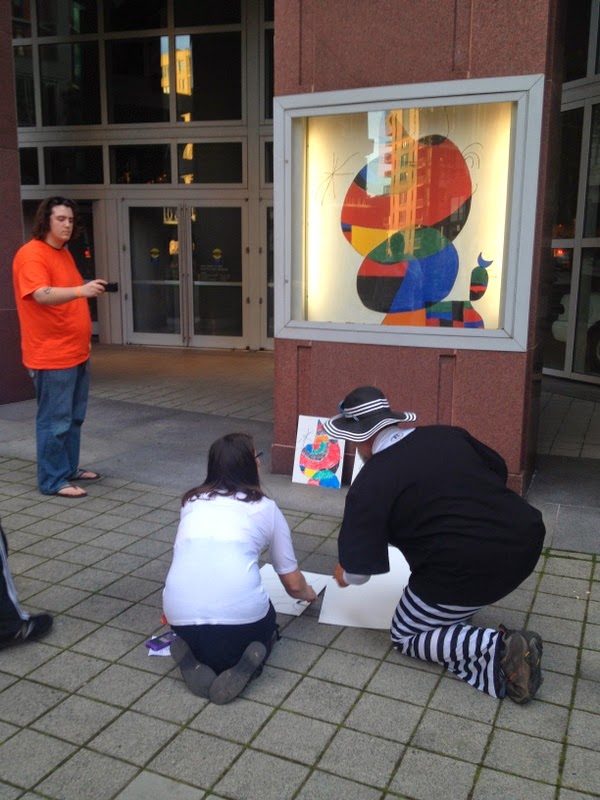 The art museum is where we pulled ahead of the other teams thanks to exquisite teamwork.  Tacoma Mom drew the shapes, the rest of us intertwined our arms at odd angles and climbed over each others backs to get them colored in. We were like a writhing ball of pythons clutching markers.  A group of tourists took pictures of us.  "It's true, Seattle people are so odd!" they may be telling friends back in Saint Louis right now.

At the second to last stop, things got rough.  The clue handed to us at the pitstop was a bag of fortune cookies.  As we ran to our car, which was parked in front of a fire hydrant obviously because anything to win, I opened my fortune cookie, pulled out the fortune and popped the cookie into my mouth.  I couldn't help it; fortune cookies are delicious.

Suddenly Tacoma Dad said, "Guys, there are two pieces of paper in the cookies! Find both of them!" and my heart sank.  "Uh-oh," I thought looking down at the solo piece of paper in my lap, "I'm pretty sure I'm eating a clue."

Indeed I was.  I fished the second piece of paper out of my mouth but it was no longer legible.  We hoped to figure out the clue using just the other three but those clues put together read, "GO....TO....PIER..."  and Tacoma Dad yelled, "Dammit, MJ, you ate the pier number!" We all agreed it was the most important piece to the puzzle and a most unfortunate circumstance.

We got back on track but then things got worse. We really botched it at our last stop after having been in first place for a long, long time.  In a catastrophic misinterpretation (with just a touch of laziness), we gave the tickets we were supposed to use for ourselves on Seattle's Great Wheel to a passing couple.  They were crabby people and in retrospect probably did not deserve our gift -- 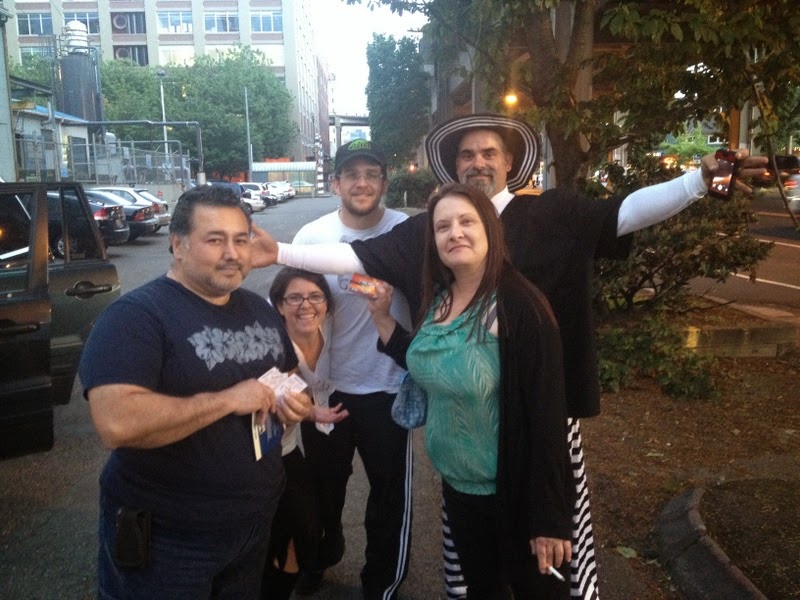 It's a long story.
We were wrong.

Immediately after it happened we received a phone call from the organizers telling us even though we were in first place and technically were finished, we were going to finish as "incomplete" because we hadn't completed our final task.  Our dream of victory was dashed, it was over.

We walked back to the car (parked in a "police vehicle only" spot obviously) with heads hung low.  We are all buoyant by nature, however, so soon decided we won in our hearts and were the best scavenger hunt team ever.  Then we went to a bar to kill time while waiting for the other loser teams to finish.  We took pictures of the animal puppets we obtained earlier in the evening drinking beer because what else are you going to do with them? 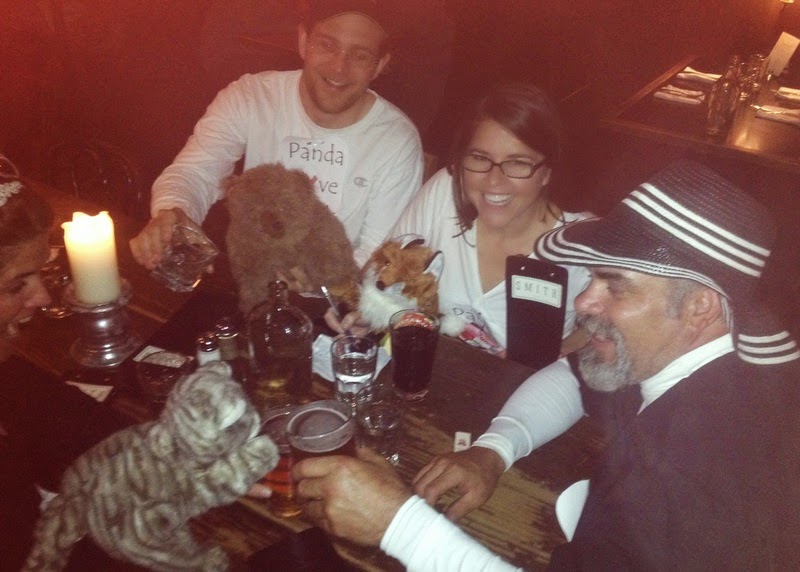 We're going to do the hunt again next year, only this time I'm not going to eat any clues and we're going to make sure we don't do any wrong things.

Four-way purgatory and hobos under the porch

When the weather improves in Seattle, life for those of us in cars happens at 10 mph.  The drive to and from the kids' schools takes twice as long because everyone in the city has decided to make their way to work entirely outdoors.  No car nor bus shall block the sun from touching their pasty pale skin.

Pedestrians and bikes and skateboards and dogs on long leashes jump out from every corner.  People in cars inch forward at four-way stops waiting for the crush of pedestrians to cross, then wait for more straggling pedestrians to cross, then wait for the bike to get out of the way, the one with the rider who ignored the four-way stop and careened through the intersection with a serious case of bicycle privilege.

It makes four-way stops nearly impossible to get through.  All the cars have been waiting for so long nobody remembers whose turn it is anymore.  Then begins the courtesy waving -- "You go.  No, you go.  No, really, please, you go.  No you, I insist, please."  After many rounds of waving all the cars lurch forward at the same time only to stop with a screech of brakes when everybody notices everybody else is moving too.  Then there's another round of crossing pedestrians followed by another round of waving.

Welcome to the Pacific Northwest, where everybody refuses to go first when there's the possibility to let somebody else go first.  It's a miracle any of us ever get anywhere.


We had a good Mother's Day.  Alex and the kids made me breakfast then Alex went upstairs to catch up on some work, leaving me alone with two kids and a necessary grocery store run.  I couldn't help but think something had gone wrong with my Mother's Day as I pushed the cart through the grocery store -- filled almost exclusively with men and their young children -- and listened to my two kids fight over dumb things such as the best Tic-Tac flavor.  (ORANGE!  STRAWBERRY!  ORANGE!  STRAWBERRY!)  One man chuckled as he passed me and said, "Oh no, what are YOU doing here today?" and I replied, "I'm wondering the same thing."

Al's workload is intense, no doubt about it, but sometimes I think he makes up "work" so he can get out of taking the kids to the grocery store.  He's a really smart man, wouldn't surprise me.

We had friends over for Mother's Day dinner.  Our friends sunned themselves on the back deck while Alex and I prepared the food.  All our kids played together in the yard.  It was a glorious evening.

Suddenly, Lucien ran up onto the deck and yelled, "You guys, there's a hobo under the porch!"

Now, I've mentioned before our family's issue with the hobo spider, which is the poisonous spider we have to deal with here in Seattle, the very spider we found in our house last year.  Our family is therefore more aware of and paranoid about the hobo spider than most Seattle residents. Our confused visitors, who were not familiar with the spider, instead understood Lucien to be telling them there was a homeless person under the porch.

They jumped up in concern, "Wait... WHO'S under your porch?" Lucien didn't answer, only babbled on with flustered excitement, "You know what? Mom and I discovered a hobo can live for two weeks without food when we captured one last year."

My friends love me, this I know, but for just one brief second, before I came outside and explained, they likely wondered if they really knew me at all.  They also probably made plans to get themselves and their children out of my house as quickly as possible.  Because I was obviously a psychopath who starves homeless people for sport.

The blog may suffer in the coming months because I am working on the Paris book and am having a hard time making time for both.  I want to thank those of you who stuck with me for the duration of the Paris blog because as I read it all over again, I realize how crappy a lot of that writing was.  I was definitely too attached to the exclamation point.  I promise I'll make it up to you! and make it! better! this time around.