School's out for summer, finally. By the end of the school year, I cannot wait for summer break. And by the end of summer break, I will be staring at the calendar all day every day desperately counting seconds until school starts again, which it will do just in the nick of time. These things are perfectly timed for my mental and emotional limits on either end.

Lucien has completed 7th Grade. It wasn't his easiest year but I don't think 7th Grade is ever the easiest year. It actually may be the year that sucks the most so taking that into consideration, he rocked it.

The Loosh was enrolled in a phys ed class this year called "Urban Hiking" led by an intense teacher who is big, intimidating and, as Lucien said, "somehow has a nose in the shape of an 's.'" The teacher declared they were going to try a heart rate experiment and gave the kids heart rate monitors and iPads for their urban hike that day. Everyone's heart rates were there on the iPads in a list for everyone else to see. A box next to their names turned green, orange, or red depending on how hard their heart was working. The kids were instructed to keep their heart rates in the green range, the acceptable range for the activity at hand, at all times.

It was a pressured situation. And Lucien is not the most physically active person in the world, ahem. His primary passions are video games and ants, both of which involve focus and intense staring, occasionally with a magnifying glass, but neither involves much movement. 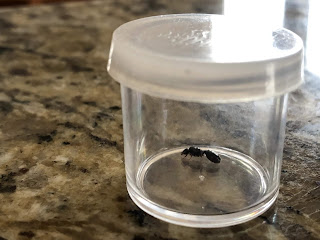 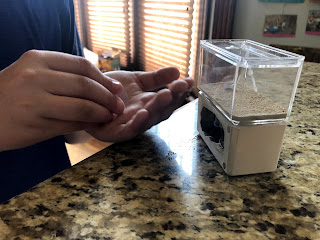 He caught this queen ant during her nuptial flight last month.
It's a long story.
He is now growing his second colony.
He is so happy with the ant situation.

So... nearly immediately upon beginning the urban hike, Lucien's heart rate spiked into the orange range and his classmates yelled, "Oh no, Lucien's dying already!" (He told me later, "Mom, I swear, it only took like five steps for my heart to be like 'nope.'") By the time they got up to the park, Lucien and a handful of other kids were in the high orange range and their teacher was hopping around in front of them demanding they get back into the green, which only pushed their heart rates closer to the red. It is apparently difficult to lower your heart rate when someone is in your face insisting you do so immediately.

The teacher told the red-orange kids to stop walking and get on the ground but to keep moving in some way until their heart rates were green. The orange kids dropped into the grass and began squirming on their bellies like army cadets at basic training. This did nothing to lower their heart rates, in fact increased them by quite a bit because now passersby were staring. The orange kids then laid in the grass and attempted movement with even less movement. Lucien said he laid on his stomach, reached his arms out to the sides and wiggled his fingers. One boy gave up and laid in the grass whistling and staring at clouds with his legs crossed. One girl log rolled side to side halfheartedly.

As their classmates walked green-zoned circles around them, the orange kids bonded in the grass over their mutual agreement that 7th Grade is pretty much the worst.

(My takeway: Lucien needs to jog around the block more often.)

I have two new foster dogs. Rasta is an 8-year-old poodle mix rescued from the streets of Mexico and Ralf is a 6-month-old Formosan rescued from a mountain in Taiwan where he'd been abandoned with his littermates.

Rasta the mini poodle is a small feisty dog who thinks he's a big scary dog. He regularly attempts to attack Natani even though we tell him it's a bad decision every time. She could kill him, of course, but thankfully Natani doesn't have murder in her heart. She just kinda looks down at the little growling thing hopping around spoiling for a fight then looks back up at me with question marks in her eyes. 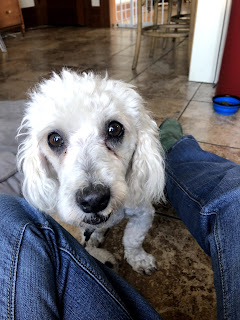 Can I kill the big doggie, foster mom?

Most of my day is about trying to keep Rasta quiet. He is a vocal one. My neighbor walked past the house the other day while I was out in the yard and asked how my foster dog, Bob, was doing. I responded a bit confused, "Huh? Bob?" and the neighbor laughed and said, "Yeah, we call him Bob Barker." Yikes. (My takeaway: I should send all my neighbors fruit baskets.)


Alex usually comes for dinner once a week. The day he was scheduled to come here was also the evening Ralf the Formosan puppy was due to arrive at the airport from Taiwan. We decided to go to the airport for dinner and pick up Ralf together as a fun family activity. 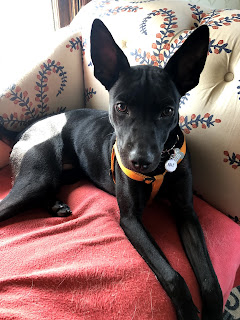 Ralf and his littermates were wheeled out from the oversized baggage area in big crates on carts. There were six of them in total, all of them shaking, exhausted, confused from their long journey. The director of the dog rescue organization warned they would be distressed when we wheeled them away in opposite directions since it would be the first time they'd ever been separated. And sure enough, as soon as the first dog began rolling, the high pitched, frantic dog shriek screaming began. It was ear splitting, heartbreaking, and awful.

We fosters just looked stunned at each other and said, "Uh-oh, this is gonna be ugly. Like a band-aid, people, GO GO GO." and took off jogging with our dog carts. The noise got louder then, so shrill and frantic as we all bounded away trying to get them into cars as soon as possible. People waiting for their luggage at the carousels stared incredulously as the gang of us sprinted past. Many plugged their ears.

I wonder what those people saw, what it looked like from their perspective. I imagine it looked something like a little dog crate race, with all of us pushing our carts and taking corners too hard at high speed as we slid sideways.

We dove into an open elevator only to realize there was already another shrieking Formosan inside of it. The dogs, sensing proximity to a sibling, went absolutely insane. It was a sound I'm not sure I can accurately describe but I will try -- "hellish cacophony exploding shriekbomb." I exchanged desperate looks with the other foster mom, whose bangs had fallen into her eyes from her dog running efforts so she was trying to blow them out of her face, and immediately yelled at my family to "reverse! reverse! reverse!" I'm fairly certain we all would have suffered permanent hearing loss on that elevator ride.

Ralf gave up after that but the other dogs shrieked all the way to cars. We could hear them from different corners of the parking lot. By the time we got to the car, we were sweaty and tired and pretty damn stressed out. Alex said, as we climbed into the car, "This was fun, Min, I'm so glad you're fostering dogs now." I sense he was being sarcastic but let's believe he was serious for a minute and truly appreciates my dog-saving efforts.

Happy news, Ralf was reunited with his siblings at an adoption event a week later and they all piled together in a sweet little Formosan heap. 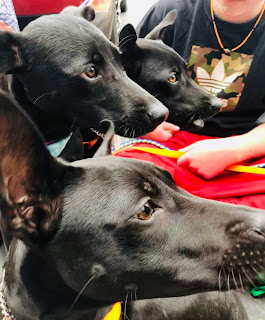 Beautiful brothers staring at a bag of treats
and wanting the treats very much.

Ralf goes on trial adoption later this week. I'll miss the shy guy. Rasta may never go on trial adoption because he is a very loud little dog.  Rasta is also a passive aggressive poodle. He does not like sharing my attention with Ralf, and lets his displeasure be known by peeing on Ralf whenever Ralf is sleeping. 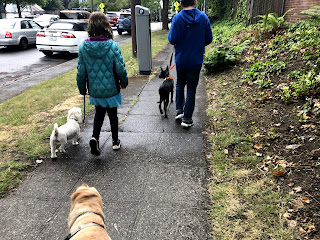 I require assistance from the kids when walking three dogs.
Especially these three.


Here's to the orange kids and foster dogs.
Struggle brings strength, y'all,
MJ