You, too, can drive to Alaska 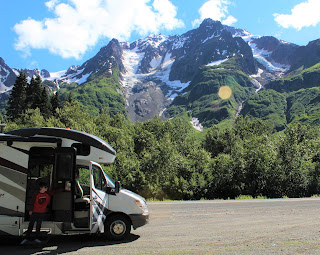 We've been back from Alaska for a mere few weeks and I'm already plotting how to return to Alaska. My head is full of bizarre ideas, such as leading annual caravans up the Alaskan Highway for my friends, or sneaking into suitcases of unsuspecting cruise ship passengers, or maybe just heading off into Denali with a backpack and a dream to test my survival skills.

That last one would probably land me on a bush plane back to civilization within the hour. But the vastness of Alaska makes you dream big impossible dreams that are nowhere near your actual skills or abilities.

Our nearly month-long trip is almost too big to write about but I'll give it a shot for the sake of posterity, and in an attempt to maintain some sort of presence here on the blog. If I inspire anyone else to jump in a car and drive all the way to that gargantuan beauty of a place, I'll consider my work here successful. Contact me, I'll help you plan, and then I'll go with you.

The most important thing to know about driving to Alaska is you have to really, really, really love to drive. If you don't love to drive, this trip will be your personal hell. It's a lot of driving. A lot a lot. You should also probably appreciate trees.

I'm a long-ass road trip enthusiast, a well-established fact which has led Alex to often comment I should have been a long haul truck driver. There are fewer happier places for me than being behind the wheel of a vehicle, loved ones in tow, a jumbo sized can of Pringles in my lap, driving down a seldom-traveled road through incredible things. The Alaska road trip was made for me because you get a lot of that. 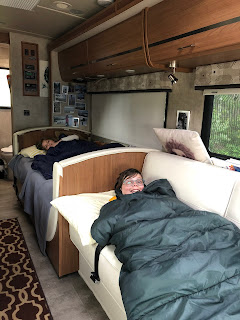 This is what the kids look like most of the time inside the Winnie B.
There is a lot of sleeping.
Alex didn't drive for even one minute of this trip
because I am a road trip driving hog.

The legs are long. Our first day was 14 hours and we barely got to central-ish British Columbia, Prince George to be exact.  Our second day we drove another 11 hours to a town called Hyder, which is technically in Alaska but is not accessible from anywhere else in the state; you must enter it through British Columbia and go back through the cutest, tiniest little customs stop when you re-enter Canada.

We spotted four black bears on that drive to Hyder at various spots along the road. It's an exciting drive when every once in awhile you or one of your family members screams, "BEAR, BEAR, BEAR!" and you have to slam on the brakes real fast. I got a little jittery trying not to hurt bears nor us, but nothing a little coffee didn't make worse.

Hyder is charming in its friendly ghost towny kind of way. Maybe the best part of Hyder is the drive there, especially the 45 minutes spent cruising the Glacier Highway. You turn a corner and bam, Bear Glacier. 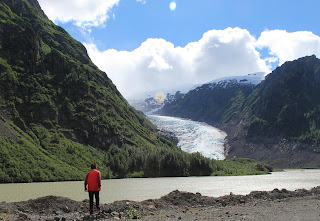 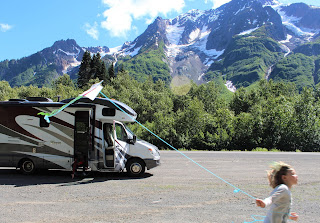 Entrance to tiny Hyder from Canada -- 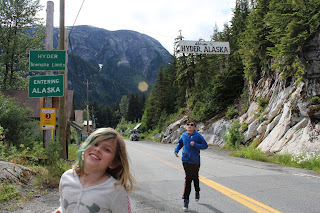 There are lots of abandoned structures in Hyder, remnants of the town's heyday as a mining hub -- 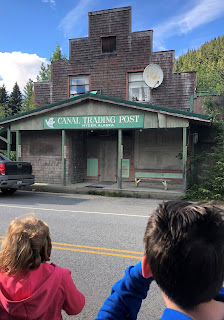 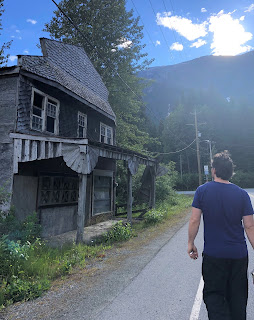 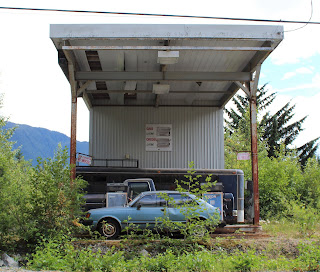 We had a nice snack at the only open establishment in town, a bar/restaurant called The Glacier Inn. The server asked Alex and me if we wanted to get "hyderized" and we said, "Yes, of course!" before we knew what the hell she was talking about. It turns out getting hyderized involves doing a shot of Everclear up at the bar in front of all the locals. The instructions were serious -- we were not allowed to sniff it nor sip it and had to shoot it all in one shot without a chaser. If it came back up, we owed everyone in the bar a drink.

Alex had no trouble but I did that shot and my entire body rebelled. I was on fire in my face area. It was a close one, a very, very close one, and it took several minutes to ensure I'd truly been successful as I rested my head on the bar and mentally invented lots of new swear combinations like "mothershit fucker fuck" while everyone watched and waited. That Everclear wanted badly to come back up but I held it down, didn't vomit all over the place, so my pride remains intact in Hyder. The locals looked a little disappointed but gave me high fives anyway. Then we got these little certificates -- 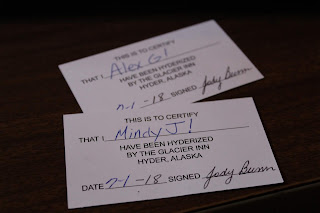 (mine should say "just barely.")

We tried to teach the kids how to play pool at The Glacier Inn for awhile, the only problem being Alex and I both suck at it -- 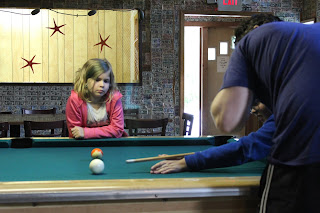 The locals then advised us to head to the food truck at the end of the road for "the best fish tacos in Alaska." That sounded like something we very much wanted to try so we walked through Hyder, appreciating its odd little self, feeling enthusiastic for fish tacos. 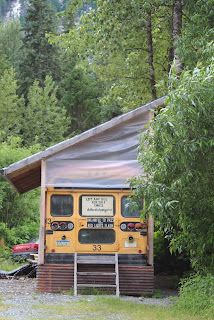 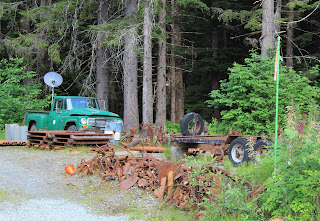 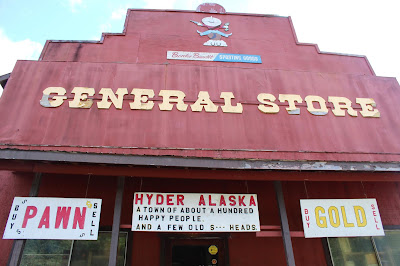 We walked up to the fish taco truck but the woman working there stretched her arms out towards us as we approached and said, "I'm sorry, we're all out, Ed ate them all." This struck us as funny and we threw up our arms and yelled stuff like, "It's always goddamn Ed! Dammit, Ed, you stop eating my tacos, Ed!" It may have been the Everclear talking. 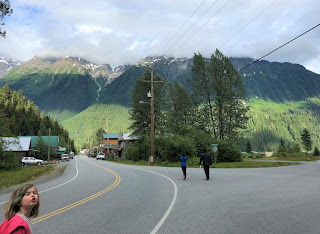 No tacos for you, Coco.

After a night spent near Hyder in Stewart, B.C., the third leg of our trip was a very exciting one indeed. We took the Cassiar Highway, which at many points dissolved into a gravel road with no shoulder and little warning, and we saw lots of bears.

It's important to note here that no drive to Alaska should be attempted without the Bible of Alaskan travel, the Milepost. The Milepost is the most amazing thing you've ever seen, giving mile-by-mile information on all the most popular and most remote roads to Alaska and throughout Alaska. It's a traveler's best friend when you're in the middle of godforsaken nowhere. At the very least it's comforting to know somebody has been through there before you. 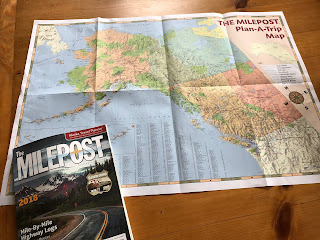 The Milepost is most crucial when it comes to finding gasoline. I mapped out our gas stops as fastidiously as I mapped out the rest of the trip. Calculate the miles, know your tank's limits, and for the love of God, stop for gas if the Milepost tells you to, even if  you have half a tank and it's a middle-of-nowhere nobody-around gas station that seems likely to be operated by grizzly bears.

The drive up the Cassiar Highway took us past a few glacier-fed lakes. Glacial runoff water is damn freezing cold but that didn't stop Alex from stripping down and jumping in. He just kept yelling, "I'm from Quebec, bitches!" as he floated around out there. I then turned to the children and said, "So we need to be prepared for when hypothermia sets in, which should be any second now, and we're gonna have to jump in there and drag him out before he dies." 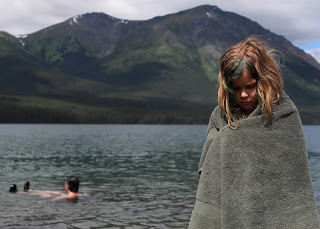 Coco is saddened by the thought of losing her father
as he floats around behind her yelling,
"Is this all you got? This is nuthin'!"

By the end of the day, maybe 10 hours later, we had arrived in the Yukon. It was a triumphant moment when we crossed that border. It was also the moment mosquitoes the size of Volkswagens began attempting to devour us whole. Lucien grabbed our insect zapper racket thing and was very attached to it for the remainder of our trip. We should start him in tennis; the kid now has a vicious swing. 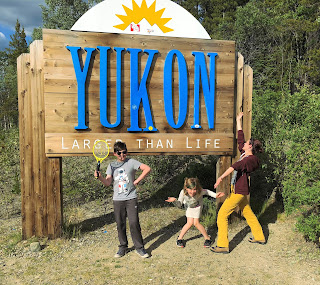 We stayed in Watson Lake, Yukon that evening, finally joining up with the mecca of Alaskan road trip travel, the Alcan Highway. Our campsite that night was a gravel parking lot with little going for it, yet was the most expensive of our trip at 50 bucks. They can really gouge you along the Alcan when pickin's are slim and you're desperate for a real shower.

There is only one thing to do in Watson Lake, Yukon, and that is to visit the enormous sign post forest. The sign post forest is a landmark along the Alaska-Canada Highway. Travelers from all over the world making the trek up the Alcan bring a sign from their home town to hang on any one of the hundreds of wooden posts to mark their crossing.

I had read about the sign post forest while researching the trip so came prepared with our Seattle sign. The four of us signed it, dated it, drew smiley faces on it, and prepared to leave our mark in the immense "forest" composed of over 90,000 other signs. 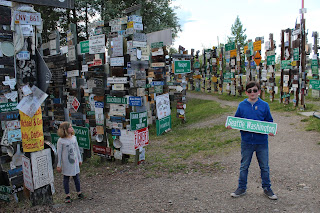 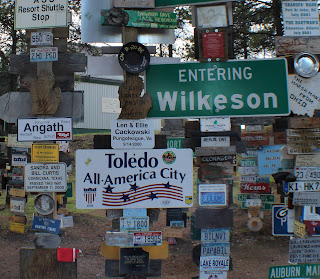 pleased to see my original hometown of Toledo, Ohio representin'

All the posts were full. The town cannot keep pace with the number of people who want to hammer the name of their hometown into a piece of wood and have fallen behind in their new post installation. The only place we could find to hang our sign was up very, very high and the only way to get any of us up that high to swing the hammer was to stand on Alex's shoulders. I was the only viable candidate, as Lucien and Coco were too short plus lacking in hammer skills plus it is our job to "protect them" or whatever. 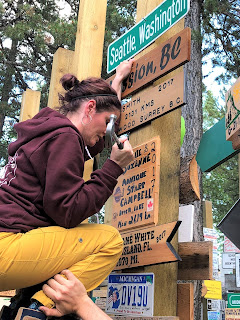 This was a tense moment in our relationship. As you can maybe tell by my face below, I was getting serious with Alex and saying, "I swear to God, if you drop me, you won't live to see morning." He swore it would be OK, that he could do it with little trouble because he works out a lot. I've never appreciated his hours in the gym more -- 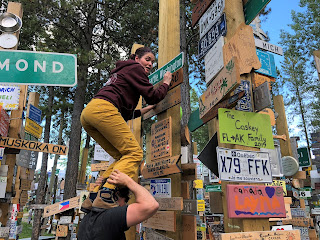 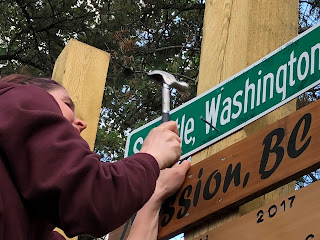 Those were some stressful moments balancing on Alex's shoulders like an unskilled circus performer while hammering our sign into the post. The kids held their collective breath below, as did several other visitors. As I held that first nail in place with one hand and swung the hammer with the other, unable to hold onto anything else for stability, I seriously wondered if this damn sign had been worth the grievous bodily injury I was about to inflict upon myself. 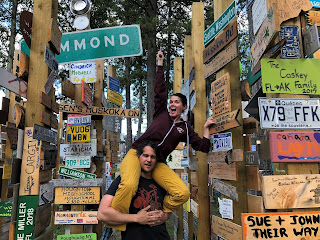 It was. We did it. We left our mark as Alaskan travelers in the Yukon.
The kids applauded enthusiastically.
And Alex lived to see morning.

Trip thus far, for orientation's sake -- the arrow down in the lower right is Seattle. First leg was to the second arrow above it at Prince George. B.C. Next leg was driving west to the arrow at Hyder, AK. The third leg was driving north to Watson Lake, Yukon -- 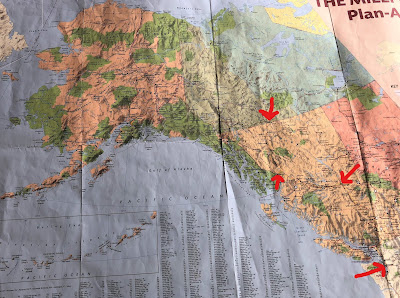 I really love to drive.

It's a looong trip and we're only three days in. These blog posts shall stretch out as large as the state of Alaska itself.

Everclear is the worst but Ed is a close second,
MJ
Posted by MJ at 2:36 PM 4 comments