Alaska is on hold because Waffles doesn't give a damn.

I'd like to get in here and talk more about Alaska -- I've had a post in the works for weeks now -- but I've gone and done something that has made doing so much more difficult than it already was. My thought process on this one was enthusiastic and brief, perhaps too brief. It was a spontaneous "Imma do that!" without much thinking about what came after. I'm an Aries, which, from what I understand of astrology, means I am easily filled with childlike enthusiasm for stupid things.

I must have been longing for more chaos and less sleep. Maybe I wanted to buy a lot more paper towels. Maybe I just wasn't happy with the level of poop on the floors of my house because my recent foray certainly fixed that last one -- 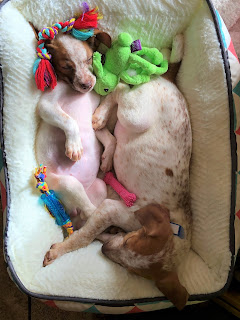 They're not mine forever, I swear! I've volunteered to be a foster dog mom for an organization that rescues pups from high kill shelters in the South. These are my first two charges, a brother/sister duo, hyper little foxhound mixes from sweet peachy Georgia. 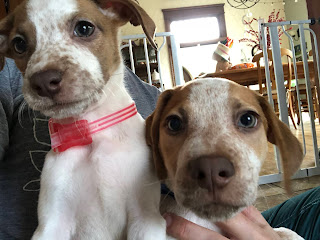 It's tough to keep up with two puppies, even with both of them barricaded in the kitchen most of the day and watched with exhaustingly constant vigilance. If I see Atticus sniffing suspiciously and run forward to grab and run him outside, Waffles will definitely take advantage of those two seconds of inattention to pee and poo in all corners of the kitchen and chew through Lucien's headphone cord. When she's done destroying the place, she pounces on my ankles with a jubilantly wagging tail. She's always so dang pleased with herself.

I'm so tired. It's kind of like having an infant again minus the "they sleep in a cage and I can put them in that cage when I go to the grocery store, too" parts.  I hear you definitely can't do that stuff with human babies.

Natani loves the puppies. I think she sometimes yearns for her lonely days, stares into the distance and pines for solitude as puppies crawl all over her and chew on her ears, but overall she is the best foster dog mom I could have hoped for. 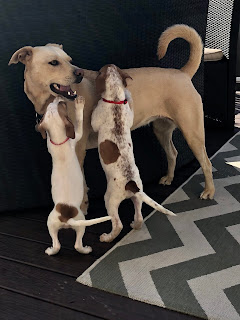 Sigh.
This is my life now.

I mentioned in my previous post we'd lost a pet. It obviously isn't Natani, thankfully, because I need her right now. We thought Bobo would be the next pet to go -- he is one old, old lizard -- but no, Stella the parakeet went first.

Stella made us crazy all the time. The chirps were redundant, constant, loud, shrill, and made us all mental. "STELLA, STOPPPPP!" was a regular refrain from dawn to dusk. Yet the day they disappeared, those constant chirps and learned phrases ("You're a pretty birdie!" was a regular one and unfortunately, thanks to the siblings, "Shut up" was another), the vastness of the silence that descended upon this house hurt our ears more than her constant noise ever did.

I emptied out a box of checks and lined it with cotton balls. I placed Stella's body on top. I wanted the kids to see her comfortable when they came home from camp. I didn't have time to bury her after our tearful goodbyes were said so I chucked that box of checks into the freezer, where it remains to this day. I feel intense guilt whenever I open the freezer to grab some frozen peas for dinner and see her check box coffin lying there. One of these days we're gonna bury that pretty, pretty birdie.

I am now assisting Bobo in daily exercise routines and feeding him a high protein/low carb diet. We can't lose another pet so soon, dragon!  Keep moving those little lizard legs!

I'm throwing my big Halloween party this weekend. And after the weekend, I'm taking on yet another foster puppy. Somebody stop me, what the hell am I doing? 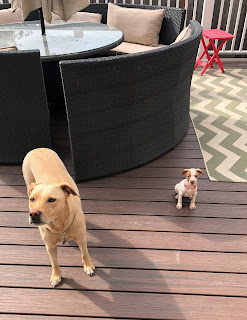 they're just so damn cute