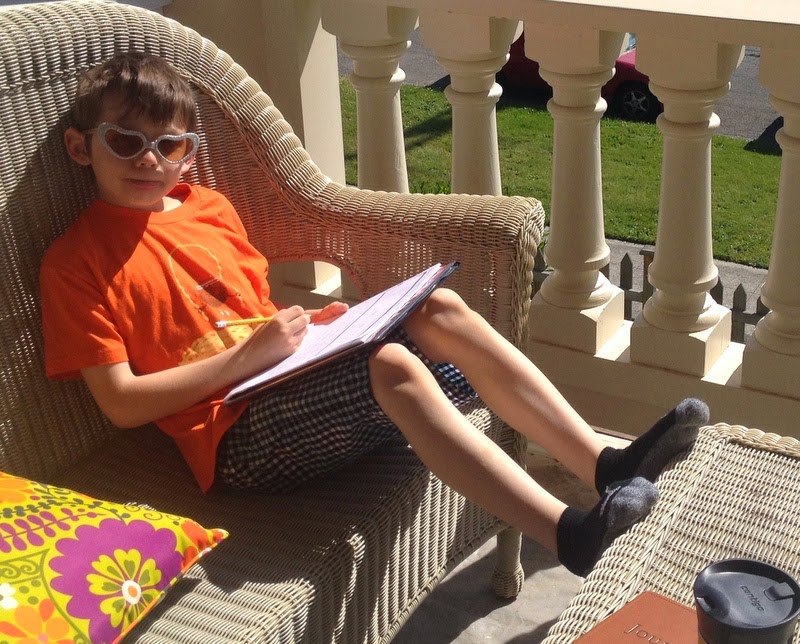 The end of the school year is chaos.  There's a ceremony or event every day at one of the kids' schools. None of them are very fun and they all seem designed to make parents insane by being either emotionally manipulative (Her "graduation"? What? She's four years old!) or too overwhelming ("Come to the school carnival where a constant stream of screaming kids are going to step on your toes as they run past you. And you have to work at a booth. And it's going to be hell.")

School stuff aside, our general contractor showed up on our driveway recently and started to cry.  His wife of 30 years just left him and now he can barely get out of bed.  It's hard to pressure a guy in a situation like that so our exterior project may never be finished.  We may have to be OK with a half painted house.

(We're giving him some time to regroup and then will gently suggest he focus on his work, that his work will give him strength and pull him through...)

I chaperoned Coco's preschool field trip to a nearby farm a couple weeks ago.  I spent most of the farm visit shielding a little girl from view of the pigs, of which she was inexplicably terrified.  If she happened to look up when my body wasn't blocking her view of said demon pigs, she would start screaming. 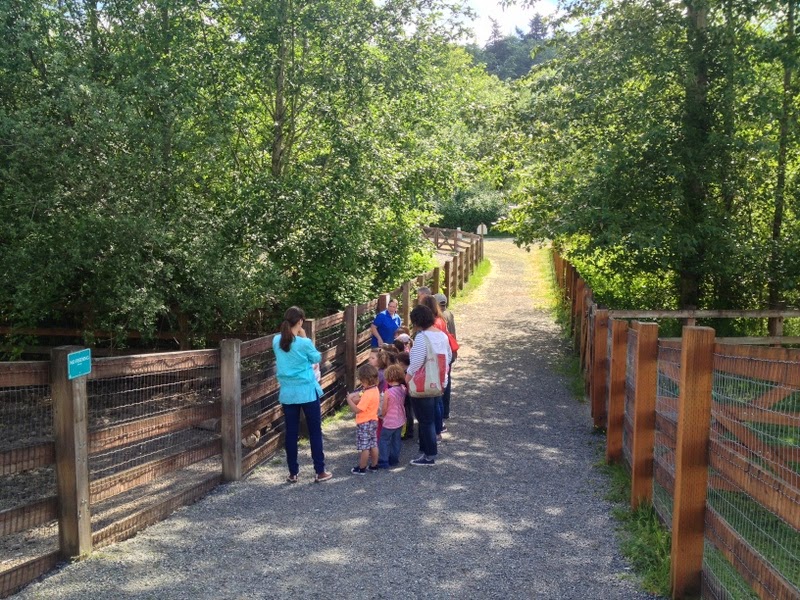 this is how far we had to stand from the pigs

At one point we had to walk past the pig pen and that was a tense moment indeed.  I picked up the little girl, her screams in my ears and her kicky legs landing directly on my kneecaps, and ran past the pigs.  I deposited her safely on the other side of the pig pen in front of a cow who had her nose stuck through the slats of her fence.  The little girl didn't like that cow either so I had to pick her up again and run past the cows.  Rinse and repeat at the goats.

That was exhausting but the worst part of the field trip was the constant singing of "Frozen" songs from the four little girls packed into my car there and back.  It seems I wasn't the only one suffering; when we got back to school, a fellow chaperone threw open his car door and fell helplessly to the pavement pleading, "If I hear one more "Frozen" song I'm going to lose my mind, please make them stop, please, please."  But they didn't stop, they'll never stop. 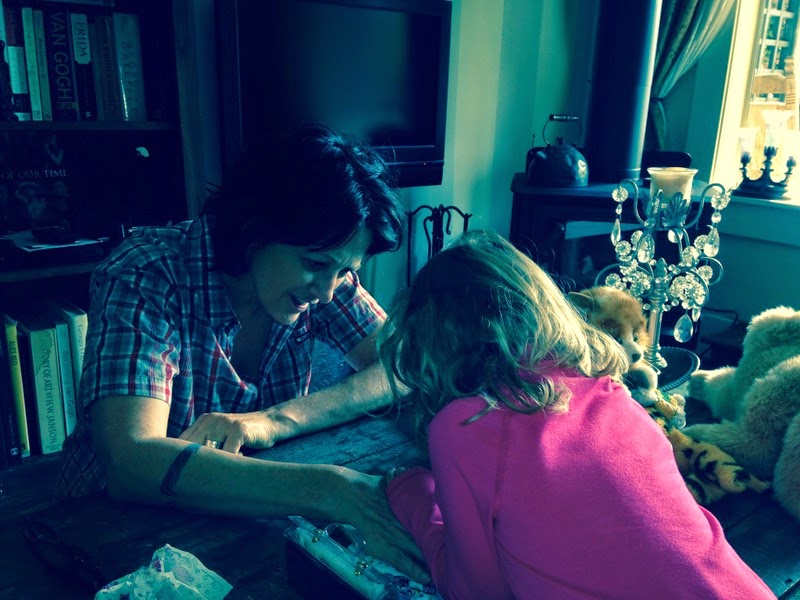 Coco had another sleepover with her aunts recently.  She did their nails because Coco is convinced she's good at giving manicures. (She isn't.)  The worst part is when she blots your still-wet nails with a napkin and tells you "It helps them dry faster" when you protest.  Then you have to spend the next week walking around with pieces of napkin stuck to your nails because if you remove her manicure, so help you God, she will glare you to death.


I volunteered to work the Prize Booth at the elementary school carnival last night.   That's a brutal job, especially at the end of the evening when all the kids swarm the prize booth to redeem their tickets for prizes.  I'm well suited to that kind of chaos for some reason (it's because I'm raising Lucien).  I can usually roll with yelling and jostling kids but this event stretched even my limitations.  I lost my voice halfway through and needed water so badly I began grabbing the wrists of friends as they passed and croaking, "water....please..." in a hoarse voice that frightened them.

Alex eventually joined me at the Prize Booth.  If I'm well suited for that kind of work, Alex is born for it.  He immediately morphed into a carnival barker.  He held up crappy toys, declared them the "must-have toy of the carnival" and then held an auction for the hot ticket item when the kids started fighting over a toy they weren't interested in five seconds prior.  Alex cleared the prize table of a lot of crap with his wheeling dealing methods. 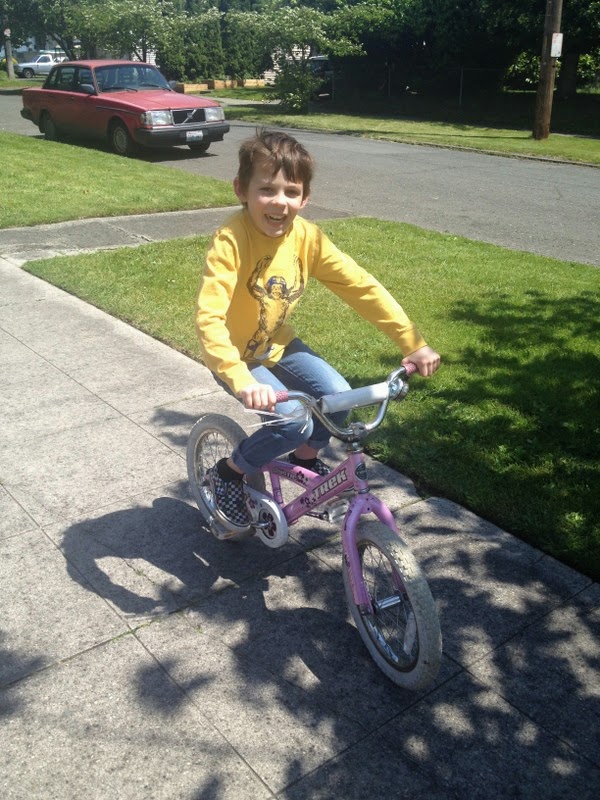 Some big news around here is Lucien finally learned how to ride a bike.  He's resisted learning to ride a bike for years, always told me he was happy with his scooter and didn't care about bikes.  I would tell him bikes are faster than scooters but he never believed me.  He would then challenge me to a bike/scooter race down the sidewalk and would always win because he has less concern for smacking into the many pedestrians on that sidewalk than I do.

The turning point was a sleepover at a friend's house.  His friends wanted to ride bikes but Lucien told them he didn't know how.  So his friends -- two on either side of the bike and one standing in front yelling directions and encouragement -- taught him how to ride in about five minutes.  He took off around the block and hasn't gotten off the bike since.

Maybe I can convince his friends to teach Lucien how to tie his shoes, too.  All I get on that is, "Meh, just keep buying me these kinds of shoes" as he points down to his slip-on Vans. 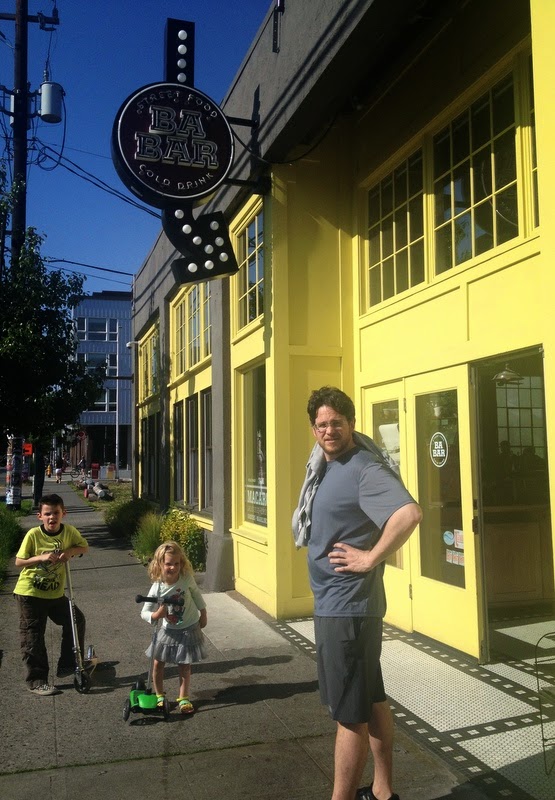 I played a game of chess with Lucien this evening.  I had him cornered and said, "checkmate."  Lucien then grabbed his king and, arm stiff like a windshield wiper, wiped all the remaining pieces off the board while yelling, "Oh my God, my king's gone crazy, what is he doing, I don't know what's going on!"  He then ran out of the room and up the stairs into his bedroom where he locked the king inside a storage bin.  He still claims I haven't won the game.

I texted the chess story to Alex, out for drinks at the time with his old European posse who are in town for a work meeting.  Alex relayed the story to his friends and the German guy responded, "I think that's how the French won all their wars."