Lucien just walked up to me and said, "Hey Mom, I think "Ukraine" sounds like a do-it-yourself crane company, kind of like U-Haul, only no hauling and with cranes....." and then he walked off to continue thinking deep thoughts. I'll be damned if he isn't right. Why did I never think of that before.

The Loosh has also become interested in horror movies recently, a development that could possibly be genetic. I grew up on horror movies. It wasn't exactly my choice, my family just likes them, my brother especially. It may not be normal to grow up with The Shining and The Amityville Horror playing on the regular in your TV room but I must say, it's raised me to anticipate many of life's terrifying calamities, like serial killers and vengeful demons and zombies and killer clowns.

I am just now considering that watching many horror movies as a young person may be a root cause of my terrible adult anxiety. Sorry in advance, son.

I started Lucien on the classics, primarily Hitchcock films. Our first foray into mother-son horror movie nights (while Alex dangled shiny objects in front of Coco in another room because she was pissed off not to be invited to scary movie night) began with The Birds. An hour into the film, Lucien turned to me and yelled, "Mom, WHERE ARE THE GODDAMN BIRDS?" He's got a real potty mouth these days, that one, but I have to agree classic horror movies move agonizingly slow by today's jump scare standards. There were no birds for a long, long time. Then there were lots of birds. Then it was over.

I also took The Loosh to see A Quiet Place in the theater that weekend (as Alex grew increasingly frazzled trying to entertain an increasingly pissed off younger sibling who doesn't like to be left out of anything, ever) and we both agreed that movie is pretty perfect. We've also watched Get Out. Lucien quickly picked up on the racial themes of that movie but I wasn't surprised. He's pretty socially aware, is the kid who said about his sister's Barbie TV show, "You shouldn't be watching this, it's pretty much the complete dismantling of feminism" and Coco responded, "It's not up to boys to decide what is and isn't OK for girls to watch" and I like them both so, so much. 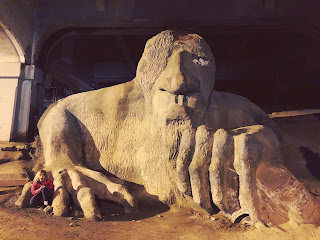 The Fremont troll clutches a VW Bug in one hand and a child in the other.


In keeping with our current family horror theme, we did a "murder mystery dinner" at a friend's house recently. We were all assigned characters beforehand and had to come dressed as our character. My character was a jazz singer/contract killer in 1930s Chicago. Alex was a golfer who wore argyle socks pulled up to his knees. We arrived to many other festively dressed friends and immediately got down to business determining which of us was a cold blooded killer.

I am not an auditory learner so all the information sprung on us in the beginning of the evening did not seep into my consciousness even a little bit. It just went in one ear and out the other, no way I'm keeping all those dates and train schedules and relationship triangles straight. I spent most of the evening whispering to "Silky," the mysterious brothel owner and bootlegger to my right, "What the hell is going on?"

During the course of murder mystery evenings, you have to ask many questions of other players to uncover the killer. You also must ad-lib when people ask you information about yourself you do not want to reveal. I am not great at thinking on the fly, which is why, when asked where I went all those nights I left my jazz singing job early (I was out killing people with my Tommy Gun) I replied, "My mom has been very sick. With leprosy. She has only two toes left" and when asked how I made all my extra money to afford my extravagant evening gowns, I said I sang at birthday parties and bar mitzvahs, picked up the odd babysitting job, and mowed lawns.

As the night went on and I lost the plot more and more, I would usually answer, "I dunno" and occupy myself with errant threads on my dress. I now know I am not good at these kinds of games and bow in respect to friends who were able to weave believable responses on the fly. Though I now suspect they are always lying to me in our daily lives.


In big summer news, this year I will cross an item off my bucket list. To anyone who's met me or read much of this blog, they know I'm a roadtrip enthusiast. I love crafting roadtrip itineraries, the bigger the better. We've done many through the Western United States, one through Costa Rica, and our most recent was through Mexico.

Those were easy trips compared to the most recent endeavor. This year we're doing the granddaddy of them all, the Holy Grail roadtrip for RV owners, the one that makes people hesitate slightly before responding "I don't know if that's awesome or scary" upon hearing our plans. (The answer is "both.") 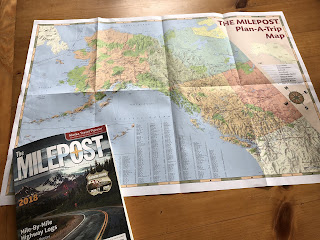 We are driving to ALASKA.
(the real Alaska, not Roslyn, WA)

This will be my finest success if everything goes well, and my worst failure if we get a flat tire in the middle of the Yukon with nobody around for a hundred miles.

Alex and I have been busy prepping the Winnie B for the trip and unfortunately discovered we have a water leak behind one of the walls. It's likely a cracked pipe, a vexing result of our disastrous frozen winter camping attempt at Sun Peaks back in February. We're scrambling to get it fixed before our planned departure date at the end of June but RV service places are jam packed with people itching to ready their rigs for summer trips. If we can't get it fixed in time... well I'm going to need to process it at length if this trip has to be cancelled.

We are crossing our fingers and moving ahead with plans. I've prepped the children for the Alaskan wilderness adventure by showing them Into The Wild and Grizzly Man. They are now very scared to get anywhere near a car with me at the steering wheel. 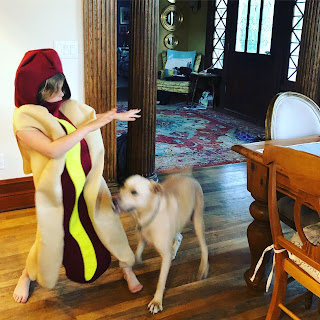 And Coco has been dressed as a hot dog for two days.

Yukon. U-kon.
U-con.
It's a do-it-yourself company for murder mystery dinner parties.
MJ
Posted by MJ at 10:44 AM 6 comments

We spent a long weekend at Suncadia with friends at the tail end of Spring Break. One of those friends put the wrong kind of soap in the dishwasher, squirted liquid dish soap into it instead of the stuff made for machines. Our friends are a smart and savvy group of people but when we all get together, it gets kind of chaotic and we're often just trying to get through the day without somebody ending up in the ER. "Details" often become "details schmetails." 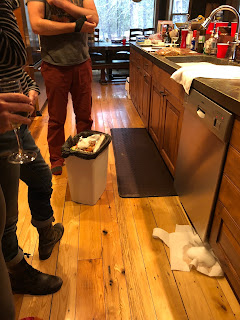 Here come the happy little bubbles
escaping out the bottom
while we all stand around staring at it. 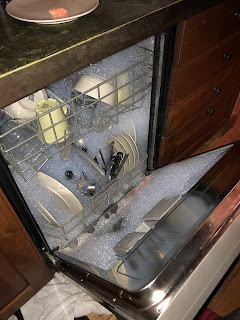 The adults said "shit" but the kids said "cool."

My search history for our time in Suncadia reads as follows on my iPhone: "wrong soap in dishwasher" followed by "squawking sound coming from refrigerator" followed by "what is Supertramp's greatest hit" and that is a surprisingly good summary of the weekend.

Suncadia is a resort community outside Roslyn, Washington. Roslyn is a textbook "sleepy town" whose claim to fame is being the filming location for the '90s TV show Northern Exposure. The show is supposed to take place in Alaska but that was a TV falsehood, it is downright Washington around here. 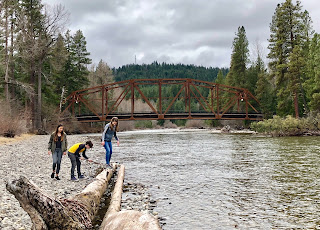 There are no moose in Roslyn. The famous shot of the moose in the Northern Exposure opening credits was created, so we're told, by "borrowing" a moose, building a fence around the entire town, and letting the moose wander around. And wander he did, straight past The Roslyn Cafe at one point, a business that still exists, which straight up told the audience they weren't looking at Alaska.

Our group took a few hikes together during our days in Suncadia/Roslyn, including this one where we went offroad and walked 'round and 'round in the forest somewhat disoriented, joking nervously about how no one had come prepared with backpacks, bottles of water, food, that kind of basic hiking survival stuff -- What are we even doing?
Buncha city people
wandering around with no trail and no water.

Again, details schmetails. We had been grateful just to get everyone out the door and into cars and accounted for at the trailhead.

It's no joking matter with these people, really, we should have been better prepared. These are the same people with whom we have weathered intense windstorms, terrible injuries and disgusting hot tub rashes. We should be careful when we're together. There is something about the energy we put out into the universe that makes the universe want to do things to us. 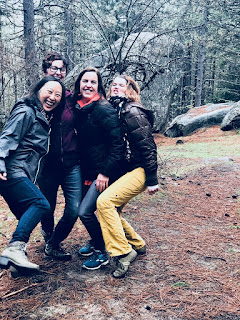 Looking at this pic, who can blame it?
We're just begging to be taken down a peg. 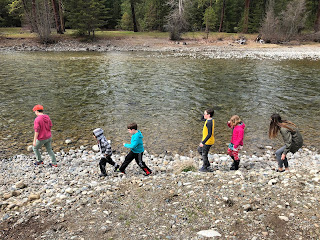 It's like The Beatles crossing Abbey Road but more Twilight-y.

Since our older kids are capable babysitters now, we left the mess of kids (or is it a tangle of kids?) at the house with some mac-n-cheese and went out for grown-up dinner in Roslyn.

We went to the town tavern, The Brick, after dinner to play some shuffleboard. The Brick is rumored to be the oldest operating tavern in our state, established in 1889, but we were more impressed with the unabashedly phallic sign out front. 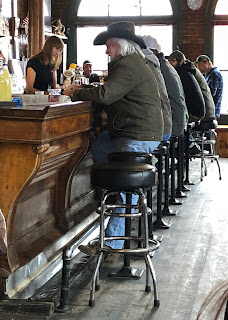 These water-filled floor troughs were originally installed for tobacco spit but soon enough men began using them to relieve themselves pee-wise so they didn't have to get up from their stools. I think it was a wise decision the TV people focused on the moose and left out the piss trough for the Northern Exposure opening credits. 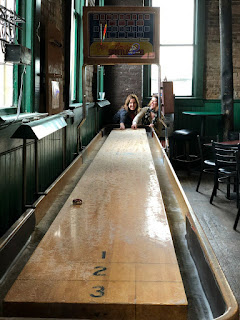 I wonder what gross secondary use they devised for the shuffleboard.
Likely butt exfoliation.

Alex went back to Mexico City for work soon after our Suncadia trip. I took the kids to another area of Washington while he was away, the northern part, where tulip fields bloom like Holland in the Spring. It's quite a draw for the people of our state -- such a draw, in fact, the kids and I had to wait in a car line for over an hour just to pull into the parking lot from the main road We all agreed it was good Alex wasn't with us at that point; he would have lost his damn mind because the man has no patience for sitting still. 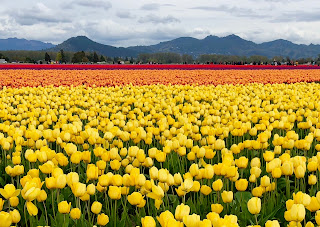 The tulip fields are gorgeous, like paintings come to life plus hundreds of tourists. I tried to take nice pictures of my children but they soon made it clear I'm never going to have a normal picture of them ever again. 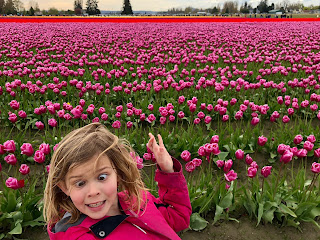 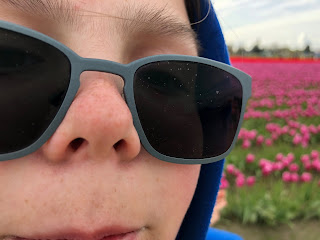 Sometimes I would think I had a good one of both of them smiling at the camera only to zoom in and realize Lucien was giving me the middle finger. I am really enjoying the age of 12. 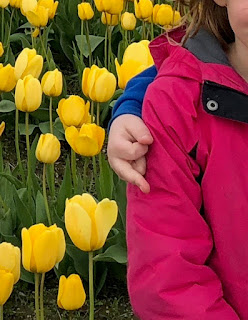 whoomp, there it is.


Unabashedly Phallic would be a good name for a band.
Seems fitting for heavy metal,
but would be funnier for a classical string quartet.
MJ