Welcome to this side of 2015.  With the holidays behind us and our Christmas tree lying pathetically dry and alone on our front lawn, I decided to check back in and tell some stories of our holiday season. 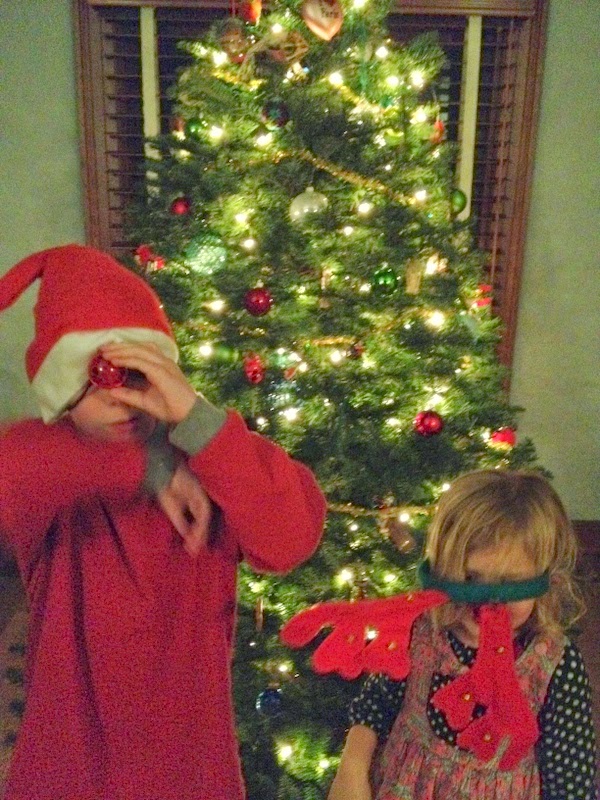 Guys, please, can I just get one good picture in front of the Christmas tree?
No, mom, you can't.

First, a weightlifting snafu.  Alex lifts weights in our basement -- a truly admirable thing given the terrifying nature of the space.  Our basement is claustrophobic, maybe 100 square feet, with low ceilings and damp concrete walls standing three-quarters of the height to the ceiling.  The remaining quarter, the space between wall and ceiling, is a void.  It's a deep dank abyss into which you cannot see but from which you can occasionally hear a faint rustling.

What I'm saying is the basement sucks and I avoid it as much as possible.  I thought Alex was nuts as he carefully, piece by piece, carried his weight set into the basement.  He brushed aside thick cobwebs and whistled cheerfully as he assembled.  Unbelievable.  I'd rather pump up my muscles naked in the front yard with a camera crew present than spend time in that hellhole.

I'm a supportive wife, though, so whenever Alex needs a spotter for a weight-lifting session, I descend the wobbly narrow stairs agreeably.  I've done this dozens of times without incident, for the record.

This time we were both off our game.  The first set went fine but the second set quickly went to hell.  Usually when I spot Alex, I only have to apply a small amount of force to the weight, just enough to help him get his arms back under it again.  This time, though, he fatigued earlier than usual and I wasn't ready, wasn't quick enough on the draw.  The weight bar came down on his chest, with all of the nearly 200 lbs attached to it, and there it stayed.

I panicked as he turned red in the face.  The bar was so tightly pressed to his chest, I couldn't get my fingers even a little bit under it.  Even if I could have, I cannot lift 200 pounds because I'm not an ant and cannot lift two of myself, especially while in a bent over and panicked position.  I settled for screaming in Alex's face instead.

We should have practiced this scenario beforehand.  I could have run around to the end of the bar and pushed it up and off him.  Instead we did the worst thing and began rolling the bar down the length of his body.  As it rolled over his ribs, it did some damage.  He finally wiggled out from under the thing and eventually, after what seemed like forever, stopped yelling, "OWW! OWW! OWW!."

He's on the mend but is still walking around the house moaning and clutching his torso.  He's also telling everybody within earshot his wife tried to kill him for the insurance money.


Aside from that disaster, we also had a squirrel poop snafu.  Coco and I sat outside her preschool one morning waiting for it to open.  It was a gloriously sunny day so Coco asked me to open the sunroof.  I did and soon thereafter a couple things hit me on the head and bounced into the open hood of my jacket.  At first I thought, "Oh! Some delicious berries!" and reached back into my hood.  I very soon -- and yet way too late -- realized I was handling squirrel poop.  I threw the poop out the window and ran into Coco's school, begging to be let in early so I could wash my hands because, well, poop.

I guess the lesson is don't park under a tree with the sunroof open.  And if you do, don't wear a hood that can serve as a squirrel poop receptacle.

Then there was a tequila incident.  We were invited to a tequila tasting at a local bar by some friends. Alex and I were starving upon arrival because we'd forgotten to eat for hours.  We were greeted at the table by an enthusiastic group of people and seven bottles of tequila.  Alex turned to me and said, "Seven shots of tequila on an empty stomach.  I'm sure this will end well." 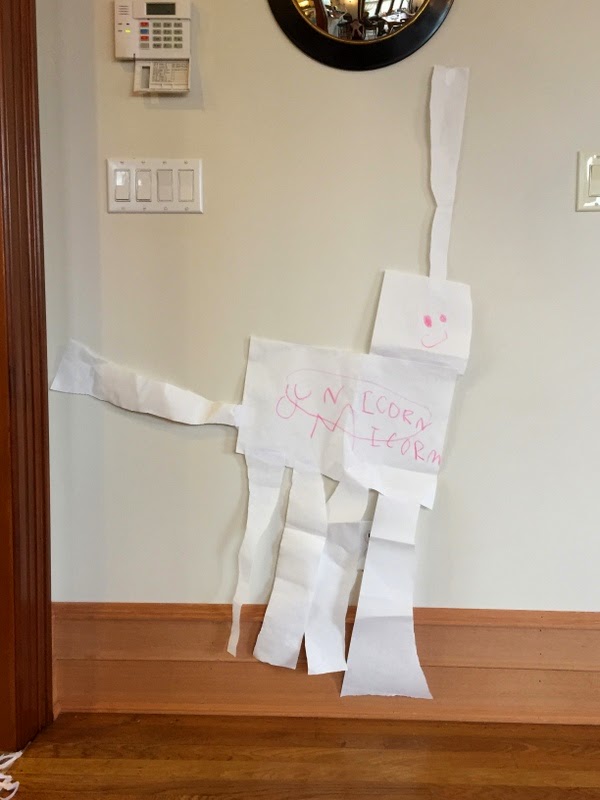 here's a unicorn Coco made out of some paper

After much grumbling, all the other guests left except us.  We decided to stay because the kids were occupied and happy, there was free WiFi,  and Alex and I needed a block of time to work on the final versions of our official wills.  It seemed reasonable to stay put.

Five minutes later the birthday girl walked through the door with her frazzled mother and little sister. The mother said they had waited in line forever to get the birthday cake and were therefore late to their own party!  Then she asked where everyone was.  Alex and I froze, looked at each other with wide eyes.  It was an epic miscommunication involving so many people.

Alex and I have many faults but one thing we do well is can-do attitudes.  We told her it was OK! We were going to have a great birthday party right there, so private and intimate, and won't everyone else be sorry they gave up so early and left.  The mom started to cry anyway.  Then the little sister decided to practice her reading skills in front of Alex's laptop screen.

As the mother cried, the little sister read aloud our intentions should Alex and I die.  She read (she's a super good reader, little devil) all about who gets our kids should we both bite it at the same time and how to divide assets if we die and our kids die and everyone is dead.  It didn't help the birthday party get off the ground, in fact gave it a rather somber vibe.

Lesson to learn -- if you hear a birthday party has been cancelled, get the hell out of there. Whatever you do, do not start working on your last will and testament.  It is not the convenient time you believe it to be.

Christmas happened.  I knew I was getting sick as I prepared my pork tenderloin for Christmas Eve dinner. Not just getting sick, but going down really really hard.  I hit the couch to sleep and Alex, confused by the pork tenderloin laying phallic-like before him on the counter, ordered Italian take-out for dinner.  It's not the way I pictured spending our last Christmas with both kids semi-believing in Santa Claus.  (The jig is already up with Lucien and Coco has been naturally skeptical of  The Man in Red since she was born.)

I stayed coherent long enough to play Santa.  I had to, it was my last year.  Setting out the milk and cookies made me gag so I laid on the floor for a minute, motionless.  Usually I eat the cookies myself but this year I weakly fed them to the schnauzer.  Oscar was delighted to take advantage of my illness, little jerk of a dog.

Christmas morning I managed to bake the sausage strata, start the coffee and pour the orange juice (when moms get sick they still get sh*t done, you see),  I then collapsed on the couch while my family opened presents around me.  I don't remember much about it.  I think the kids liked their new bikes?  At least for a minute they did.  They went outside to try them on the sidewalk and within thirty seconds Lucien flew over his handlebars. Brand new brakes are touchy. 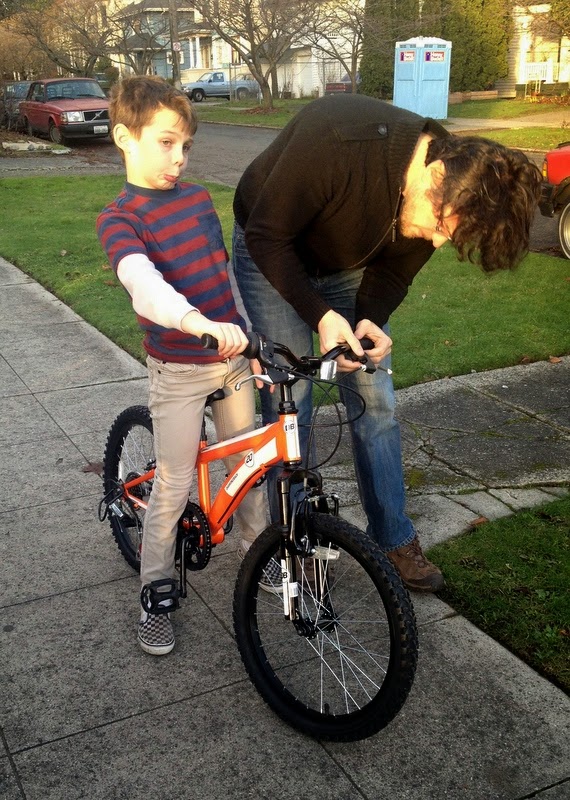 seconds before it went wrong


It's time to focus on things that are going well and make me happy.  One is the fact I'm friends with the guy pictured below and he showed up at my house unexpectedly to wish me a Merry Christmas. His two passions in life are antiques and rebuilding cars so he was driving this -- 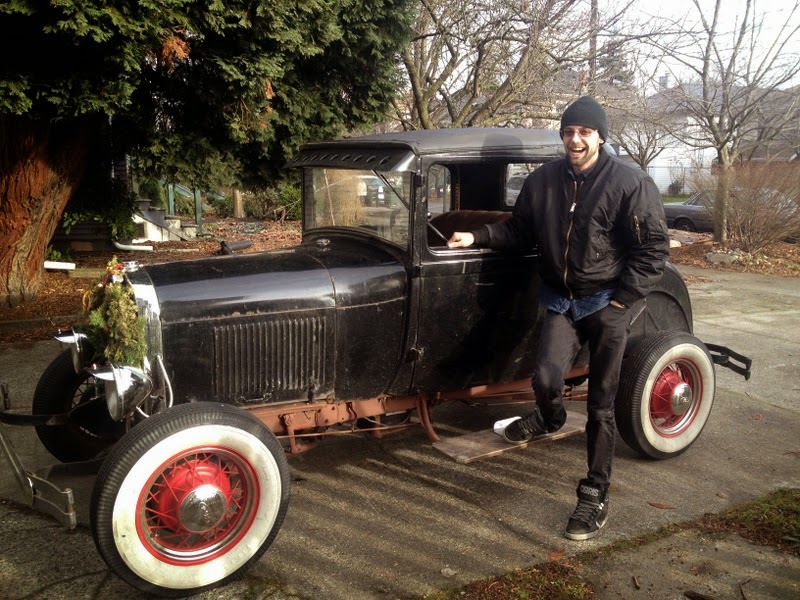 The return of the prodigal Dan the Man

The other is my family.  My parents and brother came a week after Christmas to celebrate "late Christmas" and to attend the opening of Raba and Zee's play, A Streetcar Named Desire.  Raba and Zee have started a new theatre production company and for their first outing, it is spectacular. 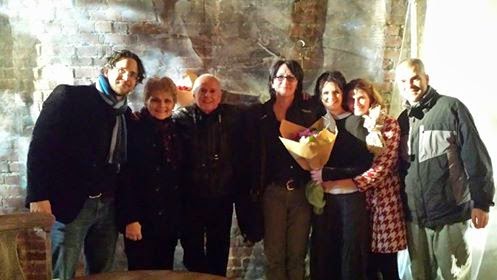 Raba is playing the role of Blanche. She's painfully good.  The reviews of the play, and her in particular, are glowing, raving, and well deserved.  My heart ached watching her up there, slowly unraveling, slowly and brutally being betrayed by everyone around her.  Streetcar, you are such a cruel bitch of a story.

And finally, our Seahawks.  I won't rehash the NFC championship game; if you like football, you already know the details and if you don't like football, you'll skip over them anyway.  It is enough to say it was the greatest comeback in the history of anything, ever.  A game that seemed impossible to win (and had all of our guests silently nursing their beers with somber faces) was won in spectacular fashion in the last few minutes. Then our guests were spilling beer everywhere because of all the jumping and yelling and hurling ourselves into each others arms. 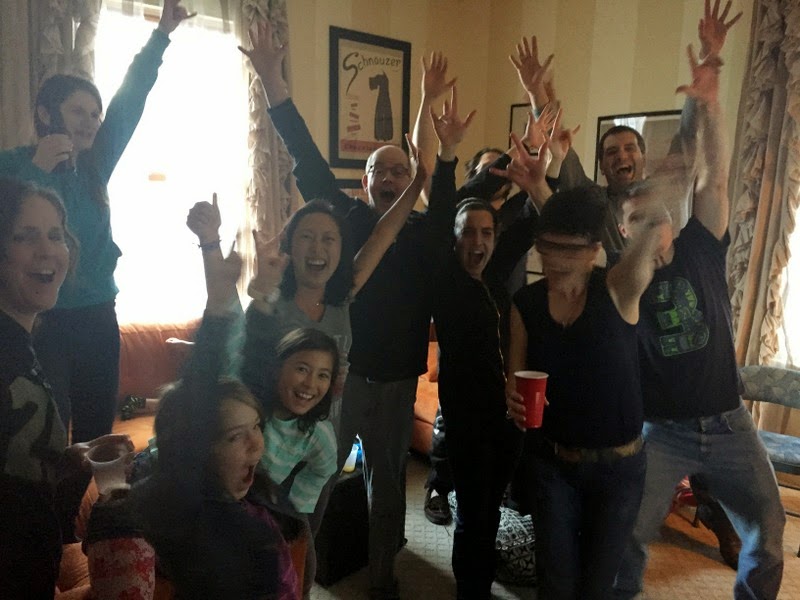 Seahawks never say die.
(or is that The Goonies...)


I, too, have always depended on the kindness of strangers,
MJ
Posted by MJ at 1:36 PM 9 comments