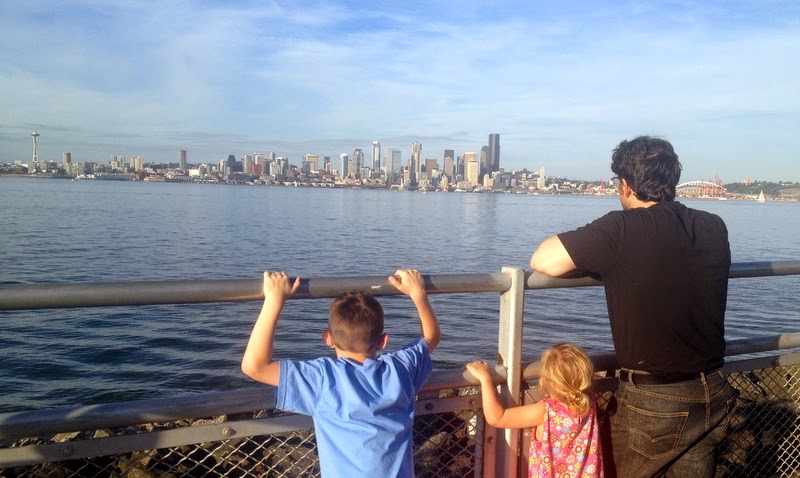 I didn't intend to take the summer off from the blog but I seem to be doing exactly that.  I don't have any good excuses for doing so.  I haven't jetted off to some remote vacation locale nor have I become Supermom and spent every precious summer moment doing arts and crafts with my kids.  Trust it, I have not come close to doing either of those things.

No, there's just something about this summer that's made me lose the desire to do anything. Part of the issue is our relaxed summer schedule, up an hour later than usual and moseying to the car instead of sprinting because who the hell cares if the kids are late to summer camp. 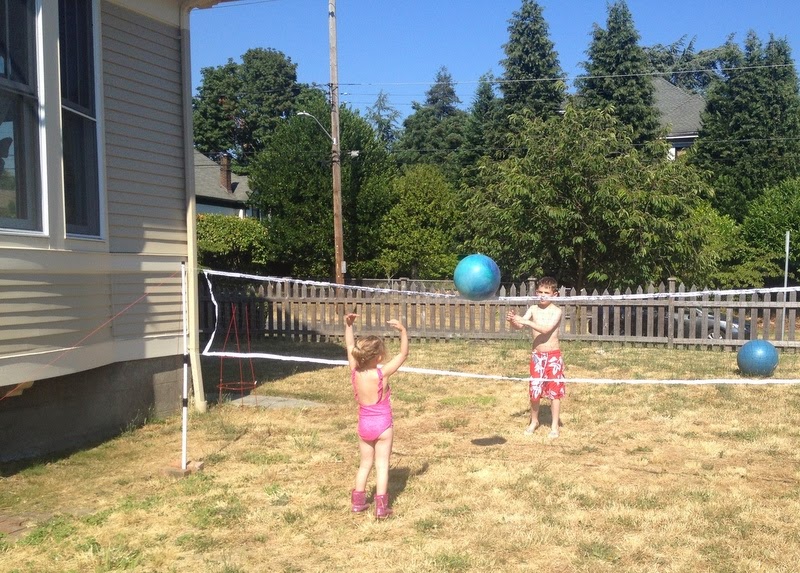 Part of it is the ever-changing nature of that same relaxed summer schedule.  Every week looks different; there are no more constants. I'm a creature who craves predictability so the shifting schedule has given me an off-balance paranoid vibe. I stare at my calendar often and give myself pep talks. I know I'm about to let something fall through the ever changing cracks and I'm rarely wrong -- so far we've missed speech therapy twice, t-ball practice once, drove to the wrong camp once and left lunches in the fridge at home dozens of times.

The other issue is our new back deck.  I install myself out there in the shade of the morning with a cup of coffee.  My intent is to read the newspaper then stand back up and go about my day.  But once the sun peeks up over the top of the house, it begins to bake me to an uncomfortable degree and I go limpy, newspaper discarded, arms dangling off the sides of the chair, sweat pooling in various places on my body. The sun saps me of energy and strength.  It's a good thing I live in Seattle and only have to deal with that damn thing a handful of months out of the year. 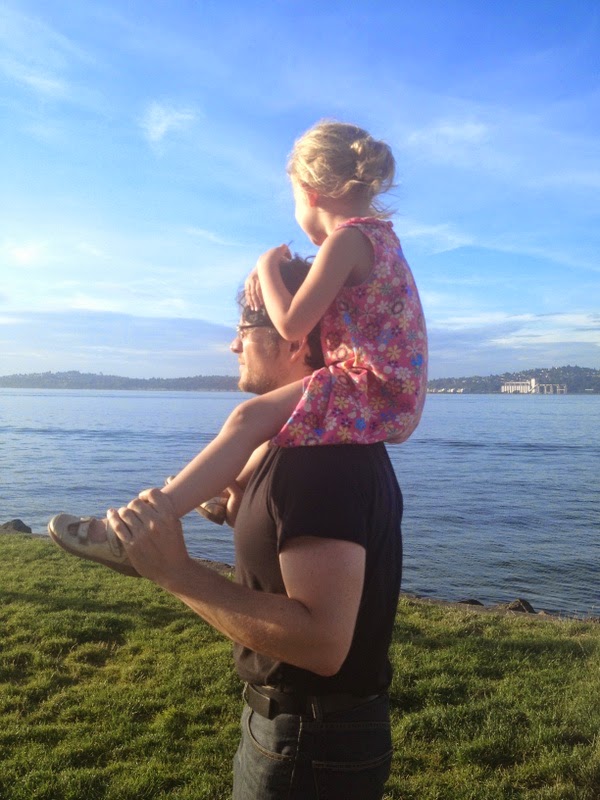 Coco is playing t-ball now.  Four-year-olds playing t-ball is an exercise in confusion and chaos coupled with unbridled joy and random enthusiasm. Parents must be stationed at all bases and must constantly wave their arms and direct the children where to run; otherwise the vast majority skip first base entirely and charge straight ahead to second or what the hell, some direction where there is no base at all. 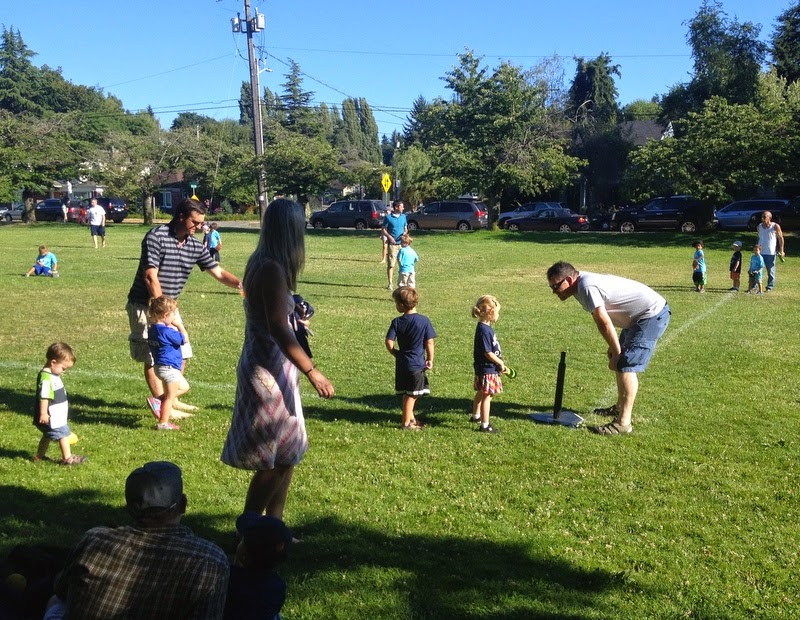 My personal favorite is when our entire team runs after a ball hit by the other team and fights over it in a writhing wrestling heap in the middle of the field.  The victor eventually holds the ball high over his/her head with a beaming face, yells, "Look! I got it!"  then inexplicably walks over and hands the ball to the nearest grown-up.  Meanwhile the other team is lapping the bases, usually out of order.

Four-year-old t-ball is a good show all day long yet we parents dread the practices and games.  I can't explain that.

Lucien and Coco both took swimming lessons this summer.  We enrolled in lessons with "The Swim Whisperer," a woman who holds small lessons in private residential pools around the city.  She's a treasure but takes no prisoners.  One kid in Coco's class refused to get in the pool so The Swim Whisperer walked over and just chucked him in.  The message was clear -- The Swim Whisperer doesn't f*ck around. 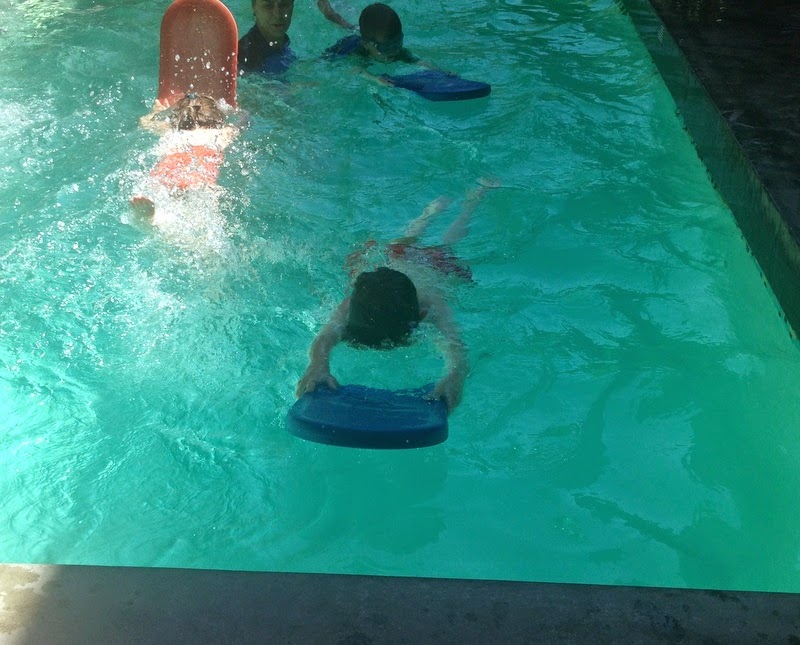 The biggest news of the summer is my sister got married.  Actually she was already married -- that happened months ago in the shotgun chapel saloon girl costume incident -- but this was the official version with friends and family.  I was her "special person" (best I can tell, that's Seattle lesbian wedding code for Maid of Honor) and therefore I had many important duties such as picking up the "gaybies" the morning of the ceremony.  I didn't know what a gaybie was but I was happy to be of assistance. 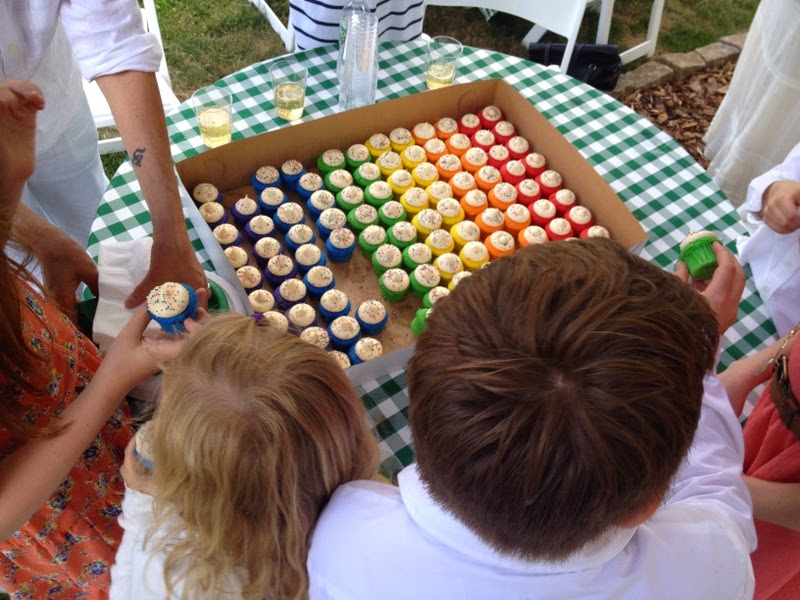 
It was a beautiful ceremony by the lake.  Raba and Zee are so happy.  We love them both and we love them together.  There can be no other way. 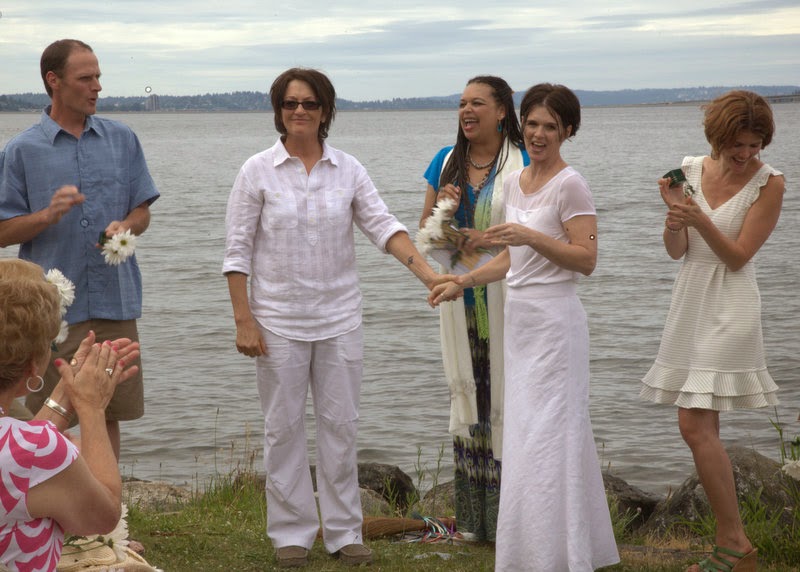 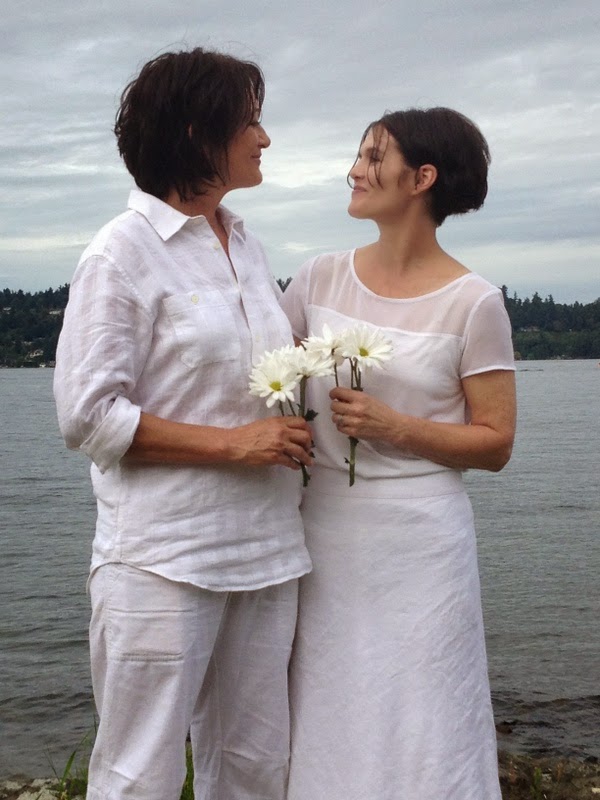 Raba and Zee's joy is palpable; it radiated throughout their wedding, rippled through their guests, and touched us all right in the hearts.  Except for Lucien, that is, because he was too busy.  Unbeknownst to me, Lucien stood behind me -- ME!  THE SPECIAL PERSON! -- at the ceremony and did stuff like this -- 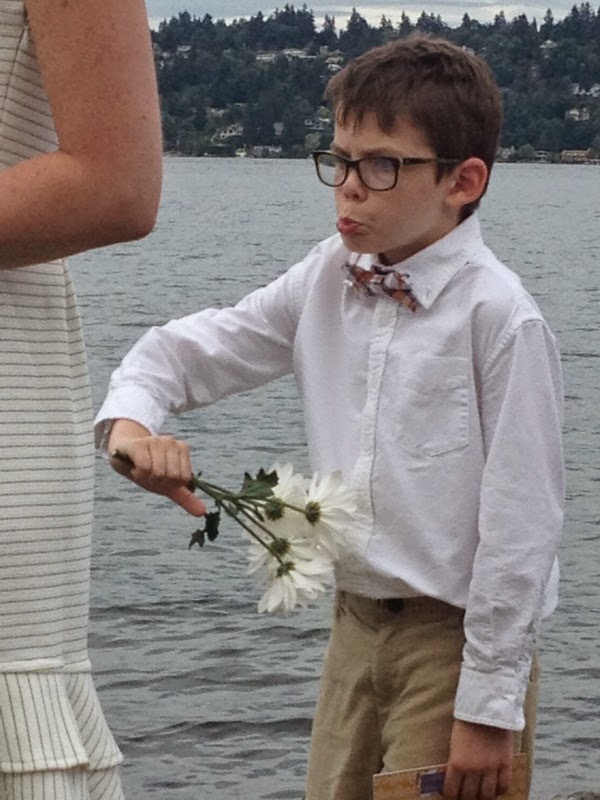 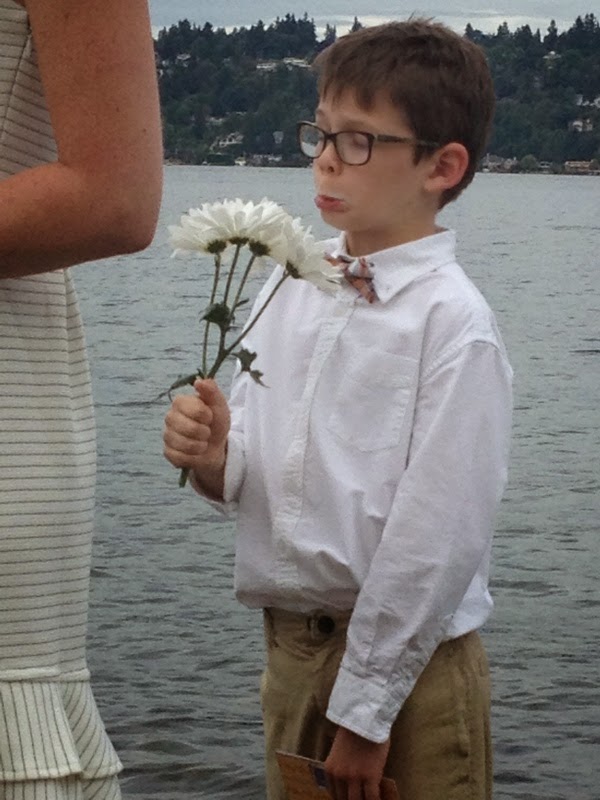 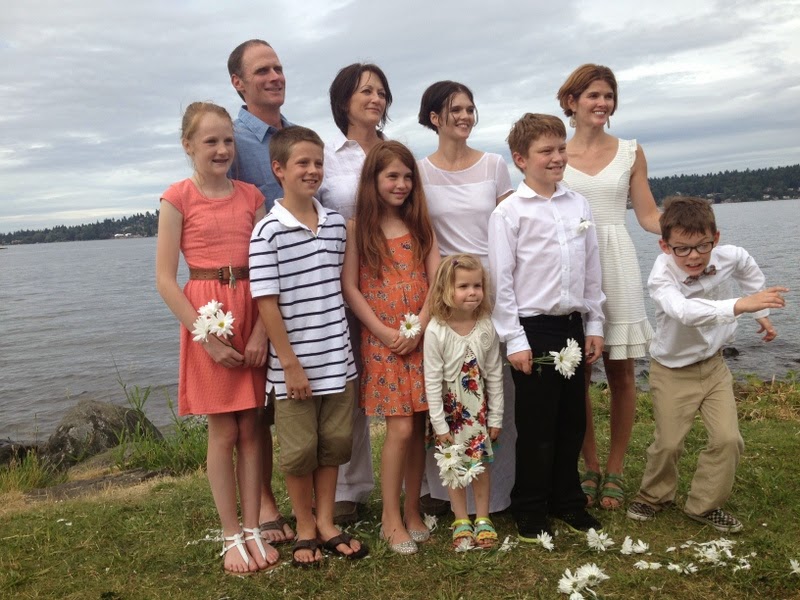 Oh my God, this child

Lucien read his quote from Maya Angelou at the ceremony with perfect speed, diction and projection.  He was also 100% himself as usual.  Bravo all around, son, you're an original and a keeper even if you gave me these permanent circles under my eyes. 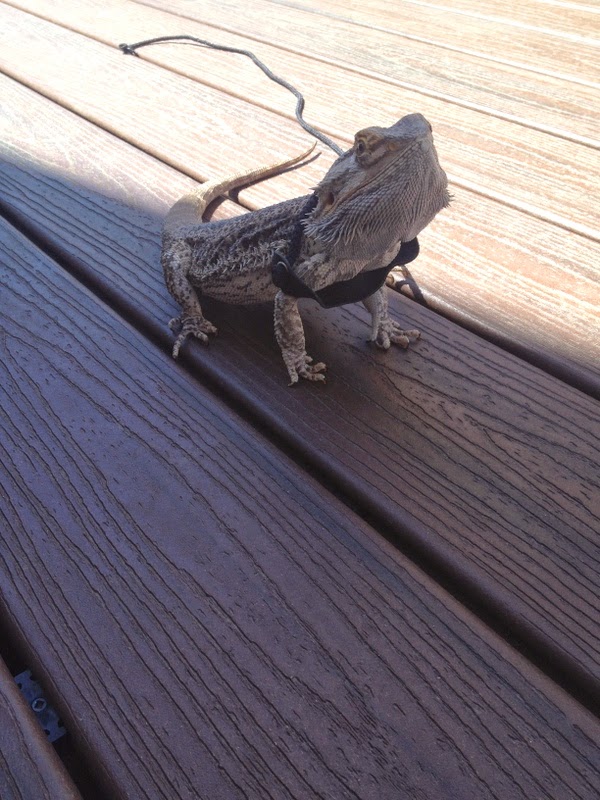 We put Bobo the Bearded Dragon on a leash and took him outside for a walk.  We thought he would enjoy soaking up the hot sun rays because his previous owners assured us he did indeed enjoy this but he didn't appear to enjoy himself at all.  He froze. If anyone came near him, or made a noise, or a breeze blew across his back, he puffed his beard and emitted a low steady hissing sound.  Our docile little animal had gone native and we were terrified of the little f*cker for a minute there.

I moved very slowly towards the end of the leash, planning to gently lead him back inside where I could put him back in his tank and mark the outing a colossal failure.  Bobo had his own plan, though.  He wasn't going back inside.  He was going to escape from the bastards who tied a piece of string attached to a leather harness around him, which by the way made him look like a lizard who enjoys light bondage.

The second I pulled on the leash to lead him inside, he bolted in the opposite direction towards the street.  He struggled so valiantly against the leash he managed to wiggle his legs out of the leather harness. I watched the harness slip down his body and thought, "Holy hell, if he wiggles all the way out of the thing he's going to make a run for it and when I go after him he's going to bite me."  I panicked and pulled the leash tighter which resulted in the harness portion tightening around Bobo's back legs and tripping him.  He fell on his lizard face.

A few tense moments later, I had a dazed and confused Bobo in my arms and was running him up the stairs.  I dumped him back into the safety of his tank.  Lucien and I took a few deep breaths and looked at each other with wide eyes.  It's unlikely we'll ever take Bobo into the great outdoors again. 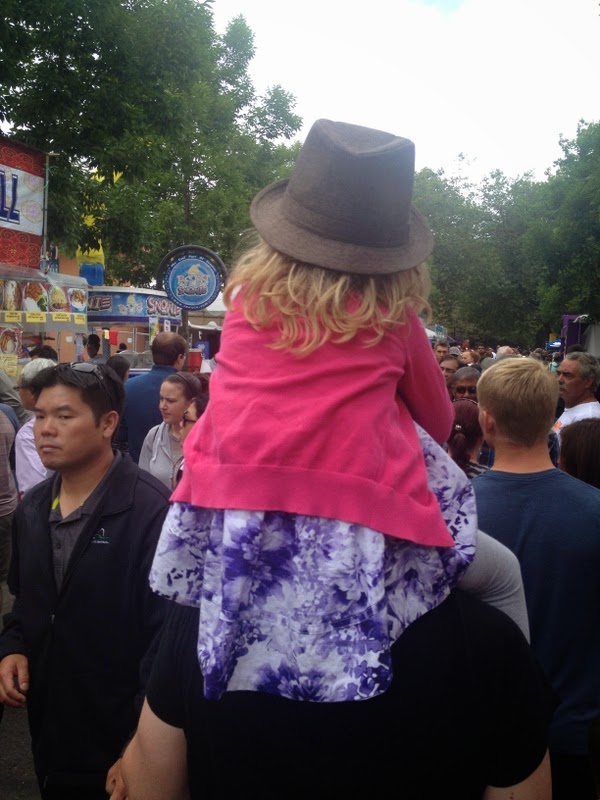 Coco has the best view at the Bite of Seattle 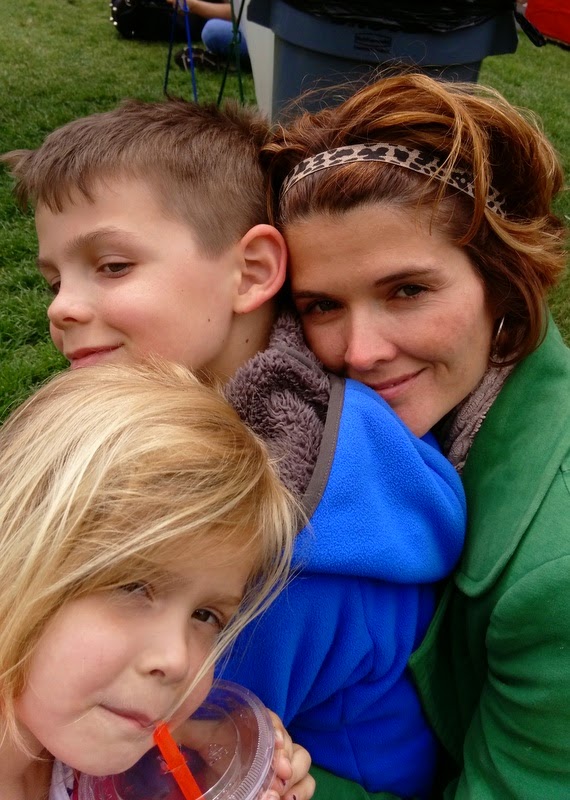 Our friends who live in Sweden visited this summer.  They came over for a "quick dinner" because that's all their busy visiting schedule allowed. Our "quick dinner" turned into a very long dinner with a lot of wine and ultimately led to this -- 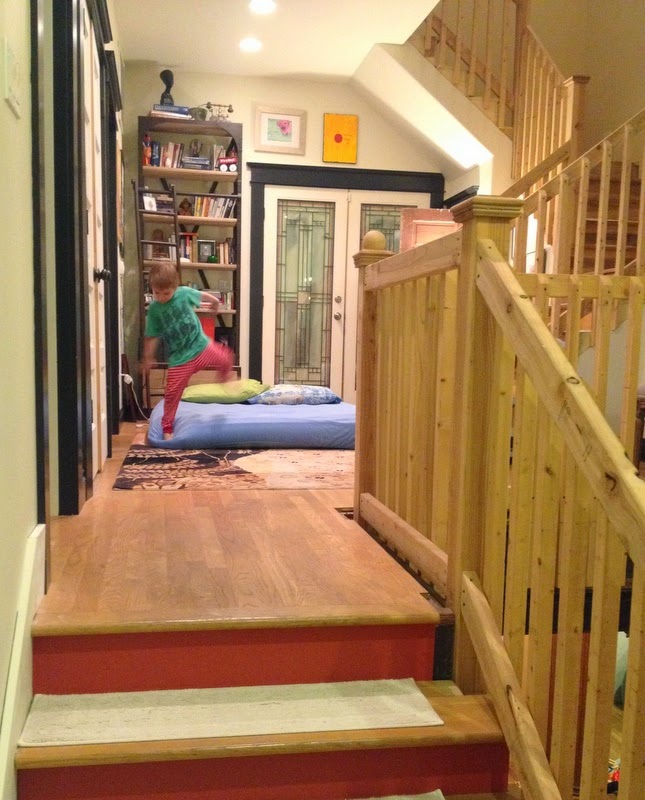 -- inflating bright blue air mattresses on the stair landing and finding clean sheets for the guest room for our friends and their three sons at 11:30 pm.  At this point the kids were maniacally hyper overtired and the adults were even worse behaved.  Impromptu sleepovers are the best; they're the kinds of events where you stumble into your kitchen the morning after, survey the wreckage of plates caked with food and warm glasses of beer still on the table and say sleepily, "Whoa..."  followed by high fives and "Thank God we're still fun."

Then you brew strong coffee and fry up some bacon and eggs before saying goodbye for what will likely be a very long stretch of time.  No matter, we'll still be good friends on the flipside.

As an aside -- all three of those little Swedish boys speak fluent English.  Our friends said that in Sweden, if a child has a parent that speaks another language they have a right to a private language tutor.  Their kids get private English lessons because their dad is a Seattle native, courtesy of the Swedish government.  Damn it, Sweden, why must you do everything so awesome?

Our Swedish friends emailed us upon returning to Sweden and said their middle son has been talking a lot about Lucien.  He said, "Lucien is so lucky.  He has three pets:  a dog, a bird, and a dinosaur."  I didn't mention in my response the "dinosaur" may enjoy light bondage and may hate my guts at the moment. 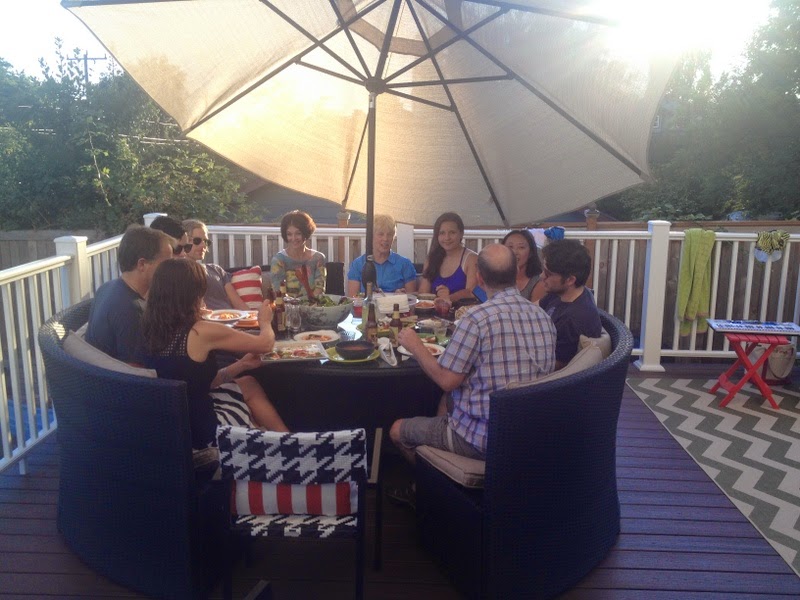 We had some friends over for dinner on the deck for Alex's birthday.  Alex made it clear he didn't want a birthday cake because he's low-carb these days.  He instead requested a cheese plate for dessert.  Like we used to do in Paris.  I stuck a candle in a delicious French blue and we called it a day. 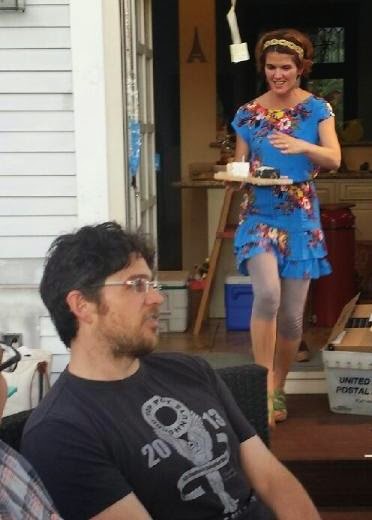 birthday cheese plate: a new tradition or something dumb that should never be repeated?

I'll be back here before school starts to post some more happenings of the summer.  Unless I don't get around to it.  Thanks to those who emailed to make sure we were OK --that's a glaring sign you've let your blog go a bit, isn't it -- we're all alive and well, just lazy and confused. 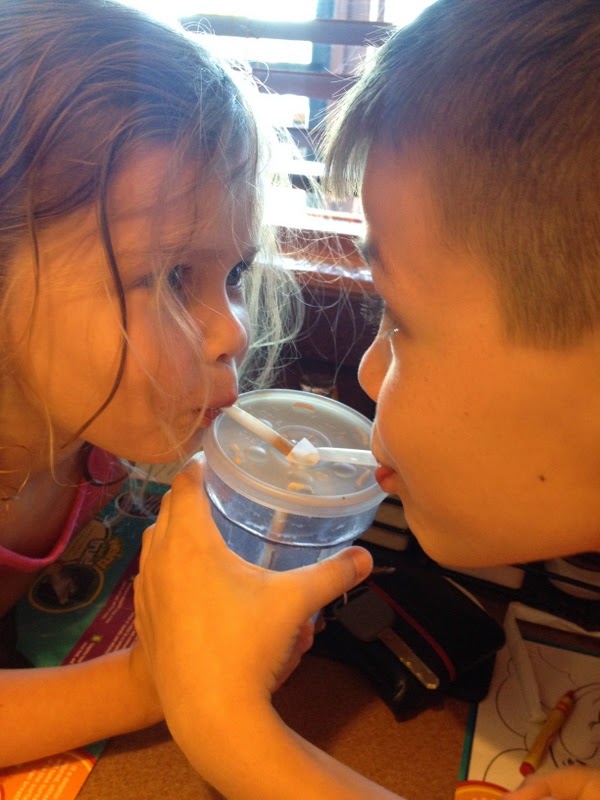