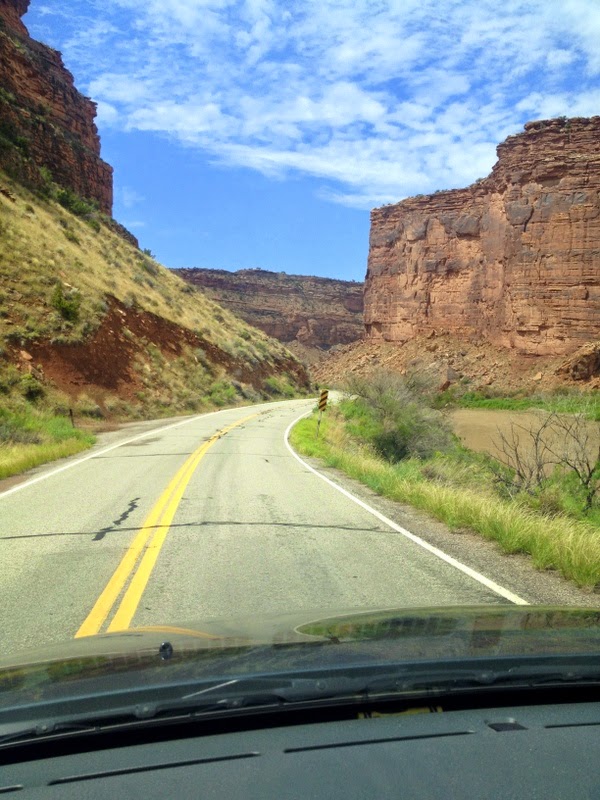 Summer is over so I'm back.  I hope I can reclaim my writing mojo after these months of neglect.  It was a lost summer in terms of blogging and book writing but it was a winner in terms of kids staying up late, dirt and bugs. Oh, and Minecraft.  Lots and lots of Minecraft.

I'll start with a quick update on the kids, just a few anecdotes to illustrate not much has changed, they are still very much themselves.

I asked Lucien to bring me my purse the other day. This is what happened when he handed it over:

Loosh:  "Mom, I found some sticky stuff on the bottom of your purse so I licked it."
Me:  (staring) "Lucien, why would you ever lick a sticky mystery substance off a purse?"
Loosh:  (shrugging) "I figured there's always a chance it's maple syrup!"

He's not technically wrong.  He also doesn't appreciate the overwhelming odds that sticky substance was bar sludge gathered when I sat my purse on a bar floor during our last Moms' Night Out.

I took Lucien to pick up some wood stain for the house and asked him to help carry the various cans to the car after we'd checked out.  Lucien looked at the cans and suddenly began waving his arms around and yelling in the small store: "Hey everybody!  Help!  Help!  My mom's trying to kill me over here!"

Isn't it wonderful that kid can still take me by surprise?  I whispered, "What the HECK are you DOING?" as all heads swiveled in my direction and beady eyes pointed at my face.  Lucien then pointed at the label on the can of wood stain, put a hand to his heart, and read aloud in a voice befitting the most seasoned of stage actors: "Warning!  Poison! Keep out of reach of children!"  Then he bowed.

Coco is doing well in her new preschool.  She now thinks she can write (false) so every surface in the house is covered in an indecipherable scrawl -- it's like a cross between a Picasso sketch and sanskrit.  I hate it when she hands me a piece of paper covered in the stuff and says happily, "Read it, Mommy!"  I start making stuff up but realize I'm veering wildly off her intended course when the corners of her mouth turn down and her eyes turn hard.  Then she usually grabs the paper from me in a huff and tells me I don't know how to read.

Coco has also begun to address audiences -- gathered several times a day for her meandering ballet and singing shows in our entry hall -- as "Welcome to my show, unicorns and gentlemen."  I asked her what happened to the "ladies" and she shrugged and looked unconcerned.  She did recently tell me she wants to be a unicorn when she grows up so perhaps the two are related.

My annual solo-parent road trip with my two young children happened last month.  I drove them to Denver, where my mom had recently undergone surgery to replace one of her knees with a titanium counterpart.  I felt perhaps I could be of assistance in the aftermath of such major surgery.  Judy may now be part machine but she and Dad could probably use help procuring groceries until she gets her bionic legs under her.

Very few people understand how happy I am to do these road trips with my kids.  Most people tell me it sounds like torture.  It's not even close.  It's a heart-swelling combination of my kids having strange conversations in the backseat, my favorite music blaring loudly, the open road with nobody on it, an incredible view and an 80 mph speed limit, and a bag of Nacho Cheese Doritos within arms reach at all times.  How can that be considered torture? It's euphoria!

Have I inspired you to round up some kids (preferably your own) and drive long distances? 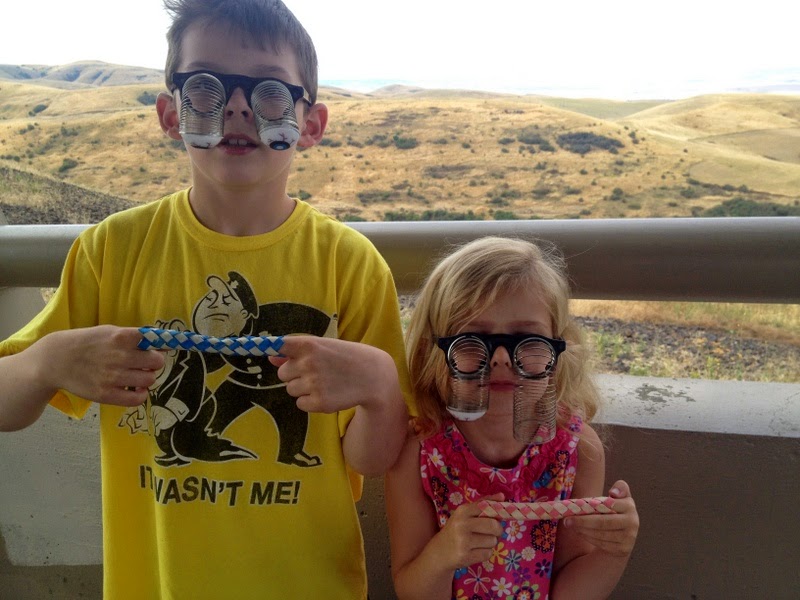 This was somewhere in Idaho.  Maybe Utah.  Hard to say.

I like to believe our time in Colorado was helpful or at least uplifting to my recovering Mama but I fear it was mostly exhausting.  Dad and I took the kids to a nearby skate park daily so Mom could rest.  Lucien ran into Coco pretty hard at the skate park at one point, knocking her off her scooter.  He apologized but as he scooted off again he yelled over his shoulder, "Ha! I'm awesome!" Coco dusted herself off, shook her head and muttered, "He's not awesome, he's dumb." 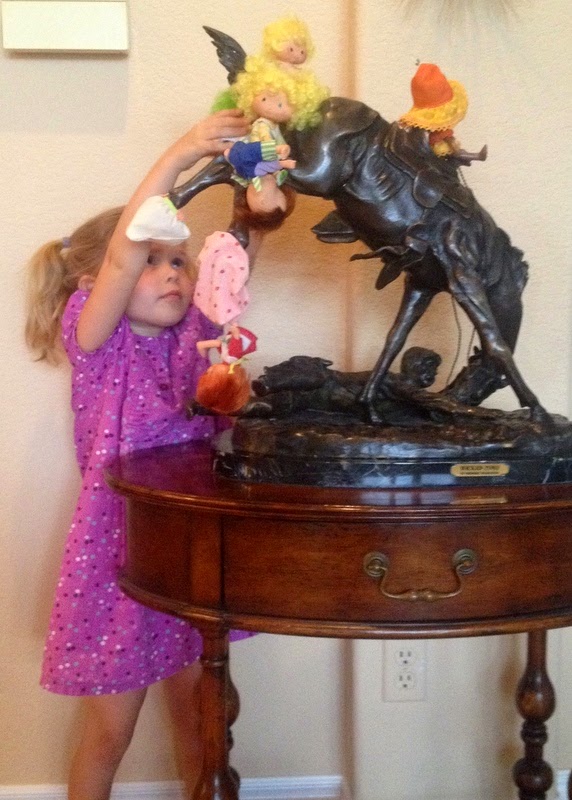 Coco gave all my old Strawberry Shortcake dolls a ride
on the Remington sculpture.
Some are faring better than others.

We took the scenic route home to Seattle via Arches National Park in southern Utah. 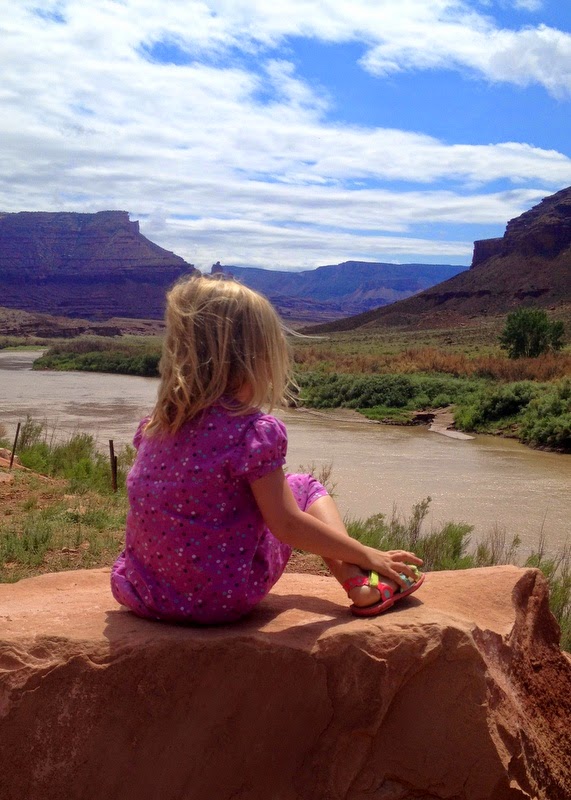 We were inside the park well before 7:00 am -- a result of having early riser children and in this case a total plus. Instead of sharing the arches with five million tourists, as usually happens when one visits Arches, we had the arches all to ourselves as the sun rose over them.  The kids and I scrambled around Sand Dune Arch, and up and down under Double Arch, completely alone for the better part of two hours.  It was some of my happiest time on earth so far. 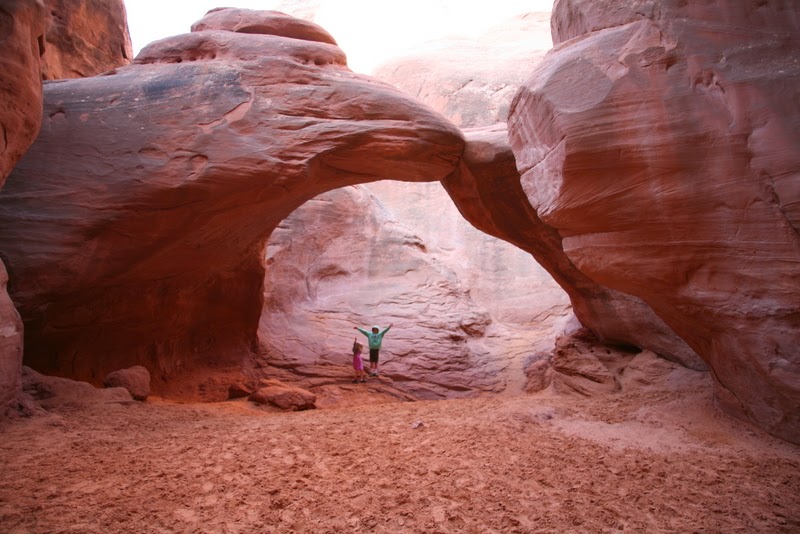 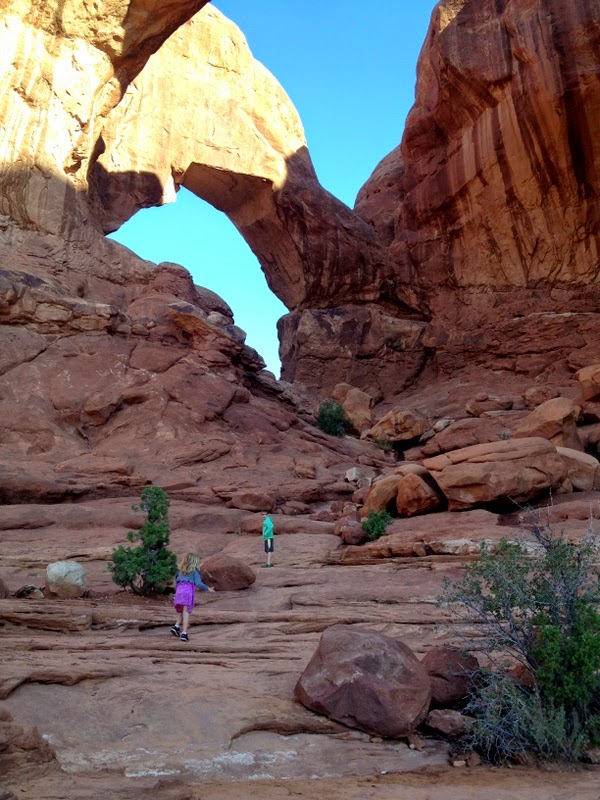 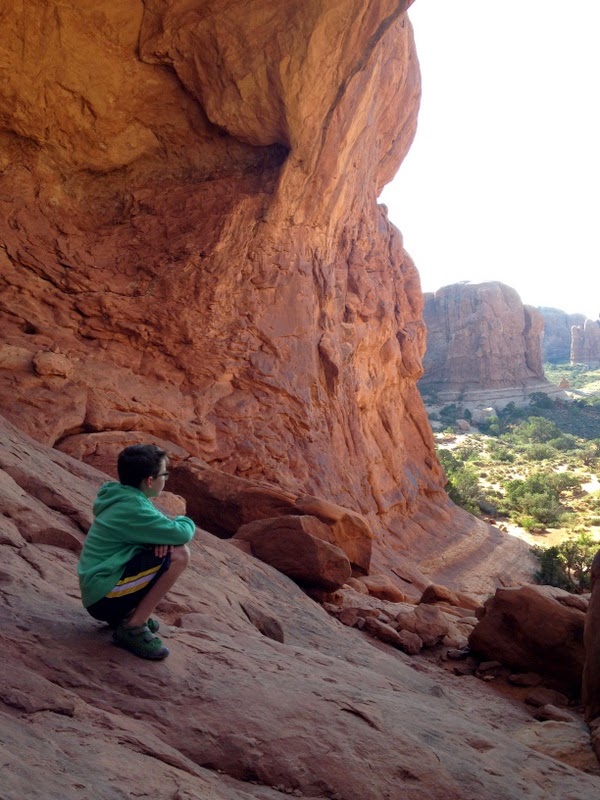 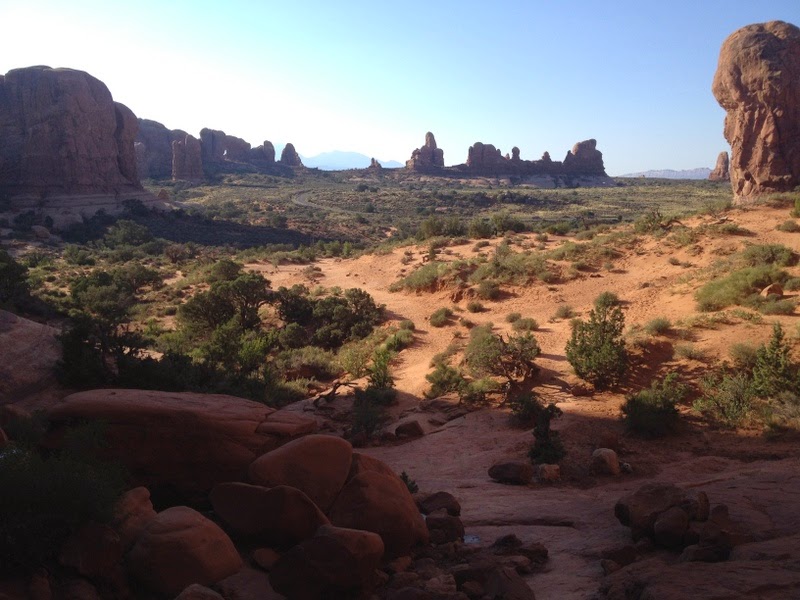 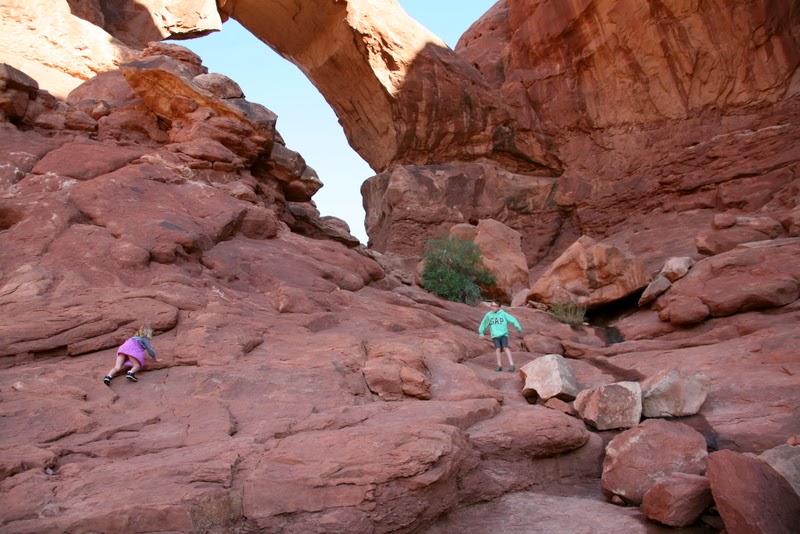 When the first giant tour bus pulled into the parking lot, we left.
We were no longer willing nor able to share the park with others.


After returning from our road trip, we immediately packed the car back up to go spend Labor Day weekend with our friends on one of the San Juan Islands. There were 16 of us scattered about in tents in the yard and the nooks and crannies inside our cottage rental. There was only one bathroom.  It's a damn good thing we're a very close-knit group. 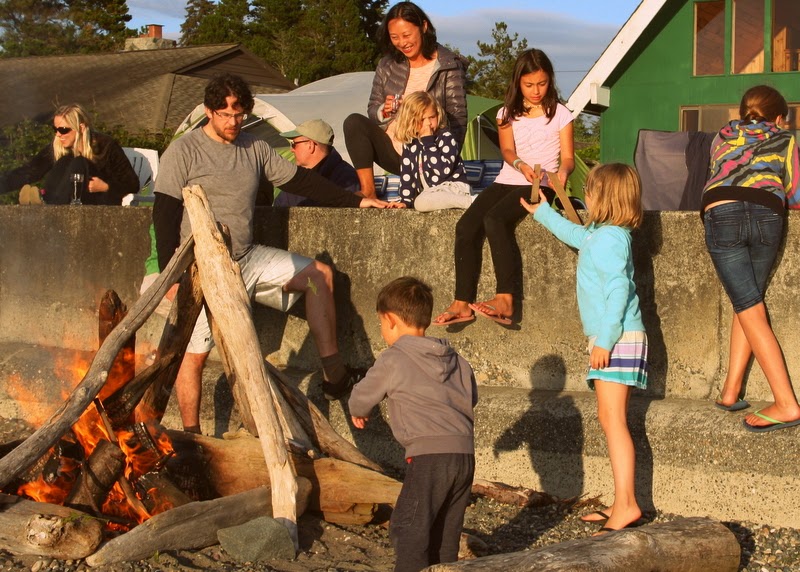 We stumbled across many sleeping men during our long weekend on the island.  We did what anyone would do in our situation -- we messed with 'em. 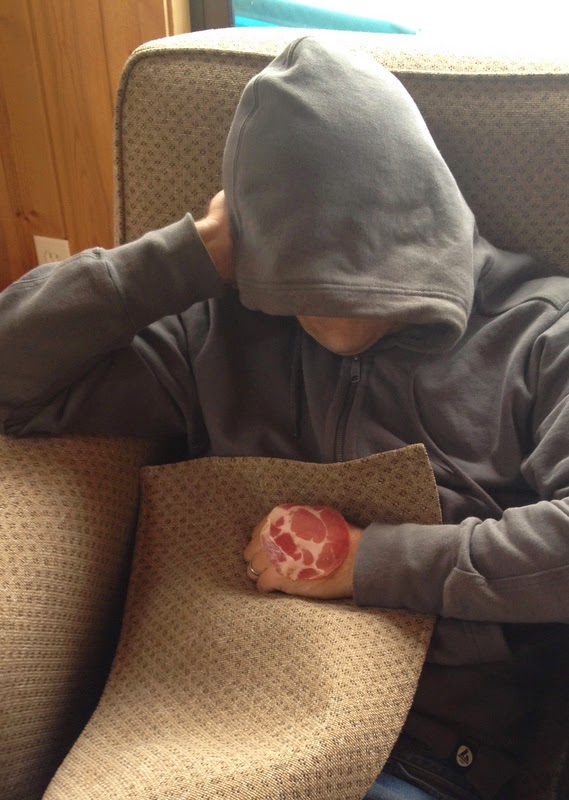 We decorated this one with meat. 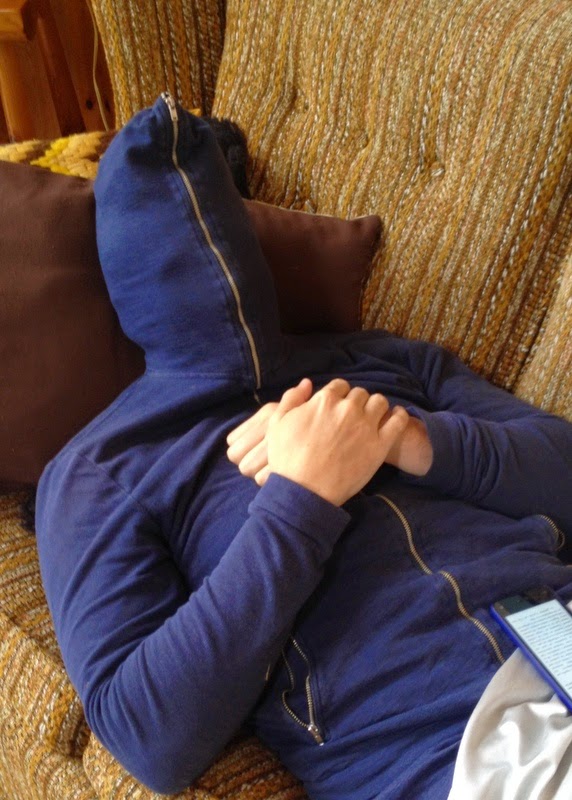 We zipped this one into his sweatshirt. 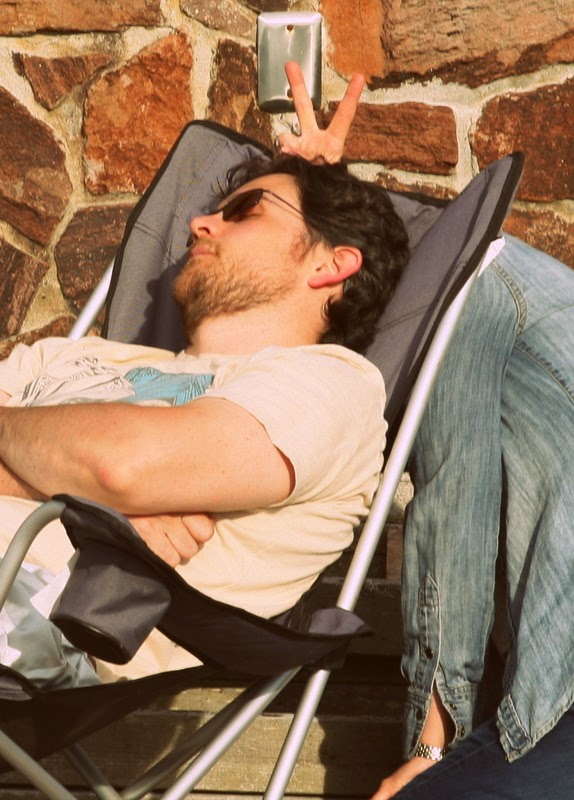 We made headlines during our island stay, at least the imaginary ones in our minds.  We went for a group hike one day and nearly lost all our kids when they followed each other Pied Piper style towards a cliff. After we'd screamed and gathered them back up again, we were able to laugh and picture the headline we would have generated: "Wow, stupid city folk lose ALL NINE of their children."

Seattle Dad gathered wood for the bonfire one night and returned with a beautiful thick cross section of a log.  We commended him for the great find.  The next morning we realized he had "gathered," and we had subsequently burned, the piece of wood the next door neighbors used as a step from their backyard down to the beach.  The absence of said log created quite a drop.  That incident spawned our next imaginary headline:  "Elderly woman faceplants attempting beach access when stupid city folk burn her stairs." 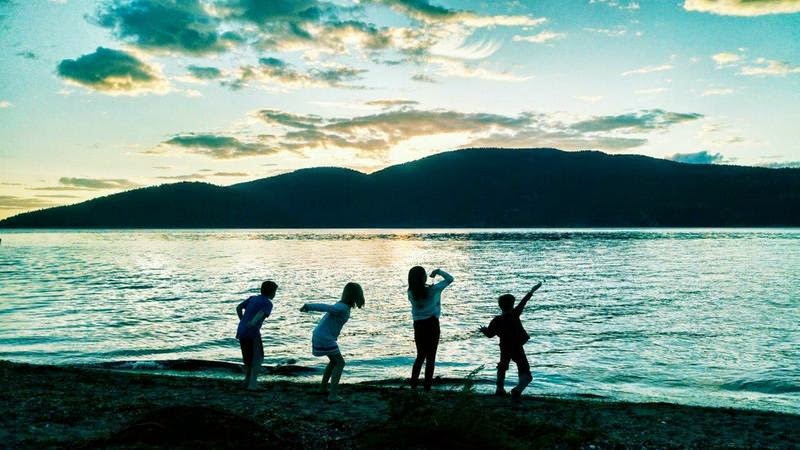 Now that I've more or less done a crappy job of wrapping up our summer, it's time to move on.  The first items to address are our wills, or lack thereof.  Alex and I have been without wills all this time and realize it's unacceptable with small children in the picture.

We met with a lawyer to right our wrong.  It's fun to sit in a room with a lawyer and envision how life will be when you die.  Bossy people must love making wills because they can be all, "I'm gonna tell you what to do even after I'm DEAD, HA!"

Al and I decided pretty quickly that Raba and Zee should take the kids if both of us croak before they're grown.  Then the lawyer asked, "What happens if both you and Alex are dead and Raba and Zee are dead?" and we exclaimed, "Dear God!  These are very unlucky children!"