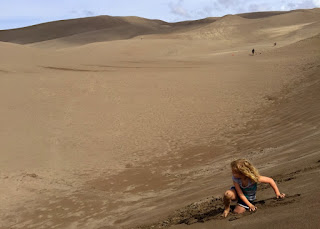 Life post-roadtrip is depressing.  Last week we were waking up to the stunning scenery of Monument Valley.  This week I'm waking up to the equally imposing yet not as inspiring monolith of laundry piled halfway up my closet wall.  That thing is insurmountable.  I'm considering leaving it there as a plaything for the kids, a soft yet slightly crunchy jungle gym emitting the faint aroma of sweat and desert and fun times past.

I am not spontaneous in my daily life.  On the contrary, since becoming adult-ish I like things planned, like to know what's coming around the corner.  I keep a Calendar That Must Be Obeyed and don't care for surprises. If you surprise me, my immediate impulse is to karate chop to the eye socket.

But I undergo a personality transformation on the road.  The planned itinerary says Canyonlands National Park but I'll wake up that morning and think, "not feeling that today, let's go to Monument Valley**."  It's a good feeling to wake up and know an infinite number of things are possible.  It's also good to know that spontaneous part of myself still exists, the part that can switch it up, listen to the inner stirrings that are telling her to f*ck that plan and bail.

**The Monument Valley-for-Canyonlands substitution really happened this time around and it was a fortuitous change of plans for a certain small dog.  More on her in a minute.

After our time in Denver, my parents joined us for a couple days at Great Sand Dunes National Park and Preserve. The Great Sand Dunes are nature at its most confused.  Nature went and built itself some giant sand dunes in between some mountains and some wetlands.  Nature, go home, you're drunk! 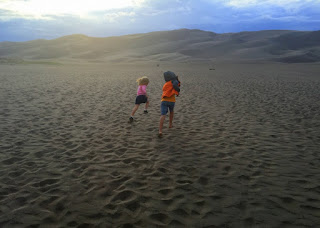 The plan was to sled the dunes but we soon discovered the snow sleds I'd hauled from Seattle were useless on soft sand.  You could make it to the bottom but it was at a pace slower than Lucien on an alpine slide.  And that is pretty damn slow. 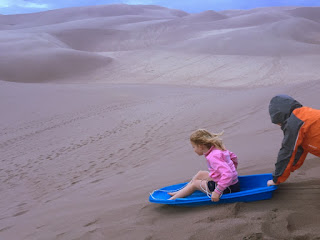 It looks thrilling.  It wasn't. 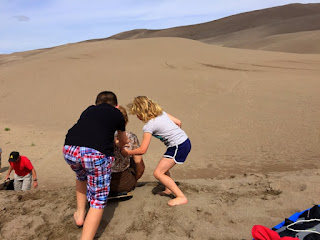 Giving Grandma a shove on a heavily waxed sand sled.
Grandma flew then wiped out.  It was glorious.

The fun began, that is, until the fun ended, which is about the time Coco got sand in her eye.  The wind kicked up and began blowing sand around our legs, which felt to Coco like little sand knives stabbing her skin and rendering her life impossible to bear.  There was some crying, some blubbering, some sitting on the sand refusing to move.

We now say about the sand dunes, "they were really really fun until they weren't fun at all." 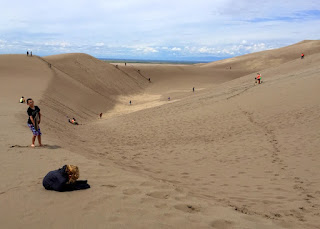 That's Coco, the little windbreaker-covered ball, refusing to live any longer until we made the wind stop.


We said goodbye to my sand-covered parents and drove onward to Santa Fe, New Mexico.  Santa Fe is a special place, a favorite of my family for decades. It's full of art galleries, old adobe buildings and quirky characters -- like the guy who stood in front of the automatic doors of the grocery store and said, "OPEN SESAME" in a booming baritone whenever someone exited.  We also encountered a woman playing guitar and singing in the park.  She followed people as they walked past and sang more loudly if they didn't acknowledge her. Some tried to run but she ran after them with her guitar and sang even more loudly. She was very aggressive with her songs. 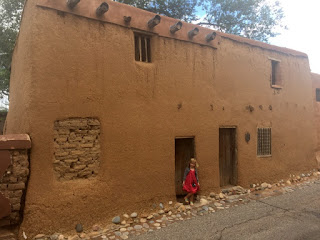 One thing I've never understood about Santa Fe is how a city centered around art and artists can be so expensive to live in.  Artists are not known for having millions of dollars on hand to buy a small adobe casita.  Are the rich people housing the artists in their garages?  Are artists living in caves just outside the city limits?  I hope the artists are getting enough to eat living on the fringes of the vibrant community they helped create. 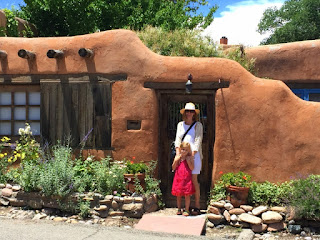 
I spent a significant amount of time browsing the galleries of Santa Fe.  I was pegged as a serious buyer in every gallery I entered and schmoozed mercilessly, a rare occurrence.  I think it was because I was wearing a hat.

I love browsing art galleries but I hate talking to gallery employees about the art therein. When you're a serious hat-wearing art buyer, however, they want to talk to you a lot.  I rarely have the "right" words to discuss the art.  I often sound like an idiot.

If a gallery worker asks my opinion of a piece of art I'll usually conjure some gem like, "It's so blue and gloppy."  Or I'll say, "It looks like bubbles, so very whimsical" and the gallery person will respond, "He was actually commenting on the physical pain he feels taking his first breath each morning in a world full of bombs and starvation." and then I'm like, "Well, shit."

I would like to browse art galleries without being approached by people.  I only disappoint them.  Next time, I will not wear a hat.  I will wear denim overalls and Crocs.  That should buy me some gallery alone time for sure. 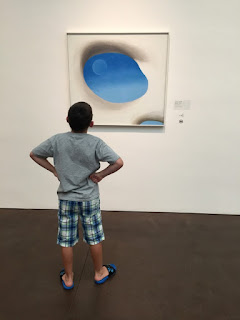 This is not a gallery.
It's Lucien at the Georgia O'Keefe museum in Santa Fe.
Which I also love very much but don't wish to discuss.


Alex met us in Santa Fe for the week.  We drove to the airport to pick him up in the middle of a hailstorm definitely sent from God to punish me for my earthly sins.  I stayed outwardly calm for the benefit of the kids but I was freaking out.  It sounded like an angry mob attacking with baseball bats.  The road was obscured by the mess of rain and hail pelting our car (which still bears hundreds of dents as a souvenir).  I was sure the windshield was about to shatter, causing me to drive off the road. We'd end up in a ditch with a bunch of artists who live there because they can't afford to live in Santa Fe.

We made it to the airport but not without getting reacquainted with God a few times.

After Alex arrived we did an overnight trip to Taos, New Mexico. I visited the Taos Pueblo 24 years ago on a family vacation.  It was one of the most formative experiences of my young life and led me to care deeply about the issues affecting today's Native Americans.  This early interest in social justice led me to Seattle after college to care for adults with developmental disabilities. 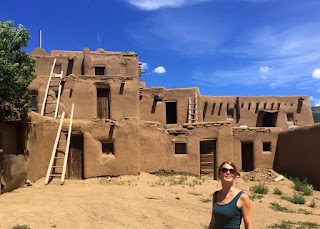 It's therefore not too far-fetched to say my visit to the Taos Pueblo at age 16 led me to this very day, this life, this exact chair I'm sitting in now while stuffing my face with yogurt covered raisins.  If I hadn't visited the pueblo back when I was young, I'd probably be stuffing my face with yogurt-covered people right now because I wouldn't care as much about them.

My kids were not as profoundly moved by the pueblo as I was but I'm going to fault their age and not their characters for that.  I will make them return year after year until they understand just how badly the Native Americans got screwed. 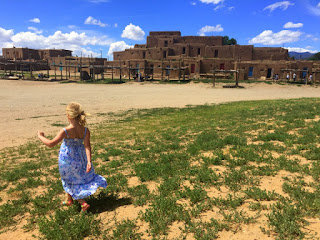 Coco, get back here and care

I have more to say about Taos.  I also said I would talk about the dog in Monument Valley but this post is getting long.  A three week road trip does not boil down nicely into one blog post.  Or, apparently, two.  It probably won't even work in three.  Regardless,  I'll return to finish the road tale soon.

In the meantime, I will return to a boring life full of drudgery. 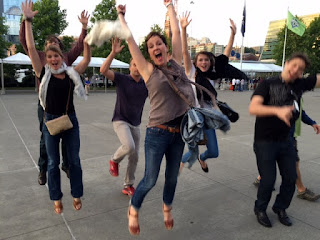 False.  These people would never let that happen.


This is us attending a Macklemore concert a few nights ago.  That's me on the left.  We got yelled at by stadium staff for standing in the aisle up next to the stage.  So we left that aisle and stood in a different aisle.  They found us there and yelled again but there were lots of aisles and we stood in them ALL.

Being aisle outlaws was, frankly, more entertaining than watching the show.  Macklemore, you lost us when you donned a David Bowie wig and sequined cape.  What the hell were you thinking.