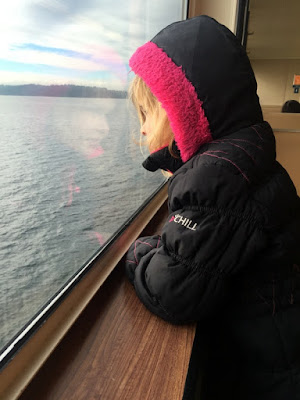 My mom, dad and brother recently visited from Colorado. They couldn't come for real Christmas so instead came in January for fake Christmas. This meant our Christmas season lasted forever and by the time they arrived we were all quite sick of it.

Our Christmas tree was the most pathetic, dried up, shriveled thing you've ever seen by the time they walked in the door. It didn't even look good in the first place so you can imagine the state of it five weeks later.

My dad, a retired lawyer, has been having an ongoing dream for months about a product liability trial.  His dream is impressive in terms of detail and how it picks up where it left off from night to night. In the mornings we greet him with, "Morning, Dad, how's the trial going?"

Aside from Dad's impressive dream skills, the high point of my family's visit was a ride to the gas station in the Winnebago.  I may not be the most entertaining hostess but in my defense, they've been visiting Seattle for 18 years and have seen everything there is to see more than once.  But they've never seen a gas station from a Winnebago.

At the end of that day, Dad said, "Well... today we went to the gas station. That was a pretty exciting day, daughter."  It's likely that was sarcasm but I'll hold out hope I truly opened his world in magical new ways.

That night for dinner I attempted to make a pot roast.  Since we were busy all day (at the gas station), I decided to make it in the slow cooker.  I'd never done a pot roast in a slow cooker before but it seemed straightforward enough.  The only problem was instead of taking six hours as planned, the roast took 10-and-a-half hours to cook.  My pot roast was ready to eat at about 10:30 that night but we'd already eaten the salad and mashed potatoes for dinner, done the dishes, and my parents had gone to bed.

The next day I made them watch Natani at her doggy daycare via the daycare's webcam for a very long time. It is surprisingly riveting television to watch the social dynamics of a pack of dogs. Natani is apparently the town bicycle; she was repeatedly humped by many dogs, most notably a randy Irish Setter and most embarrassingly a tiny Jack Russell Terrier.  Those dogs would not leave her alone.  Mom said it's because Natani is young, cute and blonde.

I considered calling the manager of the doggy daycare to ask him to give Natani a break from the Humpy McHumpies but Mom said that would tell him too much about me -- namely I have no life and watch my dog on webcam all day.

My sister, Raba, and her wife, Zee, have moved out of Seattle proper and have bought 12 acres on a nearby island complete with a red barn they intend to one day fill with horses. 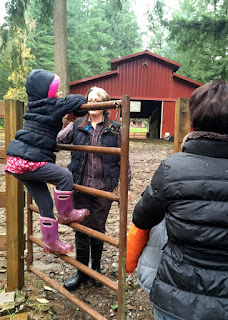 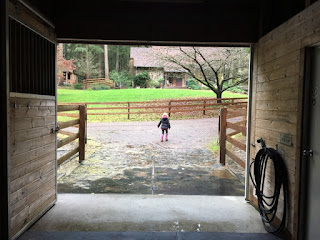 
Raba and Zee are now living some sort of idyllic "nobody messes with us" kind of existence.  I don't understand.  You mean nobody rifles through their recycling bins at 1:00 a.m. looking for aluminum cans or steals their garden tools from the front porch when they're left unattended for five minutes?  That kind of life is foreign to the downtown-centric people we are in Banister Abbey.

Speaking of our neighborhood, the Central District currently has a serial bread dumper on the loose. The bread dumper is a 50-ish-year-old male who dumps large amounts of bread daily in a nearby empty lot.  This is upsetting to neighbors because it's attracting racoons and rats.  When approached and asked to stop, the man apparently yells, "FUCK YOU" before running away.  Bread dumping -- must admit that's a new one, even for the C.D.

I digress.  Back to the island my sister now inhabits.  Mom said the island reminded her of the Hoh Rainforest on the Olympic Peninsula because of the fuzzy trees but instead of saying "all the Spanish moss on the trees" Mom said, "all the Spanish rice on the trees."  The hysterics were unbearable as I pictured Spanish rice dripping off trees and plopping onto heads of visitors below.  For those in need of lunch, they could merely tilt their heads back and open their mouths, which would be quite handy.

Mom laughed along too but then looked at me with a frown and said, "you're going to put that in your blog, aren't you." and I said, "YES."  My family knows me better than anybody.

We posed for many photos on the island that, as of this time, has no chronic bread dumping issue -- 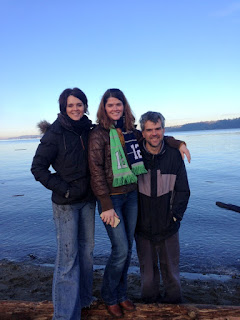 This is Lucien staring down a cargo ship -- 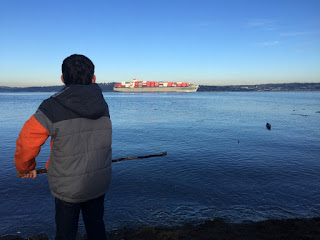 This is Coco throwing something into Puget Sound with impressive force -- 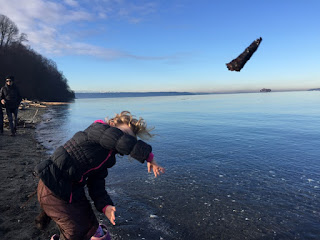 This one looks like the band got back together -- 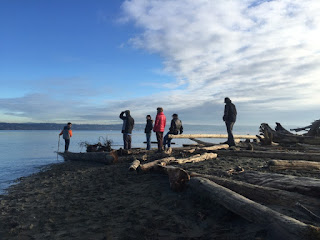 Soon after it was taken, Lucien fell off the log into the water.


When my family gets together, we laugh a lot.  One of our favorite things to do is reminisce about the fun we've had over the years, especially on our family vacations.  This time we revisited our summer vacation on Lake Powell, Arizona in the early 90s. We rented a boat on Lake Powell but none of us had driven a boat before and it turns out boats don't always stop when you want them to stop.

We came in too hot on one landing and took off a chunk of the end of the dock.  Later, when it came time to gas up at the boat gas station, we all bailed on my dad.  We jumped out of the boat to avoid the embarrassment we knew was coming.  The attendant called to my Dad, "Stop at pump three, sir" but when Dad couldn't make that happen, the guy yelled, "Stop at Pump Four!" and then "OK, stop at Pump Five!" But Dad just kept going.

If you want to know why I am the way I am, there's no need to look further than these people. They are both the wind beneath my wings and the birthplace of my neuroses.  In other words, they are family just like anyone else's family.  And I am so lucky to have been born into their midst.

You know who doesn't feel lucky to be in this family right now?  Oscar.  Now that he's almost 15 years old and crabby, old man schnauzer hates being groomed so I put it off and put it off until his coat is so matted the groomer has no choice but to shave it all off.  Now he's so cold and has to wear a thick fleece sweater all day long with his diaper.

Since his haircut, he's been following me around sighing deeply.  He really wants me to know he isn't happy about recent events. 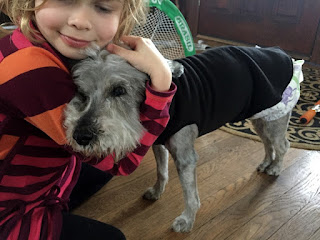 I'm happy to report,
Dad finally got the hang of that boat.
MJ
Posted by MJ at 5:45 PM