I had a question about Sarah Palin recently so went to Google to get it answered.  I soon forgot my question because I got distracted by somebody else's -- 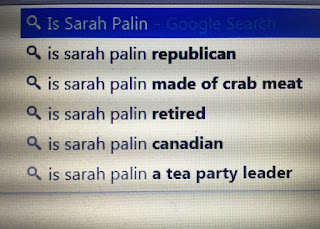 Is she made of crab meat?
And if she is, would that explain things
or provoke further questions?

I've got skiing on the brain thanks to a healthy snowfall up in the mountains. In my family, skiing was one of those things you couldn't avoid, much like mowing the lawn or picking up all the Legos stuck in the shag carpet.  It didn't matter if you wanted to do these things or not; it was something you did for the benefit of the family.

I grew up in Ohio, which is not a state known for mountainous terrain.  The best we could do in such a place was head to upstate Michigan where the hills afforded us a bit of height and a bit of pitch. As  I mentioned in this previous post, my first year on skis, at the age of 6, I hit a tree and broke my leg.  It was not a glorious beginning but Mom and Dad made me get back out there the following season anyway.

Once a year we went to Colorado for a bigger ski trip, almost always with family friends with whom we rented a slopeside condo.  Those are good memories, particularly the time our fireplace chimney clogged at Snowmass so the condo began filling with thick black smoke.  My dad's law partner, Mort, grabbed the burning logs with tongs and ran to the balcony where he threw them overboard into deep snowdrifts down below.  We always wondered what the downstairs neighbors thought as burning logs fell from the sky.

That was the same condo that had a line drawing of a butt hanging on the wall.  I thought it was the funniest thing I'd ever seen because I was about 10 years old and, much like Lucien today, thought butts were hilarious.  I studied that drawing and practiced replicating it during our vacation.  By the time I returned to school, I was a butt drawing expert, which impressed my fellow fourth graders.

I didn't always enjoy those family ski vacations, in fact often found them unbearable as freezing rain pelted my face or subfreezing temperatures made my fingers and toes go numb.  I remember on more than one occasion begging my parents to stop so we could go inside as unhappy tears froze on my face.

Yet here I am, all grown up and inflicting the same cold torture upon my children that my parents inflicted upon me.  Tradition!

Our most recent ski outing began in an exciting way when our neighbor/dogsitter for the day texted to say, "Oh my god, there's stuff thrown all over your house, we think somebody broke in." My heart raced for a minute until I remembered the state in which we'd left earlier that morning.

I responded, "When we left, there were outgrown ski clothes tossed frantically all over the dining room, Coco has taken up three rooms with an art supply explosion because she apparently needs that much space for her most recent elaborate masterpiece which involves many wads of crumpled paper and Natani has shredded four of her toys in the past 24 hours so there is stuffing and ripped pieces of fabric littered throughout the kitchen and dining room and on up the stairs."

A few minutes later came a sheepish reply, "OH. I'm so sorry, never mind, it's just as you said." Well that was embarrassing.  Onward! 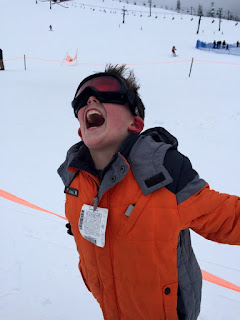 that's him being him

Alex and I were in the middle of a contentious argument that ski day about an important matter.  We decided that, in order to preserve the enjoyment we feel when skiing, we were only going to discuss said contentious matter if we were alone on a chairlift.  At all other times, we were going to have FUN.

The plan worked well.  Tense discussion ended when skis hit snow at the top of the lift.  We each enjoyed our runs, sometimes stopping to soak up the view and offer pointers on each others form as usual (Alex says I don't bend my knees enough and turn with my shoulders I KNOW I KNOW) After a particularly enjoyable run, there would be high fives at the bottom and enthusiastic, "Wow, that was amazing!"  Then as soon as skis lifted off the snow on our next ride up, we would turn towards each other and begin again with something like,  "I can't believe you said that, jerk!"

It helped diffuse the tension and made the fight manageable.  We worked it out better than we would have at home because it wasn't able to boil over thanks to the built-in fun breaks.  Next time a fight is brewing, we're headed for the slopes.  We'll just suddenly take off in the car, leaving the kids blinking and looking at each other in confusion in the kitchen. 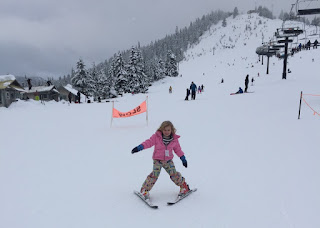 
We stopped at IHOP on our way home for a dinner of pancakes.  Our server was an odd bird.  We alerted her on her way through the aisle that she was pouring tea continuously from a kettle she was holding at a precarious angle.  She shrugged and said, "Well I'm always spilling something, aren't I," and just kept walking, a steaming tea trail following her all the way back to the kitchen.

This wasn't a great post about skiing.  I wrote a better one here.

Best I can do today!
MJ