The Parks have Personalities -- Part Three

Do yourself a favor and don't start looking through boxes of old photos today.  It's a rabbit hole, one you'll be sucked into for hours and will emerge from clutching fistfuls of old Polaroids and feeling slightly unhinged. That old saying about the passage of time will never be more profound -- "nothing's changed but everything's different."

Our lives look nothing like they did back when we were first married but the changes happened so slowly, or at least so logically, that over time I didn't realize the seismic shifts taking place. How did those people, those friends we adored so much, fall out of our lives over the years?  When was Oscar ever that young and vital looking?  Why didn't anyone ever tell me my haircut was not flattering my face at all, in fact appeared to be openly mocking it?

Along those lines, it did cheer me to realize Alex and I look better today than we did fifteen years ago.  It's taken us this long to figure out our bodies and to develop personal styles that flatter instead of confuse.  Alex used to wear a lot of sweat pants back in the day, while I pieced together cringeworthy ensembles like turtlenecks with dowdy length skirts (dog print of course) and clogs.

Our faces look better now, too -- a few more lines and wrinkles, sure, but a lot more personality and wisdom than back when we looked unseasoned with vaguely vacant eyes and goofy grins.

Anyway, there's a point to all that rambling up there but I'm feeling stressed about finishing the Road Trip posts. Thankfully I wrote everything below before I went down the rabbit hole, a.k.a the boxes of pictures in my closet.  If I tried to write the post now it would sound more like, "I must cling to these memories of the Rocky Mountains with cramping fingers because very soon everything will be different and I'm going to miss these times with a desperate ache and a mournful longing."

But instead I'll continue with my parks-as-people metaphor, which, while certainly more cheerful, may also be ten times more annoying. 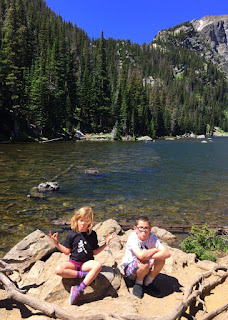 Rocky Mountain National Park in Colorado is mature and dignified.  It's stoic in its rockiness and wise in its cragginess.  It doesn't pay much attention to the riffraff, can be aloof, is a bit of a loner. Rocky Mountain National Park is like your favorite college professor.  He's super smart, respected by his peers and revered by his students.  He doesn't speak much outside of lectures, has salt and pepper hair and is known for always wearing cowboy boots to class.

We had a "first" on our drive to Rocky Mountain National Park.  For the very first time, the gas pump did not stop pumping once our tank was full, resulting in a gas waterfall (gasfall?) down the side of the Winnie B that ended in a shimmery gas lake underneath her body.  It was also a "first" in that Alex has never wandered away from the pump to go buy a coffee before.  That one will also be a "last."

The gas station attendant took a look under the RV and said, "ohhhhh, man, that's a really big one" which sounded pretty bad so I was confused when he next said,"OK, you guys can start the engine and drive away no problem." I was not excited about a teenager advising me on important explosion-related matters so I balked, I hesitated, I hemmed and hawwed and asked things like, "Are you super duper sure, young man?"

He said the gas was not pooling under the engine so there was no risk   He seemed confident but those were still some heart palpitating moments as I started the engine and rolled the Winnie B over the giant gas lake.

Estes Park, a cute little touristy town, is the entryway to Rocky Mountain National Park.  We were headed there because my extended family was gathering in Estes Park for our first family reunion in over 15 years. My family is a bunch of jokesters and card players.  They're good conversationalists if you like sarcasm and puns.

Our first evening all together again, we sat outside on the resort lawn having a good catch-up chat when suddenly the sprinklers turned on.  We all ran in different directions yelling. My uncle stood on the front porch of his cabin and pointed and laughed at us with a beer in his hand. That sums up our get togethers pretty well.

Rocky Mountain National Park is crowded.  If the park is indeed a smart salt-n-pepper haired semi-cowboy professor, his class always has a waitlist and a bunch of coeds are hoping to seduce him during office hours. The way this popularity manifests in the park is all the parking lots are full so you have to park your car far away and ride a shuttle bus to the trailheads. 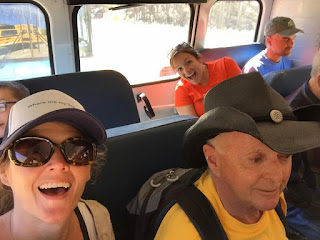 that's my cuz and I
feeling excited on a shuttle bus 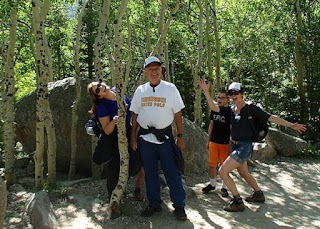 We did a few family hikes and they were everything you'd expect from the Rockies -- craggy peaks,  jaw-dropping vistas, mountain lakes, lots of marmots. We got to know one marmot pretty well when he tried to steal parts of our lunches.  He was a very bold little marmot.  We named him Sausage. 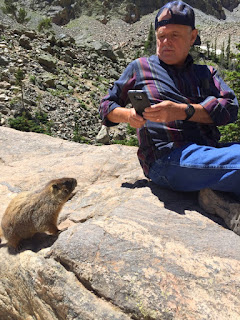 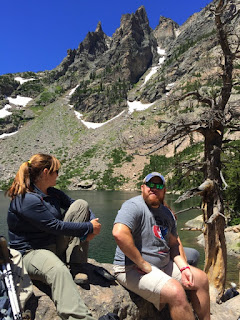 My uncle took to calling Coco "Li'l Goat" for the way she climbed and scrambled over rocks. She's a good climber and she apparently loves it which begs the question, "Why, L'il Goat, do you lie on the ground and whine about being bored whenever I take you to our nearby climbing wall in Seattle?" 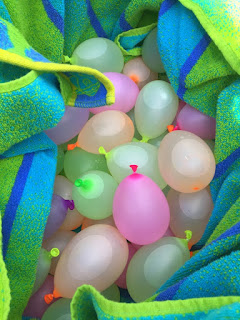 One of our family's age old traditions is ye olde water balloon toss.  You pair up, stand face-to-face, and toss that balloon to your partner.  If you make the catch, you each take a big step backwards.  And so on and so forth until there is one team left standing without soaking wet shirts.

Alex and I won the first round but then, just to show off, we kept throwing and taking steps backwards long after all other teams were eliminated.  We did this until I nearly stepped backwards into the creek; we launched our balloon straight up into the sky and it always made its way down with a light plop, unbroken, in our partner's hands.  We were unstoppable. I was also, for the record, wearing tall wedge heels. I'm definitely just bragging now but it may be my most impressive life accomplishment thus far so please, indulge me. 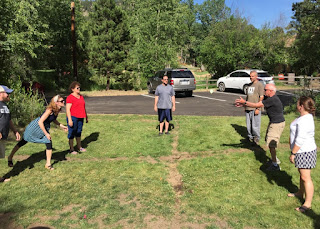 This is me chucking a neon green water balloon to my dad.
I'm sorry, but my tossing form is dynamite. 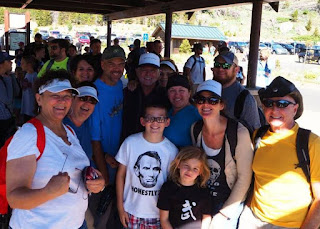 As the extended family disbanded, the four of us, very weary now from all the travel and hiking and water balloon fighting, drove to Devils Tower National Monument in Wyoming. 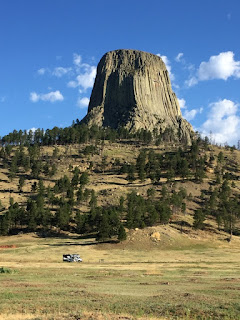 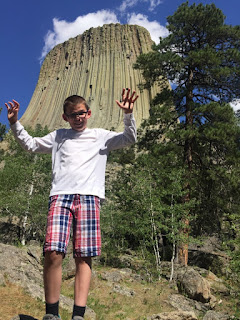 It's possible that by this time in the road trip, we were quite tired and no longer thinking clearly, kind of how I'm currently feeling about writing this post.

Our final stop was ambitious, especially given our rapidly deteriorating mental states.  As we drove the many many hours towards Glacier National Park in Montana, I could feel Alex glaring at me with his little eyeballs.  It may have been too much, tacking one more park onto the end of the trip, especially one as remote as Glacier.  I cheerfully chatted away, mostly to myself, hoping to distract Alex from how long the drive was taking and how much he hated me in that moment. 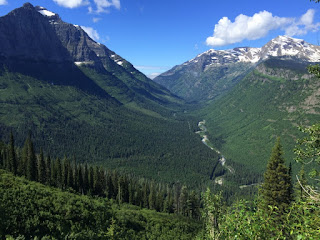 Sucked to get there but Glacier was worth it.  Glacier is wild and a little weird, like a beautiful feral child who was raised by wolves but is learning to reintegrate into society.  It's like a Sigur Ros song: foreign and eerie and Icelandic. 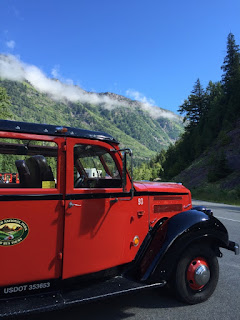 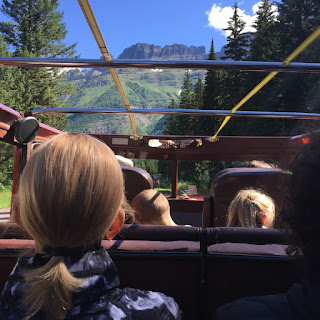 Riding in the Jammer was much more enjoyable than driving the Winnie B because 1) we made it up and back alive and 2) we got a history lesson and 3) the being alive part again. 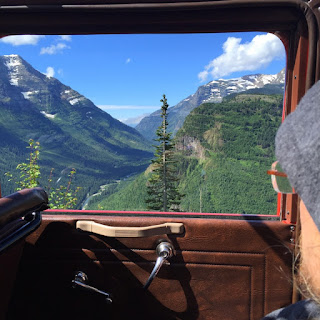 
It got a little odd, maybe, but I do believe we've made it through yet another road trip multi-post series.

And just in time...
because those pictures in those boxes aren't going to cry over themselves,
MJ
Posted by MJ at 5:57 PM