The guy on the other side of the door


So that really happened.  Hillary was defeated by a bigoted, rapey can of Fanta.

We watched the election results with a big group of friends.  It began as a supremely festive evening. There were hugs, high fives, some shadow boxing in corners as we got pumped to watch history happen, and to show our children that love wins and civil rights, inclusion, and being qualified for a job matter. 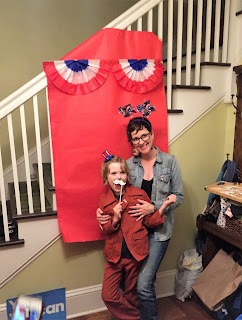 There was a photo booth area
with goofy USA props.
Look at my friend's daughter in her pantsuit.
We were so excited. 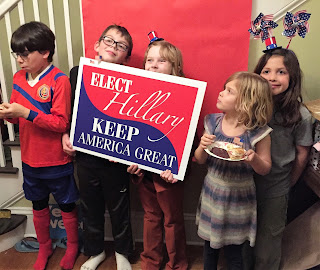 My dad designed and made this sign.
My family is awesome.

Blame it on our Seattle liberal bubble but wow, did we ever believe the wrong thing about our country.  We believed people had seen through him by then, seen him as a con man with an obvious personality disorder, as a shitty businessman who didn't pay his bills and somehow managed to bankrupt casinos. Casinos! Now there's something that's truly rigged, and in favor of the owners.  How do you even screw that up.

We believed people had seen him as a thin-skinned explosive poorly tempered man prone to Twitter fights at 2 a.m. when someone dared criticize him, as someone who openly disparaged women, multiple minority groups, people with disabilities, the families of fallen hero soldiers.... I could go on and on and on, that's the worst part, and so depressing.

We would never elect such an obviously selfish, hateful person with zero knowledge of government to the highest office in the land.  Right?

As results started coming in, it appeared we had done exactly that.  The enthusiasm drained out of the room and a stunned silence settled.  There were several laptops busted out at the dining room table as we tried to find additional information and make sense of what was happening. Every once in awhile, someone who'd done the math piped up to announce which states Hillary still needed to win. The numbers weren't promising.

Then there were heads in hands, a lot of tears, some toasts made to uncertain futures, and heavy heavy drinking.

As we packed up to head home in a state of numb denial and despair, I went to our friends' fridge, scooped a bunch of their beers into my purse and muttered to no one in particular, "I'm gonna need these later."  My friend walked into his kitchen and asked flatly, "MJ, why are you stealing all our beer" to which I replied, "It's a Trump America now, I do what I want, b*tch."  Polite society had devolved just that quickly.  Scary stuff.

Reading the news these days raises my blood pressure to dangerous new highs. To deal with this, I've decided we're in pressing need of a new area rug for our dining room. Instead of constantly refreshing news websites every thirty seconds and trying hard not to hit things, I'm spending those hours perusing area rugs online. We don't really need a new area rug but please, don't tell myself that, I need a break from the rage and the fear. 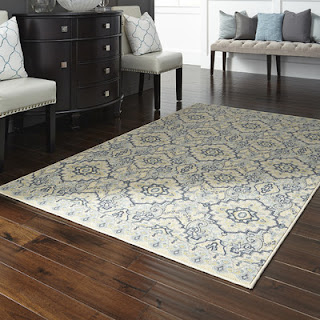 Ooh, that's a pretty one

Last night I was awakened at 3:30 a.m. by Natani barking downstairs.  Lucien soon appeared in my doorway to tell me he heard the recycling bins being moved outside.  This has happened several times before; it's always a posse of raccoons raiding our garbage and compost cans and being general nuisances.

Natani continued to bark downstairs. I sighed and threw back the covers, told Lucien to go back to bed. I had to get downstairs and quiet Natani before she woke Alex and Coco, too.

As I entered the kitchen, I noticed Natani had added a new sound -- an angry, seething, guttural growl in between her barks.  Something was really, really, really pissing her off.  I gave her a soothing pat, told her to calm down, and pulled aside the curtains that cover the back patio doors to see what had worked her into such a lather.

My heart stopped as I stood face to face with a man on the other side of the glass who was pushing on the door as hard as he could.  He stopped for a second, looked at me, then continued to push on the door.

Adrenaline is an incredible thing.  My fight-or-flight activated and my body said, "fight right now, RIGHT NOW." I lunged towards him, began punching the door frame as hard as I could (fascinating choice, body) and screaming at him to stop, to go away, that there was no way I was letting him break into my house.

As I punched the door, I assumed he would turn and flee but he didn't move.  He stood there, stared at me, then said sadly in a slurred voice from the other side of the door, "Calm down. Why are you so mad at me?" He then resumed pushing on the door, only this time I noticed he was having a hard time keeping his footing.

I calmed down a little, stopped punching the door and realized with some relief he was really not an imminent threat. This was not an armed robber nor serial killer.  This was an eff'd up guy with bleary sad unfocused eyes, obviously under the influence of something powerful and confused as hell as to where he was.

It was about that time I heard a crashing sound come from the staircase.  Alex had taken a sleeping pill much earlier that evening because he had to wake up at 4:30 a.m. to catch a flight.  He had slept deeply through Natani barking and Lucien and I conversing in our room but had been awakened by me screaming at someone to go away downstairs.

He ran from the bedroom in a groggy Ambien daze and soon crashed down the stairs, losing his footing entirely the last several few.  Poor Al was also under the influence of something powerful, and also quite confused, but he tried hard to be of assistance in my time of need.

I ran back upstairs to grab my phone as Alex tried to reason with the guy, who was refusing to leave our back porch, through the door. I called 911 and two officers arrived within minutes. They were gentle with the man, led him off our porch then sat with him on the front curb for almost two hours as he sobered up.  They gave him water and covered him with a jacket when it began to rain. Then, after making many phone calls and giving him a few sobriety tests, they put him in a taxi bound for, we hope, better things for him.

Alex left to catch his Uber to the airport while the man and police were still sitting out front. He walked up to the man and said, "You really scared us. That was not OK," and the man covered his face and said, "I'm so so sorry."

My hand is pretty screwed up from punching that door but at least it's not broken. With my swollen hand and bruised and abraded knuckles, it looks like I recently started a street fight or, more likely for me, a bar brawl.  I'm gonna wear my purple hand like a badge of badassery for a few days and see if anybody gives me a wider berth.  Nobody needs to know my fight was with a door.

I hope Donald Trump is like that guy on the other side of the door.  At first scary, unpredictable, worst case scenarios swarming your brain in a sweaty hysterical fit of terror, but once you realize what he's truly got going on, which turns out ain't a whole lot, he turns into something manageable.

I hope, anyway.  I've got to keep some sort of optimism going through these next handful of years. That and a steady supply of alcohol.  And an area rug.  The area rug is probably the most important thing.

I read recently that Donald Trump's presidency is likely to be a golden age of activism in America. From what I've witnessed in Seattle so far, that could be true.  People are organizing, talking to neighbors, forming groups. The previously apathetic have turned mobile and active, at least so far. Here's hoping we can keep it up for the long run, not settle back into complacency and a feeling of powerlessness, and can effectively hold off the guy on the other side of the door.