count on me to bring the awkward 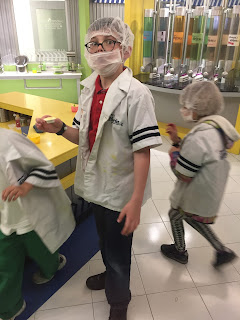 The photo to the left is Lucien making butter. It's a long story and I'm trying to avoid long stories today because they are making my blog posts go on and on for days. I'll discuss the butter when I learn how to truncate.

There were lessons learned this week in Mexico. One lesson I've learned is you're supposed to tip the people who bag your groceries. My grocery load is always sizable so the baggers, who are generally elderly and adorable, probably aren't too happy when I walk away with a single "gracias" and a smile. Smiles don't pay the bills, gringa.

I noticed the guy behind me tipping the bagger (as in giving him money, not pushing him over) on my last shopping trip even though he was only buying a couple bottles of water. If that guy tipped for only two things, I should probably tip for my lots of things. I froze and observed those around me, which is always good operating procedure for an ex-pat. True enough, everyone was handing the baggers money on their way out the door. I nearly dumped my entire purse out in my haste to find pesos.

I won't make that mistake again. Look at all this learning I'm doing.

I embarrassed myself pretty thoroughly this week. Julio, my friend Seattle Mom's driver, whom we met last time we were in Mexico City, came to our building to pick up something for Seattle Mom. I met him down in the lobby of our building.

It's like I knew before it happened our interaction was going to be awkward because I went into it a little sweaty-palmed and bumbling. I could see he was coming in for a handshake as he approached me but I, for reasons I don't know, instead dove in for a cheek kiss.

I'm not sure who kisses who and who shakes whose hands around here. What's the social protocol on that? Whatever the rules are, I'm pretty sure I broke them with Julio because he was not expecting the cheek kiss and it threw him way off. I could sense that, could sense his confusion and tension, but I still kept right on leaning in because you can count on me to bring the awkward.

I couldn't stop myself even though I knew I was doing the wrong thing -- and worse, I was doing it in front of witnesses, since Senor Scowly and his friend were standing a handful of feet away. Instead of backing off, I doubled down. I decided to show them all I stood firmly behind my decision to kiss Julio with conviction. So as I landed on Julio's face, and as Julio still desperately tried to shake my hand, I did a very loud "Mwah! kiss sound. Twice. The sound echoed in our modern sleek building entry. Such a weird f*cking thing to do.

Did you know it is possible to cringe so hard that you can actually crumple and fold into yourself at the middle? It's like human origami. I hobbled back to the elevator after Julio escaped (that guy moves fast when he wants to) contorted with embarrassment. My old popular refrain from Paris days returned in that moment: "I am SUCH an ASSHOLE." Nice to have the ole mantra back again.

This week has been pretty awful because Lucien is sick and home from school for the third day in a row. Last night, Lucien was so sick I texted Seattle Mom, my soul sister friend back home, for advice. She's a nurse and is always a voice of calm and reason. I was having a stressful night; Lucien's fever was so high, and I didn't know how to call for medical help in Mexico if we needed it, and Alex is in Seattle for work this week. Seattle Mom said to push those fluids and take comfort he's lucid and talking to me normally.

At that very moment, Lucien chose to sit straight up in his bed and start speaking absolute nonsense. The first thing he said, eyes staring at me in a creepy unfocused way, was "we have to get out of here now." GAH!

The non-comforting, non-lucid thoughts continued with things like, "you expect me to have two elements" and "I think wrong about this color." I snapped my fingers in front of his face, clapped my hands, tried to get him to snap out of it. The look on his face and the bizarre words coming out of his mouth did not stop. I told him to get up, I'd walk him to the bathroom. He said, "OK, good plan for sliding rats."

He got up from his bed, pulled his pants down to his ankles, and hopped down the hall to the bathroom while saying something about people not being able to trick him for water. What the hell kind of eff'd up Mexican flu is this??

He doesn't remember any of that this morning and he's on the mend now. Hopefully he'll be back in school tomorrow and I can leave the apartment again.

Paulina babysat last Friday night so Alex and I could go out to dinner with two other ex-pat couples, both from Seattle. The company was hilarious good. Our dinner was delicious. Most noteworthy is Alex and I tried chapulines, which are fried grasshoppers. Eating grasshoppers is an ex-pat initiation rite in Mexico City so now we're in for real. 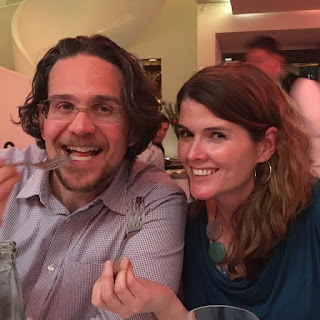 
I asked Lucien how Paulina got them to bed that night given the language barrier and he said, "She just kind of kept poking us until we moved in the right direction." I'm going to try that, I like its simplicity.

I've learned many things this week and will not make the same mistakes.
I will make new mistakes,
MJ
Posted by MJ at 11:11 AM