I hate to break bad news but The Prices Go Down Party beat The Earth Party to win the fake 5th Grade election. Even worse, it got ugly at the end -- someone stole the Earth Party's seed packets so they had nothing to distribute to their potential voters. It was a real scandal. 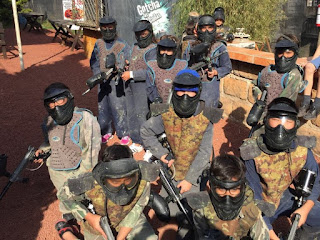 So The Earth Party decided to arm themselves and go kick some Prices Go Down ass.
(not really, this is Lucien at a paintball birthday party)

Lucien came home red in the face and fuming when the seed packets disappeared the day before voting day. Then the pacing commenced at home because someone had also misplaced the Earth Party t-shirts, which the entire team was supposed to wear the next day. And then, insult to injury, Lucien yelled, "And Mom, the sleeping kid next to me kicked me in the nuts on the bus ride home!"

I could not wrap my mind around all the injustice my child had suffered in just one day. How to comfort him, I did not know.

The Earth Party came in a respectably close second place, way ahead of The Donut Party -- whose members were actually campaigning for fewer donuts on school campus and more health food, a platform that likely makes them the most deceptively named and least popular political party in elementary school history -- and The Flower Party, whose members wanted to plant trees in the middle of the soccer field for more shade on hot days.

We can all agree it was a two-party race from the get-go. Aren't they always.

In one of the stranger tales of my life, I had a panic attack at a hair salon. I decided at the very last minute, the day before we left, that I needed a haircut before our trip to Costa Rica. Costa Rica is hot and humid and I suspected the unruly mess atop my head was going to contribute to the discomfort.

Everything was great at the salon at first; my hair was getting hacked off and tamed by a lovely Australian woman and we were chatting and laughing when I felt a slight tremor. It was a real tremor, like the earth shook a little, and I briefly thought, "Oh no, is this the beginning of an earthquake?"

We all felt it. The ladies in the salon looked at each other with raised eyebrows but since it passed so quickly, we decided it had been a large truck rumbling past the salon instead of impending doom. Everything returned to normal except for my body. My body had taken right the hell off and was really committed to it. My heart began racing, I couldn't breathe very well and I suddenly felt trapped and suffocate-y.

The other ladies seated in the salon noticed the odd look on my face and asked if I was OK. I said I felt "really weird." The lady next to me said, "You're suddenly pale, it could be your blood sugar." That woman was a stranger to me and had foils sticking out all over her head like a dozen shiny antennae, people, but she still got up and ran to the adjacent corner store to buy me cookies.

People can be so good when you need them! And yay, cookies!

So what the hell was that all about? I'd never had a panic attack before and have a vague theory it was related to the plane we were scheduled to take to Costa Rica early the next morning. I don't like planes (funny understatement) but was determined not to let them ruin my anticipation of Costa Rica. It was a a new strategy I'd adopted; I'd been refusing to acknowledge airplanes for weeks. If airplane thoughts popped up, kinda like, "Hey there, girl, I was just wonderin' how you're getting to Costa Rica..." I would interrupt with a "YOU SHUT UP RIGHT NOW PUNK," shove that stupid thought right back to where it came from, and walk away whistling.

I thought it was working pretty well until I bolted out of my chair at the hair salon. Then I wasn't so sure.

Maybe planes are sneaky little bastards who will ruin your day if you refuse to acknowledge their existence. Maybe planes will not be ignored. There's probably a good lesson in there somewhere, something about dealing with your fears head-on instead of ignoring them or whatever, but my takeaway is I probably just need a prescription for Xanax.

I have much to say about Costa Rica, to be written at some vague future time. It was our favorite vacation thus far and I'm not sure it can ever be topped. Costa Rica is one of the prettiest places you could ever imagine and one of the friendliest, too. It sure isn't cheap, though. 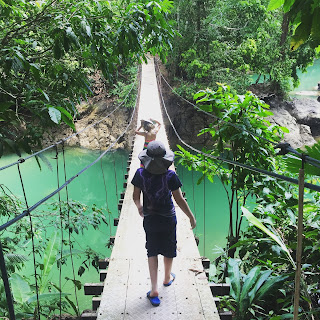 I dream of it still and can't wait to return.
Thankfully, there are no planes involved in getting to Costa Rica.
*walking away whistling*

I took a day-long cooking class Saturday with two friends: another Seattle Mom (I am grateful for the proliferation of Seattle people in my Mexico life because my "adios" in a few months can be reduced to a much easier "hasta luego") and my very first Irish Mom. 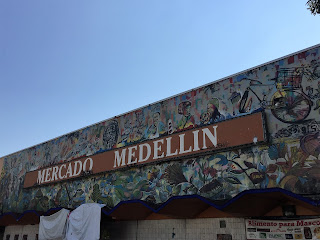 The cooking class began at the Mercado Medellin in the Roma neighborhood. The Mercado Medellin is a market known for its products from many Latin American countries, all stacked high at stalls run by immigrants from those countries for decades. It's one of those markets where, if I entered by myself, I would wander for hours blinded by the bright colors and wondering "What the hell is any of this stuff and how do I make it into food?"

Our teachers were a feisty, funny, talented Mexican chef couple named Beto and Jorge. For Beto and Jorge, it's all about Mexican traditions and Mexican grandmas, as evidenced by how often they say things like, "My abuela used to do it like this" or "This was my abuela's mortar and pestle" or "My abuela would be so mad at you right now because you are definitely not doing that right and are crapping all over our family's traditions." 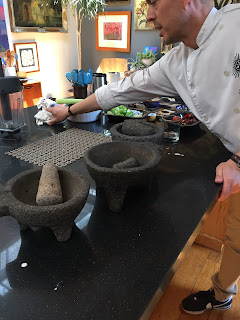 Look at all of those abuela-handed-down molcajetes.

We spent several hours at the Mercado Medellin browsing its aisles and trying its products. We met a Venezuelan man who makes his own hot sauces; we tried several and they set our mouths aflame in a painfully great way. We learned how flour tortillas are made. We learned what to do with all those bins of dried peppers, and what tamarind looks like, and the names of all of those odd looking fruits. It was all so perfectly delicious and interesting, you could (almost) ignore the men walking past with huge pieces of cow carcass balanced on their backs and the stands featuring nothing but whole pigs' heads. 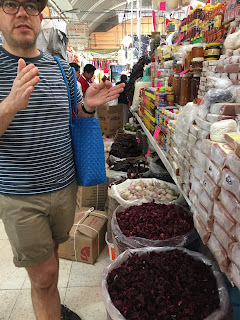 take it away, Jorge

Our favorite booth was the one that sold mole paste because if you didn't know it was mole paste, you would think it was cow poop -- which frankly, wouldn't even be the strangest thing found at the mercado. Gobs of mole paste are slapped on top of each other until they resemble a stack of cow pies but Jorge told us if you buy half a kilo of those cow pies, then thin them with a little chicken stock at home, they turn into a delicious mole sauce you didn't have to spend all day making.

The three of us promptly got in line and bought half a kilo of cow poop apiece because any day now we are going to cook something incredible enough at home to be worthy of that mole sauce. We were so inspired, so convinced of it. 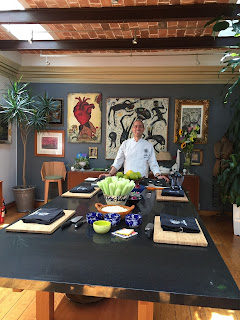 The actual cooking back at Beto and Jorge's house was not as hard as I thought it would be, though I did manage to overblister my jalapenos to the point of heavy black char. Jorge clucked at me briefly for that because he knew his abuela was mad at me. His abuela needs to get a hobby up in heaven and stop watching me screw up her favorite recipes. 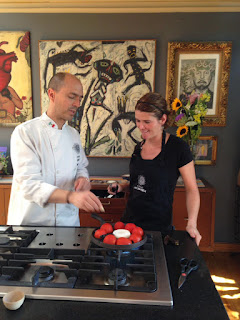 But I did a very nice job grilling the tomatoes and garlic cloves and onion slices
for the red salsa we hand ground with a mortar and pestle. 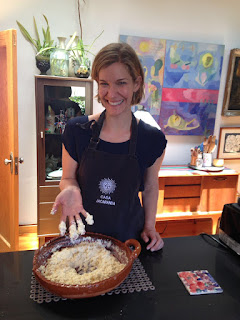 Seattle Mom mixes the filling for the tamales 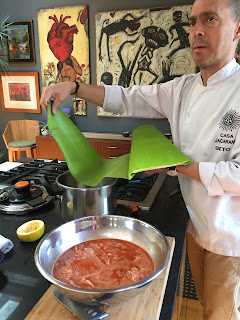 Beto shows how to wrap our cochinita pibil in banana leaves 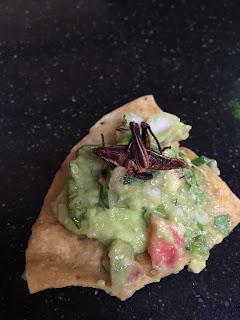 perfect guacamole topped with a fried grasshopper.
Mexico, sometimes you are weird.


One of the most important food lessons we learned that day is "never take the top tortilla." Beto and Jorge would slap at our hands if we absentmindedly reached over and grabbed the first tortilla off the stack to assemble our tacos. The top tortilla gets cold and crunchy quickly, you see, and should be kept in place as a kind of lid to keep all the tortillas below it warm and soft. Also, since everyone ends up touching the top tortilla, it's considered germy and gross. 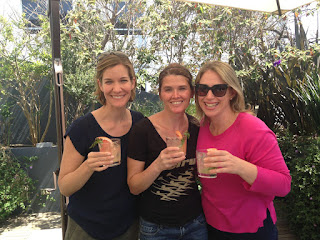 We ate our lunch on Beto and Jorge's rooftop deck
with perfectly crafted Paloma cocktails in our hands.
Not a bad Saturday.

On the way home from Casa Jacaranda, stuffed and happy, Irish Mom suddenly began to crack up. We stared at her mystified until she managed to get out between laughs, "I'm never gonna do a damn thing with that half kilo of mole paste!" We started laughing then, too, because it was true for all of us. It had been a brief, beautiful dream, though.

If you're ever in Mexico City and want to learn how to cook some traditional Mexican food, you can find Beto and Jorge's cooking classes at the Casa Jacaranda website here. You won't be disappointed but their abuelas probably will be. Don't let it get you down too much.

Gotta run, I've got family coming to town. My parents and my brother arrive in Mexico City in a couple days and I am putting together quite an itinerary. I cannot wait to show them the wonders of Mexico. Just wait 'til they see how expertly I can char the hell out of a jalapeno AND maybe reconstitute some cow poop! Finally gonna make 'em proud.

Keep being you, top tortilla,
keep owning your tortilla sexuality...
I agree, it's getting confusing now.
MJ
Posted by MJ at 3:17 PM