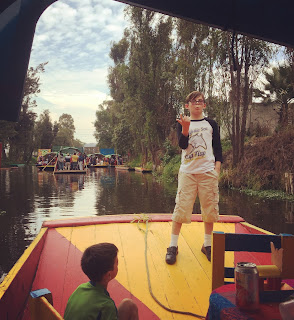 A deadline has been met. The first draft of a very lengthy and plodding War and Peace-like Paris memoir manuscript has been sent to my developmental editor in New York City. There are not enough exclamation points in the world to punctuate that sentence so I'm going to leave them out and go for "calm and understated."

At this point, that beast of a book is 5,000,000 words and is so, so boring. I've stared at the words I wrote back in Paris for so long, they have lost all meaning and I've lost all perspective. I can no longer differentiate between "an interesting story" and "a stupid snoozefest of a story" so said, "f*ck it" and threw everything into the soup.

I included a story, only a few paragraphs long, about me exchanging compliments with the man who owned the boutique outside our building. I included long aimless tales of searching for bottlecaps in the streets with Lucien but -- spoiler alert -- sometimes we didn't find any. I included three pages about a dinner where the climax, and only remotely mildly interesting thing that happened, was Coco pelting me in the head with a piece of pineapple.

The only downside to devoting these many months in Mexico to compiling my humongous manuscript is I haven't lived life to the fullest in Mexico City. From the time the kids head off to school to the time they come home, I don't move much. I stare at my laptop screen, sometimes blankly, for hours -- write delete write delete -- and play with fidget spinners when the words refuse to do what I want them to do.

Mario, our driver, texts me a daily anxious, "Are you sure you don't want to go anywhere today, Ms. MJ?" Paulina, our housekeeper, may suspect I'm agoraphobic and definitely suspects I'm emotionally unstable by the way I scream while aggressively manhandling the backspace key. I don't think Paulina has ever seen me put on real clothing (it's the pajama and yoga life for me) and go outside, but perhaps she also firmly believes that it's in the best interest of the general public.

My submission deadline was the day before my bestie from Seattle arrived. We set that submission date intentionally. I didn't want the book hanging over my head while Seattle Mom was here, didn't want to be distracted to the point of suddenly yelling, "Yes! That's how to make that toilet paper story really pop" and taking off in the direction of my laptop, leaving Seattle Mom confused and alone in the dust of Teotihuacan. 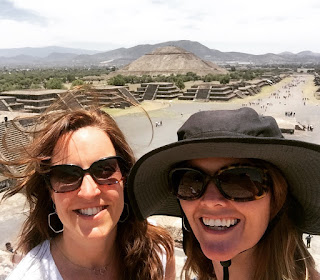 Seattle Mom was our final visitor. I loved seeing all my favorite tourist sites one more time, loved seeing yet another friend who never thought they wanted to come to Mexico City fall in delirious love with the place. Seattle Mom walked through our neighborhood agog, absorbing all the sidewalk cafes lining the streets and the impeccably dressed waiters and the beautiful parks full of lounging people. She said, "It feels just like a European city except everybody is warm and friendly!" 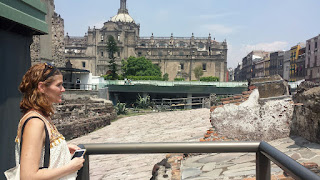 Templo Mayor, the Aztec ruins in the middle of the city 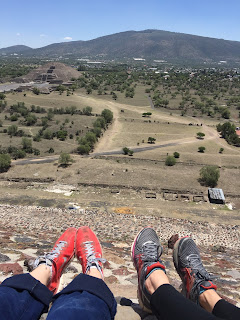 sitting on top of a pyramid looking over at another pyramid 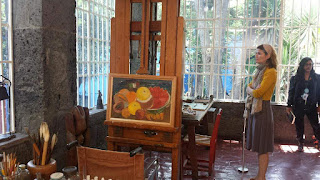 I'm back again, Frida, I can't quit you 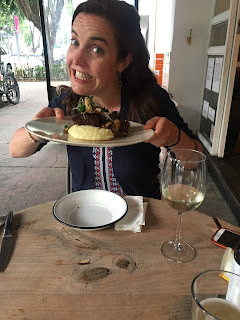 we ate the best food 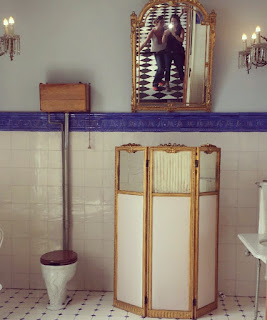 We took Seattle Mom on a day trip to Tepoztlán, one of our favorite towns about an hour outside the city. Tepoztlán is charming, not touristy, surrounded by mountains. It's the type of authentic Mexican town where cars often share narrow streets with old men riding burros. 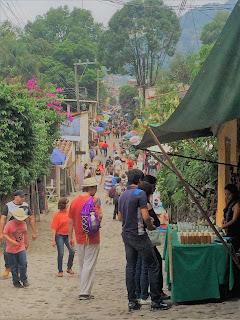 Tepoztlán is one of the dozens of "Pueblo Mágicos," or "magical villages" to be found throughout rural Mexico. Pueblo Mágicos are villages whose cultural, historical, or natural treasures have been deemed -- surprise! -- magical. They transport visitors back in time, far from cheesy all-inclusive resorts and buffet dinners and cheap fruity cocktails with tiny umbrellas in them. The Pueblo Mágicos are truly the Mexico worth getting to know. 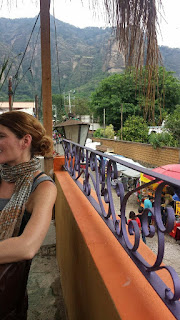 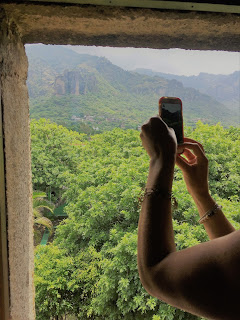 The Tepozteco pyramid sits atop a mountain overlooking Tepoztlán. The hike up to it was originally described to us by friends as "a moderately strenuous walk, just a lot of stairs" but in reality was "a stupid hard climb with no 'stairs' to be seen, only slippery boulders occasionally placed in stair-like formation, better suited for a mountain goat to climb than a human being." 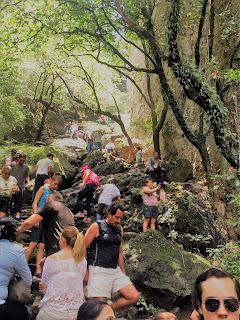 It seems our friends and I
do not share the same definition of "moderate"
nor "stairs."

It was much harder than we anticipated. It was also crowded. We also had Lucien and Coco but, thank the ancient Tepoztlán Gods, they were intrigued and excited by the complexity of the climb instead of made crabby by it. They did not complain on the hour long slog straight up the mountain, a fact that seems to lend credence to the belief Tepoztlán is magic. 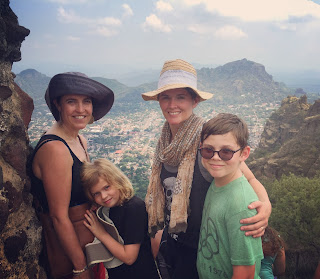 Something had gone terribly wrong with our hats
by the time we reached the top.
Seattle Mom's no longer wanted to hold its shape
and mine sat ten feet off the top of my head.
Everything else was great, though.

Seattle Mom doesn't speak any Spanish so I was in charge of our Spanish-speaking needs during our Mexico City wanderings. It made for some great comedy. Sometimes I would ask a question and get an answer back in a rapid torrent of unidentifiable words. As the speaker spoke his incomprehensible message at inhuman speed, I would turn to Seattle Mom, smile big and say, "I have no idea what's happening right now." Then we would laugh and laugh and walk off, never having learned the answer to our question. That's OK, we like a little mystery. 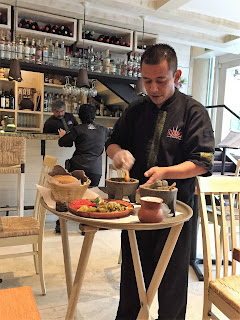 I'm not sure what I told this server
when he asked what ingredients we wanted in our salsa.
But I must have told him something
because he hand ground it right there in front of us.

Alex and Coco are back in Seattle for two weeks. It's a long story (and one that caught us by surprise) but to make it short, the only way to guarantee Coco's spot at her school in the Fall is to have her finish out this academic year as a "short term returning student." Alex had to go back to Seattle for meetings anyway so I packed her a suitcase and off they went.

Her return to her old school was glorious. She was treated as celebrity. I hear there was a lot of hugging, squealing, jumping up and down, and crying. Coco loves her friends and her teacher in Seattle and has talked about them near constantly since we landed in Mexico over six months ago. It's obvious Coco left her heart in Seattle and I'm happy she's been reunited with her people.

I've never been away from her this long, though, and it's weird and I don't like it. At least I know she's in capable and lovably nutty hands. I called upon our circle of friends for help with childcare and ended up with a complex spreadsheet entitled, "The Coco Shuffle." Coco has indeed been shuffled to school, to houses after school, to birthday parties, to sleepovers, all by our people while Alex attends work meetings and late work dinners. We are lucky and grateful.

There was another happy reunion in Seattle -- 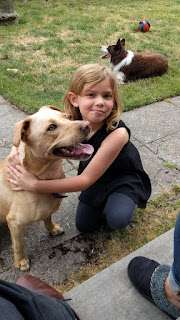 Natani apparently "lost her bananas" when she saw Coco, one of her two most cherished tiny people in the world. She was later inconsolable when Coco got back into the car to head to the next leg of her shuffle. She sat at the window and whimpered for hours, straining for another glimpse of her favorite girl out the window.

My heart hurts for her. I promise she's coming back for good soon, doggo.

Lucien and I are enjoying our one-on-one time. It's such a rarity. It reminds me of Paris in a way, just The Loosh and I taking on a foreign city all day long. We are celebrating our time by going out to eat often at our favorite restaurants and watching many movies, some at the theaters but most at home after school. We're being selective about what we watch, choosing only the most promising titles from the Netflix and Amazon Prime menus, such as this obvious award winner -- 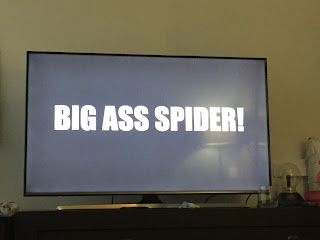 Now that the manuscript is out of my hands for a whole 4-6 weeks, I've got time to blog again. There's so much to catch up on, so much I'd like to capture before we're gone. I sure hope I get to it all. I should also leave the apartment sometime soon so Paulina and Mario can stop worrying about me.


PS. For the record, it wasn't a misnomer. That was truly a big ass spider -- 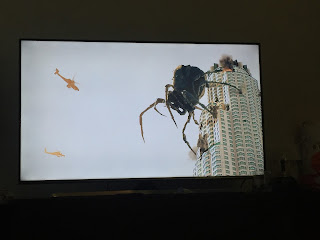