Posse, thanks for the love after my last post. Phew. It was not an easy one to write (obviously, it took me months) but now that it's on the screen, I feel freed up in an incredible way. I dreaded sharing the news with all of you, even though I've never met most of you. I felt I was going to disappoint you in some way, that despite all our adventures in Paris and beyond, which hopefully you enjoyed once upon a time and cheered for our little family, Al and I couldn't hold it together in the end.

It is what it is and I hope you will still hang around. Alex will still likely be a guest star here on the regular, such as in the Spring Break post I'm about to write. We also spent Easter together yesterday with our crew of best friends. Always a lot of laughs. It's a big crew and our kids have grown up together. They all fight like siblings. Chosen family can be as awesome/tricky as real family.

I'm sure it's confusing for the friends that Alex and I can still hang out together and have a good time yet don't want to be together as a couple anymore. I think they're happy they get to keep us both, though, so they're not making too big of a fuss about it. 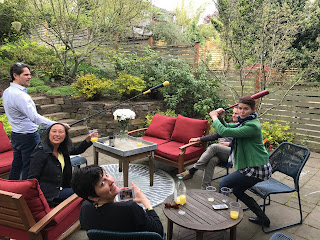 Most of the parents had gone with our collective children to the egg hunt nearby.
We didn't. We are old parents tired of egg hunts.
Instead, Alex held some sort of dildo-looking baseball training thing
and I swung at it with a bat. 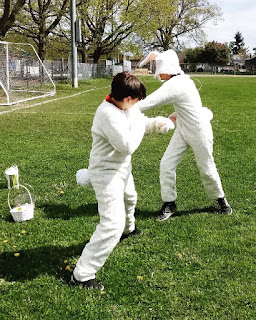 Lucien and his bestie.
Seattle Mom sent this to me with the caption
"Bunnies gone bad" 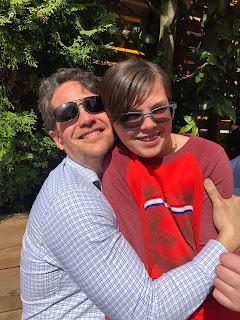 Spring Break was a beauty. An ambitious beauty. I may have packed more into this road trip than most road trips. I roused the kids from their sleepy beds a few days in and said, "Guys, time for Day Three!" and Lucien groaned and said, "Jesus, Mom, it feels like Day 39."

There's just so much to see in California. Good thing for the kids I cut out half of the itinerary right before we left because I finally figured out we are not superhuman.

That's it for now. I'm tired. Easter was exhausting with the bat swinging and the bunny fighting. I've got plenty to share about California but for now, even I am overwhelmed by my own trip and can't get there yet.

Before I go, I will address my love for Notre Dame. The pompiers of Paris are heroes. They are also unfairly hot looking people but that is not related to their hero/heroine statuses. Virginia Mom used to trail the pompiers on their training runs through Luxembourg Gardens in the early mornings. If I had been a runner, I would have done the same. What a fantastic motivation to run, both to chase the hot people and to hope that the running will make you exactly as hot as them someday.

I am reminded of the time the pompiers came to our apartment door selling their annual pompier pretty people calendar and Lucien told them at length about the bag of Coco's poop-filled diapers sitting next to our front door on its way to the garbage. He just kept saying "caca" and pretending to poop. It was awkward. I should have bought more calendars.

I'm grateful I saw Notre Dame on the regular back then, walked in front of it a couple times a week since it was a 10 minute walk from where we lived in Saint Germain. Towards the end of our years in Paris, I sometimes didn't even glance up at the towers when I walked nearby. It had become everyday and old news.

I should have looked up every single time. The extraordinary should never become the ordinary. 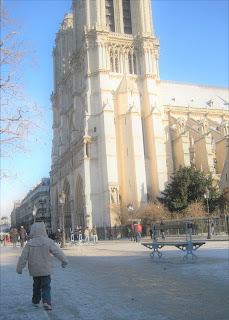 Following a three-year-old Lucien to Notre Dame.
He loved it.
But was suspicious
after I told him about Quasimodo living up in the towers.

It's a whole new world here.
But life goes on, mes choux.
MJ