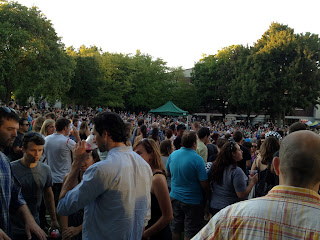 Here's an ode to summer crowds.  I've been involved in a few lately.  I like crowds because of all the rubbing up against people you don't know.

First there was the KEXP Concert at the Mural, which involved emo indie bands playing the Mural Stage under the Space Needle.  Also, hipsters wearing fedoras. 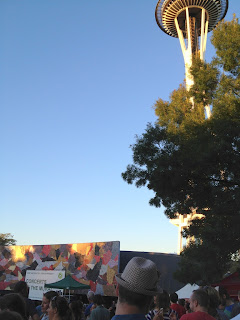 Then there were the Blue Angels at the beach.  Now that the weather's finally gotten blasted hot around here, our beaches are full of pale human beings blinking at the sun.  I love the smell of Coppertone on a hot day even though I don't apply it often enough and get sunburned. 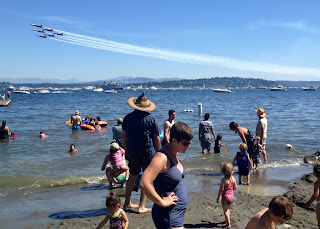 Crowded beach, sand in our sandwiches, lost toy shovel.  Worth it to see aerial magicians. 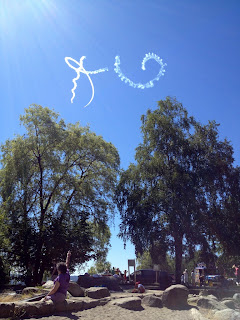 An ode to the Artist Formerly Known as Prince?


Lucien has logged onto the math program used by his school a few times this summer.  I noticed recently the icon he uses for his login.  While others in his class have chosen more "traditional" representations of themselves, Lucien has gone a different direction -- 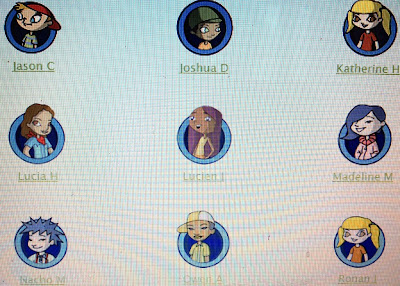 Lucien's the one in the middle

(Which made me wonder -- at what age do kids get all, "You throw like a girl!?"  Perhaps we're still too young for that nonsense.  If I hear Lucien or any other child say something along those lines, I'm going to say, "That's a dumb thing to say because I'm a girl and look what I can do," and then *whooooooooosh* I'm going to throw a ball around planet Earth.)

Back to my point.  I asked Lucien, "Why did you choose this girl as your icon?"  I steeled myself for his response -- if the boy told me that he, in fact, identified as a girl, I was going to wrap him in a huge hug and yell, "I LOVE YOU, MY DAUGHTER!" because I'm supportive like that.  Instead, Lucien looked at me like I was one dim bulb and said, "Mom, she has PURPLE HAIR"  and walked away in slight disgust, totally bummed his mom couldn't recognize awesomeness when she saw it. 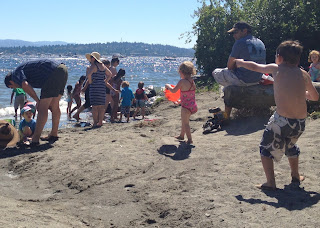 If you think this is a photo of Lucien pointing and yelling, "BUTT!" you are correct.


Another crowd-infused night involved the block party over on The Street of Dreams.  Even though we didn't get The Goddamn House and don't live there, The Street of Dreams still treats us as one of their own and invites us to all "family" functions.

I rode Lucien's scooter to the block party because I was running late.  I saw the scooter leaning against the wall and thought "Perfect!  Marginally faster than walking!"  The babysitter asked, "Are you really going to ride a scooter to your party?" and I said "Yes" and scooted off down the street.  I could hear her laughter all the way to the corner.

It was a treacherous journey because scootering on hills is hard.  I fell down a few times so walked the scooter for a bit.  The terrain flattened again at the Street of Dreams so I hopped back on, just in time for Contractor God to walk out of his house, see me and say, "My God, you're a delinquent."

Feel the love on The Street of Dreams!

The Block Party was an evening of debauchery, as family-oriented block parties tend to be.   It went very late, and while I myself did not get drunk, I saw many of my comrades fall to the drinking sickness worse than they've ever fallen before.

It seemed a great idea to invite the Seattle Police Department to come meet the kids and hand out SPD stickers, but less so when our friend's inebriated wife put the stickers on her boobies and proceeded to talk to the officers three inches from their faces.  There was much hissing back and forth between the rest of us, "Oh my God, somebody make her stop." 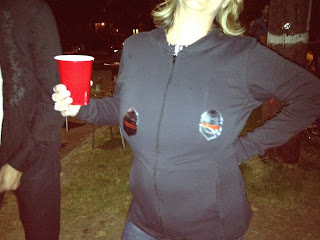 As I took this picture of SPD Boobs, Seattle Mom yelled "It's OK, she cuts off faces!" and pointed at me.  Seattle Mom had only wanted to let SPD Boobs know she would be anonymous on my blog but SPD Boobs knew nothing of my blog so the comment confused and frightened her.  Without context, that quote is quite jarring.  SPD Boobs didn't spend much time with me after that.

Seattle Mom and I went to another Concert at the Mural last night.  The bands playing were old Seattle grunge bands so the crowd was decidedly older and grungier than last time we went.  In fact, Seattle Mom and I, in our sundresses and semi-made-up faces, were the only ones who seemed to put any effort into appearances whatsoever.  We stood out so much, I told her, "My God, we look like prostitutes."  Many prostitution jokes followed because everyone knows prostitution is hilarious. 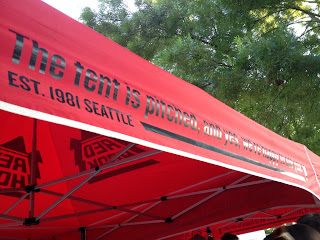 This is the tent at the beer garden.  It says, "The tint is pitched and yes, we're happy to see you."  They must have been talking to us because we're the only women who looked like women there.


This was a guy changing his shirt in front of us.  I never saw him from the front.  Can someone tell me what that strap is?  I got nothing -- 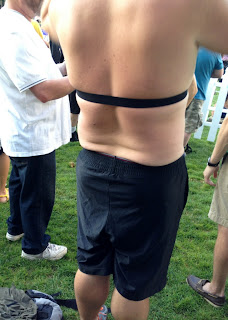 We stopped by German Seattle Mom and Dad's place on The Street of Dreams after the concert because the party never stops at their house.  We had a contest while sitting on their front steps; it was called "what would you name your band?"  Supermodel Neighbor had a contender with "Silhouette Panties" but German Seattle Dad brought home the win with "Buttermilk Warriors."

My mom and dad came to visit last week.  They didn't stay long, just a quick trip "to see the grandkids and the house."  Umm... hello?  I expected to be replaced in their hearts by my kids, but not my house.  It stings a little. 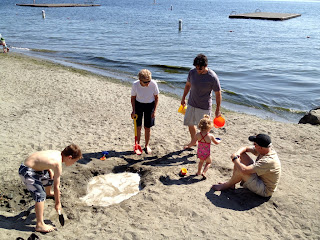 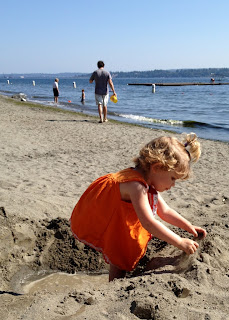 My Dad and I went to get some barbecue at a C.D. barbecue joint where a man named Pookie makes the best pulled pork and brisket.  Pookie chatted with us a little bit then said to me, "I don't always tell people they're blessed because it's not always true, but YOU.... you are truly blessed."

He said this because he couldn't think of anyone in his life who could say they still had both parents, both in good health, both pretty damn great and still married coming up on 50 years.

Aside from their good health and good marriage, it's true, I'm blessed to have my parents.  I hit the parent jackpot even though they sometimes do questionable things such as fight with my son over a ridiculous monkey game that involves something called "a banana pile" (My Dad insists he won his banana pile fair and square but others aren't so sure). 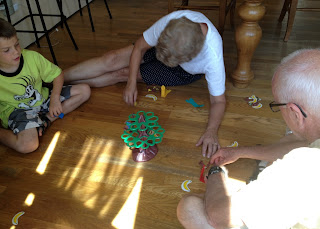