Welcome to this fantastic episode of Wild Banister Abbey Kingdom.  (It's an obscure show, don't worry if you've never heard of it.)

Banister Abbey has mice.  This fact first became evident a few weeks ago when Al and I were watching the Olympics in our TV room.  A mouse suddenly ran in front of us like the ballsy little jerk he is.  Al and I yelled in unison, "Oh great, we gotta deal with you now, too, asshole mouse?" and punched some walls in fury.  In our defense, it had been a long week of Banister Abbey renovations.

I purchased a humane mouse trap, the type that captures the mouse but doesn't kill it so you can re-release it into your enemy's backyard.  I have many enemies so this is a nice feature. 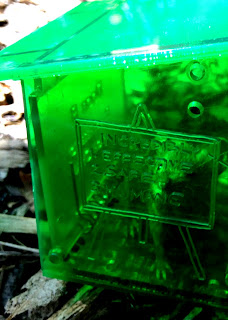 We've captured a few mice with the trap and re-released them into the same area so they can hopefully find each other again.  Picture the mouse family reunion!  The joy!  That is, if they weren't eaten by much larger animals within thirty seconds of freedom.  If that indeed happened, I hope it didn't happen as they were running towards each other -- "My beloved mouse brother, where you been??  GAH!  PUMA!"

After the mice, we ran into this bastard.  Also in our TV room -- 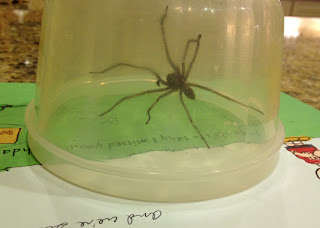 I saw it on the carpet, backed out of the room slowly, and asked Alex if he'd by chance purchased a large scary spider toy for the kids recently.  He said no, so we crept back into the room armed with a plastic storage container and the birthday card my mother sent Al.  It was an effective spider-capturing duo.

We attempted to identify the spider to see if it was dangerous -- even though huge and scary, I didn't want to kill it if it wasn't necessary -- but in the middle of the identification process, Alex freaked the f*ck out and squashed it.  He felt better afterwards.

We found another one in the TV room later that week.  I captured it again and kept Alex and his itchy spider-killing fingers far away from it.  Our workmen came the next morning.  One of them, Dan the Man, sat down with a spider identification chart and gave us the verdict: it was a Hobo Spider, one of the few venomous spiders we have in the Pacific Northwest.

We will likely never go in the TV room again.  A shame, really.  Good light in there.

Lucien attended a sports day camp recently.  One day, he opened his lunch box and discovered a maggot inside.  Turns out the strawberries I threw into his lunch weren't so fresh.  He showed the strawberries and the maggot to every counselor at camp.  When I came to pick him up, they most definitely did NOT hoist me up onto their shoulders and chant, "Mother of the Year! Mother of the Year!" for many hours.  Thank God the day camp is over and I never have to see those people again.

The workmen have recently ripped apart the front of our house.  This has happened not a moment too soon because it's revealed our impressive front entry is built on a house of cards -- or, more accurately, loose piles of rotten wood.  It's a Labor Day miracle our entryway is still standing.

While tearing apart the front porch and balcony, the workmen discovered many wild things up in the ceiling, all of them dead, all of which they saved for Lucien to examine.  This is our best specimen so far -- 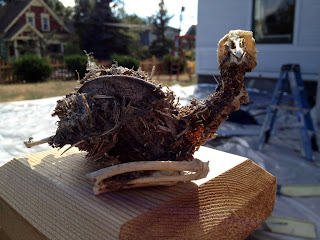 In keeping with the Wild Kingdom theme, here's Lucien wearing a purple snakeskin jacket he found at Seattle Mom and Dad's house.  We all decided it was appropriate for Lucien to be wearing such a thing but I'm not sure what any of us meant by that -- 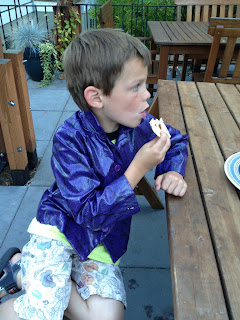 Here's Coco, who has taken to standing on coffee can "stages" and singing into marker "microphones."  She's also got some signature moves, one of which, thanks to her big brother, is smacking her own butt and howling like a wolf.  Just really fantastic stuff happening there. 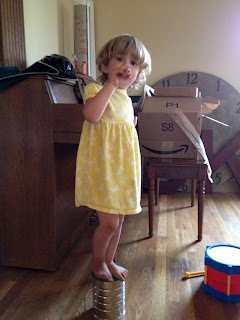 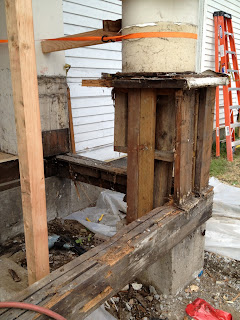 The thing tethered to the house with an orange strap is an 18-foot high fiberglass column that weighs approximately 600 pounds.  It was perched upon some random pieces of wood under the mesh block thing, most of which were rotten, all of which moved when I pushed on them.

You're lucky we got you, Banister Abbey.  Without us, you would have fallen to the ground in the very near future.  All you passersby are lucky we got the house, too, because when the columns went down, they would have taken a few of you with them.

Have a good Labor Day weekend, friends.  We're having a party.  Here's hoping it's fun.  We will dare the children to play a game of "chicken" in which they will take turns running up to the dangling columns and pushing on them.