Get your plums off my windowsill 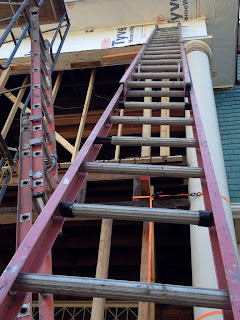 Surprise, everyone, we're still renovating our house.  It was recently my job to carefully chisel off the century-plus buildup of dirt, caulk, paint, glue, whatever (I called it "lead-laden potpourri") that was caked on the frieze so it can be repainted (the frieze is the sculptural element that fits into the middle of the triangular pediment over the balcony over the front door.  I know you are fascinated.)

First I used a small chisel to chip-chip-chip at the frieze then I used a dremel tool to vroom-vroom-vroom.  It took forever but I love work like that -- the kind of work where you can get lost in your thoughts for hours.  After about thirty minutes I realized how weird my thoughts are and spent the rest of the time compiling mental lists of people I had to tell about them. 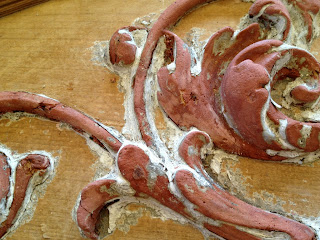 Before -- an unacceptably gunky frieze 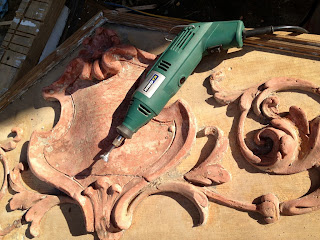 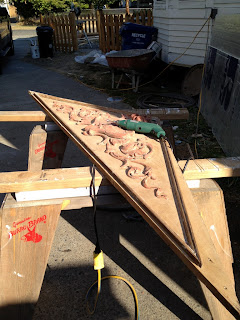 I worked alongside our normal team of guys for a couple days as I cleaned the frieze.  I kept wondering when we were going to start scratching our balls and talking about chicks.  It never happened, likely because I didn't know the secret pre-ball scratching password.

Which reminds me -- Contractor God has plums.  Really great plums.  Many friends have spoken fondly of Contractor God's plums; some have even boiled and crushed them into a fine jam.  I winced when I heard that, too.

Contractor God asks me all the time if I want to sample his plums.  He says he can "put them in a bag and bring them over tomorrow."  I can't tell if it's a sexy joke or not, so today I yelled, "Keep yer damn plums away from me!"  He seemed confused so I explained I just really didn't know what to do with his plums.  When Contractor God then said, "you just put them on your windowsill until they're nice and ripe,"  I said, "Don't put your plums on my windowsill, you sick freak, what the hell is wrong with you?"

He walked away.  I may have missed out on some great plums but that's the price you pay for being hysterical and confused.

For those of you still around from ye ole Paris blog, we had a visit from one of the featured players of that blog over the weekend.  Remember our English friend, Newcastle Guy?  Newcastle Guy was in Tacoma on business last week and came up to see us over the weekend.  I found him wandering around outside the front of our house trying to figure out how to get in.  Thanks to the construction covering the entire front, we really don't make it easy.

I welcomed Newcastle Guy back into our lives with great emotion and great joy.  It was strange to see such a Paris-themed friend sitting at our dining table in Seattle, but there he was anyway.  He still looks like Jake Gyllenhaal.

I departed from our previous fancypants Paris ways and handed him a PBR (and in a can to boot!)  He looked at it suspiciously, sipped it, then made many horrible sour faces.  I told him it was a hipster beer -- because it's ironically awful! -- and therefore acceptable to drink in Seattle.  He then asked me repeatedly to define "hipster" but I really couldn't.  I know irony is key.  I think I may have gotten frustrated and sputtered, "Hipster is a state of mind" a few times, which didn't help Newcastle Guy's understanding of these complex beings.

Newcastle Guy choked down a couple PBRs then asked if we could order a nice wine at dinner.  I think he was worried hipster wines existed, too.  (They probably do -- anyone know of any?  I'd like to serve them in a glass full of delicious irony.)

We went to Poppy on Capitol Hill.  I recommend it highly. 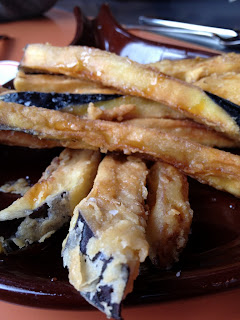 eggplant fries coming at your face 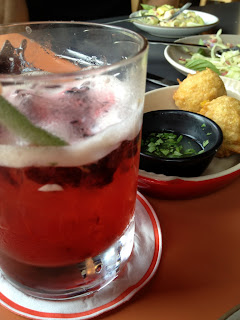 a delicious cocktail with some delicious fried ball things.  Not plums.

The food was incredible but the company so-so.  Newcastle Guy and Alex can be quite crusty and curmudgeonly individually and the problem gets exponentially worse when they're together.  I suggested they chat with a crack whore up on Aurora Ave. to put the relative awesomeness of their lives in perspective but I realized the point was lost when Newcastle Guy said, "She gets to make her own hours!"

We put Newcastle Guy in a taxi back to Tacoma.  He wasn't interested in trains and none of us were in any shape to drive, so into a yellow cab he went.  Tacoma is about 45 minutes away so the trip wasn't cheap.  Between the PBR in a can and the hundreds of dollars spent in a handful of hours, Newcastle Guy may be happy he's not in our lives very often anymore.

My in-laws arrive this weekend.  Soon thereafter, Al and I are going to Hawaii.  The two of us.  No kids.  We are looking forward to it the way a hipster looks forward to a concert by that band you've never heard of.

As always, I am eternally grateful to my in-laws for taking care of our children so we can get away.  I'm also hopeful they're not offended we yell "SEE YA!" and run out the door pretty much every time they arrive for a visit.

Here are a few awkwardly placed and random photos to leave this post on a scattered note:

Coco got some red boots, never wants to take them off, has slept in them twice 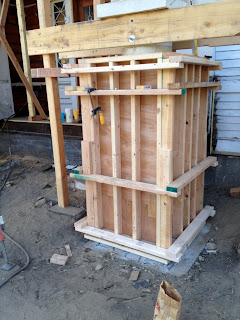 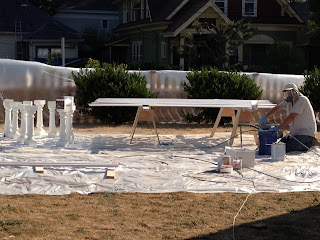 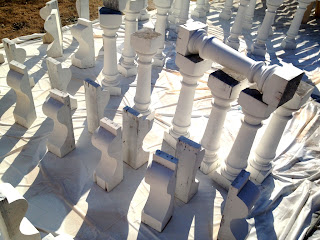 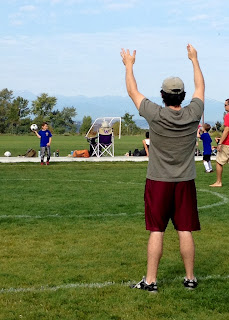 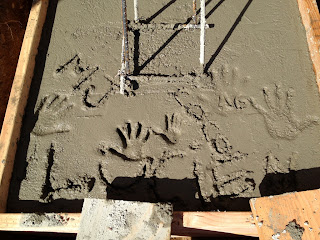 we put our hands in cement at Banister Abbey.  One of the hands is Contractor God's which is appropriate since without him our house would have fallen down already 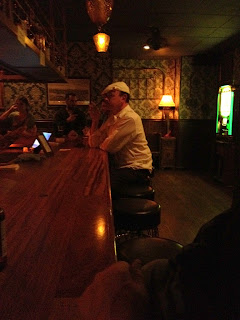 I went out with some people and saw this guy at the bar.  Attempted hipsterdom?  Drunk golfer?  Lost gendarme?


I'm now officially sick of writing about plums and hipsters.  Time to go to bed.
MJ
Posted by MJ at 10:34 PM