Everyone make it through that one? 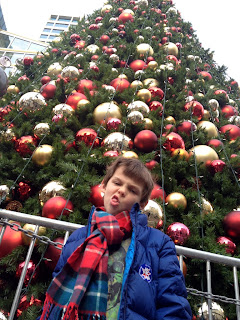 Our holiday season was happy but a lot of stuff got away from me this year.  I didn't send Christmas cards like I usually do, and the present I bought two months ago for my brother is still sitting here on the floor.  It's wrapped and ready to go, has been for weeks, but getting to the post office is hard.

While I'm in confession mode, might as well alert my sister and my mother, one of whose birthdays was almost a month ago, that their birthday cards are still on my desk.  It doesn't seem to be my year for handling mailing details.

Our holiday was full of good family times.  Al and I took the kids to the Washington State History Museum in Tacoma for the model train fair. 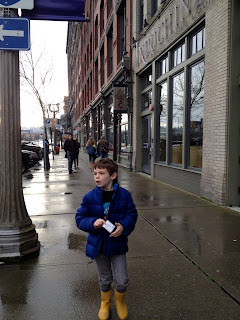 Tacoma, we are in you

Our kids love tiny trains so came armed with millions of questions about how they were made.  They didn't get many answers, though, because model train enthusiasts tend to be rather introverted people who can't speak or answer questions in any coherent fashion. From my observations, they appear to avoid eye contact and interaction because it frightens them. 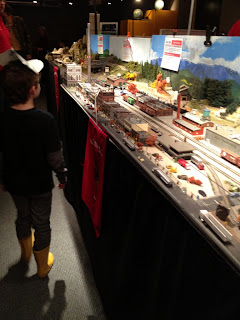 Alex, with his customary loud voice and larger-than-life bravado, was frustrated in his attempts to communicate with the choo-choo artisans.  He couldn't understand why they skittered away from him and hid under tables.

Fortunately, I speak Introverted Model Train Nerd and was able to coax them out by speaking softly with a singsong tone to my voice.  They liked me so much I was granted backstage access through a swinging door that said KEEP OUT so I could look at the model buildings along the back wall.  One was a candy factory; the people inside were making tiny almond roca, delightful! 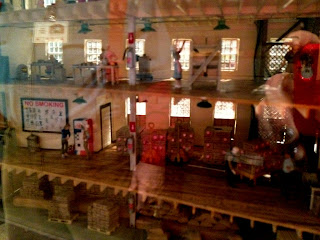 My kids looked pretty disappointed on the other side of the plexiglass but I just pumped my fist in the air and yelled, "Kids, look, mama's finally a SOMEBODY."

Even as I celebrated my VIP status, I was preoccupied.  My beloved Parisian houndstooth coat was in the unattended coat check downstairs and I was convinced someone was going to steal it.  Halfway through our visit, even as Alex yelled after me I was being paranoid,  I ran downstairs to retrieve it and held it close to my body from then on. 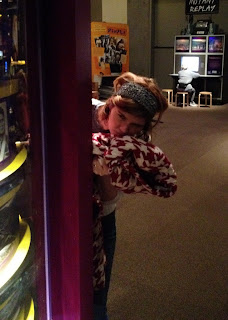 Santa came to visit the kids at the museum.  We'll get the official photo in a couple weeks but until then, this blurry one will have to suffice to preserve the memories. 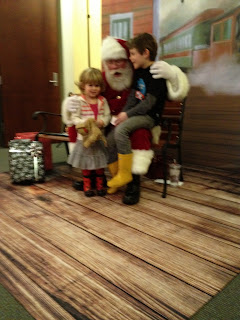 My mom warned me about taking the kids to see Santa Claus too late.  She said kids will always ask Santa for something at the last minute, something you didn't see coming, and you'll be unprepared.

The model train geeks startled and dove back under tables when they heard me yell, "What the F*CK???" from Santa's Jolly Christmas Corner.

We left the model train exhibit and drove directly to Toys-R-Us where I told Alex to keep the kids distracted in the parking lot (he attempted cartwheels, it was terrifying) while I went inside to fight a giant toy store three days before Christmas.  In a related thought, people are goddamn insane and I don't know what's wrong with any of us.

It was bumper carts in the store and everybody was grumpy/scary.  I'm from Ohio, though, so automatically smiled and chirped out some cornfed "Thank You"s when somebody decided NOT to decapitate me for taking the last Etch-a-Sketch. (Because Coco apparently suddenly loves Etch-a-Sketch, what the HELL happened with Santa?) 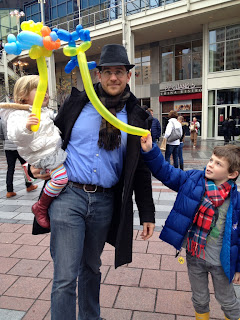 There was time spent in downtown Seattle before Christmas.  It reminded me of our Christmas last year when we lived in Belltown, right after we moved back from France.  That was a bittersweet memory.  A year ago already?  It feels like just minutes ago we were celebrating Christmas in light-strung Saint Germain and being firmly reprimanded by the Parisians (as per my usual).

We went to Seattle Mom and German Seattle Dad's house Christmas Eve for dinner with friends.  Quite a few of us decided not to travel this year so the crowd was a sizeable, stress-free one.  The food was delicious and the company pretty drunk.  Thank God for the drinks, though, because the kids put on a "play" that was directionless and seemed to go on forever.  Only one kid cried, though, so that was good. 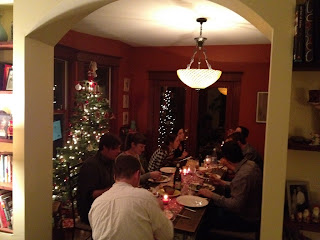 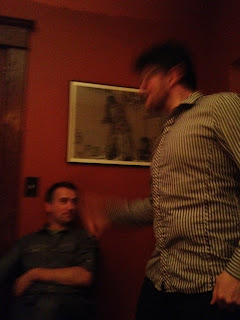 Back at home, Alex and I attempted to play Santa through the haze of champagne cocktails and food coma.  I stared at the directions to Coco's princess castle and thought, "Man, I am not gonna make it through this."  Alex wrestled with the parts to an artist's easel next to me, hissing the "F" word periodically and saying things like "this damn easel has 47screws."  It's impressive what parents endure to keep the magic alive for their young kids at Christmas.

The next morning, the kids' eyes were big as moonpies (Coco's especially, Lucien has always been a bit of a skeptic) when they saw the loot under the tree.  Coco could barely speak, could only point and stammer "San..?  San..?  San....?" with a rapturous look on her face.  And that's why we do it. 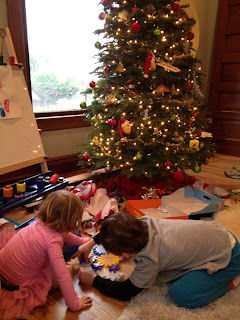 Hope everyone had good holidays.  Or at least made it through with a sigh of relief.