The wide world of sports 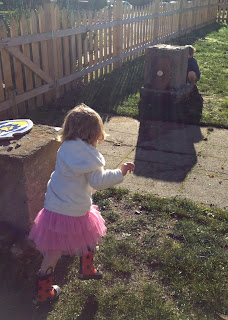 Here are the kids playing a game called "Castle."  In this game, you face your opponent and throw rocks at them, inflicting as much bodily harm as possible.  The most successful "Castle" players have quick reflexes and can duck behind the concrete pillars (which we dug out of the ground during Banister Abbey's facade renovations) before taking a rock to the face.

Alex and I were in the yard fixing his bike.  We were so engrossed in covering ourselves with bike grease we didn't notice the violent game happening ten feet away.  By the time we looked up, both kids were injured and very mad at each other.  They each said things to the other that can never be unsaid.  I hope their youthful brains forget quickly; otherwise, all future family Christmases are doomed to be tense.


Speaking of games, I was a football fan for a few hours last week.  Our Seattle Seahawks were in the playoffs and looked to have a pretty good shot at the Super Bowl.  In retrospect, of course, we had no chance at all because the Seahawks will always break your heart. 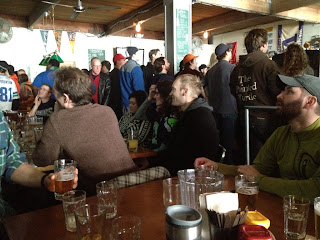 I joined a handful of friends at our local sports bar where we commenced drinking beer at 10:00 a.m. 10:00 a.m. is a strange time to drink beer but we don't get to choose the start time of the game.  We can only blindly obey and put beer to lips when that kicky guy kicks the ball down the field and people start running all over the place on the TV.

The Seahawks were down 0-20 at halftime.  My football fanatic friends didn't want to talk much at that point, just wanted to search their smart phones for a ray of hope.  They looked up stats for teams who came back to win after such a miserable score at the half.  The search results were not comforting so my friends then sat there looking grumpy. 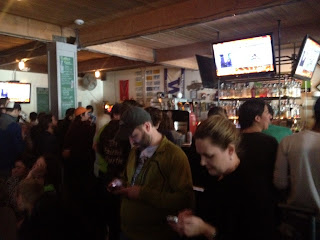 Then, in perhaps the greatest comeback in NFL history, Seahawks scored and scored and scored some more.  They scored like they'd known how to score all along but just wanted to mess with us.  The bar turned into a madhouse.  Every time the Seahawks did something worthy of applause, they got more than applause from our bar, and likely every other bar and living room across the entire city -- they got screaming and fist pumping and crying and people leaping through the air.

The man at the table next to me, a large man wearing a Seahawks jersey with the name "FAN" written across the back, was suddenly my very close friend.  As we stared intently at the screen together, we clenched hands.  He dug his fingers into my arm on several occasions and yelled the "F" word.  Sometimes he kicked my leg under the table and it really hurt but I didn't blame him -- it was apparently his "tension release" leg so regularly shot out with no warning and caught me about the shins.

When the Seahawks scored, "FAN" and I jumped into each others arms and screamed into each others ears.  He nearly knocked me over a few times, running me into a few tables which resulted in some really ugly side thigh bruises.  I didn't notice the pain because I was too busy high-fiving every goddamn person in the bar.

I may not watch a lot of football but I can absolutely get behind an event that puts every single person in a bar on the same page, every person bonding with every other person because they're all fervently hoping for the same outcome.  I get it -- it's really really great to be a home team fan.

Seahawks were winning 28-27 at the end of the game, only twelve seconds left to go!  Everyone in the bar was on their feet, pulling their hair and screaming!!  We were gonna do it!!!

Then the Falcons kicked a field goal and it was over.  We lost.  The crowd packed up almost immediately and left the bar, quiet, dejected, heads down.  "FAN" didn't even say goodbye to me but I have my ugly leg bruises as a reminder of the love we briefly shared.

(When I changed into my pajamas that night, Alex looked at my legs in horror and said,  "Oh my God, did they take the Seahawks fans out back and beat them after the game??") 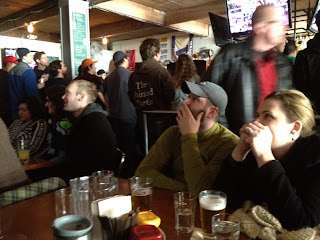 Al and I take the kids to swim lessons Saturday mornings.  They have lessons at the same time so Alex gets in the water with Coco and I sit by the side of the pool to watch Lucien.  Lucien is still more interested in entertaining his fellow swimmers than actually learning to swim.  It's fun to watch the instructor's confused face as Lucien tells him fart jokes while clinging to his torso for dear life.

Al is also still an entertainer.  He waved at me sitting at the edge of the pool and yelled, "Hey, MJ, watch this!" He then sat Coco upon a floating mat and pulled her around the pool.  She was delighted.

Alex, caught up in the joy of a moment shared with his precious baby girl, swung the mat in one direction then inexplicably whipped it in the other direction, causing Coco to lose her balance and fly off the mat into the deep end of the pool.  Alex yelled, " SHITSHITSHIT" in the echoey family-friendly pool establishment and paddled/lunged to where Coco was flailing around in the water.

Another parent sitting at the side of the pool grabbed my arm in horror and said, "He did NOT just do that!"  I confirmed that yes, he had, in fact, just done that and she said, "Oooh, I bet he's in trouble when y'all get home!"  She was reading my mind.

Alex, comforting a sputtering Coco and perhaps hoping NOT to be in trouble when we got home, called out cheerfully, "MJ, I bet she's not afraid to go underwater anymore!"  My reply was, "She's likely more afraid, Al.  You've probably set her fear of underwater back four years, which is hard to do because she's only three."

Turns out Al's right.  Coco now puts her face in the water no problem.  She smiles afterward.  She's not afraid of swim lessons with Daddy anymore. 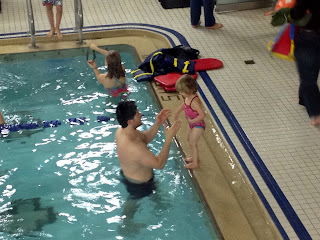