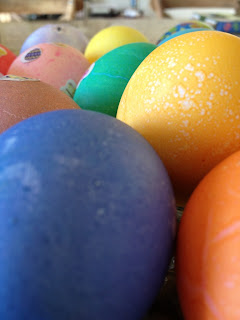 Perhaps I'm in over my head with this writing class.  I'm in there with "real" writers who have done a "publish."  My teacher's former job was literary critic for the Seattle P.I.  My writing assignments are returned with red marks all over them.  I'm pretty sure it's my teacher's pen, though I like to think he was just eating Twizzlers and got sloppy.

My assignment essays, strictly bound by a 300-word limit, have me awake in the middle of the night, writing in fits of sleepy inspiration.  I'm quite proud of my most recent essay and look forward to reading it aloud to a roomful of critics who will have no idea what I'm talking about. 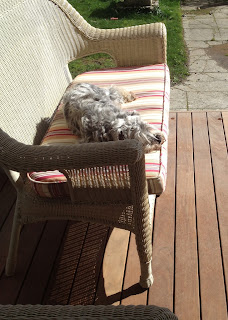 Spring has sprung in Seattle and not a moment too soon.  Winters in the Pacific Northwest, as most people know, are chilly gray and dreary.  But in the past week of warm sunny days, we've come out of hibernation.  Everyone's back outside, stretching and squinting up at the mysterious yellowish circle in the sky.

My favorite runner is back, running through our neighborhood for hours at a time.  He's my favorite because, while most runners look straight ahead and pound the hell out of the pavement, he gets more vertical with his strides and looks around the whole time.  It gives him the appearance of bouncing, near skipping, down the sidewalk.  He looks thrilled to be running, which is a strange concept to me.

The days when all the mountain ranges are out -- Olympics to the west and Cascades to the east -- and Mount Rainier is standing crisp and clear to the south, those are the days we Seattleites live for.  On those days, we are all convinced we live in the most beautiful place on Earth and feel smugly satisfied with our life choices. 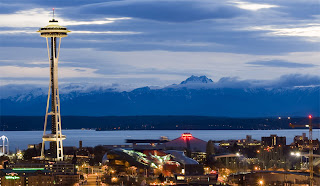 photo www.seattlecenter.org
We're now facing another string of cold gray days but last week was enough to give us all more patience.

Coco had a nightmare last night that woke her (and me) at 4:00 a.m.  She was bolt upright and crazy-eyed, screaming that something was in her bed. As I tried to calm her, she seemed to catch sight of something out of the corner of her eye.  Her eyes widened and she screamed again, then bolted to the end of her bed.

She convinced me.  I nearly yelled,  "Holy sh*t, girl, there IS something in your bed!" and hightailed it out of her room.  Instead I gathered my wits, pulled all her blankets off the bed, shook them out, and quickly became hopelessly entangled in the middle of them.  Lucien woke up and said sleepily, "Mommy, are you doing an April Fools joke?"

There was absolutely nothing in Coco's bed but don't bother trying to convince her of that, it's wasted breath and time.  She came back to bed with me where she spent the rest of the night kicking Alex and I in the kidneys. 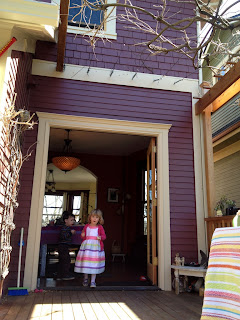 As usual, for those of us with no family nearby, friends were family for Easter.  We gathered on the Street of Dreams for an egg hunt and mimosas (one was for kids, one for adults, you decide).  The kids watched in horror as Seattle Mom and Dad's cat attacked and nearly killed a mouse in the backyard.  Seattle Dad had to put the mouse out of its misery because there was much suffering.  Happy Easter, kids, and no worries, maybe that mouse will resurrect just like Jesus. 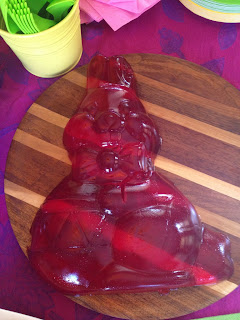 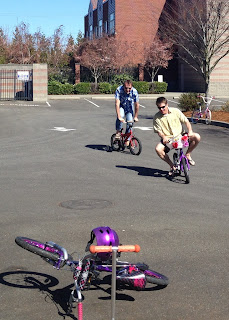 
When we got back to Seattle Mom and Dad's house, the jumping began -- 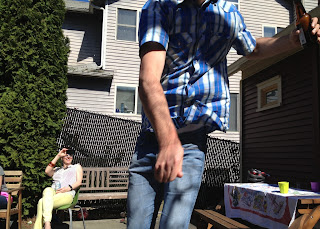 It's not Easter until someone jumps over my head, scares me and makes me spill my mimosa. 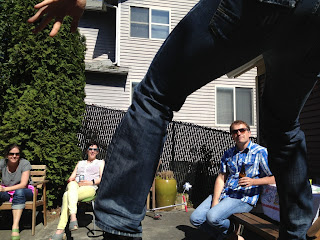 This one's for the ladies

There was some singing involved in our Easter celebration, which reminded me of a classic Alex tale.  When I first met him, Al loved Cat Stevens and sang his songs regularly and loudly.  His favorite song was "Peace Train."  But instead of understanding the chorus for what it was -- "Ride on the Peace Train" -- Alex misunderstood (it's hard to decipher foreign language song lyrics!) and sang, "I love to be straight."

I love my foreigner. 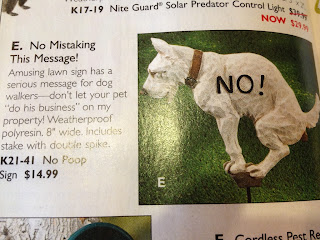 How is this better than a dog pooping in your yard?  Instead of an occasional left-behind pile of poo, you're going to stare at a fake dog in full poo position, with fake poo coming out of its behind, every time you step out your front door?  Catalog people, go home, you're drunk!

Everyone jump on the be straight,
MJ
Posted by MJ at 11:52 AM