The call of the Midwest 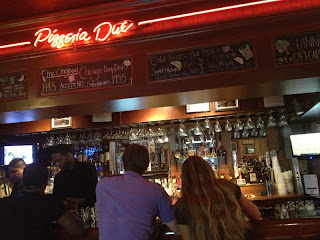 I'm back.  Some glorious strange sh*t went down the past couple of weeks.  It was wonderful.

Al and the kids left Seattle the same day I did.  We departed Sea-tac airport within twenty minutes of each other and just two gates apart.  We sat together until I walked away to board my plane.  That was a sickening moment.  My fear of flying is no secret but that day was worse than usual -- I not only had to worry about my plane but their plane, too.

I didn't sleep much the night before.  I found myself in the uncomfortable position of praying that if one plane had to go down, let it be mine.  I knew I was getting a raw deal in my hypothetical scenario but it was the only way.  My husband and kids could go on without me but the opposite is definitely not true.

My destination was Chicago, theirs was Quebec.  And as planes tend to do, all the planes stayed in the air with no troubles and we all made it to our destinations safely.  Alex was praised on his flight by his fellow passengers for doing such a good job occupying his children.  In reality it was I, the missing mama, who planned for weeks beforehand and strategically packed carry-ons with new sticker books, fully charged movie players, assorted shiny objects and hundreds of baggies full of delicious snacks.

Alex doesn't understand how thoughtfully I set him up for success.  He told me it wasn't hard to keep the kids occupied on the plane.  If we ever do it again, I'm going to pack the kids' bags with a couple old encyclopedias, several crowns of broccoli and some plastic baggies full of air.  Alex will learn things on that flight. 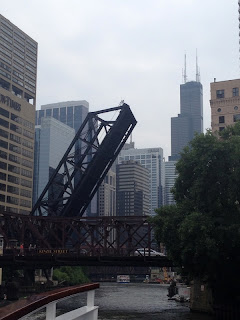 I rode the El into Chicago.  A smelly woman sat next to me.  She got up and left a few minutes later but her smell stuck around.  Then a nicely dressed man sat down next to me but immediately jumped back up looking nauseated and moved off down the aisle.  He thought the smelly woman's smell was my smell.  It was a lonely time.

Then I asked what the concern was with the ring.  If I wore it, would people sidle up and rip it off my finger?  Would they cut my finger off with a pocketknife and jump out a window?  Chicago O said no, but someone might see it, follow me off the bus and attack me in an alley later.  Then I was pretty terrified of Chicago.

But in reality the only thing to be afraid of in Chicago was Chicago O.  He nearly killed me with his fast walking and darting into traffic.  I lost him at every crosswalk because he dove into the crowd and started shouldering people hard as if they'd hurt his mama.  He wasn't slowed by my calls behind him, "But I'm from Seattle!  We're a peaceful people!"  He just continued to mutter about all the damn people on his sidewalk. 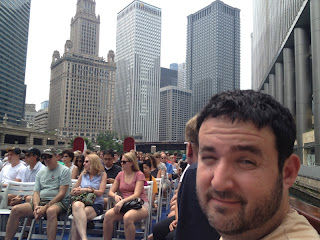 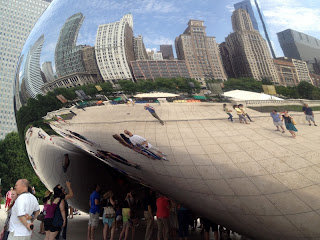 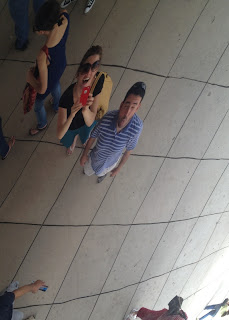 Chicago O really knows me.  On my first day, he sent me directly to the Driehaus museum.

The Driehaus is an immaculately restored 1879 mansion in downtown Chicago.  It was absolutely my thing.  I hope I didn't damage the gleaming woodwork with my saliva puddles. 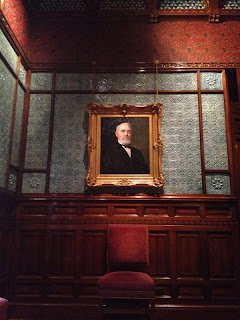 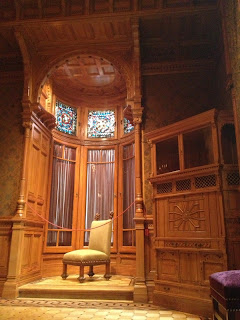 The sewing room.  You must be joking.

Chicago O left me alone for lunch because he and his dog have mutual separation anxiety issues.  One day he dropped me off at a well-known Chicago pizzeria and I overheard the couple seated next to me discussing how to minimize their caloric intake while eating Chicago style pizza.  They decided to avoid the crust.  I decided they were idiots. 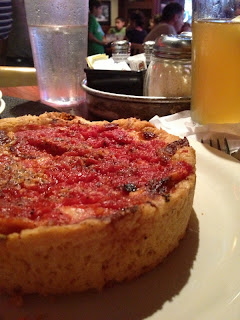 Don't think about calories when you eat Chicago style pizza.
Don't kill your own joy.


After a few days in wonderful glorious Chicago, I rented a car and drove to Columbus, Ohio.  There were other good people waiting for me there. 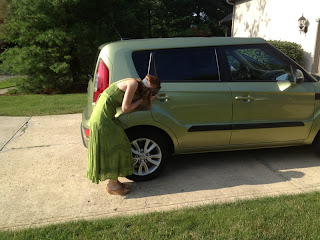 It was nice the rental car people gave me a car the same color as my dress so I could camouflage myself when I got spooked by the Midwest.

The drive to Columbus from Chicago was sweaty-palmed thanks to the epic thunderstorms I encountered throughout Indiana.  My windshield wipers were going as fast as they could but visibility was still about half an inch.  I would occasionally hydroplane in a large puddle spreading across the highway.  It wasn't looking good.

I called upon my dusty Midwestern instincts and did the one thing I remember doing in such circumstances in the past -- I found a large semi truck and rode its taillights to freedom.  I was only going 20 mph but at least I was still moving, unlike all those who panicked and pulled over to the side of the road to wait for the end of days. 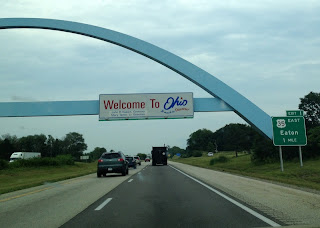 I made it.  Back in the home state after 12 years.

I rolled into Dublin, a suburb of Columbus, and into the arms of my best friend from high school, Ohio Mom.  She came to visit me in Seattle not too long ago, maybe you remember her.

The living is good in Dublin. 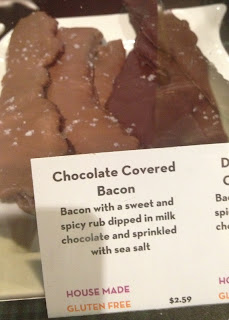 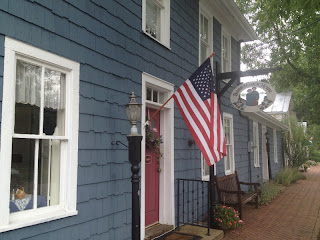 The reason for my visit to the Midwest was my 20th high school reunion in Toledo, Ohio.  It was the reason I was looking for to get back to my hometown.  My family's been gone from Toledo for 12 years so without the reunion, it's not likely I would have ever returned.

Ohio Mom and I researched who was coming to the reunion and grew concerned when we didn't recognize half the names.  The search then began for Ohio Mom's high school yearbooks.  We wanted to put faces to names before we arrived at the reunion in Toledo and blurted, "Who the hell are you?"

Ohio Mom and her husband dove into the dark recesses of their storage spaces.  Many dusty boxes were lugged up and down ladders but none of them contained yearbooks.  Most of them contained New Kids on the Block paraphernalia.

Right before I took this picture of Ohio Mom in the back of a surprisingly deep closet, she said, "Ya want a wedding dress?" and threw a petticoat over her shoulder.  Apparently lots of stuff in there. 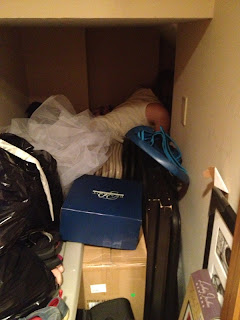 I left Ohio Mom climbing around in her closet and went to my college roommate's house in another Columbus suburb for dinner.  When I arrived, we shrieked loudly.  It had been 16 years since we last saw each other and she used to be blonde.

Roomie and I invented a game in our dorm room called Obnoball.  I would tell you about it but I don't think you can handle Obnoball.  Not yet.

We also killed a friend's fish once.  We think it was an accident but neither one of us really remembers the details.  We just remember she was pissed. 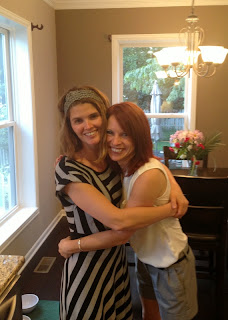 Roomie's still adorable, bubbly, wonderful, and she cracks me right up.
(And she can give an incredible summary of Tecumseh)


The day before the reunion, Ohio Mom and I drove up to Toledo, Ohio.  We never did find those yearbooks.

Meanwhile, the news here at Banister Abbey is the aquatic snails we inherited from Lucien's first grade classroom have mated.  Now instead of two big snails we have two big snails and forty tiny snails.  Screw everything. 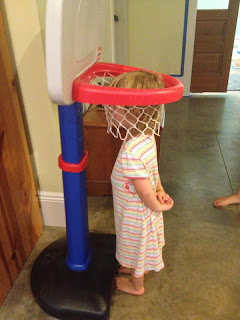 And Coco's turning into one goofy kid

And the exterior project has begun on the house.  It's really looking lovely, don't you think? -- 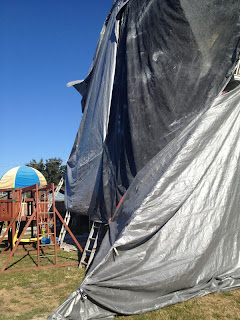 We are getting used to living in a house wrapped in plastic.  It's as dark and scary as you'd expect.