A man biked past our house this morning.  He was nude.  There was a sign hanging from his handlebars that said, "Hating your body is stupid."

I wish I had a picture of him.  Instead, please accept this picture of... something. 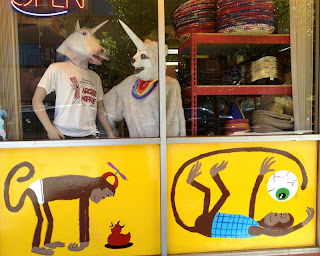 Happy Summer from Seattle everybody!  In our city, the mountains are out, the temps are rising and the people are getting naked.  Sweet wonderful weird Seattle.

I began the summer by stepping on a hoe in the garage while foraging for a paint can.  The handle came flying at me and cracked me right in the forehead.  I stood there flabbergasted for a minute, "Oh my God, that sh*t really happens?"

The first two weeks of summer break were devoted to the Loosh.  I handed Coco off every day so Lucien and I could roam the city without her short little legs holding us back.  It's rare for me to have one-on-one time with Lucien.  Coco's always with us or Alex is stealing him away to do "man stuff" which I can only assume involves burping and grunting and possibly hunting buffalo?

For just two weeks, I wanted Lucien to myself.  Because he's thinking all these random awesome thoughts and I'm missing them.  Because he's starting to figure out what sex is all about but is still totally confused by it.  Because he still automatically reaches out for my hand when we walk down the street and I will soak that sh*t up until the second he says "Mom knock it off I'm too old to hold your hand you're embarrassing me oh my god."

(At that moment, I will try to keep a stiff upper lip as my heart breaks quietly inside my chest.)

We covered a lot of ground in two weeks.  Here's a Lucien cell phone picture extravaganza.  I take a picture of him approximately every thirty seconds so comfort yourselves with the knowledge I left hundreds out.


The Fremont Troll under the bridge -- 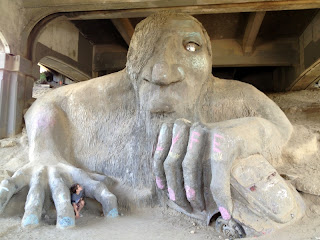 The Loosh in one hand, a Volkswagen in the other


Archie McPhees, where he was introduced to important things like Pop Rocks and Mad Libs and Jesus bobble heads -- 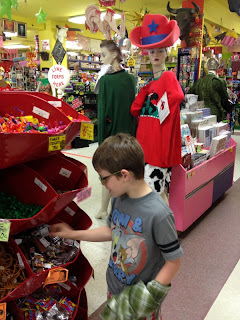 Gameworks, where he refused to acknowledge he was still too small for some things -- 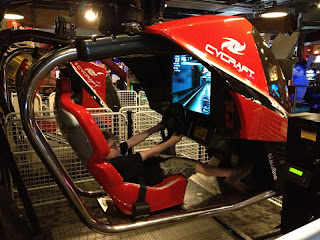 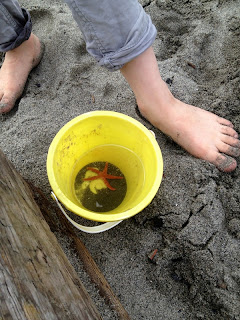 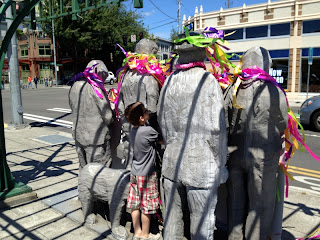 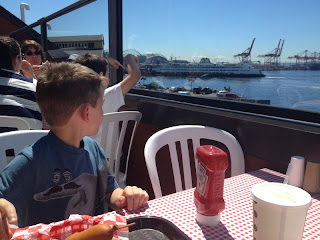 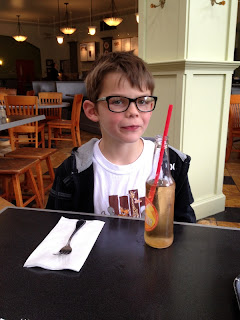 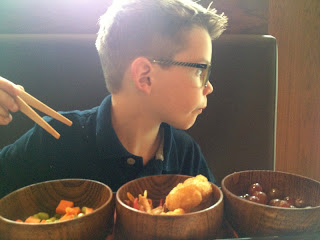 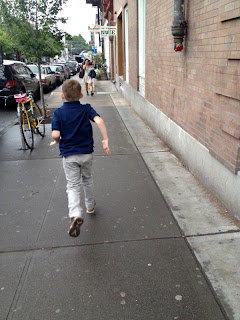 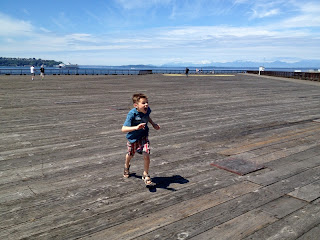 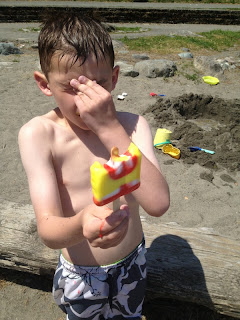 We also bought 36 pet crickets.  They were a reward for Lucien, who's really into bugs, for being a fantastic dental patient.  He had a cavity filled and didn't move a muscle.  That's harder for Lucien than most people.

We purchased the crickets at the pet store in the "reptile food" section.  Our crickets hit the jackpot.  They will not be fed to a snake; instead they will be free to live out their short, meaningless lives on our kitchen counter.

Having pet crickets is unexpectedly wonderful.  When they chirp, I feel like an eight-year-old on a summer night back in Ohio.  All that's missing are the mosquitoes the size of your fist that can drain your arm of blood in half a millisecond.  I don't miss those damn things. 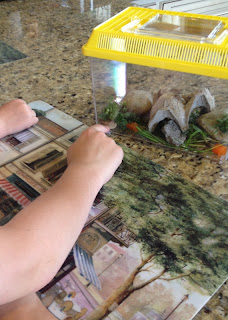 We also have two pet aquatic snails which were inherited from Lucien's first grade classroom at the end of the school year.  They are awful because they smell like death at all times.

But I still have to keep feeding them because it's the right thing to do. 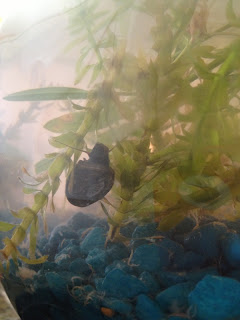 
Lucien and Alex recently planted some tomatoes and strawberries in the yard.  But Oscar keeps running over them while barking hysterically at dogs on the other side of the fence.  So Lucien is now protecting his plants with stakes and dinosaurs. 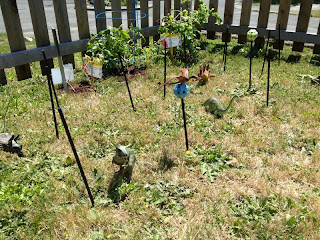 There's nothing left in the budget for weed removal

I'm feeling completely in love with my family today because I'm moments away from leaving on vacation without them.  There is both relief and anxiety.  I'm not going to reveal the reason for my trip right now but trust me, it's really going to be something.

Alex is taking the kids to Quebec during the same period of time.  Please wish Al good luck with the two kids on the two flights that take all day.  Poor brave Al.  Oscar and the snails and the crickets will be cared for by our housesitters and neighbors.  That should cover everybody. (?)

Happy 4th of July tomorrow.  Let's go fire up the grill and eat some meat.

See you on the flipside,
Happy Summer!
MJ 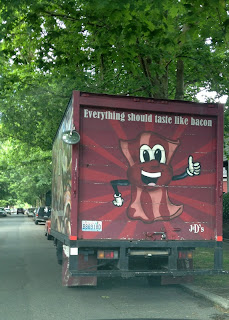