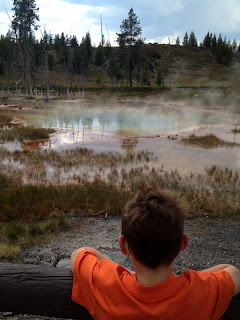 I've been absent from the blog for a long time because I road-tripped with the kids to Colorado -- but only after I took Lucien to the emergency room where he was evaluated for bacterial meningitis.

It was determined Lucien did not have bacterial meningitis after five hours of testing in a small windowless room with stickers on the door that said cryptic things like, "If ye wear not a mask in this room, death be most certainly upon you."

I got so hungry in that room I kept sliding out of my chair to the floor but it wasn't possible to leave my scared boy alone to go find a vending machine.  My hands started to look meaty and delicious.

Lucien, thankfully, did not need a spinal tap to rule out bacterial meningitis.  Each time "spinal tap" was mentioned by the doctor, I had two very conflicting reactions -- my heart seized in fear for Lucien as I resisted the urge to yell  "IT GOES TO 11!  LICK MY LOVE PUMP!"

At the very moment Lucien was deemed fit for release, there was a ruckus in the hallway.  A nurse popped her head into our room and said, "Please stay in this room for your own safety!" and slammed the door shut again.  She said it so cheerfully I briefly thought it was a pleasurable thing to be shut back into our tiny windowless room.

We then heard what sounded like a wildcat out in the hallway.  More accurately, a wildcat who knew four-letter words wrestling wildebeests with authoritative voices.

I texted my nurse friend and asked, "What does 'Code Gray' mean? I'm hearing it repeatedly over the intercom."  She responded, "That's a behavior code, it means someone's going nuts and they're calling for a show of force from the staff."  I thought, "Hell, I'll get out there and wrestle that motherf*cker to the ground myself if it means we can leave."

When it was finally safe to exit our room, we walked quickly through a group of policemen who were somberly discussing "meth-induced psychosis" with the emergency room staff.

The incident gave Lucien and I context for our first "drugs are bad" conversation.  It happened as I was carrying him like a baby out to the car, both of us covered in dried vomit, but it was a start.

A few days later, The Loosh was feeling much better so I packed the car for our road trip to Colorado. Most people think I'm nuts to drive 20 hours alone with the kids but it was a great trip, the kids were awesome and we had a lot of fun talking about wind farms, hay bales and cow poop.

The trip went so well thanks in part to the "surprise bags" I tossed over my shoulder into the backseat every two hours (thanks for the idea, Ohio Mom, I love you). They were filled with crap I bought in the $1 section at Target.  If I handed my kids bags containing Post-its, puffy stickers and a couple markers at any other time in their lives, they would look at me like, "What the hell are you doing, Mom?"

But in the back of a car, it was miraculously like winning the lottery every damn time. 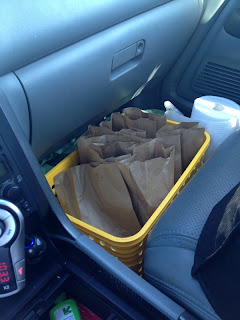 You're the best, surprise bags

We spent the first night of our road trip in a hotel in Utah where I split the kids into separate beds and then had to decide with whom to bunk.  I chose Coco.  It seemed logical given her size but I didn't realize one insurmountable problem -- Coco is a spooner.  If you turn away from her and try to sleep, she will soon be pressed up against your back.  Then her skinny little arm will appear over your shoulder and snake up and around your head.

My muffled voice could be heard for much of the night, "Coco, I need some space please" but she just squeezed harder.  I would have fared better with Lucien, the restless-legged horizontal sleeper.  Kicks to the kidneys would have been more restful than My Little Shadow.

Driving through the western United States is one of the greatest things you can do.  There are many times you're the only car on the road and actual pieces of tumbleweed are blowing across the highway. 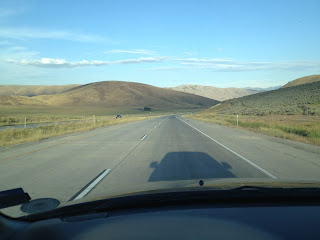 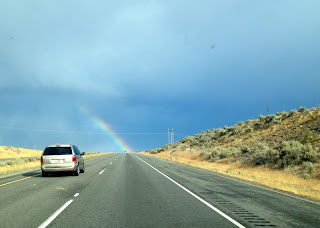 Western road trips are so magical, rainbows end in the middle of the roads


A lot happened during our visit to Colorado.  It's impossible to address it all.   I'm going to do some greatest hits bullet points, throw in some pictures, and then I promise my summer vacation tales are over. 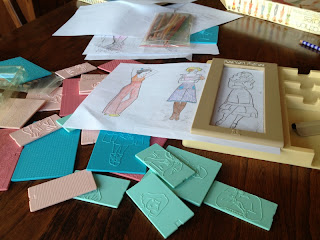 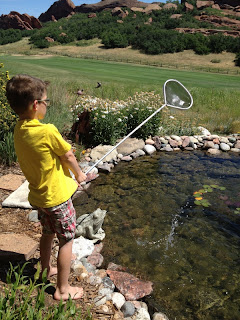 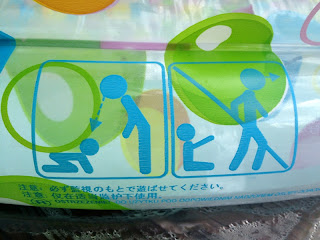 1) Balance a large ball on your baby's back while you shoot arrows out of your eyeballs at your baby's head.
2) Do not walk away from your baby to throw a javelin. 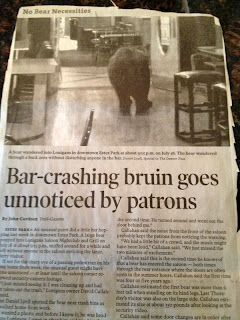 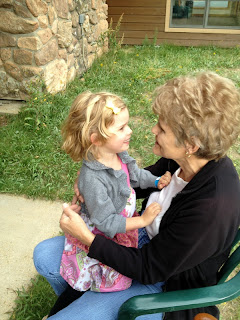 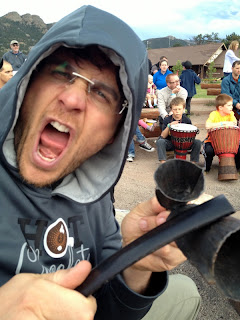 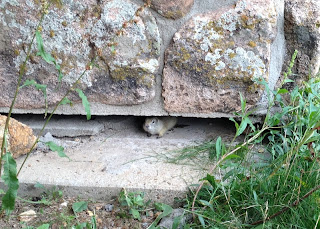 I'll see you in your nightmares, French Canadian. 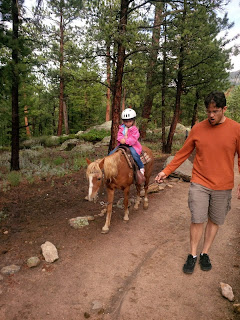 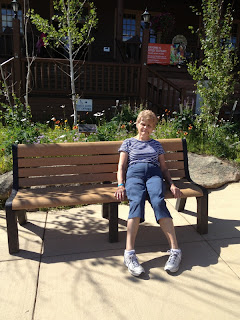 This is a reenactment.  We felt better by this time.
It's also a strange angle that makes Mom look like she has a tiny head and a giant-like lower body. 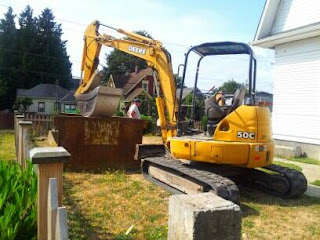 The short answer is we unexpectedly had to replace our sewer line in the middle of our exterior project.  It's a long story and no, I don't want to talk about it.


Back to the Rocky Mountains. 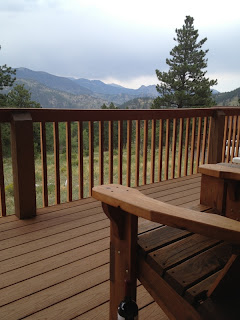 The children were not allowed to wander too far off the porch lest they be devoured by a mountain lion. 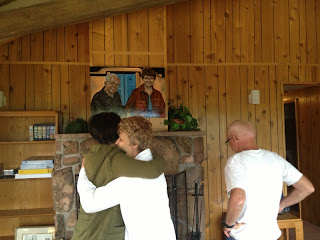 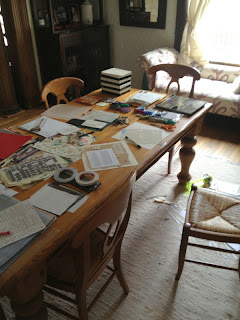 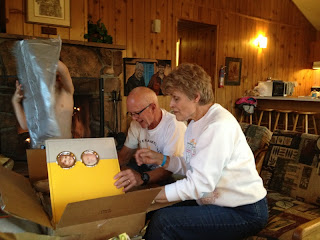 It was worth it when they realized what it was 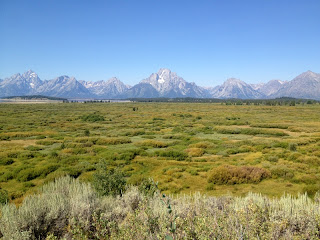 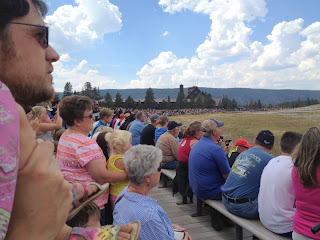 Old Faithful still draws a crowd.
But the crowd wanders away before Old Faithful is finished doing its thing.
We have short attention spans in this country. 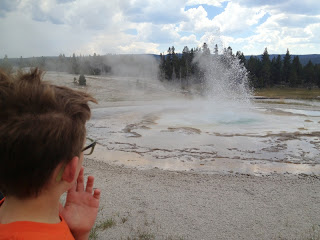 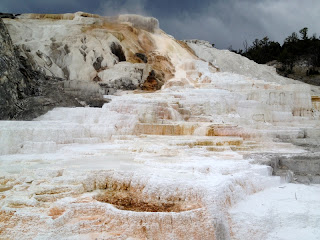 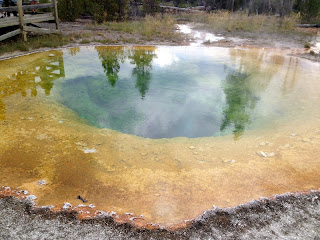 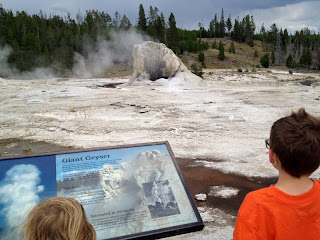 See you next year, incredible Yellowstone. 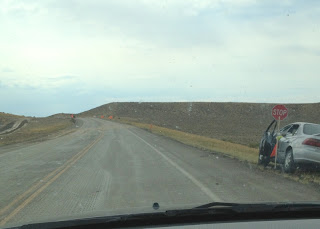 (the answer is apparently yes, judging by the sudden hysterically waving arms)