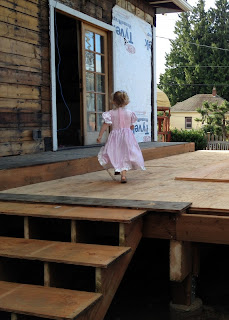 Our house is under a lot of stress these days.  There is literal stress, as in the exterior of the house is being ripped apart by a friendly team of men climbing scaffolding and swinging from ropes.  They're currently rebuilding a couple balconies, replacing millwork, building a deck, and making a general mess of our yard.

At first it was jarring to turn around and see their faces on the other side of our second-floor windows but I've gotten used to it.  I may never shower again, though.

There is also a less tangible kind of stress in the form of Alex's current workload, which has never been heavier, and Lucien's struggles.  We had Lucien tested over the summer because he was having a painfully hard time reading.  The results came back a lovely potpourri of conditions, some of which were completely foreign to me.  That's my Lucien, all right -- something most people have never even heard of, let alone experienced.

We are now deciding whether to move him to a private school.  Their tiny class sizes and non-traditional teaching methods are tempting.  In private school, students learn math by rolling around on the floor with puppies and spelling is taught in outer space because gravity puts too much pressure on the brain.  C'est incroyable!

We will make the hard decision, and make it soon.  I'm stressed but have realized that, should we choose "incorrectly," we are not necessarily sending Lucien down a path full of fleabag motels and prison.  Though it's certainly a possibility.

Parenting is mind-boggling.  You never think you're going to find yourself in a place until you suddenly find yourself in that place and then you find yourself saying things and making decisions you said you'd never say or make. Raising children is really like playing one big fat joke on ourselves. 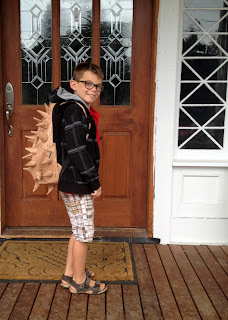 But you really really love the jokes and would do anything in your power
to give the jokes their best shot.

We now have a pet praying mantis, scooped up by Lucien in Eastern Washington on the way home from our recent road trip to Colorado.

I lectured Lucien all the way home:  if we take the praying mantis out of hot, arid Eastern Washington and take him to opposite-of-all-those-things Seattle, we had a responsibility to take very good care of him.  We had to keep him indoors and catch insects for him every couple days to ensure he's well fed.  I was super serious about it and I'm not sure why.  There was just something about that adorable little mantis face that won me over  -- 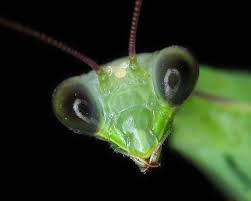 Lucien's interest waned once "Mantisy" came home but I still cared way too much.  I wanted Mantisy to be happy in our home, wanted him to believe being scooped up and removed from his family was the best thing that ever happened to him.  And that is how I came to be chasing a small spider around my bathroom with a Dixie cup at 7:00 a.m. this morning with a toothbrush hanging out of my mouth.

But he's still alive a month later!  My mantis baby!

Coco's in a different preschool now.  She apparently graduated from "pre-preschool" to just plain "preschool."  What the hell does that mean?  Have we all gone mad?

Preschool is out of control.  It began with the application paperwork, innocuous enough in the beginning with questions like "child's name" and "child's age" but quickly spinning into crazy town with "does your child need hugs during his/her school day?" and "In 14 years, what do you want your child to remember about this year?"

My answer to that last one was, "frankly, she's not even going to remember your names in 14 years so don't knock yourselves out, really." and summarized with, "Look, just keep her alive for 4 hours so I can get some sh*t done.  That's what preschool is for, thanks."

I was OK with gathering the school supply list with the standard boxes of Kleenex and whatnot but was confounded by the emergency preparedness kit.  Coco needed, among two dozen other things, an emergency blanket (which, once I got in my hands, appeared to be a large piece of tin foil), a "cozy toy" and my favorite -- a "comfort letter" to be read in times of national crisis or other assorted emergency.

The preschool provided a sample comfort letter to inspire us, which was very helpful except once I'd read it, I couldn't think of any other way to write it.  I ended up re-writing the sample letter but I used "Dear Coco" instead of "Dear Blank" and drew a bunch of hearts all over it to make it more personal.

It's probably better than what I really wanted to write --

If you're reading this letter right now, first up congrats on suddenly knowing how to read and second, it means something's gone terribly wrong and we'll likely never see each other again.  I'm sorry you're wrapped in a piece of tin foil right now.  Aren't you glad you have your "cozy toy" with you?  Don't get too attached to it, though, because if food supplies dwindle, you'll have to eat it.  You've been a great daughter, honey, and it's been a helluva ride.  YEEEE HAWWWWW!

Before all this back to school nonsense, we joined a group of friends for one last summer hurrah, a weekend camping trip on an island north of Seattle called Guemes.  It was beautiful, serene, peaceful.  It was also, as a friend described it, "a freaky tent-city wife-swap scenario." 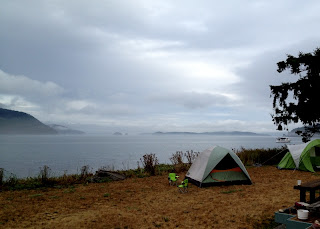 I assure you no wives were swapped.
I cannot make that same promise, however, about the husbands.

To get to Guemes, you must take a five-minute car ferry from Anacortes.  It is quite painful when you miss the ferry by two measly minutes, like we did.  You must then stare at your destination longingly for the next hour and mutter about how it would be faster to just swim there than wait for the next ferry. 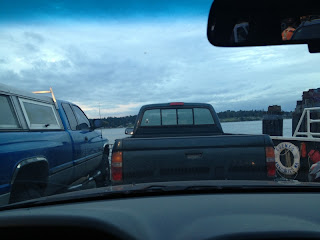 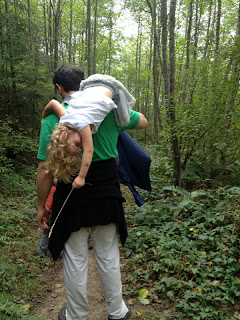 Crabbing was a big activity for the weekend.  It produced quotes such as, "Man, I would give anything for a crab sexing chart right now." 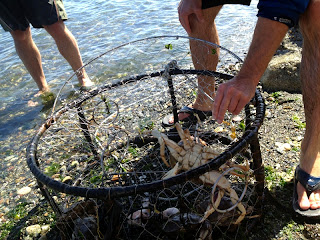 A couple of the dads hopped into kayaks one evening after dinner to check on the crab traps.  They assured us they would bring home a late night snack and lucky for all of us, they didn't lie.

When they returned quite late carrying some very unhappy creatures (who were then unceremoniously dumped into a pot of boiling water on the beach), one dad thumped his chest and grunted, "Men go out to sea.  Men bring food."

To which we replied, "Men inexplicably gone half the night. When men return, men give us crabs." 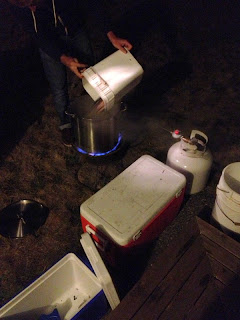 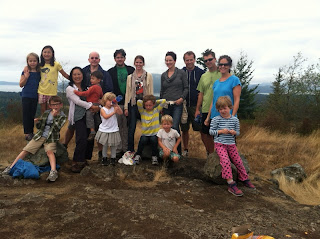 It was a fine, funny crew

You know what I learned recently?  I'm happier when I don't read or watch the news.  I can be having the best day of my life but then I innocently read a little news online and BAM.... time to hide in the closet, drag the kids and Al and the dog and the praying mantis in with me, and cover ourselves in tin foil safety blankets until the apocalypse.

That is why this blog will continue to be a news free, fluffy frivolity zone. 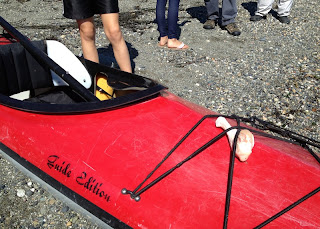 Like this raw chicken leg strapped to a kayak.

Email ThisBlogThis!Share to TwitterShare to FacebookShare to Pinterest
Labels: Banister Abbey, camping, friends, Guemes, preschool, renovation hell, Se, strange pets, stressed out man, The Loosh, to private school or not to private school that is the question