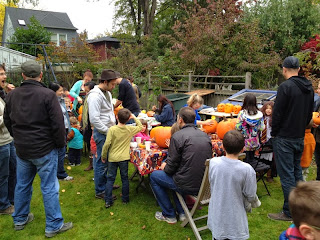 If you're a parent of a school-aged child, you know the joys of curriculum night.  Curriculum night is when you go to your kid's school in the evening and squeeze into tiny chairs underneath trapezoids and parallelograms dangling from the ceiling by strings.  Then the teachers tell you all the ways they're going to force learning into your kid's brain.

I appreciate the teachers at our school but sometimes they offer unsolicited advice.  At curriculum night they told us, "9:00 p.m. is too late a bedtime for a second grader."  My impulse was to raise my hand and ask,  "What if I put my second grader to bed at the respectable hour of 8:00 but he's still awake in his bed at 9:00?  Should I then club him over the head like a baby seal to get him his much needed rest?"

In a newsletter sent home last month the teachers asked parents to make sure girls wear tights or shorts underneath their skirts because glimpses of underwear were distracting the boys and "it's never too early to teach our girls a little modesty."  Finally, an answer to the nagging question "at what age do we start teaching girls they're responsible for boys' behavior?"  The answer is seven-ish!

Ugh ugh ugggghhhhh.  Hey Lucien, if you catch a glimpse of a girl's underwear, it's probably embarrassing for her so don't make a big deal about it and get your eyes back on your work where they belong.  Personal responsibility and being respectful of others -- internalize it. 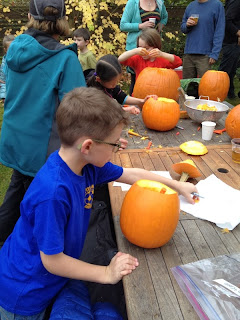 So how many 911 calls have you made in the past 18 months?  I've made four.  One was the suspected bomb around the 4th of July last year.  One was the angry guy walking down the middle of our street yelling and throwing rocks.  One was the person who plowed over our traffic island in the middle of the night and knocked down the tree which had been lovingly planted there by our green thumb neighbor.

The fire department came and chopped down the tree because it was bent over and lying in the middle of the road.  They chucked it onto the front lawn of Banister Abbey where I found my sad neighbor standing over it the next morning.  He asked if I cut it down and I was slightly offended.  I admit it didn't look good, tree being in my yard and all, but why would I cut down a tree in the middle of the night?  I'm a very important room mother with numerous mysterious responsibilities.  I must get my rest.

(This just in -- as room mother I was recently asked to purchase several pumpkins with which to decorate the preschool classroom.  I accomplished my mission and stand at the ready awaiting further instructions.)

My fourth 911 call was this past weekend.  I looked out my window around midnight while brushing my teeth and saw three young men trying to take down our street sign.  They threw rocks at it and climbed on each others backs trying to get at it.  When they began taking blocks from our retaining wall and stacking them at the base of the pole,  I said "OK THAT'S QUITE ENOUGH, A**HOLES."  I called my friends at 911, "Yo, it's MJ again."

Our city neighborhood is a hotbed of strange activity at all times.  We've had friends who live in more suburban neighborhoods ask, "Do you feel SAFE in this neighborhood?"  I would be sleeping with one eye open tonight if I was a street sign but other than that, yeah, I feel OK.

Maybe their question is as surprising to us as ours is to them when we go visit their neighborhood -- "What the hell do you guys DO out here?"  Here in the C.D. we watch dozens of people walk past daily and say "hi."  We walk a handful of minutes to restaurants, bars, theaters, and live music venues.  We stare at a city skyline from up close.  And yes, we call 911 when someone's acting the fool.

Speaking of criminals, this is me getting fingerprinted -- 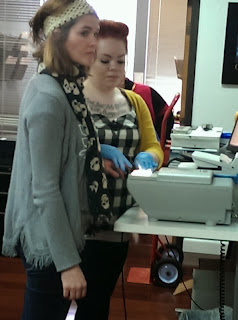 I wish I could just leave it there, leave you wondering and guessing why this is happening.
Hey wait, I can!  It's so fun to have a blog.

Al and I attended another charity auction over the weekend.  This is the 1,276,588nd auction we've attended since returning from France.

Our table at the auction was a rowdy one.  We badgered each other into buying things none of us wanted or needed.  They pressured Al and I into bidding on 12 pounds of fresh seafood ("just think of the party you can have!").  Yes, that's true!  So we kept bidding until we won it.  Yee-haw, fish party!

Now that sounds like a really terrible party.  I hate auctions.

The auction was held to benefit L'Arche, an organization I've mentioned before.  It was the place where Alex and I met, the very place where we banded together to fight street crime side-by-side for the next 15 years.

I won a painting in the silent auction. It was painted by Carol, a woman I used to live with in the Seattle L'Arche community.  She was 52 years old with Down Syndrome and barely verbal.  We were friends and loved each other very much.  I shared more belly laughs with her than I've shared with just about anyone.  We also got mad at each other sometimes.  She hit me hard in the arm once while visiting the zoo.  Carol, you were so stubborn.

My grandma died while I was living in L'Arche.  After I heard the news from my parents over the phone and came downstairs, Carol saw the look on my face before I said a word to anyone.  She squinted at me for a second, then rushed to me and wrapped me in a bear hug.  I cried into her shirt as she stroked my hair and said, "Oh Bustabee.....Bustabee...."  (Carol called everyone she loved "Bustabee")  She saw me through that grief unlike anyone else could. 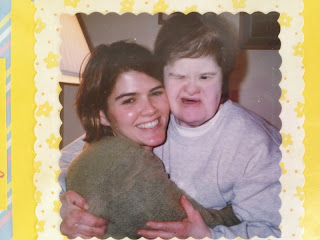 Carol passed away while we were living in Paris.  I tried to write something for her memorial service but couldn't adequately articulate the importance of her well enough to send anything good.  I deeply regret it.

I'm so happy to have a piece of her -- her fun-loving self, her contagious laugh, her enthusiasm for life, her sweet soul -- now hanging in the Abbey. 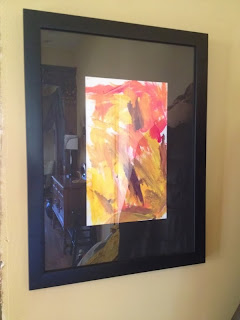 So maybe I don't hate auctions.

We're busily preparing for our 2nd annual Halloween party.  This year I've added a giant glow-in-the-dark spiderweb and a blacklight to the decorations.  Should be fun when people get drunk, become hopelessly entangled, and fall down.