She moves things with her mind

Seattle is an excited city right now.  Once again our Seahawks seem likely contenders for the Super Bowl and the whole town's gone rabid.  I'll readily admit I'm not much of a football fan but it's impossible not to get caught up in the excitement.  When even the bagger at the grocery store packs my groceries with a fist pump and a GO HAWKS, I high-five him and leave the store thinking it's fun to have everyone in the city on the same page about something. 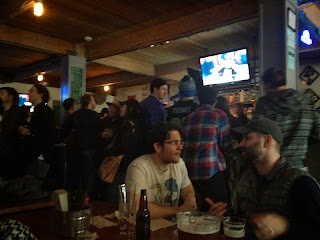 We got a sitter and spent Saturday at a local sports bar with some diehard football fan friends.  Fanatical fans are the best friends with whom to watch football because their enthusiasm and passion are both amusing and contagious.  A couple hours with them and I find myself yelling, "Suck it, ref, you #@&*% m*th#rf#@!" and feeling positively giddy about it.

The Seahawks won which is good because my friends are scary when we lose.  I would have balled up and rolled out the door to avoid interacting with them. 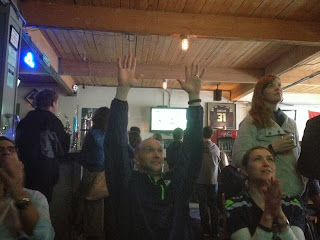 We went to a friend's house for dinner Friday night.  After dinner, our children invited us to what most parents dread at such neighborhood dinner events -- "a show."

I have two rules about shows performed by my kids: 1) the show has to be well rehearsed beforehand and 2) it has to have a story with a beginning, middle and end.  It may seem harsh to impose these criteria upon our young children but life is too short to sit through yet another hour-long skit with kids pushing each other, saying "you go first" and giggling nervously. There's just no entertainment value there.

Our kids generally obey my skit rules and as a result we've seen some fairly decent productions at our get-togethers.  This time, however, things went off the rails. 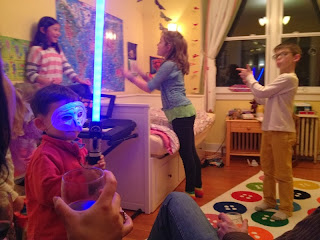 Alex stepped in to save what was left of the skit portion of our evening.  He performed a piece he wrote himself entitled, "How To Write An Awesome Resume."  Our friend's daughter accompanied him on her synthesizer and the kids danced.  It wasn't just good exercise; they received valuable life advice that will hopefully land them their first jobs someday. 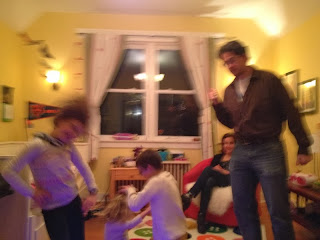 The most recent project I'm tackling at home is the kids' room.  I wanted the kids involved in the creative process so I spread out a million paint chips on the dining table and told them each to choose a color to paint their side of the room.  They pounced on the pile, held up their chosen paint chips with big smiles and then I thought "Oh no, I've made a terrible mistake."

Their chosen colors were electric blue and a pukey yellowish-green. Not only have my children proven to have zero knowledge of the color wheel, but also that they unable to work together to make something not hideous.

I don't have a choice in the matter now, I have only one option  -- I'm going to buy completely different colors and tell the kids colors look way different on the walls than they do on paint chips.

I made another mistake in my design of the children's room in that I went to IKEA by myself to buy bookshelves.  Some of those IKEA furniture boxes weigh seven times my body weight but I forgot about that until I found myself face-to-face with the IKEA self-service warehouse.

The self-service warehouse is an area usually swarming with employees in blue shirts but this time I found myself alone in a sea of cardboard boxes that could crush me if I made any careless moves.  I was eventually able to slide all necessary boxes of the IKTHORP LANKAS BOMKE or whatever it's called bookshelf (only in IKEA does one dot one's "a"s) onto my flat cart.  Halfway through I had to partially undress in the aisle because sweat had seeped through my favorite Anthropologie cowlneck.

Getting the boxes into the car was another matter.  I called upon my catapult and lever knowledge and finally, after using pivot points and the weight of the box against itself like a ninja, I flipped it end over end until it miraculously landed in the back of my car.

Alex helped me unload the boxes back at home.  As we wrestled the fiberboard beast into the house, Alex asked, "How the hell did you do this by yourself??" to which I replied, "my will is strong" and he said, "I swear you move things with your mind."