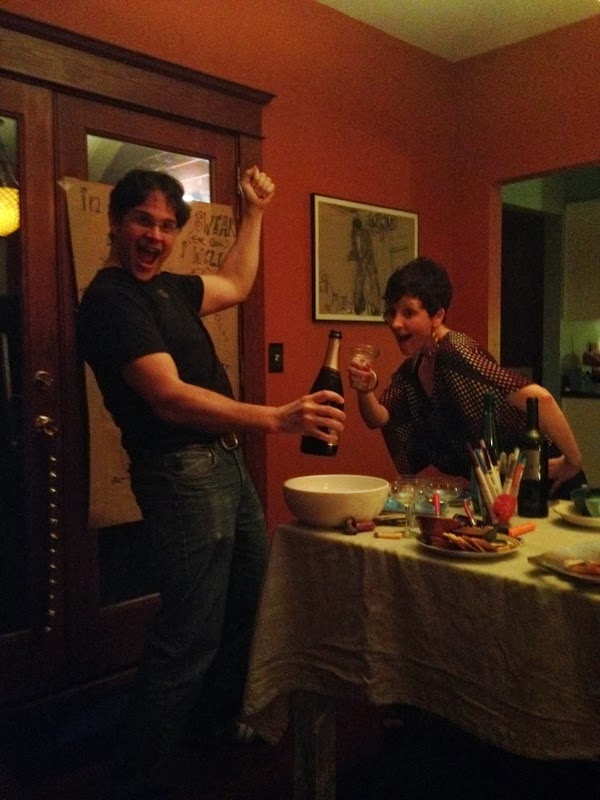 Happy 2014!  Hope you all had good mornings at the gym and you haven't yelled at your kids in 48 hours and your diets are thus far looking very promising.

My parents and brother came to Seattle for Christmas this year. The weather was cold and gray during their visit, the neighborhood fireworks on New Years Eve kept them awake much of the night, and all of them caught colds thanks to my germ-ridden kids.  They may never return.

The arrival of my parents and brother was a surprise for Lucien and Coco. I spent the weeks before Christmas moping around the house, sighing and lamenting the fact I wouldn't see my parents for the holidays this year.  I thought laying it on thick beforehand would heighten the joy when the kids saw Grandma, Grandpa and Uncle Bala standing on the front porch Christmas morning.  I stopped my charade when Lucien began rolling his eyes and yelling in frustration, "Geez, Mom, just invite them next time!!"

Mom, Dad and Bala appeared on our doorstep that morning wearing Santa hats.  The kids opened the door and bam! -- fistfuls of fake snow thrown in their faces.

The situation didn't compute for the kids even after they realized who was behind the snow assault. They were dumbfounded and seemed slightly perturbed we'd gotten the best of them. 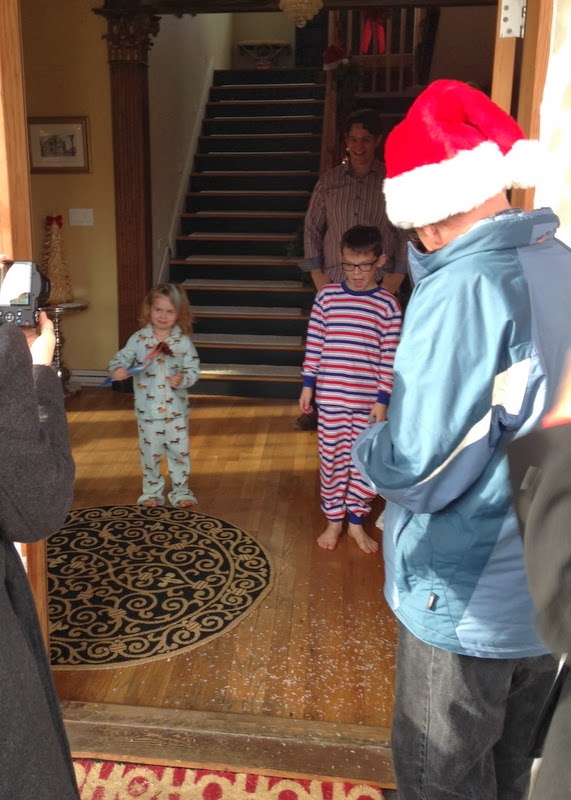 Much transpired this holiday season.  For one thing, I discovered a man camped in the Honey Bucket in our driveway.  I'm not sure what life circumstances led that man to possibly spend the night in our construction crew's port-a-potty but I think we can assume they aren't good.

The time for sympathy came later.  But in that moment, he freaked me right the hell out.  I heard a rustling sound inside the Honey Bucket when I took out the recycling that morning.  After jumping a mile straight up in the air, I picked up a stick and poked the Honey Bucket.  I didn't necessarily think the stick would help me in any confrontation situation, I just felt strongly about not touching the Honey Bucket with my hand.

I yelled something like, "Is there somebody in the Honey Bucket?" Nobody answered but the rustling stopped.  Emboldened by the fact no one had yet jumped out to fight me, I yelled in a deeper voice, with much bravado, "You gotta go now, person in the Honey Bucket over there" and ran back inside to watch from the safety of a window.  The man eventually left and we are now locking the Honey Bucket when the crew isn't working on the house.

This was my first year hosting my entire family for Christmas so much of December was spent making lists and calculating how many days in advance I could make food items without serving everyone old and moldy food.  My personality demands I get as much out of the way as possible so I don't lose my sh*t on the actual holiday.  That's why I'm grateful for the miraculous yet terrifying properties of corn syrup -- it allows me to bake the pecan pie a worrisome number of days/weeks/months/years in advance.

The Christmas meal went quite well except I overcooked the Brussels sprouts.  I also threw the carrots in the garbage when no one was looking because they cooked down to an embarrassingly small portion.  I knew laughter would erupt and fingers would point if I placed what appeared to be one carrot in the center of the table and told everyone to share it. 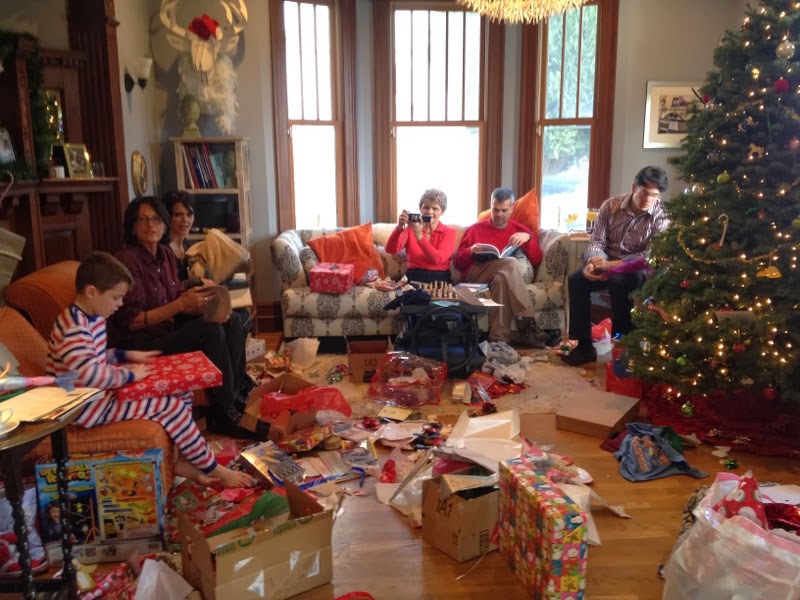 My sister recently married her girlfriend, Z, at the Shotgun Wedding Chapel in the Pioneer Square neighborhood of Seattle.  There were costumes involved.  I wasn't invited to the wedding but it's not because Raba and Z don't like me.  It's because it was supposed to be a secret, a way to quickly make the thing legal for insurance and tax purposes, months before the party we're having for the happy event next summer.

It turns out Raba and Z can't keep secrets very well so we all found out about it right away and then we saw the pictures and were like, "Raba, why are you dressed like a saloon girl and sitting on top of a piano?"

Anyway, we all feel immense joy for the two of them.  Z has integrated flawlessly well into our family.  She's kind and warm and helpful and thoughtful.  She also tends to sit back and be cool when the rest of us begin talking loudly and incessantly over the top of each other.  Lord knows we've needed one of her kind in this family a long, long time. 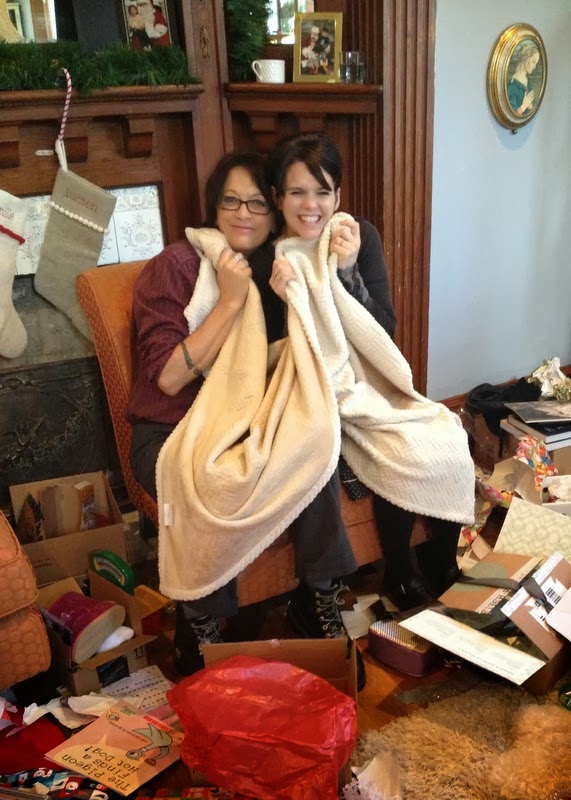 As a sign of welcome, our tribe presented the newcomer a fuzzy blanket.

I bought Raba and Z some "Happy Wife, Happy Life" dish towels for Christmas.  That adage must be harder to live by when there are two wives involved.  They may have to draw straws to decide who gets to be the happy one on any given day.  My Al has never fully embraced the wisdom of "Happy Wife, Happy Life."  When I mention it, he says, "Why?" and I'm like, "WHY DO YOU HAVE TO QUESTION EVERYTHING?"

I love having my parents around.  I wish they would move to Seattle but they hate Seattle weather so it's not likely unless I can convince them "gray" equals "happy." 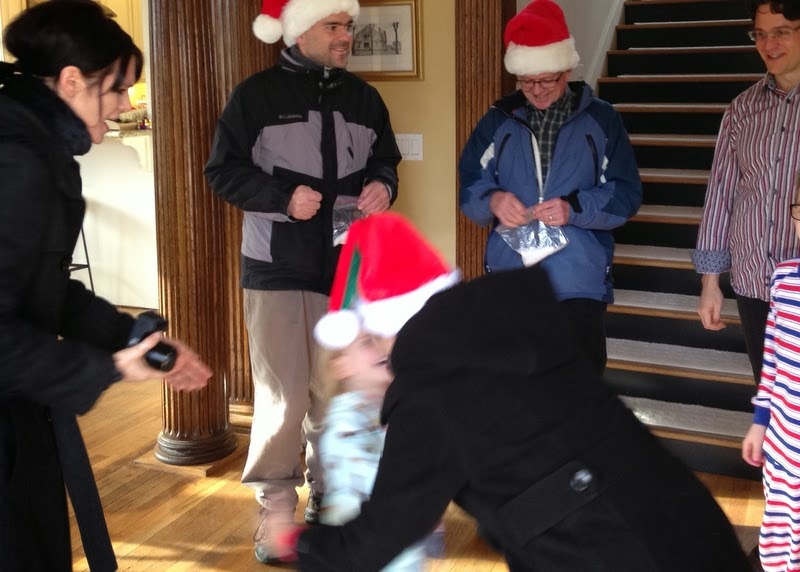 Coco adores them all 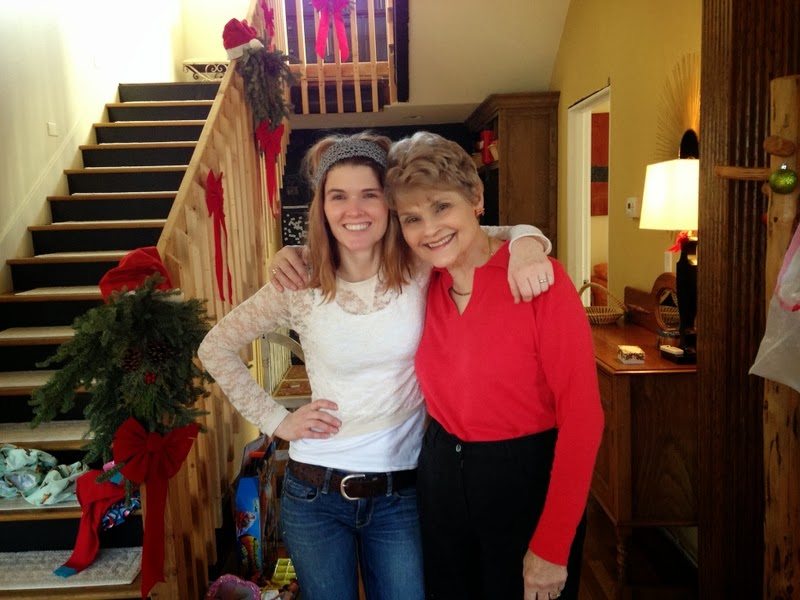 Me and my beautiful mama 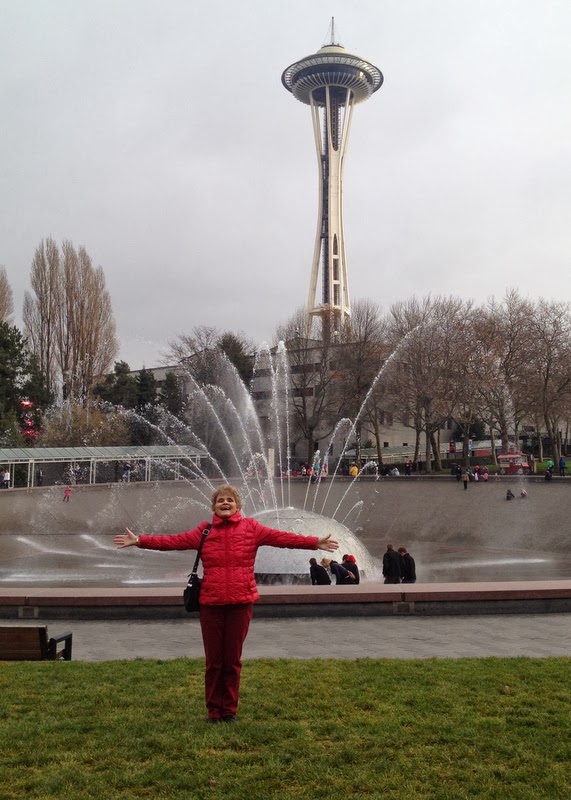 Mom is very enthusiastic about the Space Needle

Our beloved pet praying mantis, Mantisy, died a few days after Christmas. We knew the end was approaching weeks ago because she began moving very slowly and sometimes fell over for no reason. We felt a little better when Alex pointed out we should feel good about ourselves because very few praying mantises get to die of old age, but were still desperately sad each time she flailed in vain trying to catch her food or stumbled over her own gangly insect legs.

I was late picking Coco up from preschool one day because I thought Mantisy was dying at that very moment and I wanted her to hear my voice and know she wasn't alone.  I explained to the teacher I was late because I was accompanying a praying mantis into death.  The whole incident likely earned Coco an asterisk next to her name on the class roster.

The day Mantisy finally collapsed and didn't get back up, we all felt shockingly sad about it. 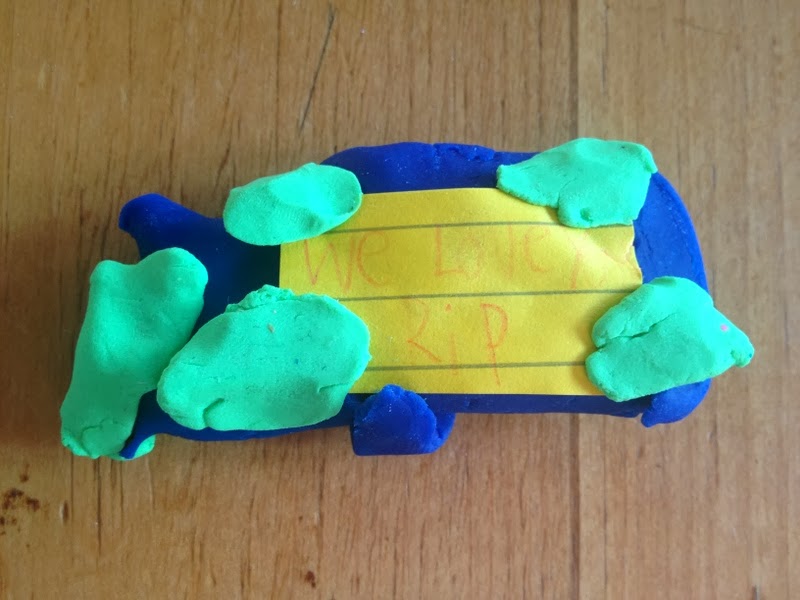 Lucien made a coffin for her out of Play-doh


So now it's 2014 and life goes on.  My parents and brother have returned to their Colorado blue skies and well-rested schedules.  Al, the kids and I began 2014 by burning Christmas trees with our friends on Alki Beach. 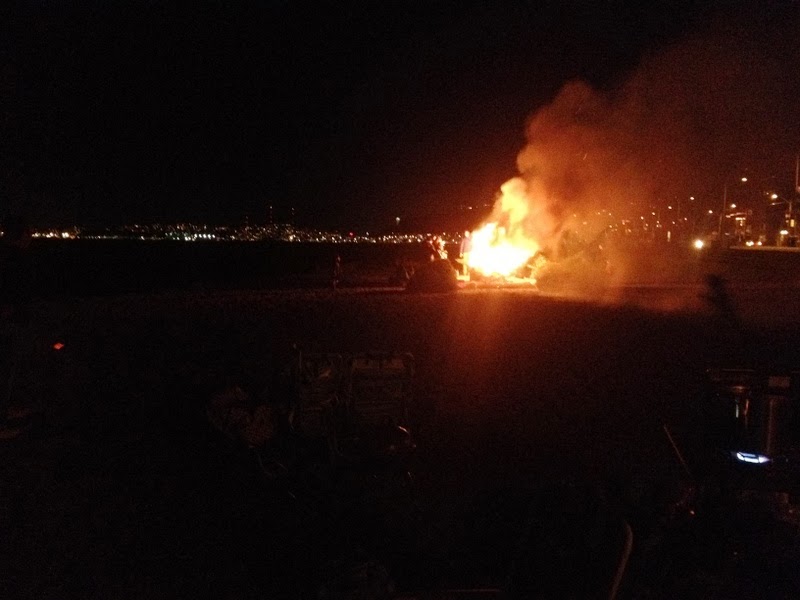 We were not the only group on the beach with the idea.  Several members of the group next to us stripped down to sequined hot pants and dove into frigid Puget Sound.  When they emerged from the water, they stood on the beach naked and guzzled whiskey.  They certainly gave us some good ideas for next year. 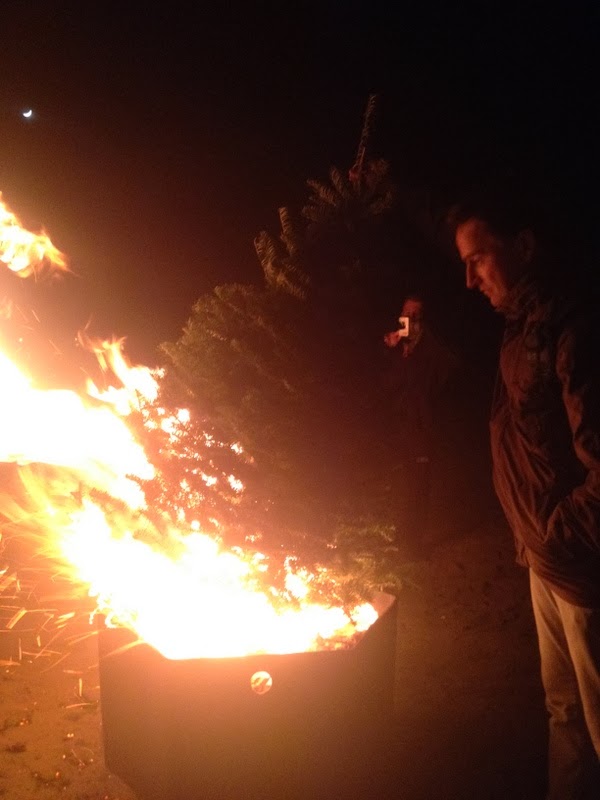