I was sitting on the floor sorting laundry yesterday afternoon when I heard a small rustling sound behind me.  I turned quickly to find Coco inches from my face.  Her eyes were wide.  She stared at me for a second, then said in a low whisper, "I'm going to be sad when you die."  Then she walked away.

Today on Creepy Things Your Kids Do! 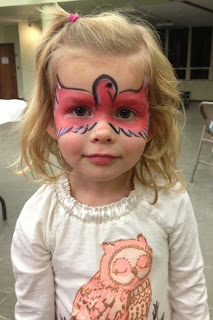 I had a dentist appointment a couple days ago.  It was just a cleaning but they told me I must return soon to have a crown placed on a particularly unhappy tooth.  It was not welcome news -- my last crowning didn't go so well.

I said I understood the importance of crowns, of course, and would be happy to come back at a most convenient time to have another crown installed by their extremely capable hands but the only problem was, you see, when I do I'm going to freak the hell out.

I told both the dentist and the dental hygienist, both lovely women who listened to me carefully with nodding heads, that pretty much everything they do to me in the dental chair these days is triggering my fight-or-flight response.  And honestly, truly -- and I really mean this -- I do not want to fight them.  But I will.

The dental hygienist began chuckling and said, "Uh-oh, there's going to be a red flag on your file with a large note that says, "CAREFUL, SHE'S A BITER!!"  The dentist and the dental hygienist started waving their arms around and laughing at that -- "A BITER!  A BITER!  OH NO, A BITER!"

I was like, "What?  No no, ladies, I'm not going to bite you.  My arms are just going to fly up all synchronized-like and clock you both in the jaw at the exact same time, gangster style.  Then I'm going to run down the hall and out the front door wearing my bulky black dental work sunglasses and my teeny little dental work bib.  I'm going to fight AND flight.

They're not gonna see that coming.

They promised they would work with my newfound dental anxiety but I'm not convinced.  The dental hygienist walked me to the front desk and told the receptionist, "MJ here needs to schedule a crown as her temperament allows."  Then she patted my shoulder.

Our new refrigerator is pretty great except it started leaking all over the floor five minutes after the water line was hooked up to the ice maker.  We joked our fridge had an incontinence problem.  The thought did not make us too keen on drinking the water dispensed from the door.

The fridge repairman's scheduler made a mistake so the repairman showed up for our appointment four hours early, which would have been fine except I wasn't home.  And our cleaning lady was.

I received a frantic call from the cleaning lady, quite freaked out by a man trying to enter our home, claiming to be a repairman and insisting he had an appointment.  She was like, "No, you don't!" and he was like, "Yes, I do!"

By the time I got home, it was a tense stand-off indeed.  I'm pleased to report our cleaning lady did not assault the man with a Swiffer, though she held one at the ready.  I brokered the truce.  The fridge guy spent two minutes fixing the fridge and left, but the cleaning lady probably needed several drinks and a doobie to finally calm down. 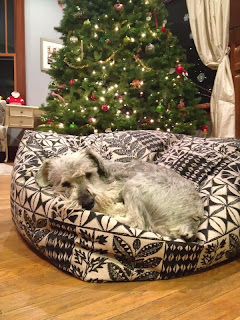 I sent Lucien to school without breakfast for the first time ever this week.  It was a rushed morning and Lucien refused to eat the oatmeal Alex placed in front of him.  Loosh said, "I don't want oatmeal, I want cereal" and Alex said, "There's not enough cereal for both you and Coco" and we all knew as soon as Lucien started eating cereal, Coco was going to demand cereal too and we were not up for that fight.  The oatmeal was plentiful, and it was good.

I stepped in and said, "Lucien, we're serving oatmeal for breakfast.  If you don't eat it, you don't eat it, but that's all you're getting."  As soon as I said it, I thought to myself, "Hmm...that could have been handled better, hardass"  because I knew what was coming.  I have a very stubborn son, you see.

As I feared, Lucien sat back in his chair, crossed his arms and said, "Fine, I guess I'm not eating breakfast then" and I said "Fine" but what I really meant was "Shit."

It was ye olde power struggle.  Dreadful things.  But as a parent, once you've entered into a power struggle, it's a bad idea to back down.  You must be strong and not let the little punk smell your insecurity.  So I held firm.  We drove to school in silence and then OH MY GOD, he ran off into school without breakfast.

I texted Seattle Mom my failings and she sympathized -- many a parent has been made humble by ye olde power struggle.  She suggested I go visit The Loosh at lunch, which I did, and when I saw his face light up when I walked into the cafeteria, and saw him beaming when all his little friends clustered around me, and felt him grab my hand, I knew we were going to make it through No Breakfastgate 2013.

Our blissful mother and child reunion was interrupted by a call from the cleaning lady yelling about some guy trying to break into our house.

Christmas is coming and I'm very excited.  It's my favorite time of year.  It's the only time of year I feel like baking, which can be quite alarming to my family members.  They sometimes walk into the kitchen slowly and ask with tense voices, "Hey....what are you doing over there?"

I feel energized by Christmas this year so agreed to lead the Christmas community service project at Coco's preschool.  It was a great project but took up a lot of time as well as space in my dining room.  Then I volunteered to collect money from all the parents in the class and buy all the teachers' gifts. I spent many a morning chasing a parent down in the preschool parking lot, begging them to give me money or sign a card and narrowly avoiding the squealing tires as they peeled away and yelled out the window, "Can't! Late for work!"

The teachers may wonder why half the parents in the class have the exact same handwriting.  I tried to disguise my forgeries by using different colored inks.

This was Lucien's recent karate homework on the theme of "patience." 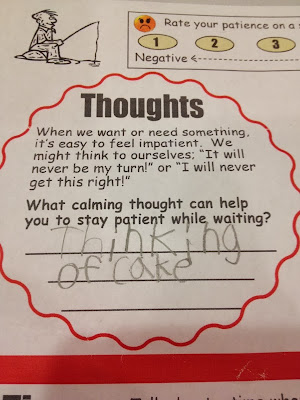 Maybe I should think of cake when I'm in the dentist's chair.