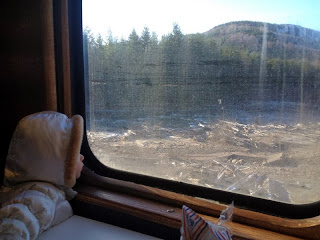 I'm going to put off my oppressive holiday to-do list a while longer.  I'm hoping if I ignore it long enough, it will either 1) go away or 2) get bored and start doing itself.

We've got a new refrigerator.  The old one worked fine but it was small and ugly and when we first moved in we found an entire rotten chicken inside, a present from the previous owner.  It's been difficult to shake the image of that chicken.

The new fridge delivery didn't go very well because I wasn't home when the delivery people arrived.  (Who comes at the beginning of a four-hour delivery window?  Nobody, refrigerator people, nobody.)  I was dropping Coco at school when the men called to say they were standing outside my house and a large refrigerator was sunning itself on my front lawn.

When I'm in a hurry on the road, everyone in Seattle seems out for a leisurely drive and all pedestrians seem hellbent on moseying.  I'm not generally a road rager but I may have laid on the horn once or twice.  My apologies -- it was full-on fridge panic.

I hadn't yet had time to empty the old refrigerator so I yelled "Hang on, I need a minute to empty this thing" as I ran into the house. OH, how they loved me then.

Nobody needs one million yogurts but that doesn't stop us from having them.  I began stacking the Danons and Fages in a pyramid formation on the floor and tossing bags of frozen peas and meatballs into the hallway.  I broke a sweat, which I hoped would endear me to the delivery men -- oh look, she's working so hard! -- but they had stone cold hearts.

It didn't help things when I yelled at my poor little schnauzer, "Why you always gotta be under my feet, dog?" as I dashed around the kitchen.  The delivery guys were evidently dog people because they couldn't even look me in the eye after that.

All's well that ends well.  The fridge is here and those guys aren't looking at me like that anymore.

Our new fridge is the obligatory stainless steel, a finish I don't particularly like but is still better than all the other options.  Why has no one come up with an attractive alternative to this awful fingerprint-riddled, non-magnetic surface?

It's a serious problem because Al and I are magnet collectors.  Check out this corkscrew beauty from the Czech Republic.  It fell off the fridge a year ago and the dude's head broke off. 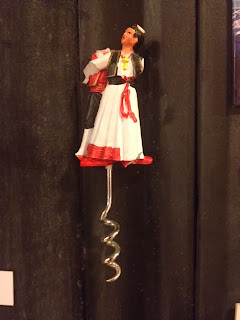 The magnetic paint can said I needed three coats of magnetic paint to make my wall surface magnetic.  I dug in with gusto but the "what a fun idea" became "what in the bloody hell is this demon substance" pretty quickly.

Magnetic paint is awful stuff.  It's thick and has to be stirred constantly to prevent the important magnetic bits from congealing into a sludgy mess at the bottom of the can.  It smells awful and good lord, it spatters.

After three coats of paint, my magnets fell pathetically to the floor.  I gritted my teeth and began applying more coats of magnetic paint.  I couldn't admit defeat.  I wasn't going to come this far for nothing, time to double down.

Magnetic paint stains your hands, an issue that concerned me since the next day was Thanksgiving.  Our friends on The Street of Dreams hosted the Thanksgiving gathering this year.  I imagined walking into the party carrying my dish of bubbly hot Midwestern Cheesy Potatoes (with a crunchy Corn Flake topping no less), then everybody noticing my dark gray fingers as I served them up at the table and deciding they didn't need potatoes on their Thanksgiving plates this year.

Six coats of magnetic paint later, I was done.  I had nothing left to give.  The wall is now to the point where some of our lighter magnets kind of stay on.  Until they fall off.

I covered the whole wall in chalkboard paint, too, so at least that part's cool. 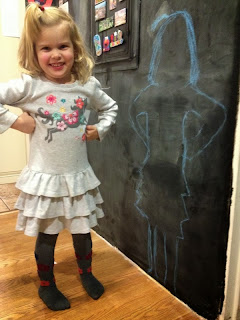 I was too right.  The deliverymen refused to put the hutch part on top of the base part because "It may fit perfectly, ma'am, but it's a little too perfect for us."  They were concerned about damage to our ceiling or floor, for which they would be liable.  They left it in two pieces in the middle of our entryway.  Alex gave me one of those narrow-eyed looks when he came home from work so I told him to stop looking at me like that and muster his can-do attitude, ASAP.

Seattle Mom and German Seattle Dad agreed to come over and help us with our furniture problem.  Al and I had a decent plan of attack, a careful plan that if executed properly should involve minimal damage to house surfaces.  But for some reason, in the heat of the moment, the four of us forgot the plan and just suddenly picked the thing up, lunged around a bit and shoved it on top of the base.

We did hella damage to our ceiling. 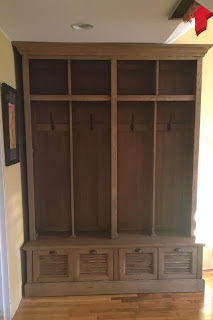 Bright Idea #4 was actually Al's bright idea.  He wanted to take the kids on the Mount Rainier Scenic Railroad Santa Ride.  It sounded great in theory -- a choo-choo trip through the foothills of Mount Rainer, a visit with Santa on the train, hot chocolate, fuzzy blankets, popcorn -- it was a goddamn Norman Rockwell painting. 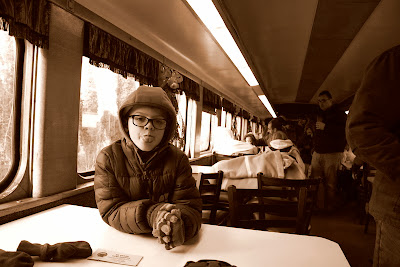 In reality, the Santa Train was a hot mess.  The inside of the train was as cold as the outside of the train. The water lines froze so there were no working bathrooms. Alex stood in line in the snack car for half an hour to pay a lot of money for lukewarm coffees.  There were many screaming babies.  And every time the train car lurched, all the people walking through the train car fell down.

Chaos reigned on the Santa train. 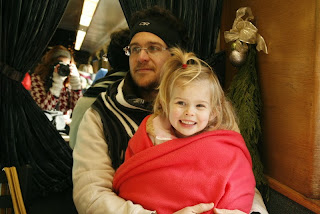 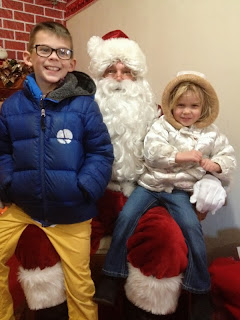 The kids finally got to chat with Santa and afterwards he handed them some cheap plastic toys.  Coco got this generic Barbie.  She spent the rest of the trip making Fake Barbie do grotesquely terrible things. 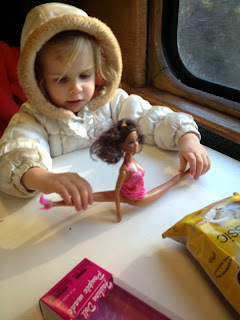 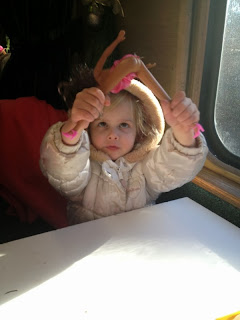 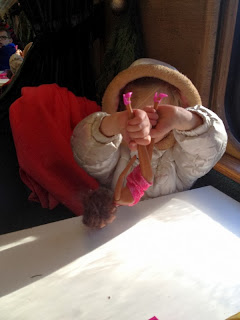 Until it all went wrong -- 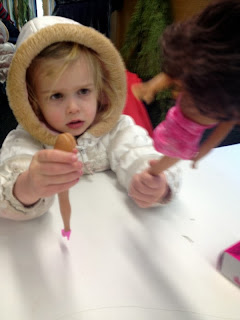 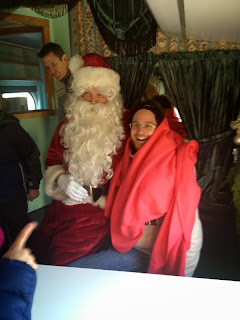 
We talked about it and have decided to lay off having ideas for awhile.  They're exhausting.
MJ
Posted by MJ at 10:37 AM