Yo from the Hoh 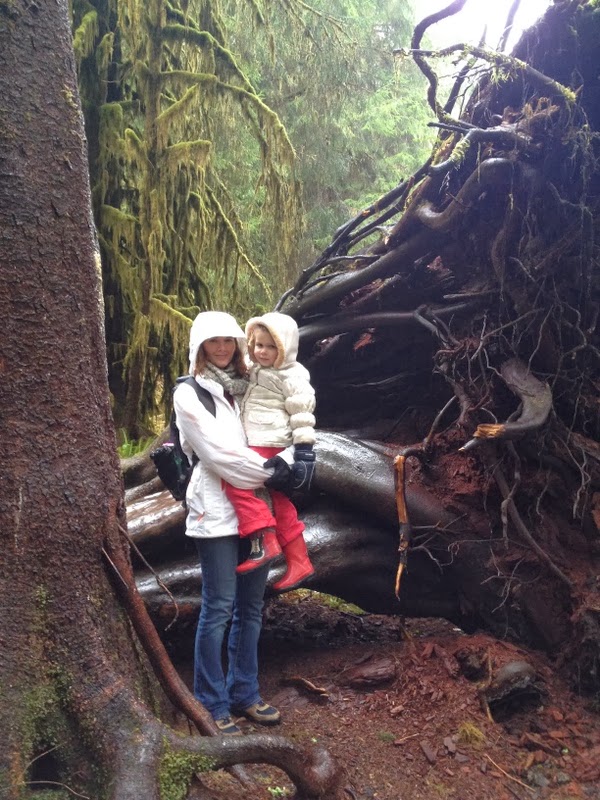 To the naked ear, visiting a rainforest in the Pacific Northwest in February may sound akin to showering naked outdoors at the North Pole.  It's actually much more enjoyable than that, thanks to can-do attitudes and the miraculous properties of Gore-Tex.

The kids were most excited for the ferry portion of the trip.  That is, until Lucien looked outside and nervously remarked the boat alongside the ferry had a large machine gun protruding from the bow.  It was a U.S. Coast Guard boat and it accompanied our ferry across Puget Sound with a man in black standing ready at his large boat gun.

Alex and I tried to make light of it and explain it in a way that wouldn't terrify the children -- "They're protecting us in case terrorists come flying at us on super stealth sonic boats and try to blow us up but don't worry that probably won't happen" -- but inside we were slightly unnerved.  We wondered what the Coast Guard knew that we didn't know (probably quite a lot) and prayed to be quickly delivered from our marked ship. 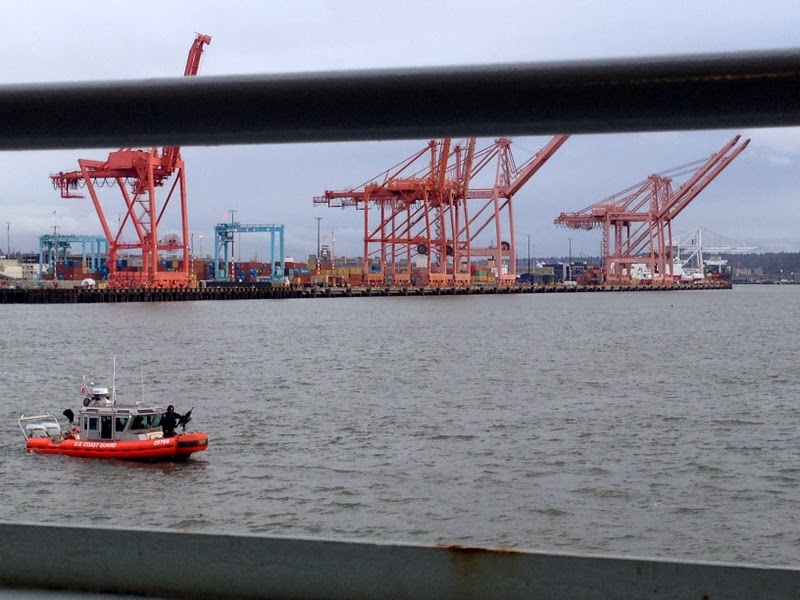 We survived the ferry and drove several hours to our cute rental house in the middle of downtown Forks, Washington.  Forks used to be a sleepy little lumber town in the middle of nowhere but is now known worldwide for something less staid -- it's the setting for the vampire-loving Twilight series.

As a result, things have changed in Forks since my last visit ten years ago.  There are many Twilight themed shops and Twilight themed B&B's.  Would you prefer "Edward's Room" or "Jacob's Room?"  You cannot have them both, foolish traveler, you must pick a side.

There's now a Twilight Tour upon which you can visit "Bella's House" and "The Cullen House."  "Bella's Truck" sits outside the market where she worked and there's a parking space reserved for Dr. Cullen at the local hospital.  Forks has plenty of parking so it's not upsetting to the locals one spot sits unused, waiting for a man (vampire) to come to work who does not actually exist.

It's a bit depressing, watching the previously humble Forks milk its brief fame with such obvious pandering to a rabid fanbase.  Enterprising shopkeepers would be foolish not to take advantage, of course, but I still miss the old vampire-and-werewolf-free Forks. 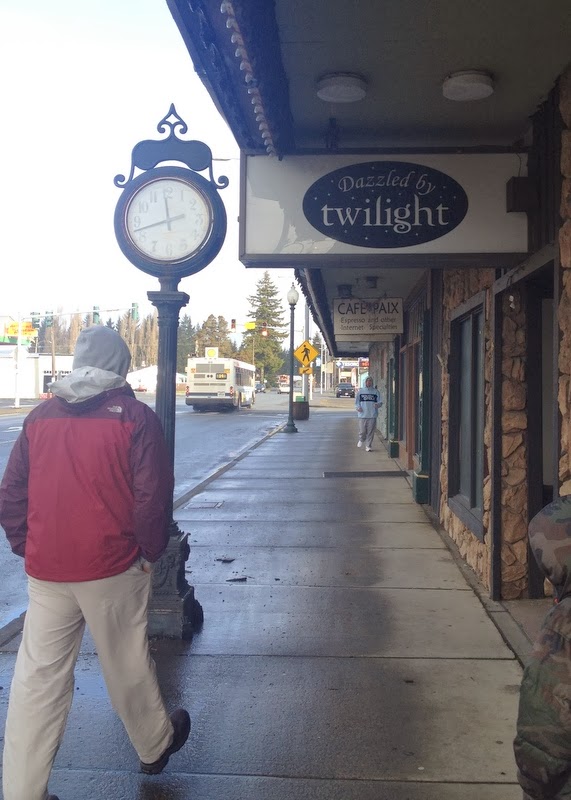 Alex is not dazzled by Twilight

I read the Twilight series when we lived in Paris. Coco was a tiny baby so I would be up at all hours of the night with her.  Twilight was my friend during that time; it was fun enough to make the sleepless nights with Coco on the couch bearable but fluffy enough not to require much thought.  It was exactly what I needed.

Because of my knowledge of the series, I became a very important tour guide for my family.  When we crossed the clearly marked "Treaty Line" I explained to Alex that was the line the vampires and werewolves drew to mark their territories.  I told him the story of "The Cold Ones" as we stood on the Quileute tribe's beaches in La Push.  I located where Bella cliff dived thanks to the Twilight Tour map I'd grabbed at the greasy spoon diner that morning at breakfast.

Alex listened thoughtfully then said things like, "I get it; the Quileute tribe turned into werewolves and they are the natural enemies of vampires. I understand why that would be so."  I suspected he was making fun of me but knew for sure when he said with a dreamy look on his face and wistful tone to his voice, "I'm so glad you know the rich history of these lands.  I feel I understand the tribe so much better now."

I decided to stop talking about Twilight after that.  I made one exception as I walked behind Coco and Alex in the rainforest.  Coco has a hard time keeping pants up thanks to her lack of hips and resistance to belts, and as they slipped further and further down I said, "Now THAT'S a New Moon" and then laughed hard all by myself.

The Hoh Rainforest is not at all related to Twilight.  It's also one of the few temperate rain forests in North America and is exquisite in its uniqueness. It is no exaggeration to say we were the only car in the parking lot.  The Hoh Rainforest in February is not a hotspot destination. 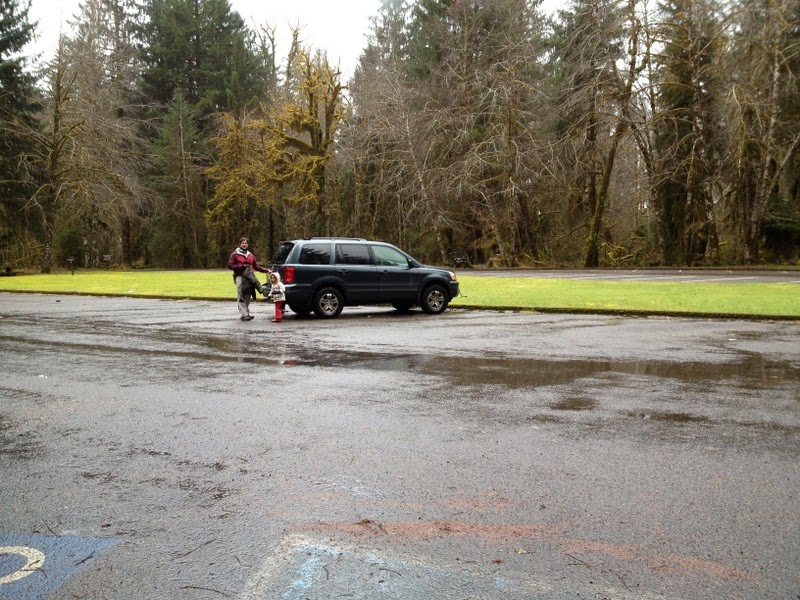 It should be.  I've been to the Hoh before but this visit was my favorite because we were all alone.  It made the rainforest that much more magically spooky. 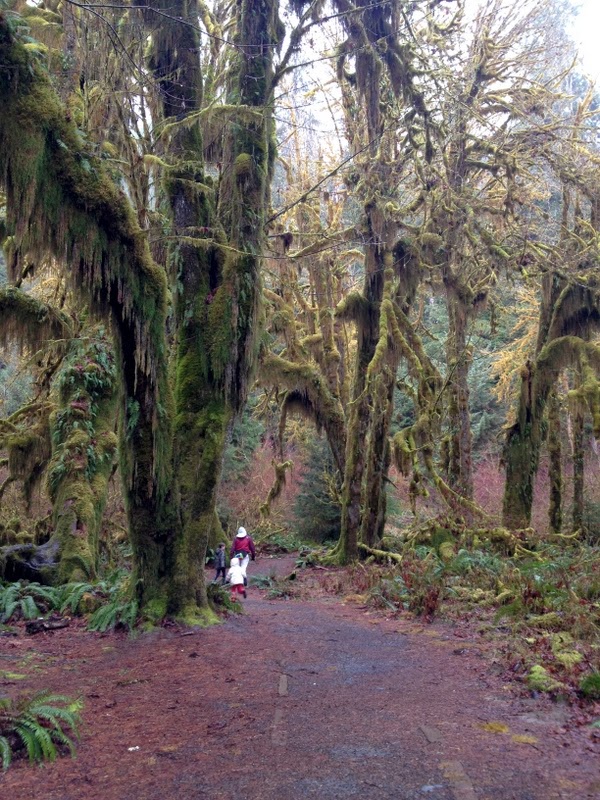 We encountered an ethical dilemma in our aloneness.  There was no one posted at the ranger station to collect payment, only a sign requesting we drop our entrance fee in the box outside the visitor center.  Alex and I grinned at each other -- it was a teachable moment!  We were going to teach our children about being honest, and doing the right thing, even when no one is looking.

We marched to the box at the visitor center, grabbed an envelope and began our loud and proud speech about personal responsibility.  We pulled our wallets out, squinted at the bills inside, then glanced quickly at each other in alarm.  We had only $10 cash between us. The entrance fee was $15. And those kids were watching us like tiny hawks.

Alex and I began muttering back and forth through clenched and smiling teeth.  "Just shove the cash in fast, maybe they won't notice," said Alex.  So I did.

We should have known that wasn't going to work.  Lucien sees all and Lucien knows all.

"That's ten dollars, where's the rest?"
"Well, son, it's all we have."
"Well then we can't go in, right?"
"Well... actually we can."
"You said we have to pay!  You said the parks need the money!
"We can support the parks in other ways, such as placing garbage in proper waste receptacles."
"You have to leave them your credit card number!"
"Oh hell no, son, you're trippin'."
"You said we have to pay the fee, even if there's no one around.  But that's not the fee!"
"You're making us uncomfortable."
"We have to write them an IOU!  You guys! Why are you walking away?!"

We should stop trying to teach valuable lessons and just hope for the best as usual.

At one point while walking through the lush, deliciously fresh rainforest, we decided to go slightly off-road to get down to the water.  Alex slid down the steep muddy semi-trail first, then turned and urged Coco, "Jump!  I'll catch you!"  She jumped because she trusts her Daddy with her whole heart.  Alex caught her fine but her weight threw him off balance so they both went down hard in the mud and slid the rest of the way down the hill.

Coco was so stunned she didn't even cry.  By the time she considered crying, Lucien and I were laughing so hard a small smile appeared at her lips until it took over her entire face. She seemed proud to walk the rest of the day in her mud-encrusted clothing.

I shouldn't have been so quick to laugh at them; on our way back up that hill I slipped and my hand landed in a pile of elk poop. It's cool, I was wearing gloves. 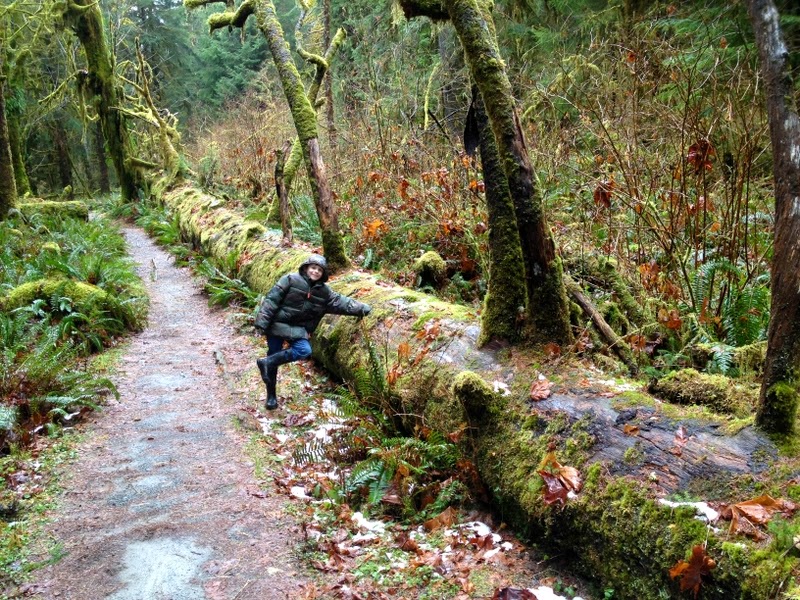 If a tree falls in the rainforest and no one is around, does Lucien still make a sound?
Yes. Many.

The Olympic Peninsula coastal beaches, similar to the rainforest, are at their most incredible when you're the only ones on them. 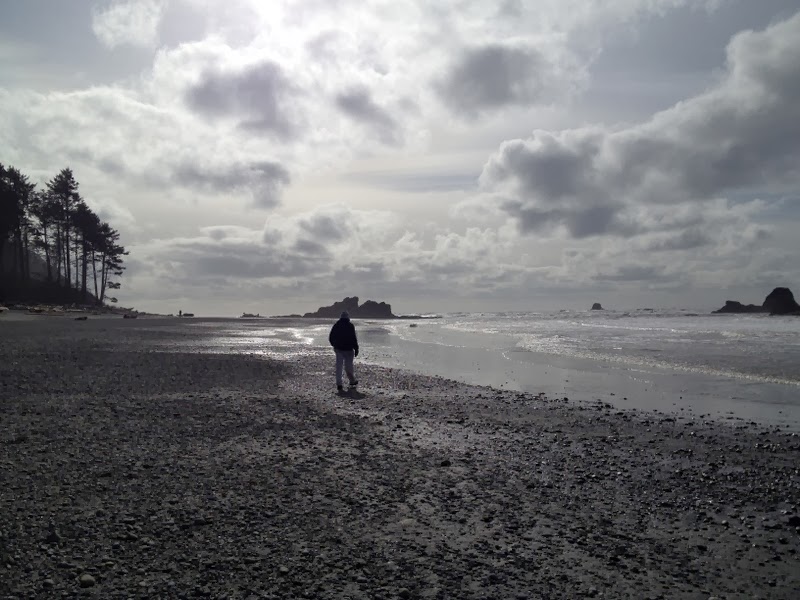 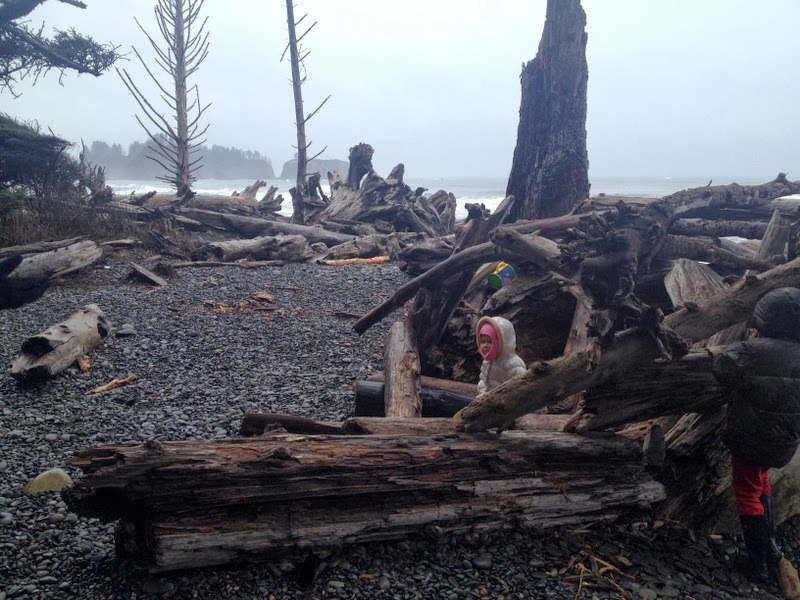 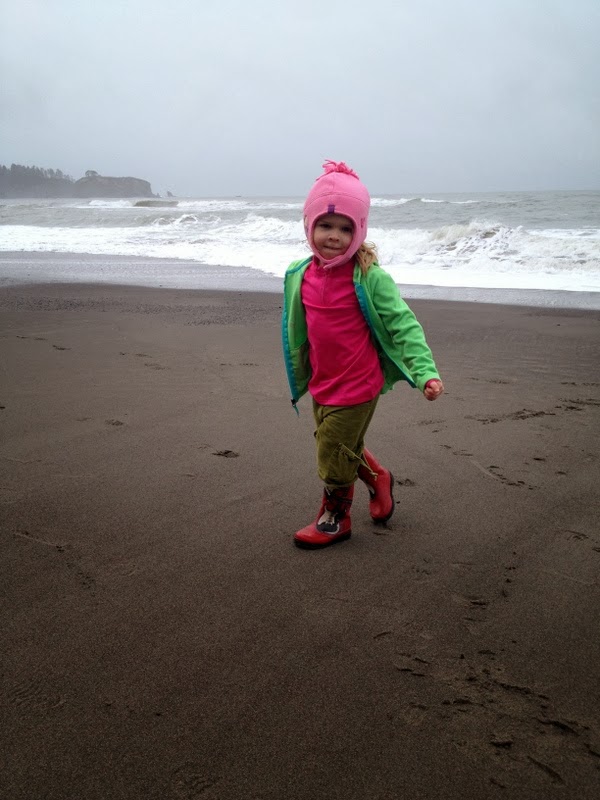 Coco was knocked over by a rogue wave and landed in the raging surf at the first beach we visited.  That's how she ended up back in the car ten minutes after arrival, pantsless, eating peanuts and reading The Complete Idiot's Guide to RVing. 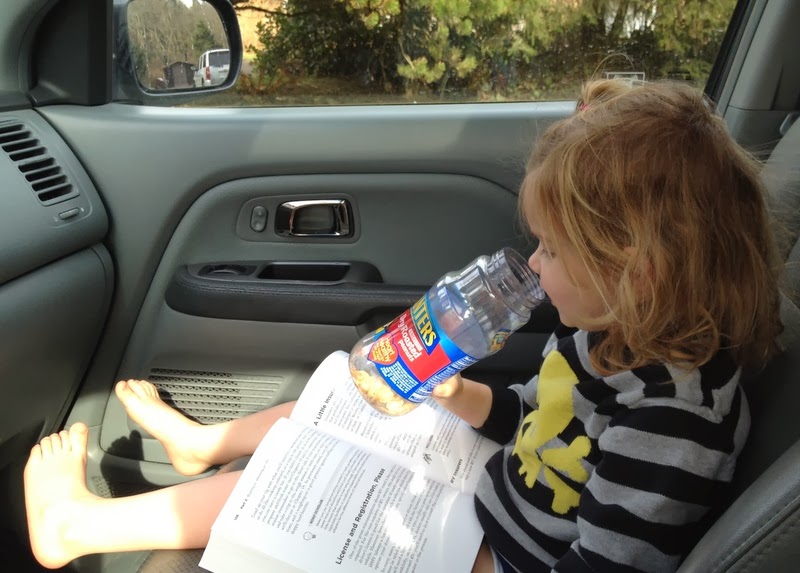 I was very tense about Lucien also falling into the waves but Alex advised me to be more Buddhist about it and picture Lucien already wet.  It worked.  Lucien fell down soon thereafter and it didn't bother me at all. 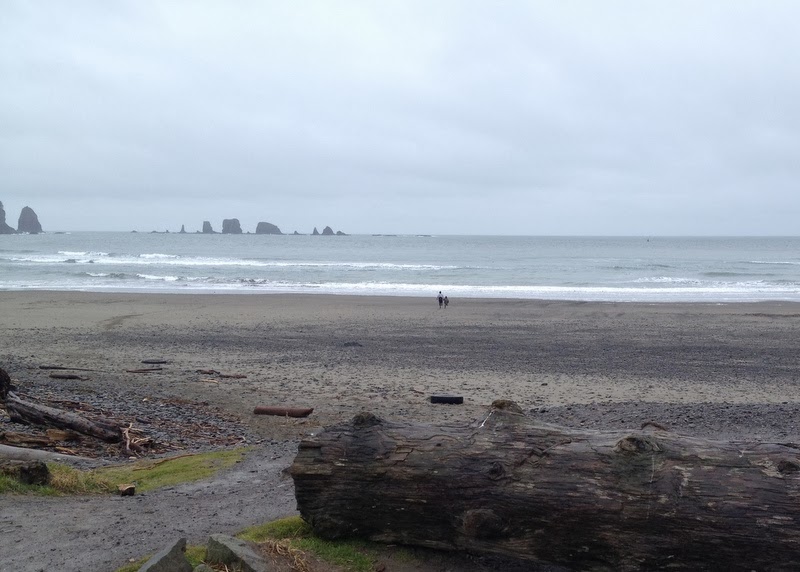 Those two tiny figures in the distance above are Alex and Lucien running towards a sea lion we spotted just offshore.  As they stood watching, the sea lion lunged up and out of the water and caught a seagull straight out of the air.  Lucien screamed.  He now knows nature is heartless and untrustworthy.

Our Olympic Peninsula trip was awesome but it certainly wasn't perfect.  There were some squabbles between the kids, some disagreements between the children and their parents.  Lucien may have told us he wanted a new Mom and Dad because we were mean.  At one point during a tense stand-off, I said, "Lucien, are you really listening to me right now?  Because it kind of sounds like you're just humming The Imperial March from Star Wars while glaring at a spot somewhere over my head."

Family trips are family trips, after all.   During the frazzled times they don't feel like they're worth it but then you get home and look over your pictures and realize they were SO WORTH IT. 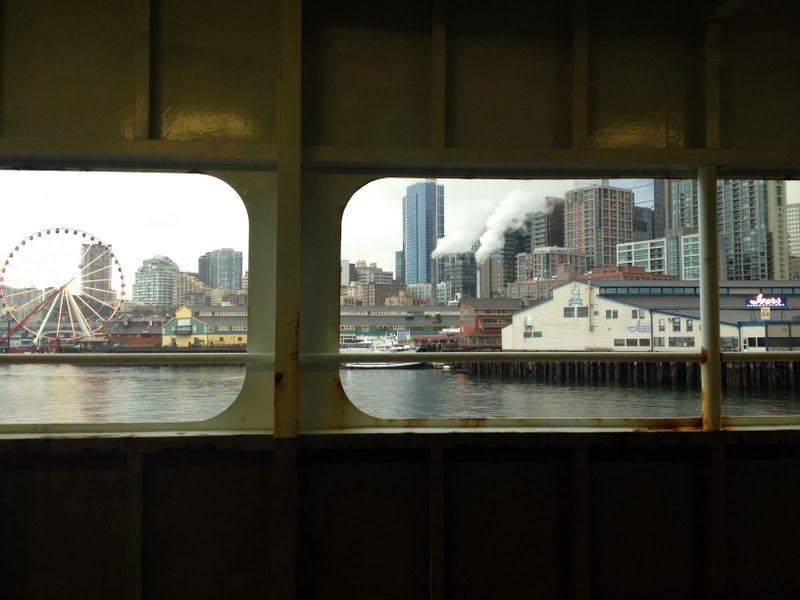 The ferry of doom pulls back into Seattle without incident