Mary in a bell

This is a preschool field trip I recently chaperoned.  We used the city bus to get there and back because we love the environment at fancy preschool.  Yee-haw. 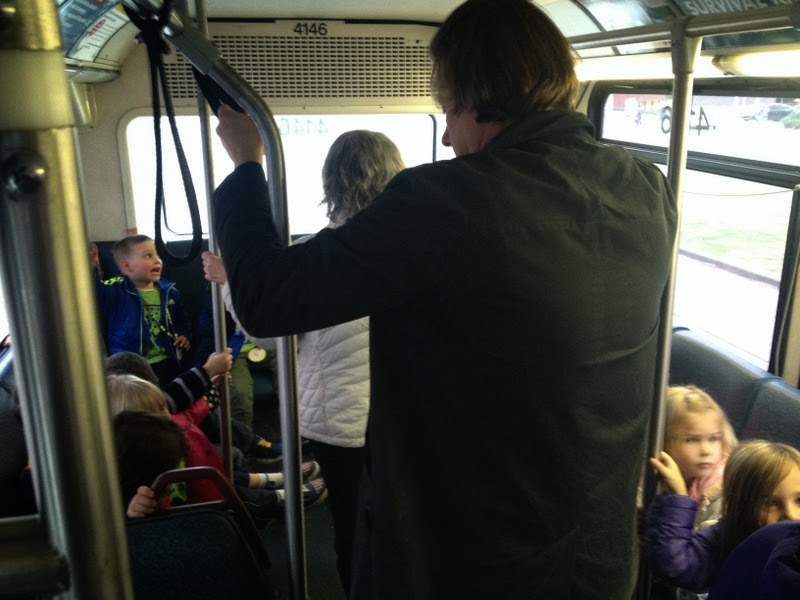 We may love the environment but we chaperones don't love the anxiety and logistics involved in putting 20 kids on a city bus already full of people and getting all 20 back off again.  I had a nightmare the evening before the field trip and you guessed it, I left my entire group up in there somewhere.  As of my waking, they hadn't been heard from since.

Yes, we preschoolers may love the environment but I'm not sure our fellow riders loved us an equal amount.  That was evidenced by the face of the one guy who got pinned in the back corner.  His expression turned from genuine friendly smile into frozen mask of terror as tiny kids piled all around him and asked his name repeatedly. 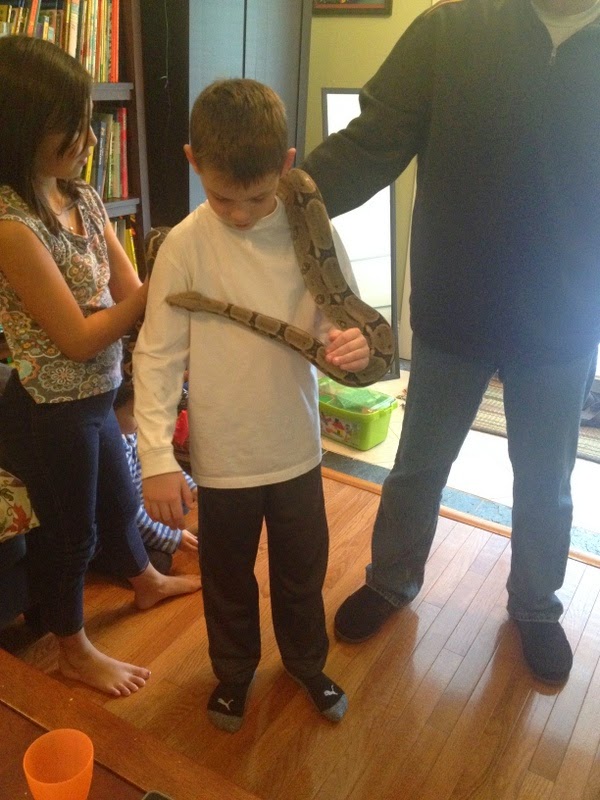 It's Lucien and a gigantic snake.  Just be cool.

Let's talk holiday.  Christmas is my favorite holiday but it's gotten harder.  Christmas as a kid was about twirling in circles in new holiday dresses and sucking on candy canes. Now it's about sitting bolt upright in bed in the middle of the night nursing the panicked thought, "I forgot to put the speech therapist on the thank-you holiday gift list!"

(I then go downstairs and write her name on the list immediately, lest I forget to purchase an Amazon gift card for the woman who made my unintelligible daughter somewhat intelligible.)

I miss being young at Christmas.  Gone are the days of lying under the Christmas tree with my brother, staring up into the branches at the lights and giggling. We had large-bulbed brightly colored lights on our tree back in the early 80s, not the chic tiny white lights of today.  Those giant hot lights could burn your nose off if your face got too close so lying under the tree was flirting with danger.  In addition to the potential injury, the lights blinked maniacally giving our living room the constant feel of a disco.  It was a 1980s Christmas and it was glorious.

My mom was often baking things.  She probably felt the same way I feel now when I'm trapped in the kitchen baking things.  Had I understood back then that Christmas could be stressful, that it was often an agonizing month-long preparation purgatory, my six-year-old self surely would have helped Mom or at least patted her on the back reassuringly.

Or maybe not, because I was busy.  I was busy grabbing Mary, the blessed mother of the baby Jesus, from our nativity set, sticking her head inside a bell-shaped Christmas tree ornament and declaring her "under the hair dryer at the beauty salon."  Mary was more often dangling from that "dryer" than resting in the manger with her newborn son.  My mom suspected this activity was sacrilegious but Mary's head fit so perfectly inside that bell there's no way it was wrong.

In other holiday news, Thanksgiving happened.  My parents flew in to join my sister Raba and sister-in-law Zee at our table. It was a warm and happy time but we missed my sweet brother who couldn't get the time off work to make the trip. He probably misses simpler holiday times, too.

We added a stray to our family Thanksgiving, a French man from Alex's work who had never experienced Thanksgiving before.  French Man is outgoing, warm, excited to sample everything Seattle has to offer.  He smiles all the time.  He bounces up and down a little when he talks.   His hugs are like being enveloped by a psychotically happy octopus (How can he have so many arms?). He's such an enthusiastically positive force for good, Alex once said, "It's like he's not French at all!"

(our stereotypes are expressed with the greatest affection and we miss you, French people...)

French Man's presence at Thanksgiving upped the ante.  I would normally have foregone many traditional staples for more contemporary options but instead felt the need to stick with the oldies, most of which sound unpalatable to foreigners.  Pumpkin pie?  Cranberry sauce?  Potatoes covered in so much brown sugar and butter they should be classified as dessert?   Crunchy curly things on the green beans, what?

I expected at the very least some hesitation but French Man dove into everything and pronounced it "amazing!" and "incredible!"  I wonder if there's anything I could have thrown his way that would have broken his can-do spirit.  Maybe Jello with suspended sliced bananas?  Easy Cheese on Ritz crackers?  Marshmallow Fluff eaten out of the jar with a spoon?  I'll have to invite him again to try these things and will report back. 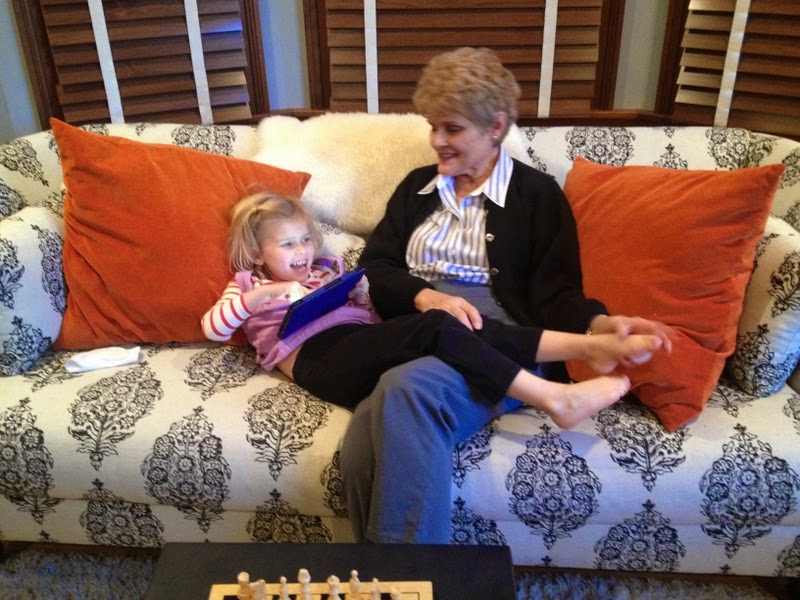 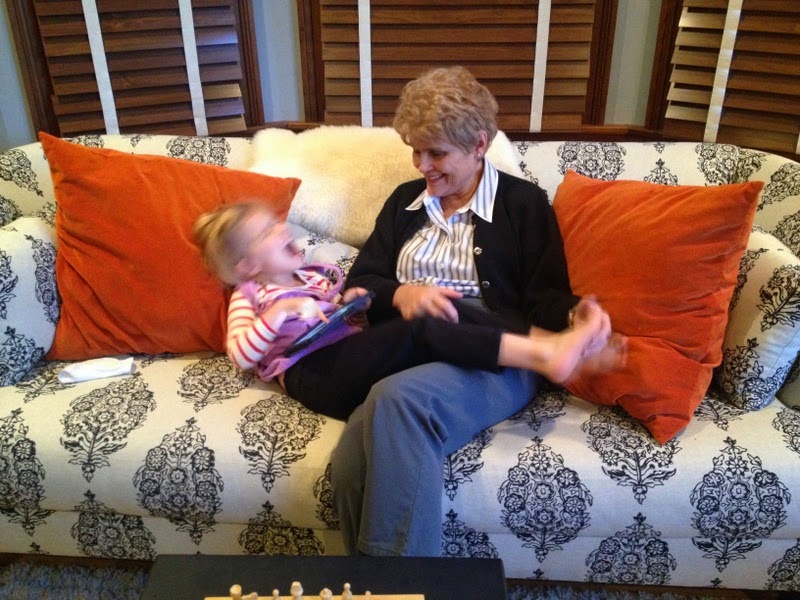 Speaking of French people, Alex and I attended the Beaujolais Nouveau event, sponsored by the French-American Chamber of Commerce, a couple weeks ago.  It was a fancy event held on the top floor of our tallest building downtown.  It was an impressive location for a wine that's widely agreed to be awful. 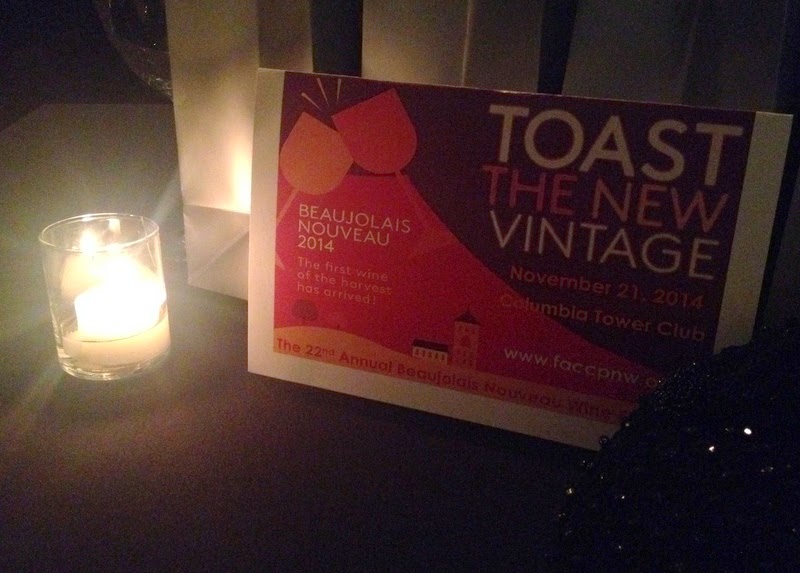 Thankfully there were other things to drink besides the B.N.   I accepted a glass of rosé from the roving servers when we arrived and immediately said, "Alex, we've got to ask the bartender for the name of this wine, it's incredible."  Alex walked away to do just that and returned a few minutes later with a kindly Frenchman who kissed my hand and said, "I hear you like my wine, Madame."  I asked Alex to get the name of the wine and he returned with the winemaker.  It was well played, Al.

The Beaujolais Nouveau fête was full of "somebodies," a few of whom I didn't like.  Once they've reached "somebody" status, some people stop being authentic and start being schmoozy to an uncomfortable degree.  They should also lay off the tanning beds because it's Seattle in winter and they're orange. 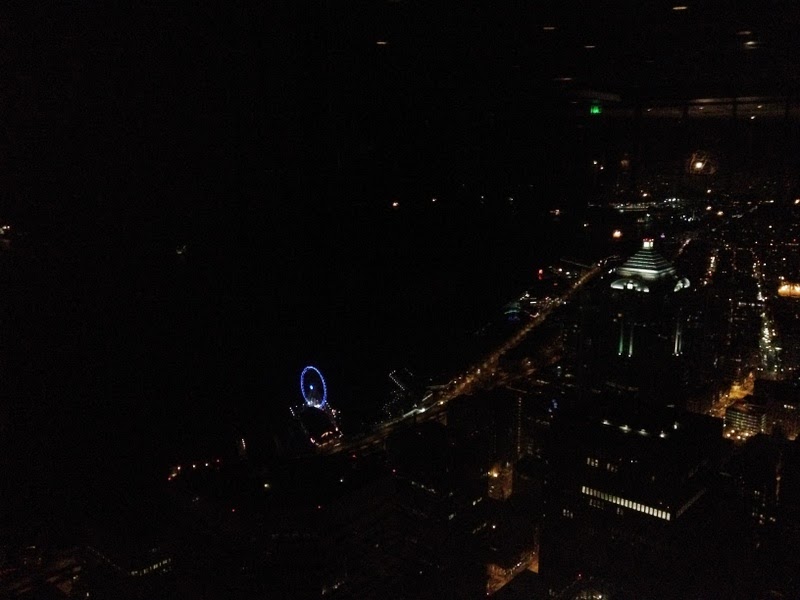 Orange folks aside, the view of my city was awesome

Most of the people I met were great.  I made a new friend at our table when he leaned over and asked, "Why are you sitting there laughing all by yourself?"  I was indeed laughing all by myself because two elderly people had begun dancing right next to my chair.  It would have been a sweet moment but for the nature of the Serge Gainsbourg song to which they were dancing.  Alex is a fan of Serge so I know most of his songs, including the English translation of his oft-salacious lyrics.

I'm pretty sure those sweet silver-haired people aren't as familiar with Serge as I am.  I leaned over to my new friend and said, "Do you think they know they're dancing to a song about doing it in the butt?"


I'll be under the tree if anyone asks.
MJ