Kafka is a riot

The bad news is I'm guilty of blog neglect.  The good news is I've been neglectful because there's so much incredible fun livin' going on around here. 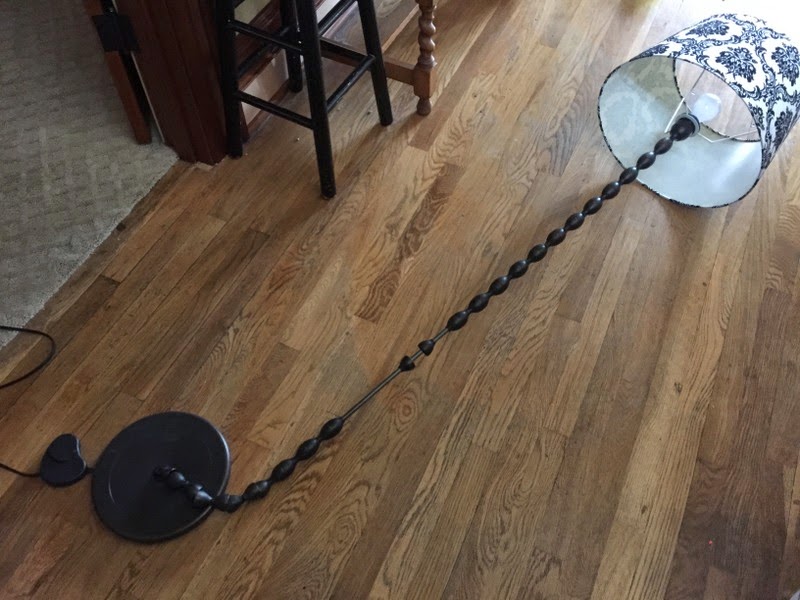 For example, the kids and I have recently taken up geocaching.  Geocaching, to most participants, is an exciting worldwide treasure hunt using GPS coordinates to find random hidden stuff stashed all over the place.  For me and my two kids and my finicky inaccurate GPS, however, geocaching is being lost in the woods for two hours, walking in circles, and never finding what you're looking for.

We knew, thanks to a clue on the geocache website, that the thing was hidden in a fake rock at the base of a tree.  We eventually began kicking rocks under every tree we passed in a desperate attempt to find the thing and feel successful.  Trust me, you do not realize how many rocks are under trees until you start looking for a specific one under a specific one.

In other fun news we lost the Super Bowl.  We threw a Super Bowl party that was really exciting and energy-filled right up until the end of the stupid game.  Our guests were so upset, so desperate to flee and nurse their wounds in private, they left within thirty seconds of the last play. They left in such a rush and in such emotional states, two people left without their shoes.  Sad barefoot football fans roaming the streets, that's what that day did to us.

We're mostly over the loss but it's hard because our house continues to mock our pain.  Every morning we come downstairs to this festive bunch of Seahawks balloons which, for some upsetting reason, refuse to die.  I could pop them but I paid a lot of money for them so can't bring myself to do that. Perhaps I'll let Coco play nearby with a ladder and a sharp knife. 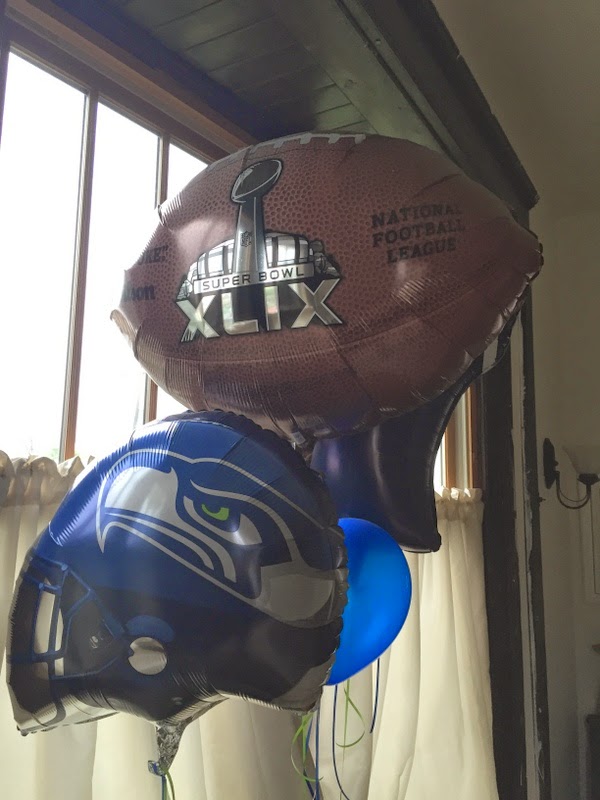 Alex and I felt awesome being out late with the band-listening crowd.  Band-listening people wear perfectly worn-in jeans and vintage corduroy jackets with ironic patches on the back like "Pete Peterson's Family Friendly Gun Shop!" Indeed, it was fun to feel part of the scene again but then we made the mistake of leaning against the back wall.  We immediately began dozing off from the overwhelming fatigue our aged bodies were experiencing.

We went home halfway through the set, leaving all the hipsters wearing overalls and women with ombre shaded violet hair behind.  It's OK to try to be young again but it's also OK to be true to your damn selves and get out when your feet start to ache from all the standing. 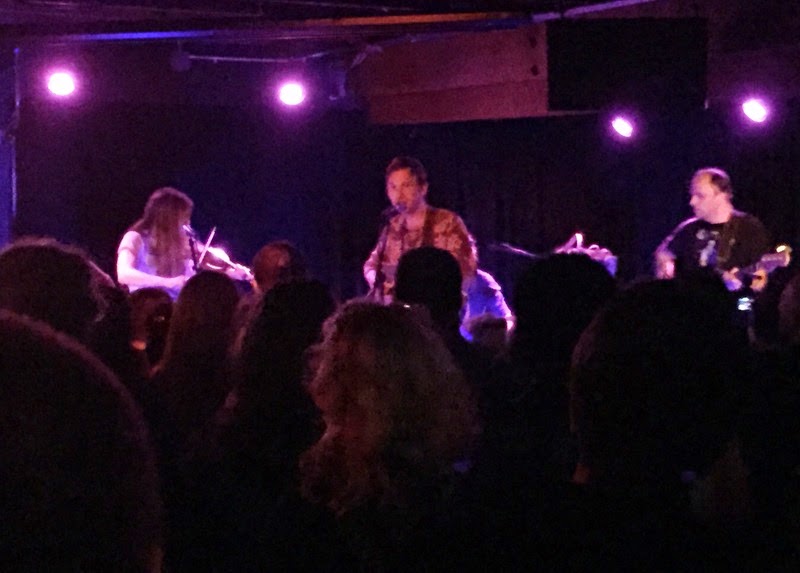 
I'm still learning how to throw pottery on a wheel.  I'll let you know when I make something that doesn't make people laugh out loud upon seeing it.

I'm also in a writing class.  I needed a boost for my Paris book writing, needed to shake off the stagnant place in which I found myself and mix it up a little.  I enrolled in a humor writing class, first class was last week.

Right off the bat, immediately after roundtable introductions, our teacher told us to re-write the first paragraph of The Metamorphosis by Kafka but make it HILARIOUS.  We would then read our paragraphs out loud.  It was strongly insinuated if we didn't make our teacher laugh, we were failures. He gave us ten minutes for this exercise which, when re-writing Kafka as uproarious comedy, doesn't seem like enough.

That was quite a bonding experience.  We scribbled furiously, occasionally stopping to glance at one another and silently mouth swear words in wide-eyed panic.  I re-wrote The Metamorphosis in first person and turned myself into an ant, awakening in my room to the sudden overwhelming desire to lift a Buick.  The teacher laughed so I didn't fail.  Not yet anyway.

Work continues on Banister Abbey.  Supermodel Neighbor is here again. He now carries enough authority in the house to give my children stern talking-tos when necessary and has his own shelf in the refrigerator. He's family.

S.N. is currently building stair railings for our two flights of stairs.  It's a momentous time -- Banister Abbey is finally going to have banisters.


As a reference, this was the 3rd floor stairway when we first viewed the house nearly three years ago -- 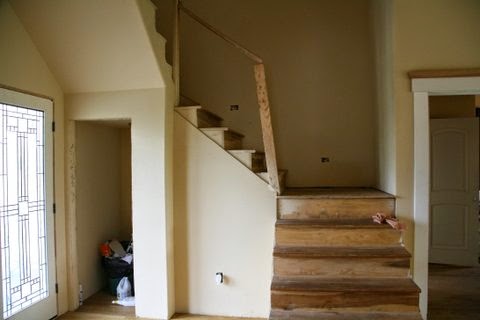 
Before we moved in, we had a temporary railing made of splintery 2x2s installed so nobody would fall off the stairs and die on their way up to the office -- 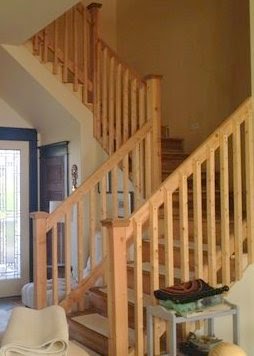 But now, after just a few weeks of Supermodel Neighbor cursing repeatedly, here's where we are -- 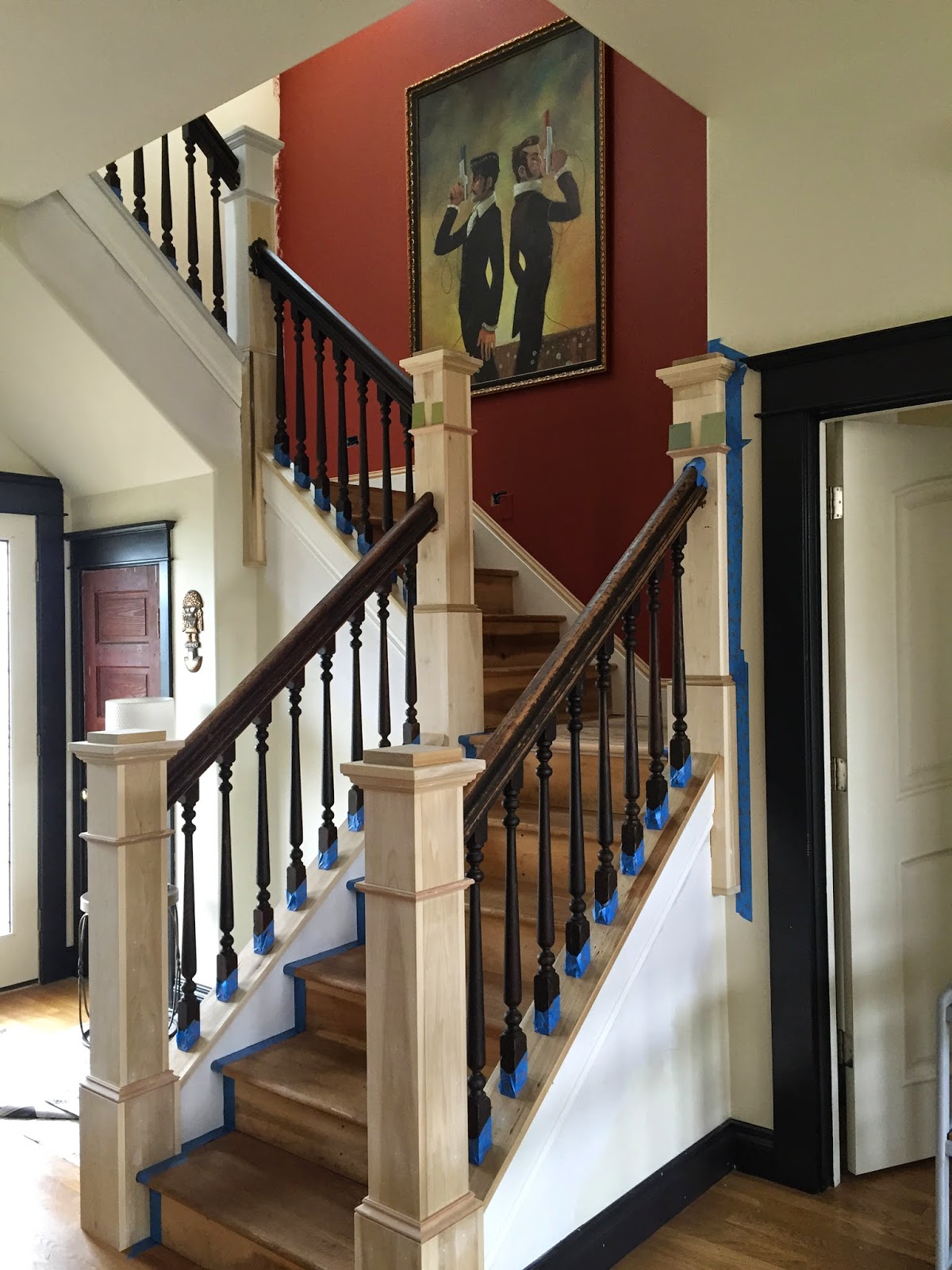 Never mind the blue painters tape.  I'm in the process of priming and painting the unfinished newel posts and skirts.  It's still a work in progress but trust it, it's going to have pizazz.

The balusters and hand rail used above are originally from the main staircase. They are original to the home, circa 1904, and were located here when we first saw the house -- 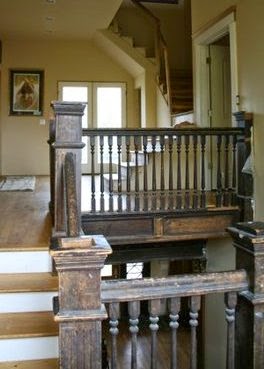 they don't make them that awesome anymore


Now regarding the picture at the beginning of this post -- Despite being the only person in the room -- in fact the only person on the first floor -- when the lamp was snapped in two, Coco still claims absolutely no knowledge of events. 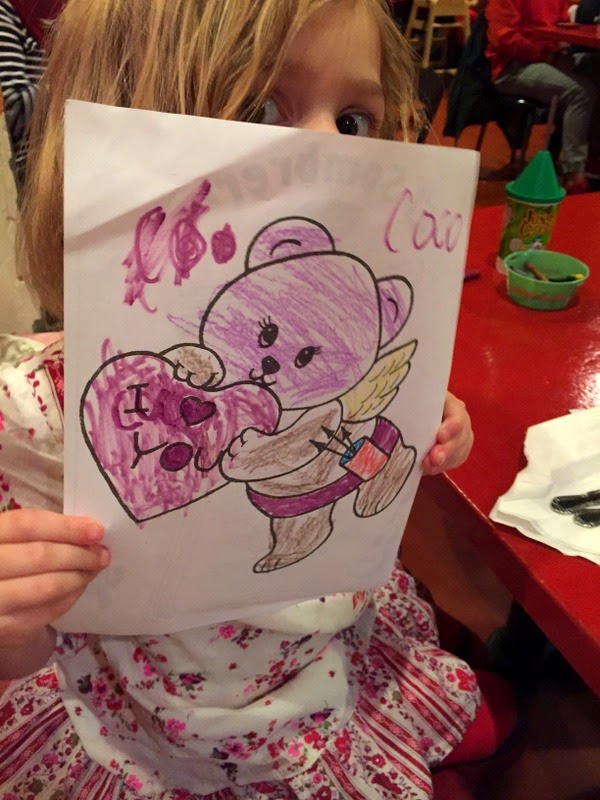 
My apologies for neglecting the blog.
In my defense, it's very difficult to blog when I'm lost in the woods.
MJ
Posted by MJ at 10:09 PM