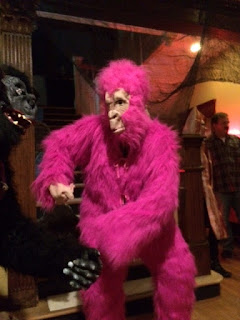 I'm about to disappear for a month.  I'm doing NaNoWriMo this year so if I'm in front of a computer, I'd better be working on the burgeoning Paris book.  The Paris book has been years in the making, written in fits and starts as inspiration strikes. It hasn't worked out so well in the productivity sense so it's time to f*ck inspiration and just hammer the thing out, like birthing a calf but hopefully with less slime.

That should be NaNoWriMo's new slogan:  F*ck inspiration, just hammer it out like birthing a calf.

Before I head off to dominate the month of November, a month that will undoubtedly involve seedy hotels and dark smoky bars and intermittent acid trips (it's possible I'm getting my information on how to be a good writer from the Wikipedia pages of my favorite authors), I'm going to leave this blog on a Halloween party note.

The preparations for our Halloween party become more streamlined every year. This year was the easiest because we hired a caterer. I should hire a caterer for my daily life.  I would like to come downstairs in the morning to find my toast artfully displayed on the table with an array of topping choices.  Plus caterers constantly re-warm everything; my scrambled eggs would never get cold.

The caterer was helpful in that she made food people actually wanted to eat.  I made the disgusting stuff nobody touches, per my usual, and yet my guests did not go hungry. Teamwork. 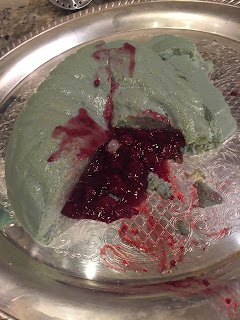 I made the brain bleed this year


As for the rest of the party, well, the caterer wasn't the only person to make things run like clockwork -- 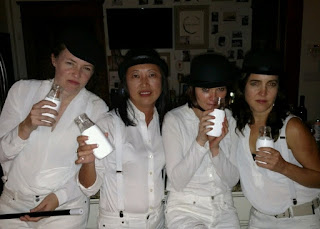 mercy, it's a Clockwork Orange


This year, Halloween was personal.  A Clockwork Orange is the only novel I've read that's made me physically ill.  I read it in college while sitting in a coffee shop. I was drinking a cafe mocha on a rainy Sunday morning, legs up on the chair across from me, stretched out all lazy-like.  All in all, a pretty cozy scene.

But when I reached the myriad of "ultraviolence" scenes perpetrated by The Droogs early in the story,  I no longer felt cozy.  I felt horrified by the world and its occupants.  The disgust was so overwhelming, I ran to the bathroom and got sick.  I had never been nauseated by words before -- kudos on the powerfully written fiction there, Anthony Burgess.

Thanks to Burgess and his words I still can't catch a whiff of cafe mocha without feeling a pressing need to hurl.*

*It is not lost on me that my aversion to cafe mocha is a type of classical conditioning, similar to what Alex DeLarge undergoes in the novel to be rid of his violent tendencies. But I swear that is where the similarities between us end.

For whatever reason, Alex DeLarge was the first thing that popped into mind when considering a Halloween costume this year.  I enlisted some friends, told them this year it was personal, that I needed their help to exorcise this literary demon from my soul.

I'm glad I have friends loyal enough to follow me down this freaky rabbit hole.  We horrified many partygoers who shrank from us and hid in corners covering their faces.  Looks like I'm not the only person who has a visceral reaction to A Clockwork Orange.

It's also possible I have now classically conditioned some of my friends to have an aversion to me. 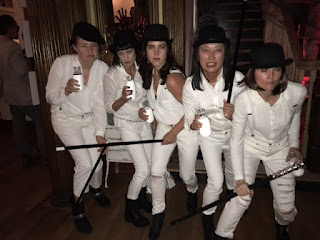 The tarot card/crystal ball reader returned this year.  My crystal ball reading involved delving into past lives, two of which appeared.  In the first life I was a swindler who was killed by an angry mob outside a castle.

The psychic reader said past lives only show up in readings to teach us something.  He said my past life was trying to tell me to remain honest and true to myself but that's not the lesson I took away from it; my takeaway was don't swindle, it won't end well, people will beat you.

My second past life was a dud.  He just kind of sat there, didn't do much of interest.  The psychic reader couldn't figure out what to do with him so I said, "Hey, what are you trying to tell me, past life?  Not to be boring?"  I love making funny jokes during psychic readings.

Halloween is the one party of the year where we parents get buckwild and stay up way past midnight. Alex and I awoke the next morning to a house that no longer looked like ours.  It looked like a trash heap.  It smelled like beer.  Several of my Halloween decorations were broken and all of the disposable cameras had been used to the fullest.  I'm cringing thinking about getting them developed.  Good Lord, think of all the butt shots. 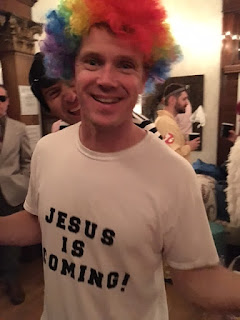 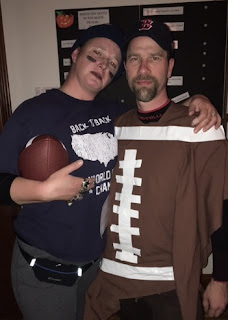 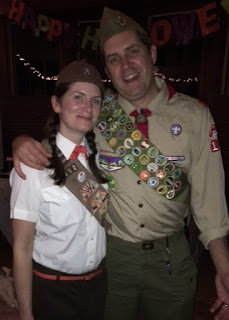 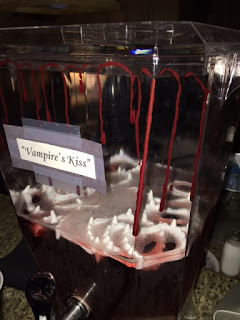 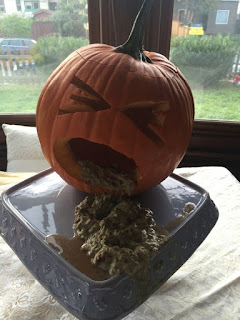 the pumpkin must have read A Clockwork Orange too


We host the Parents Gone Wild edition of Halloween every year; our friends host the family-friendlier pumpkin carving party.  Both events are happily anticipated.  The parents like getting buckwild and the kids like flinging pumpkin guts at each other. 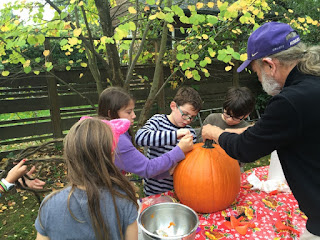 The Loosh carving with the besties he's known since he was a babe.
They're more siblings than friends the way these kids bicker.

I loved the pumpkin carving party this year because I pilfered some handmade tamales and carried them home in my purse to eat later.  Is that considered swindling?  Because if it is, I am not doing a good job of learning from my past life. 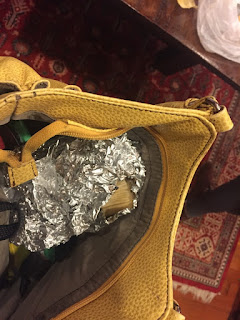 in my defense, tamales are delicious

We got some rough news from the vet recently.  The writing's on the wall regarding our sweet old schnauzer, Oscar.  He's struggling, is already deaf and rapidly going blind.  He falls often and has a hard time standing back up when he does.  But sometimes we catch him running across the yard with his tail wagging.  Sometimes he still cozies up to us and licks our hands.

While it may not be "time" just yet, it's definitely time for us to give him a lot of love, and begin saying our goodbyes, and feed him lots and lots of his favorite thing in the world, grilled salmon.  It's all yours buddy, all the salmon, take it.

The ode I wrote to Oscar several years ago is here. 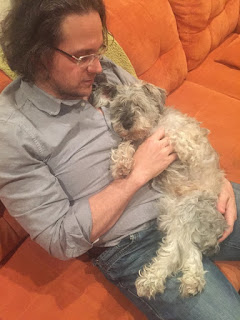 We love you, old man.  You've been a good, good dog for 14 years.
We'll send you off properly, promise.


I'm off to hug my crabby old dog then WriMo the hell out of November.
Let's birth that calf.
MJ