I don't have much time to chat; I'm knee deep in Halloween party preparations.  That's a literal statement because I currently have my stockpile of Halloween decorations stacked in the entryway.

Our house is usually thoroughly decorated by the 1st of October but it's taking me longer to organize this year because of life and its numerous commitments and stresses. We therefore shuffle through scattered severed fingers and fake spider webs in the hall the way one would shuffle through crisp brightly-colored Autumn leaves on a park trail.

I've realized I can no longer decorate the outside of my house for Halloween, which has deflated my enthusiasm somewhat.  Last week I placed fake tombstones in their usual location in the yard but returned thirty seconds later to find my gleeful desert mutt Natani chewing through them with rapturous joy. It was a welcome present from the mommy to her dog child and she thanked me for it with many styrofoam-laden kisses.

My dog trainer comes frequently so, believe it or not, things are calming slightly on the dog front. My dog trainer is so intimidating that when she tells Natani to "sit" our whole family sits.  I've never seen her smile.  She told me once I'm being "a pushover, a total pansy" when it comes to the dog.  It's true but it hurt my feelings all the same.

There has not been a dull moment with this dog since the kids and I grabbed her out of the desert. For instance, she likes to chase bees but the recent day she finally caught one was the day we realized she has a serious bee allergy.  Her face puffed, her skin turned red, her eyes swelled, she gave up on life  -- 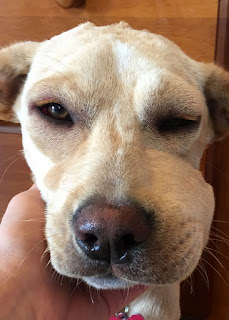 her face is not supposed to look like that
but congrats, dog, you finally caught one of the little f*ckers 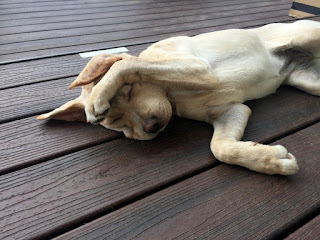 She recovered and has gone back to chasing bees.  Dogs can be stupid.

We've done quite a bit of hiking this fall.  We went to Mount Rainier with some friends and rented a cozy cabin with a fireplace, a dart board, and a hot tub.  Add a few bottles of wine, as we most assuredly did, and you have a recipe for either fun or tragedy.  Ours went the "fun" route but that was pure luck.

Mount Rainier is one of my favorite places to hike because I dislike "tree hiking." After five minutes of walking through trees, trees, more trees, I'm bored out of my mind.  I would rather hike through a parking lot because at least you won't get your boots muddy AND you can play the license plate game.

But Mount Rainier offers wide-open trails and subsequent wide-open views of the volcano towering above.  I will never tire of hiking there because it often looks like this -- 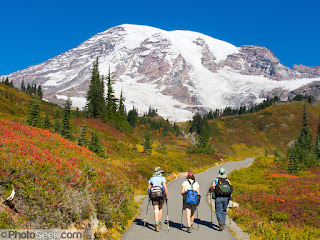 However, when it's socked in by clouds, you get something more like this -- 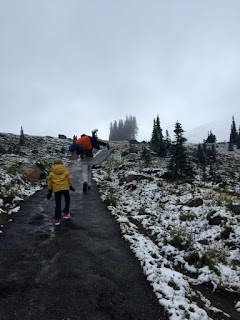 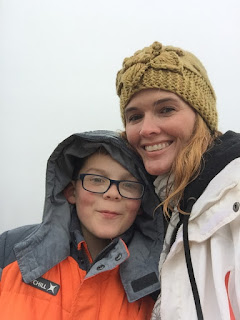 Smile, son, I swear it's right behind us

We are lucky Mount Rainier is only a couple hours away.  We will return when weather conditions are more favorable and less likely to tick off the children.

Coco turned 6 and chose to have her birthday party at the gymnastics academy.  She paired her favorite sparkly blue gymnastics leotard with pink fringed Minnetonka boots.  I have always thought gymnastics paired well with cultural appropriation and am thrilled to discover she feels the same. 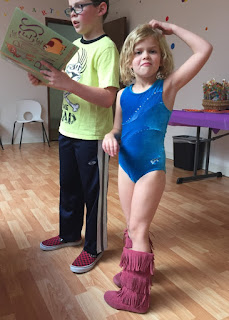 I can get mushy here and discuss the rapid growth of my children and how it both delights and depresses me.  Coco's age is mystifying; her current argumentative attitude suggests a much older person yet her huggable adorable self reminds me of the baby she once was.  I want to both reprimand her for sassing me and squeeze her face while babbling baby talk.  Sometimes I vacillate rapidly between the two;  it's a confusing time for both of us.

My feelings for Lucien are no different.  He holds my hand less frequently now and has begun rolling his damn eyes at his parents, how dare he!  He also now wears the same size shoe as me.  I don't want him to grow up, don't want him to stop cuddling with me on the couch, don't want him to leave me, ever, yet I can't wait for him to grow out of his current rain boots because they're cool and mine have recently sprung a leak.

Children aside, I also recently had dinner with President Barack Obama.

I attended a fundraiser for Senator Patty Murray and President Obama was the "special guest."  We have supported Patty Murray for years with our votes but we attended her fundraiser to see and hear the President.  She probably understood he was the bigger draw and didn't take offense. 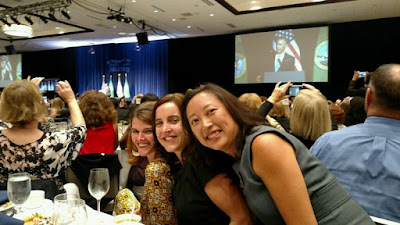 If your politics differ, I hope you can still feel happy for me -- I'm a diehard liberal and a fangirl when it comes to Obama.  My besties feel much the same. We texted each other pictures of our possible wardrobe selections for the event beforehand and voted on each others options.  We've never done that before.

I ended up at the nurse's union table because my friends are affiliated.  I am not a nurse.  It's a long story how I wound up in that chair but they welcomed me with open arms and I'm filled with gratitude for the opportunity to join them for the event.

One of the women at the table was introduced as "the bookeeper" but I heard "the goalkeeper" and then imagined people in the nurse's union fighting each other in grueling sports matches during their lunch breaks.  I bet I'm not wrong!

Obama was great, though for me it's unlikely he'd be anything else.  We all know he's an incredible orator.  He was inspiring.  He was funny.  He also looks tired.  I do not envy him his job, what a thankless tedious thing it is. 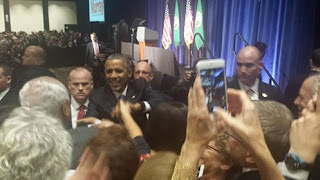 We rushed forward and tried to shake his hand as he left the room.  "The goalkeeper" at our table scored a handshake but we all missed.  That's OK, I'm not sure I wanted the Secret Service guys looking at me like that.  Their jobs are also tough.

Alex and I are still shopping for an RV.  We can't decide on the model.  We want something small, super compact, yet able to sleep four people.  It's harder than we imagined.  There is nothing that's perfect, nothing that checks all the boxes, and as of now we can't agree on which boxes can remain unchecked.

In the meantime we will continue to attend RV shows and shrug at each other.  The kids will continue to get bored and say things like, "Oh my God, another RV show?"  It's a huge purchase and we will not commit until we are sure so just relax, kids. 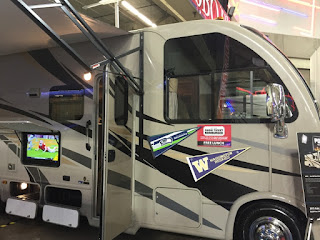 This one's amazing but it's four feet longer than I'm willing to go
since I'll be maneuvering it by myself much of the time around the Western U.S.
Help me.


I volunteered for a 4th Grade field trip yesterday.  It was an all-day field trip to a corn maze an hour outside of Seattle grown in the shape of Washington State.  The paths through it are the highways of Washington, marked with street signs and all, and there are landmarks built within with placards detailing the stories of Washington's towns, tribes, and significant events.  In theory, it's cool.

But when you're in charge of a group of 4th graders whose job it is to navigate the Washington State map you're given and told to find six towns/landmarks and answer questions about those very things before you can leave the maze, it becomes torturous.  The worst part was chaperones were not allowed to intervene.  If the kids made a wrong decision in their navigation, we had to let them make it.

That worked fine for the first couple sights because it was in the name of education and autonomy and skill-building.  I was able to hold my tongue.  But an hour in with four sights left to find, shit got real.  I'm only slightly ashamed to say I yelled, "WHY THE HELL WOULD YOU GO NORTH ON I-5 WHEN WE'RE TRYING TO GET TO OLYMPIA?"  because we'd been in there a long time and I was getting hungry.

I may not be the most mature chaperone but they have to love me anyway because I volunteer to go on all these damn things.

I blew off some steam that evening after the field trip by attending a concert by one of my favorite bands, Beirut.  I was tired, though, so didn't fight my way to the front.  Instead Al and I chose a wall we could sit against until the band took the stage, and when they appeared we could stand up but lean heavily against it when necessary to keep us upright. 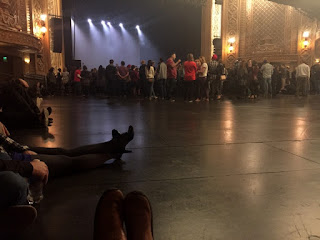 Anyone surprised I love this band?  They're from Santa Fe with a heavy mariachi influence.

I'm off to finally Halloween the crap out of my house,
MJ
Posted by MJ at 2:22 PM