I'm back at the Paris book.  I have a developmental editor working with me now and she's been huge. We're dismantling all my ideas from back in November and developing new ideas.  Who knew there were so many ideas?  It's exciting but my head's swimming.

While my head is in the bookwriting clouds, here's a fun game.  Guess which of these French quotes hanging on our kitchen wall Natani can reach? 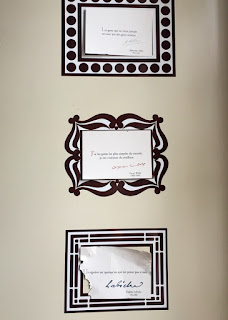 That was too easy.  How about this:  Guess what terrifying object Natani is growling at and fiercely protecting us from? 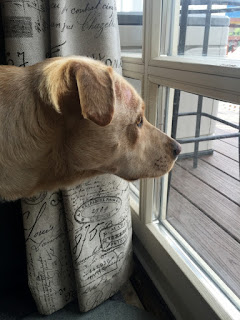 That's right!  It's her own toy!  She forgot it on the back porch and it then blew into a strange, unrecognizable and frightening shape.  I like to believe she felt foolish when I let her outside and she circled growling at it until she worked up the courage to approach and sniff, but I'm not sure dogs are that self aware. 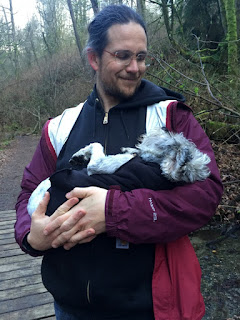 Nope, no worries, he's alive.  We just took him on a hike. He was happy for half of it and then he was most decidedly not happy at all.  He just kind of flopped on the ground and said, "no."  So we carried him back. 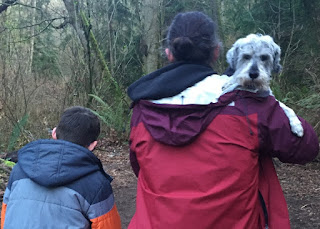 I'm too old for this sh*t

Seattle is a boomtown. Our population is exploding, our home prices increasing to ludicrous new highs. It will soon become common to hear "I bought this ramshackle 1957 bungalow for 7.5 kajillion dollars."

Our neighborhood is changing rapidly; old homes are being torn down on every block and clusters of skinny townhomes soon built in their places.  I hate these new ugly buildings and my kids know it. When we drive past yet another old home being tickled to death by a bulldozer, Lucien or Coco will mutter,"Dammit.  There goes another Victorian with turn-of-the-century charm -- the architectural details along the roofline were to die for -- being torn down to make room for an ugly modern box lacking in character and quality."

Hearing your words coming out of someone else's tiny little mouth is both eerie and heart-swelling.

Thanks to all this urban progress, streets are regularly closed in our neighborhood for big construction machines and utility crews.  Driving the kids to school has become a frustrating task because there are always new and unexpected "ROAD CLOSED" signs popping up in front of the car.  I then must improvise, zig zag around, find a new unimpeded path.  Then the next week there are more signs -- the new route's closed now, too.

I'm convinced someday there will be no possible route to school so we'll go back home and watch movies and eat Nacho Cheese Doritos.  The excuse I will call into the school will be "there are no more streets left."  I guarantee the office staff will understand.  They will probably be taking the call from their own living rooms, having found no viable route to school themselves. 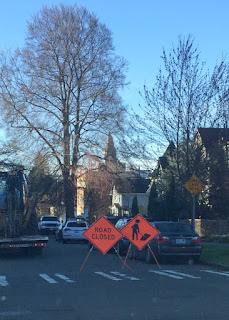 Alex and I attended the elementary school fundraising auction over the weekend.  Alex bid on a restaurant gift certificate because he's been wanting to treat his hardworking team at work to a nice dinner.  He missed a few crucial details before he bid and won, though -- namely that the certificate was for $200 worth of bagels. That's going to be one weird team dinner. 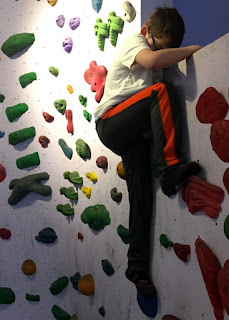 I took Coco and Lucien to the Seattle Bouldering Project while Alex was in Mexico for work last week.  I love bouldering, especially at this point in time.  When I'm hanging high on a wall by only my fingernails, all I can think about is how to keep hanging on.  I can't think about the words I'm using for the Paris book, and how most of the words I'm using are stupid words and I need to find good words. Bouldering is a reprieve from crippling self-doubt.

I may love the singular focus that comes with bouldering but my kids were less enthused. Within an hour they could not feel their arms nor legs so laid in whimpering little kid puddles on the mats and begged to go home.  Seattle climbers are a very supportive lot; they high-fived me and said, "Nicely done, Mom, you got 'em!"

We're going back whenever the kids get uppity.  You giving me lip?  GET ON THE WALL. 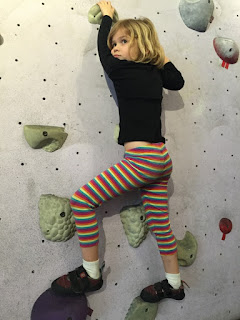 We took another trip in the RV before Al left for Mexico.  Taking off in an RV is more work than it sounds because you have to empty the RV when you're not using it and refill it when you're ready to take off again. You can't leave food in there to rot, can't leave linens in there to get damp in our wet Seattle winter weather.  It's like packing a tiny home each and every time so something is always inevitably forgotten. Last time it was ketchup and eggs.  This time it was butter and a pillow. 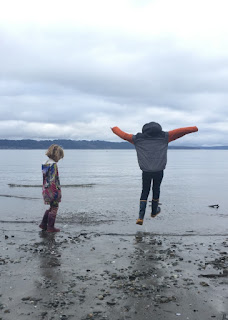 We also forgot to buy firewood.  Other campers' fires dotted the campground as we attempted to make our fire with a roll of toilet paper, small sticks and some damp leaves.  It was brief, brilliant, and smoky.

There are three types of RVers we've encountered so far.  The most common type is the retired couple.  Then there are young families like ours.  The third is more difficult to categorize in a definitive way -- they're the kind that shuffle around the campsite in dirty bathrobes and slippers and don't make eye contact. I'm not sure of their age or family situation.  It's anyone's guess what they're all about yet they are definitely my favorite. 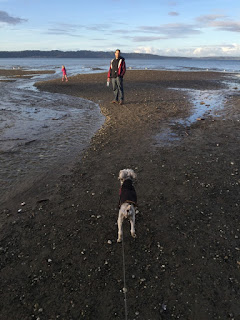 and old man schnauzer went on a hike

Lucien recently told me about a girl he has a crush on at school.  He was invited to go to a movie with her family and while we waited for her dad to come pick him up, Lucien said, "I really hope I impress her."  I worried about what "impressing her" might entail (probably farting on cue) so I asked cautiously, "Hey Loosh....how do you think you should communicate with a girl in order to "impress" her?"  He thought a minute, pointed at me, winked and said, "I'm gonna speak to her in German."

It's worth a shot, I guess.  Better than farting.  If it doesn't impress her it will at least befuddle her and that's worth some laughs.  So go on, baby, sprechen sie deutsch.  And good luck.

Coco just ran into the kitchen and announced, "Donald Trump just bit me."  Frankly, I wouldn't put it past him.