It's a trilogy.  Part One of Mexico City is here, Part Two here.

Did I get lost in Mexico City again?  Yes, I did.  Did I text our driver, Julio, with a panicked, "I'm not sure where you are or where I am, help me" message?  Yes, it's true.  Did Coco throw up in the car again?  Thank the Aztec Gods, no.

Coco throwing up in the car, horrifying as it was, was a real turning point in my relationship with Julio.  Once you've dealt with that together, the ice is most definitely broken.  Once you've made horrified faces at each other, flapped your arms like panicked birds together, and tripped over flustered words in your respective languages together, you're bonded for life.

The next morning, when we once again braved the car, I brought plastic bags. I put my hand up, did not let Julio move the car an inch until the kids had bags held up to their mouths.  I yelled, "Bag!" Julio laughed so hard at that, I at first thought he was crying because we were in his car again.

Julio and I began yelling in unison, "Bag! Bag! Bag!" every day after that, especially when traffic got hairy and Julio got swervy.  I stockpiled plastic grocery bags, always had at least a dozen in my purse. 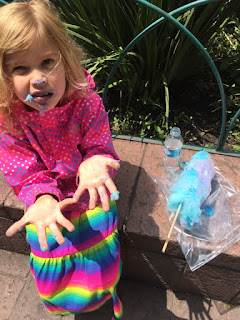 
The kids and I visited the Anthropology Museum, a museum that boasts being the best anthropology museum in the world.  What we learned from our visit is humans are fascinating, and also pretty creepy and quite mean. 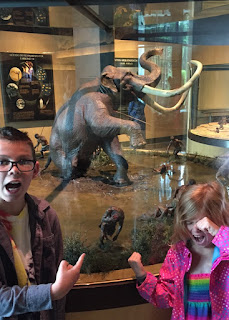 
My favorite part of the museum was the Stone of the Sun.  It was huge, impressive, terrifying with its center ancient god and his tongue shaped like a dagger.  From what I understood, gladiators fought on the Stone of the Sun and the loser was then sacrificed upon it.

And the laughs keep coming at the Museum of Anthropology! 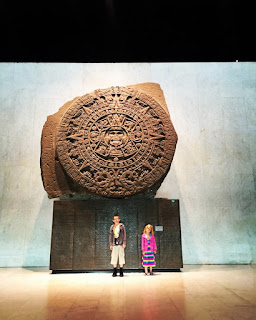 I hoped to find a replica of the Stone of the Sun in the gift shop.  I found one, all right, but it was a large-ish solid slab of stone and weighed about 20 pounds.  I debated for quite some time; we still had a couple sights to see that day before Julio picked us up and how was I going to get to them, let alone enjoy them, carrying a large rock?

I had put the heavy Stone of the Sun back down and resigned myself to the smaller six-inch version made of lightweight plaster when Lucien piped up: "Mom, YOLO. Get the one you want, get the big one, we can do it." I love that kid; he often provides clarity when I'm getting bogged down in stupid, worthless worry.  He was absolutely right.  I bought the big one.

Lucien volunteered to carry the stand, which was almost as heavy as the stone itself.  We dragged our bags down the street and through the park, stopping to rest every few minutes for a breather because sure, YOLO, but also, we can't feel our arms anymore.

I enjoy these next two pictures because they're a real slice of life and a great illustration of how light-as-a-feather moods can turn on a dime.  My kids began fighting soon after we arrived at the castle for reasons that were never quite clear. Take a look at these two pictures (there are two because the kids refused to stand next to each other by that time) and take a guess -- who was bugging who just for giggles?  Who was pushing every button they could think of just to upset the other person? And who was being very, very effective in these efforts? 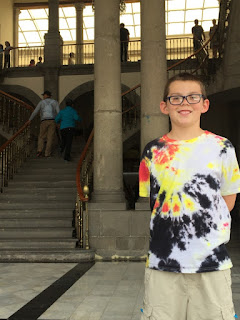 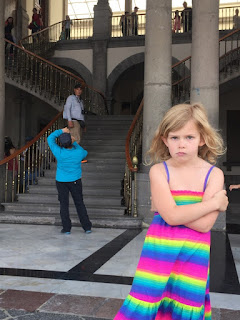 Don't feel too badly for her.  The expressions are just as often reversed with these two.


An hour outside Mexico City lies Teotihuacan, the ancient village and site of many pyramids. It was my favorite place we visited, too bad I'm cramming it in here at the end where it won't be given the time and energy it deserves because I'm getting sick of writing about this trip and would like to wrap it up.

Teotihuacan was definitely the kids' favorite. We climbed the biggest pyramid, the Pyramid of the Sun, early in the morning before the crowds arrived.  It was hard work on the legs, and a little tense (for the mom, anyway) given the steep and seemingly endless stairs.  I pretty much just yelled, "Be careful!" constantly. 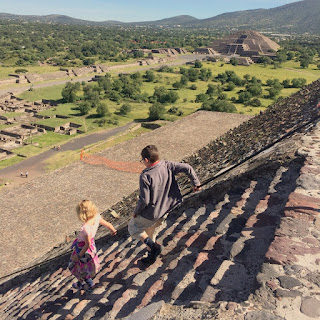 Later in the day, after a lot of sun and heat, we may have gotten delirious at Teotihuacan.  This is us touring the ruins of a noble's house -- 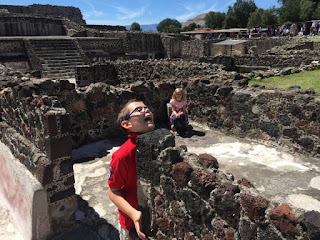 Coco is pretending to go to the bathroom on that rock because she thought it looked like a toilet. Lucien is doing God only knows what. 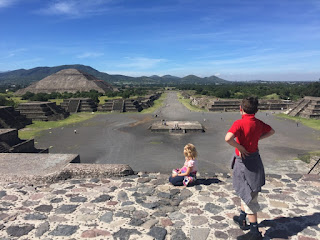 We also climbed to the top of the smaller pyramid, the Pyramid of the Moon, where Lucien once again began complaining about his old man aches and pains 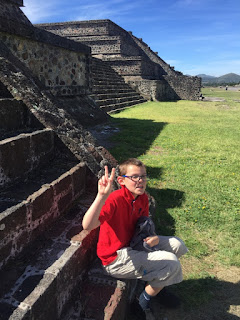 Lucien declaring, "I'm going to sit on this old crap now, I'm sick of walking around." 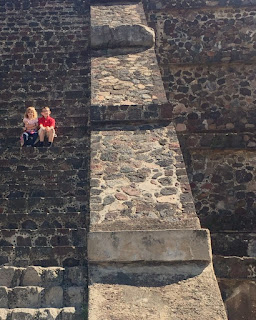 just chillin' on a pyramid

The last noteworthy tourist attraction I'd like to mention is Frida Kahlo's house, La Casa Azul.  Frida grew up in the house and later lived there with her husband, artist Diego Rivera. 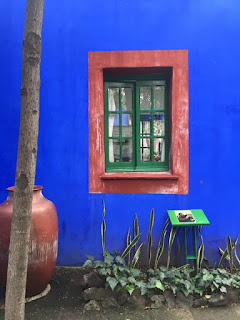 La Casa Azul is a very special place. It is both a museum showcasing Frida's art and her home, which introduces you to the more intimate parts of her life -- her physical ailments, her clothing, her complicated relationship with Diego, her various braces for what she called, "a body less than perfect." 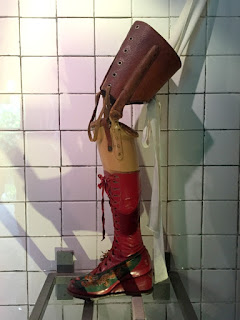 Everything in Frida's studio is where she left it when she died, per Diego's orders.  Their personal artifacts are still scattered throughout the house. It feels like Frida and Diego are still living there, like they've just stepped out for a moment and we should make ourselves at home while waiting for their return. 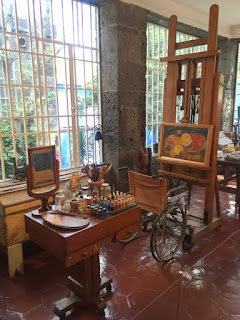 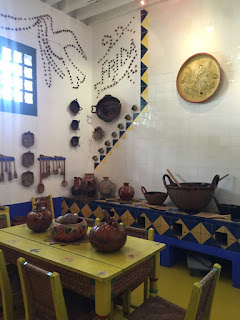 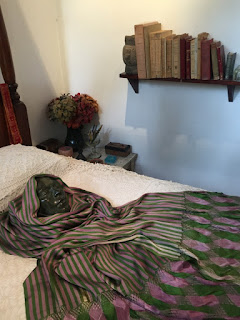 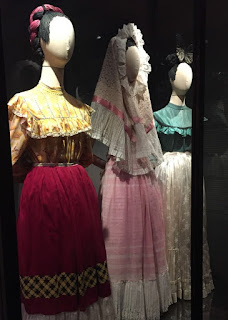 Strolling around the charming neighborhood of Coyoacan

I just noticed there is another goddamn Sanborns behind them in this picture
Should I stand in front of it and text Julio in a panic for old time's sake?

After Frida's house, we loaded up on souvenirs at the stalls of the Coyoacan mercado.  I bought a couple handmade Dia de los Muertos figures from a very silent man.  It took him half an hour to wrap each one; they were so fragile, there was much concern they would not make it home in one piece.

(Spoiler: they didn't.  They arrived home in many pieces.  I spent hours gluing their tiny slender fingers back on with a pair of tweezers and a q-tip full of super glue.  They next day the dude fell over and lost an entire arm in several places.  It could be a losing battle.) 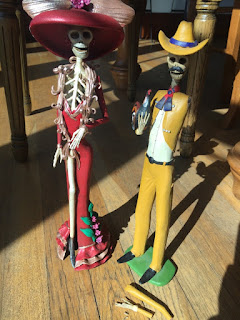 keep your parts on, people

Julio drove us to the airport our final morning and hugged us all twice.  He even looked a little emotional as he ruffled the kids' hair a final time, winked at me and yelled, "Bag!"  I like to believe Julio came to love us but I didn't ask him outright. 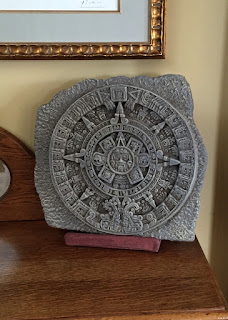 The Loosh was right.
YOLO.
I'm happy when I see it everyday.

So....now for this.  Our trip to Mexico City wasn't exactly a whim; Alex and I are in active talks with his employer about a temporary move to Mexico City, just for a little bit.  It wouldn't be a long bit, not like a Paris-three-year bit. It would be maybe six months, maybe a little more.

Our trip to Mexico City was a reconnaissance mission.  Could the kids and I live there happily while Alex hammers out what he must do for work?  I think we can.  The city is nutballs but we love Mexico.  How can you not love Mexico??  They put black sauce in their beers to make them spicy, you guys! 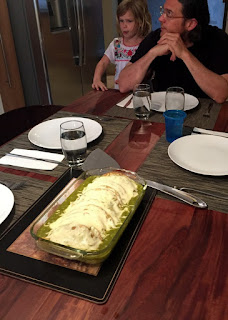 plus, delicious enchiladas verdes
(we miss you, Rosa)