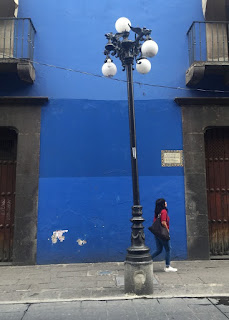 A large percentage of life in Mexico City involves sitting in traffic.  If you look at a map, it looks like a short distance from Point A to Point B but don't get optimistic about it -- you're still going to sit in bumper-to-bumper traffic for over an hour and ultimately wish you'd never heard of Point B.

There are tricks for avoiding the heaviest traffic, such as driving only between midnight and dawn.  Those are not the friendliest tourist hours, though, so instead Julio and I just said, "mucho trafico" back and forth to each other for long periods of time while staring at some guy's bumper. At least I learned a little Spanish.

A couple days after our arrival in Mexico, we went to Puebla, a city that should take two hours of driving from Mexico City but took us three-and-a-half.  Mucho trafico. 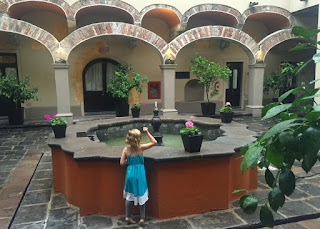 We were in Puebla as guests of one of Alex's co-workers, who grew up there.  The co-worker, whom I'll call Luis, and his wife introduced me to the cubano in Puebla.  A cubano is a beer poured into a glass containing some thick-ish black sauce at the bottom.  I was suspicious, too, until I tried it, but now agree with Mexico that beer should be spicy.

I mentioned the beer first.  That probably says a lot about me.  There are many other fascinating things in the Puebla area besides spicy beer, though perhaps they're not as life-changing -- 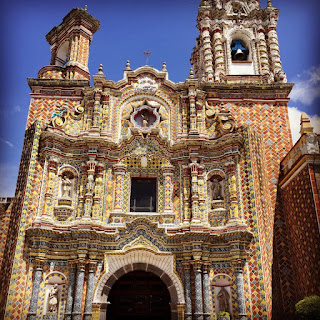 There are gorgeous churches 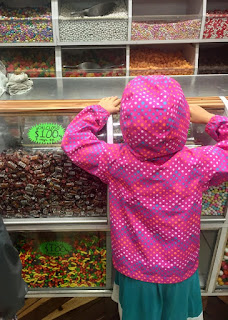 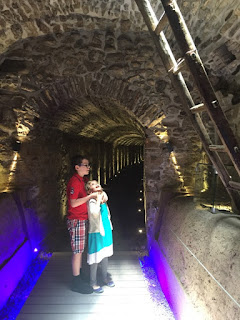 and "mystery tunnels" that lie underneath the city 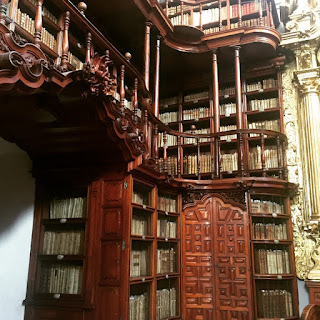 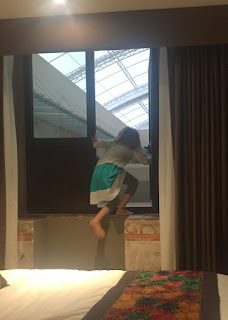 and our hotel, which was a former convent and had a strange window/door thing
Coco claimed it as her own private entrance
and used it often to dance outside the room 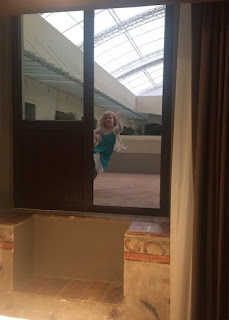 Luis drove us to the nearby town of Cholula.  Cholula's defining feature is a huge hidden pyramid. After the conquering Spanish took control of the area, they covered all the pyramids with dirt and built Spanish churches on top of them. That's really rubbing it in, kind of a dick move there, Spanish. 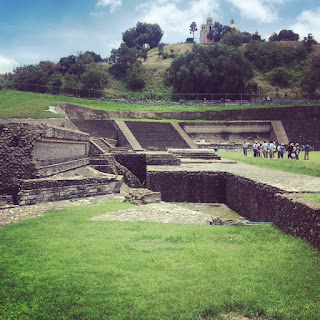 The pyramid at Cholula, the largest pyramid in the world,
is partially uncovered
but still mostly covered
by grass, trees, and a dick move church

I was intrigued by the site but, thankfully, did not understand how one accesses the area until we were already in the thick of it.  If I had known, I would not have gone.

I would have been OK, somewhat, if there had been some breathing room but there are lots of people in front of you, lots of people behind you, all moving very slowly.  I'm a claustrophobe, as I've mentioned before, and being in that tunnel with no visible exit in either direction and no possibility of moving faster and surrounded by lots of people may or may not have pushed me to the brink of socially acceptable behavior.

I couldn't speak.  We had a tour guide with us in the tunnel who spoke Spanish.  After every sentence, Alex or Luis would translate for me but I couldn't respond.  I heard very little besides my internal voice screaming, "We're all gonna die!  This is our tomb!" 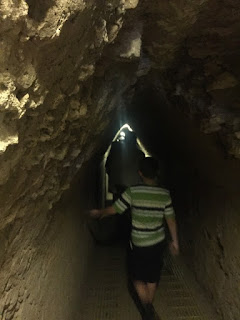 Welcome to my hell

It took a full twenty minutes to clear the tunnels.  Those were twenty long minutes.  The only thing that kept my rising panic at bay was my faithful iPhone.  I began scrolling through pictures I'd taken so far in Mexico.  As long as I was staring at something else, and not looking around assessing the reality of my situation, I could avoid hyperventilation, clawing a path through strangers, passing out, screaming, whatever.

Alex didn't understand what was going on with me and said at one point, "I cannot believe you're on your phone right now" to which I replied through clenched teeth, "Trust me, you want me on my goddamn phone right now or else I'm going to embarrass us all very, very badly."  He got the hint, even pointed out a few of his favorite pics on my sanity-saving tiny phone screen.

Once we were through the tunnels, I once again loved the idea of visiting the pyramid at Cholula because the place is really, really cool. 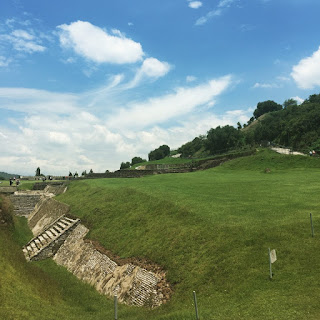 I like you, hidden pyramid
but I never again want to walk through you

It was Cholula where we discovered Lucien is a crabby old man trapped in a young boy's body. There was a lot of walking involved up and down the pyramid and at first it was a few quiet, "Gosh, I'm tired"s but soon escalated into full blown "Ow, my hip, my hip!" as he clutched various body parts and hobbled around. 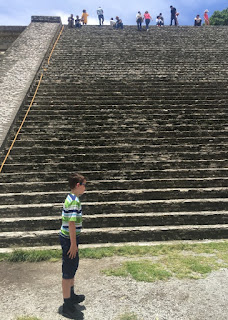 Here he is bemoaning the fact his "lower back ain't what it used to be."

We were welcomed warmly back to Mexico City by Julio and Rosa.  As perfect and helpful as they were during our stay, I found it awkward to have people in my employ hanging around the house.  When Julio was not driving us or attending to car-related issues, he hung out in a little room off the kitchen where he read the paper or watched TV. I felt guilty every time he was in the little room because I worried I wasn't using his time and talents effectively.  If it seemed he'd been sitting in the little room a long time, I began flipping through my Mexico City travel books thinking, "I should find someplace to go right now so Julio isn't bored."

One day, out of Julio guilt, we went to Chapultepec Park, a huge park in the center of town that houses museums and a castle, all of which were closed the day I chose to go.  The kids and I instead played Pokemon Go in the park (trust it, we weren't the only ones) and rented a paddle boat to take for a spin in the pond.

Paddle boats kind of suck.  It's a lot of work for not a lot of excitement.  Lucien and I could no longer feel our legs afterwards because you work damn hard on paddle boats, especially when there's a third passenger whose short legs and tiny feet can't reach the pedals so is no help at all. 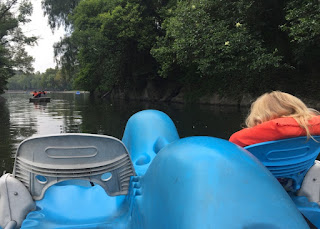 The next day I asked Julio to drive us to Luis's wife's apartment.  We were going to meet up with her and her kids to take a tour of the canals in the Xochimilco area.  Traffic was particularly bad that day so there was a lot of darting on Julio's part.  He got us to her apartment complex in time but was punished for his effective driving when Coco threw up in the back of the car.  The motion sickness runs strong in that one.

As Julio and I bailed from the car and flailed in a parking lot looking for plastic bags and paper towels, she threw up again.  We never made it to Xochimilco.  We instead went home with all the windows rolled down.  Julio drove so slowly, trying so hard not to upset her sensitive equilibrium yet again, that people actually honked at us.  You know you're doing something way wrong if they're honking at you.

Back at home, the kids and I hugged each other and played video games on the Xbox while Julio cleaned up the car. I begged him to let me do it, emphatically and profusely, but he waved me away and said no, no, it's no problem, it's ok.

At least he wasn't bored.


I told you Julio really earned his money that week, and I did not lie.
MJ
Posted by MJ at 1:12 PM