I turned older recently. It tends to happen once a year. This year I celebrated in one of my happiest of places because I was on the ROAD. 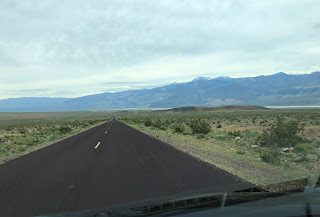 You know it's been a tough year for all of us, posse, so you know how badly I needed to be out there with my kids again, driving through a whole lot of wide open expanses with a whole lot of nothing stretched before me on long, long roads.

I rented a car for this trip. Alex helped since he has a membership for rental cars given all his travels. We picked the car up together and as soon as we hopped in, we were like, "Is this what cars are like now?" and then proceeded to push every button like kids with a new toy. I'm surprised we didn't break anything.

It's been a long time since I've had a new car. My 2006 model is still kicking it but has most definitely seen better days. I love my car and don't want to part with it yet but I'll admit -- pretty thrilling to have an affair with a hotter younger model for a couple weeks. 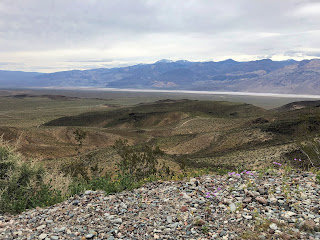 My road trips are ambitious. It's the norm for us to pull 14-hour days in the car as we get to where we're going. The kids and I have a system that has been refined over many years of doing these trips -- an intricate schedule of bathroom breaks and snack bags and surprise bags and road trip games and countdowns and music playlists to fit each landscape. We know what to expect in a car and it doesn't take long to get back into the road trip frame of mind.

Climbing into a car together at dawn to begin another adventure is like climbing into an old friend. That sounded creepy but I meant it to feel cozy.

There was one feature I found jarring on my hot young rental car as I cruised along. Every few hours or so, the dashboard would light up and a message would flash in an annoying way: "Would you like to take a break?" And I would get kind of offended and say aloud, "Take a break? Take a break? Have you ever met me, car? God you don't know me at all."

My old car would never ask me such a stupid question. She knows breaks are for wimps and road trips are for driving.

This trip was all about California. Our first day ended in Eureka. I love Northern California and all the many, many quirky roadside attractions you can search out until your kids start getting crabby and telling you they're sick of them and wish we could just go to the hotel. Lame! 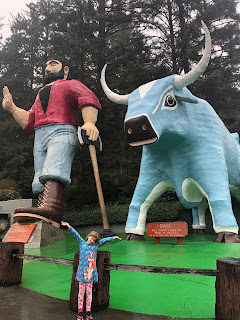 Giant Paul Bunyan and Babe the Blue Ox
Babe was anatomically correct.
Lucien jumped out of the car and yelled, "Mom, look at the balls on that bull!" 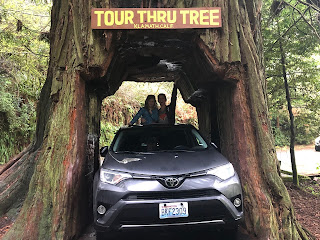 For the tour-thru tree, my rental car's dashboard
flashed the message,
"Get me out of here I am claustrophobic"
We're really getting to know each other now. 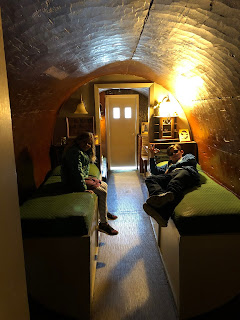 A house carved out of a giant Redwood tree 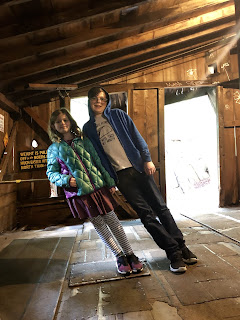 The Gravity House at Confusion Hill 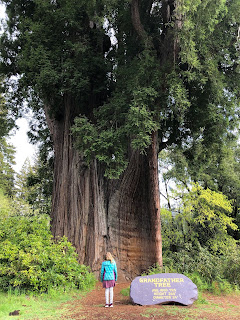 We ate dinner our second night at a Cheesecake Factory in San Jose. It is not an experience I would recommend. My first question, which has been on my mind for a long time: why is The Cheesecake Factory decorated in a faux Egyptian theme? Shouldn't it be more of an industrial factory-type thing? What is it about the words "cheesecake" and/or "factory" that made someone snap their fingers and say "Cleopatra!" This is just one of many things that bother me about that restaurant.

Our table was wedged between two tables of men at The Cheesecake Factory.  The men on my left were complaining about the women in Silicon Valley. One said, "If you're not payin' 'em, ignore 'em, because at least the ones you're paying will do what you say." I had to resist throwing my bowl of overpriced pasta primavera at his head because it is my firm belief it is better for a misogynist to wear a bowl of pasta than not wear a bowl of pasta.

I was hoping the kids had not overheard but Lucien looked up from his book and said, "Mom, I think that guy's single for a reason."

The conversation of the men to my right was slightly less offensive. They were discussing how one of them had drunkenly killed a chipmunk one time. I don't think I want to be friends with either table but at least those to my right seemed sad about what they were saying. 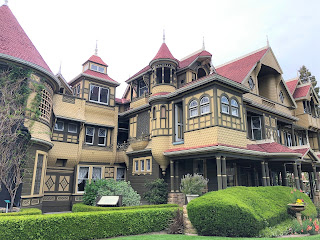 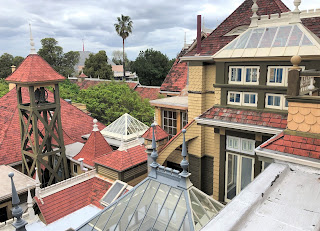 Sarah Winchester, an eccentric lady, understatement, was told by her medium the only way to keep the ghosts at bay was to build on the house continually, 24-hrs a day, which she did for over 30 years. There were no blueprints, no plans, she would just tell the workers to tack on this room or that room as it went along. It is an immense labyrinth of 170 rooms with no rhyme nor reason as to its layout. We were warned by our guide not to leave the group, that if we wandered off it would be very difficult for us to find our way out. I bet half the ghosts in that house are just former tour participants trying to find the bathroom.

The Winchester House was as beautiful and creepy as I'd hoped. 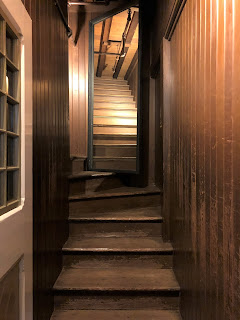 staircases leading straight up into the ceiling 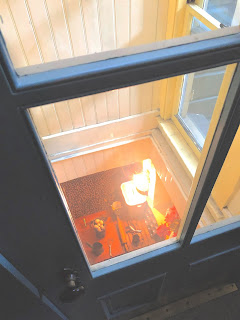 The door in Sarah's seance room.
It opens onto nothing
but is a handy shortcut
if you'd suddenly like to be down in the servants' kitchen sink. 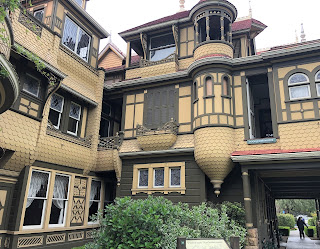 Another "door to nowhere" up on the second floor.
If you open that one and aren't paying attention,
you're face first in the garden now.

I must add the tour doesn't begin in the best way. The guide says "We're about to climb a staircase with seven switchbacks and a hundred low-rise stairs, all just to take us nine feet above to the second floor." So you're crisscrossing back and forth across the narrow low-rise stair switchbacks, giggling with your fellow tourmates like, "Oh gosh, Sarah, you were so weird!"

But then you get to the top of the stairs and the guide says, "Those are not the original stairs. Sarah had the normal stairs ripped out and those low-rise stairs installed towards the end of her life because she could barely move due to her arthritis."

And then you feel terribly guilty, like a total jerk, for giggling and calling an old lady weird who sufferred crippling arthritis and was just trying to get into her big dang weird house. Hang your head in shame, tour participant, in shame.

After San Jose we headed over to Highway 1 to experience the winding and wild beauty of Big Sur.  This is the morning I jumped on the kids to wake them up and said, "Guys, time for Day Three!" and Lucien groaned and said, "Jesus, Mom, it feels like Day 39." Maybe that's how it feels to read about it, too.