Don't stand so close to me, MJ 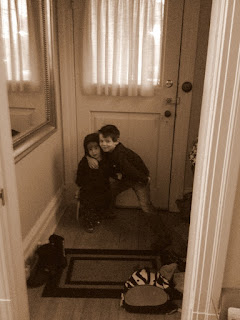 Lucien is trying to convince me today is a "special" day at Kindergarten so he gets to go to school naked.  He's pretty adamant about it.  I don't want to think too hard about what kind of person wants to show up in a public place naked because I have to raise that kind of person for a long time yet.

Now when I get on an elevator in the U.S, I'm so used to getting uncomfortably close to my fellow riders, I automatically gravitate to the nearest person and start poking them with my elbows.  Yesterday I got on an elevator and, not realizing it, stood right next to a dude.  He was visibly uncomfortable.  I attempted to ease his elevator anxiety (must be claustrophobia, I thought) by looking up at him and saying "howdy!" That did nothing to alleviate his elevator agony, now completely focused on the small smiley woman standing next to him.  He really hustled off the elevator at his floor.

I realized I'd made an elevator gaff so studied the elevator dynamics closely as I rode the rest of the way to the 24th floor.  Here are the rules -- if you're the first one in the elevator, go stand in a corner.  If you're second, go stand in the other corner.  Third person, pick one of the remaining corners but don't block the buttons unless you're willing to be on button-pressing duty; otherwise someone will brush against you uncomfortably on the way to their button.  Fourth person, go to remaining corner.  Fifth person, stand in the middle as awkwardly as possible.  If any more people than that get on the elevator, the tension becomes palpable.

You should only look at the ceiling, the floor, or your smartphone when riding the elevator.  If there's a dog or small child on the elevator, you should look at them with a bemused expression on your face, even if it's forced.  For the love of God, don't look anyone in the eye.  If you don't obey all these elevator rules, you are a pervert.

OK, I think I got it.  Just give me some time to get used to it again.  I swear I'm not a pervert.  I just lived in Paris for a few years and their ways rubbed off on me, literally, in their elevators.

Other than that, let's see what else is going on... I almost got a parking ticket outside FedEx Kinkos, which was pretty exciting.  The guy only let me off because I came flying across the street with arms waving and put some money in the pay thing.   He shook a pointy finger at me and said, "No one parks for free!  No one parks for free!" and I replied, "Some of us try!  Some of us try!"

Lucien has been selected randomly by Seattle Public Schools to be a participant in a physical fitness survey.  He has to wear a pedometer to count his steps for the next week.  So I was wondering, can pedometers explode?  Because this kid moves in ways this pedometer has likely never seen before.  I don't know how, but The Loosh even manages to run while sitting down.

He's going to skew the data.  SPS is going to be scratching their heads like, "How come kids are still fat when they're taking a gazillion steps before 9:00 a.m.?"

Good luck out there today everybody,
MJ
Posted by MJ at 10:12 AM