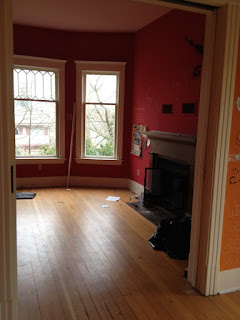 Someone wrote "I love cock" in the dirt on the back of my car.  I'm not sure how long it's been there.  I wonder if it was there when I pulled up in front of the elementary school not long ago.  I got out of the car with a handful of balloons and waved at everybody.  If it was written there then, chances are slim no one noticed my grand arrival in The Cockmobile.


In further "universe out to get me" news, The Goddamn House purchase has fallen apart.  The ex-wife, who needed to sign a simple little one-sentence addendum with no downside for her, has refused to sign.  The moment I learned she wouldn't cooperate, my heart fell out and broke on the sidewalk.  Even worse, it broke on the sidewalk in front of The Goddamn House, where I just happened to be standing when our warrior real estate agent called with the news.

But it ain't over.  We've still got some fight in us and a few more ideas.  Our warrior real estate agent, Susan, says "it isn't over until we give up" and we are not giving up, a fact that has earned us both admiration and threats of involuntary commitment from our loved ones. 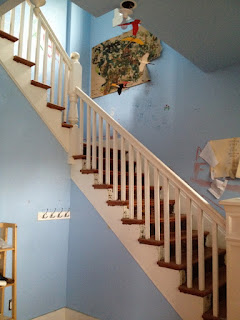 One idea that holds some promise is "Occupy Goddamn House" -- we could get pretty comfy in there with a generator, a couple sleeping bags, and some buckets.  It would be like camping, but illegal and surrounded by garbage and graffiti.  The other option is flying down to Texas to seduce the ex-wife, who is a lesbian (hence the "ex" part, I'm guessing).  Neighbors who know her say she is a "difficult, mean" woman.  I can't wait to sex up that scary gal.

It's probably best to leave The Cockmobile at home for that particular mission.

There's some glorious graffiti in The Goddamn House -- 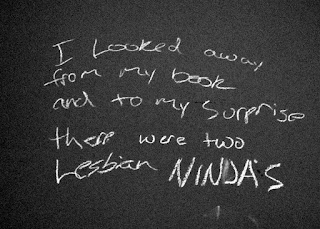 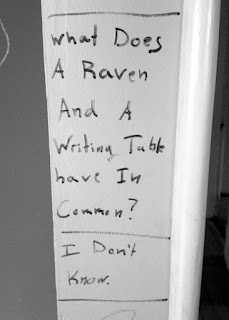 I turned to Seattle Mom at one point and said,  "Damn.  I just can't shake the feeling this is our house."  Then we both turned and saw this -- 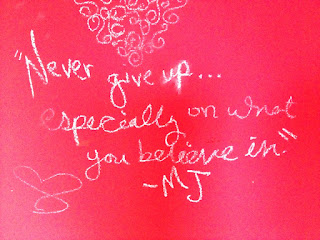 Admittedly, that's damn creepy.  But how can I stop pursuing this house when the house itself is egging me on with ghostly messages, apparently from myself?

Yes, the whole house situation has put me in a bit of a funk. Thankfully, The Loosh is still around to distract me.  Recently I told him he had to pick up his toys before he could turn on the television.  He didn't like the idea and grumbled and sulked on the couch for awhile before slowly beginning to put his toys away.  He mumbled things under his breath the entire time he cleaned -- my favorite was, "Well, I guess I'm not going to be a paleontologist anymore.  I'm going to be too busy being a picking up guy."

Thanks, angry son.  I really needed that laugh.

I'm going to be a little distant and distracted for awhile.  I'll still be around but my thoughts are decidedly elsewhere, mainly with our imminent homelessness and how to convince a mean Texas lesbian I'm irresistible.  So if I just suddenly trail off in the middle of a sentence it's because...

In it to win it, posse.
Cockmobile out,
MJ

P.S.  Has anyone else out there ever gone nuts over a piece of property?  Please?  Even if you haven't, just lie, and tell me an inspirational story that will make me believe in real estate miracles again.
Posted by MJ at 6:50 PM

Email ThisBlogThis!Share to TwitterShare to FacebookShare to Pinterest
Labels: real estate can blow me, The Cockmobile, the goddamn house