The Central District of the United States of Cold 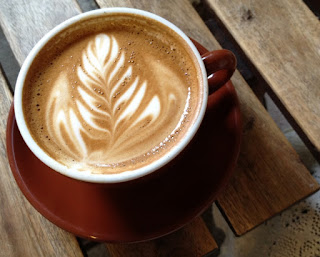 It's cold in Seattle today.  Our Tiny Cottage rental, for quirky old house reasons, doesn't have heat in the kitchen or bathroom.  It's not enjoyable to be in either of those rooms at present.  Tonight I prepared dinner wearing mittens and took an hour-long shower so hot it nearly melted my skin off; it was the only way to make the cold a blessed relief.

The kids aren't happy about the chilly situation, either.  Lucien got out of the bath tonight and stood shivering hard and wrapped in two towels.  As he attempted to gain control of his violently shaking body, he said, "I live in the United States of Cold."

Oh God, my blog is turning into a list of things my kids say.  It's exactly what we feared. 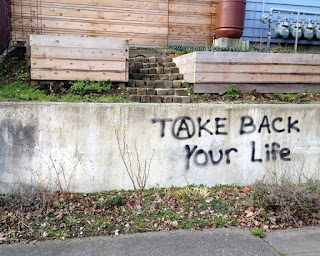 Now I want to talk about my neighborhood.  I think it's a sign of a great neighborhood when people are as likely to greet a neighbor with friendly words as they are the homeless man who regularly pushes a grocery cart down the middle of the street.

I love this neighborhood.  I love it for its proximity to downtown, for the diversity of its residents, the bright colors of its houses, and the deliciousness of its taco bus.  It's the C.D., baby -- The Central District -- all cozy and weird and occasionally urine-scented snuggled up next to downtown Seattle. 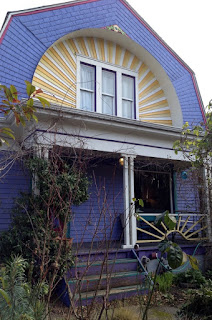 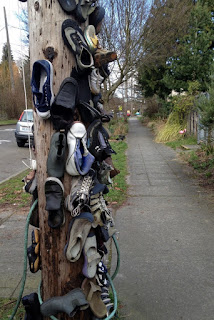 ...as do shoe-covered poles
The Central District is a delightful mix of money and squalor.  Beautifully restored houses sit next to rundown saggy bungalows, and coffee shops and kid boutiques exist alongside shady looking establishments --  you couldn't pay me a million tacos to enter some of those places. 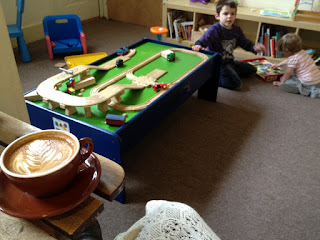 Coffee shops with toys in the back.  God Bless the United States of Cold.
There are certainly some rough edges in the C.D.  As I've mentioned before, there are issues with racial tension and dog poop.  There's crime, as evidenced by my friends who've had their car stolen five bazillion times.  The car has always been found and returned but five seconds later they look out the window and dammit....gone again.   It's no rosy suburb, that's for sure, but I'm pretty sure it's more interesting.  It's just all us families and hipsters and criminals trying to get along.

One of the gems of the C.D. is the Central Cinema theater.  At Central Cinema, you can watch movies from the comfort of a booth while a server brings you food and beer.  I met up with Seattle Dad at Central Cinema Thursday for "Cartoon Happy Hour."  This is an inspired event where they play free cartoons for the kids and serve delicious cold brews for the adults. 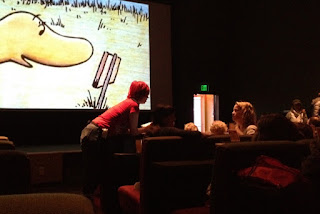 Our server had bright pink hair.  Not unheard of in the C.D.
(Central Cinema also hosts events such as sing-a-longs, quote-a-longs, and something called "hecklevision.")
For Cartoon Happy Hour, Seattle Dad and I shared a booth with our combined five children.  We also shared a pitcher of Mannys Pale Ale and a few laughs over Scooby-Doo.  Scooby-dooby-doo! Ruh-roh! Hilarious. 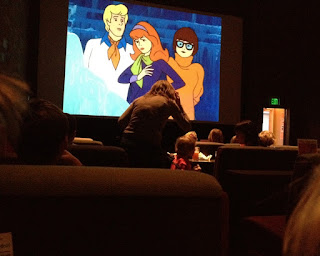 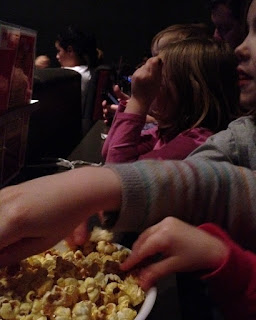 One little boy in front of us couldn't stay in his seat for all the popcorn in the world.  His parents would sit him in his seat and -- thunk -- that kid would go straight over sideways onto the floor.  Sit up -- thunk -- sit up -- thunk.  It would have been downright distracting if my own child hadn't been trying to drink milk through a straw stuck up his nose. 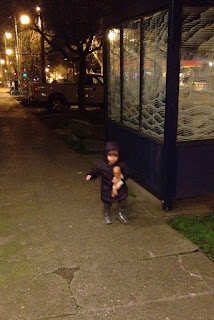 Coco staggering the long walk home, drunk on milk and cartoons.
Even if we don't get The Goddamn House, we will not leave the C.D.   This neighborhood just feels right.   We prefer neighborhoods (and people) with a few rough edges -- it really gives you something to hold onto.


Here's a song I've been listening to ad nauseum.  During these times of house uncertainty, it's cheered me immensely.  It's just about the most charming little thing I've heard.

This is a live version at a house party, so it's not flawless sound-wise, but these people are so cute it makes up for it.  I especially like the party-goer who says, "Watch those beers, I bet they'll fall" at :36.


Central District, I belong with you, you belong with me, you're my sweetheart.  Let's do this, dammit,
MJ
Posted by MJ at 10:17 PM