Am I doing better this time? 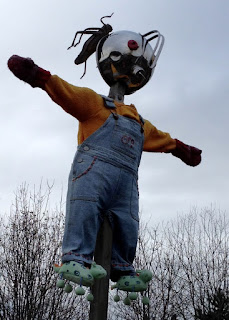 I got radio silence on that last post, except for three of my most loyal commenters, Duchesse, Debbie, and Bec, who are quickly turning the comments section into social hour.  Ladies, comments sections are not for fun-having, gossiping, or bonding.  They're for MJ idolatry, of which there wasn't much last time, so... carry on with whatever you three are doing in there, I guess.

(They can't all be winners, folks.)

I dropped Coco off at her preschool the other day.  One of the other mothers told me that when her young son overheard her talking about Coco at their home, he looked up at her and said, "Coco?  What a delicious name!"

Coco's delicious, all right.  She's also still refusing to talk.  Or, more accurately, she thinks she's talking, but we can only stare at her with our heads cocked to the side, like, "What the.....is that German?"

What is it with these kids of mine, who have both refused to do anything the way they were supposed to, in the timeframe in which they were supposed to do it?  And while I'm asking rhetorical questions, is it a good thing when someone asks you, "Awww, did she dress herself today?" but you dressed her? 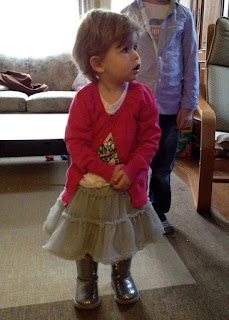 All me
While I'm talking about the kids, I want to mention Lucien and his happiness.  Many people don't understand why I'm not depressed as hell to be done with Paris, but our boy is a huge reason.  Our Paris school was not a good fit for the loud Looshman.  What used to be a tight-lipped, sullen kid after school, a boy who used to regularly say things like, "I'm the bad kid," has turned into a smiling, happy kid who tells me about his day when he gets off the bus.  And now he says things like, "I'm not the bad kid anymore!  Jason is!"

I recently met with his teacher to discuss his progress in the classroom.  He's behind the other kids in reading and math because they hadn't done that stuff yet in his Paris school.  His teacher says Lucien is learning quickly, but will catch up even faster if he "stops trying to entertain the class like a pint-sized Robin Williams all the time."

They have "self-manager" badges in Lucien's kindergarten class.  The kids who have their badges enjoy greater freedoms in the classroom and on the playground. The kids who lose their badges pretty much have to follow the teacher around like ducklings and ask permission to breathe.

We have fingers crossed that Lucien, just once, will hang onto his badge all week.  He's come pretty close a couple times -- one week he made it all the way to Friday morning.  We were fattening the calf and preparing the celebratory feast when he lost it in the eleventh hour -- to kung fu with Finn during story time.

Every day when Lucien gets off the bus, I ask, "Hey, buddy, still got your badge?"  Many times I've received the reply, "Nope, I lost that thing in like five minutes."

I went out to dinner with Cavanaugh again last night, this time to Terra Plata on Capitol Hill.  I'm going to continue going out to eat with Cavanaugh because he really knows his food, and makes me try stuff I don't want to eat, such as crispy fried Brussels sprouts with maple and rosemary.  I hate Brussels sprouts but I'll be damned if Cavanaugh wasn't right again -- they were nasty veggie divine. 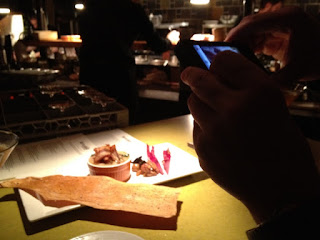 Cavanaugh takes pictures of all his food.  Downright embarrassing.
When friends know you have a blog, sometimes they get demanding.  Cavanaugh said something witty at dinner, then pointed his pointy finger at me and said, "write that down."  I said, "Oh no, Cavanaugh... you're not becoming one of those 'write that down' friends, are you?"  And he said, "Yes, I am, and you can quote me on that."

I got my hair cut over the weekend and it made me wonder why they offer you something to drink at salons.  You're only able to sip coffee for two seconds before they put the cape thing around your neck.  Then your arms are under the cape, so to take a drink you must first ask permission, then free your arms from underneath, which dusts up all the hair, which puts hair in your coffee, which is cold by then anyway.

Every single time I've accepted a cup of salon coffee, I've initially thought, "mmm, sounds delicious," but that quickly turned to "this is ridiculous, I really didn't need anything to drink right now."  I'll never go down that dark path again.

So long, posse, hope this post was more agreeable to you.  If not, there's no hope, because I really did my best,
MJ

*Breaking News!  Tara has since commented on my last post, too.  Sure, it was just to join in on the social hour, but I'll take it.*
Posted by MJ at 9:22 PM