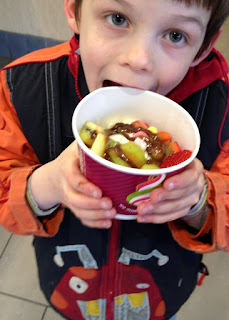 Lucien said he keeps losing his self-manager badge at school because "it's hard for me to follow the rules, Mom."  When I asked what the rules were, he said, "Don't run...don't show your butt... don't hit the kids... don't pee in your pants."  Sure hope he's losing his badge over the running one.

We were up in the Queen Anne Hill neighborhood last week.  Queen Anne is the neighborhood where you can buy a huge house with a view of the city and water, but only if you can also find ten million dollars stuffed in your couch cushions.

We went to a fantastic sandwich place up on Queen Anne.  It's a typical Seattle place because there isn't a garbage can -- you must choose between "recycle" and "compost."   Alex stood in front of those two bins for a full five minutes, looking back and forth between them, then staring down at the wad of gum in his hand.  "Hey M.J., can you compost gum?" he asked.  "Ummm...???" I replied. 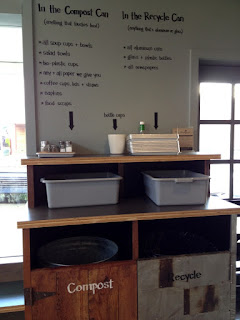 Alex went up to the front counter and asked the hippies if they had a garbage can for his gum.  They blinked at him like they'd never heard of a landfill before.  They finally ripped off a small piece of butcher paper in which to wrap his gum, so he could carry it out of the restaurant and dispose of it elsewhere.

Now don't get me wrong, I dig environmentalism.  I just don't dig places that make you put garbage in your purse and carry it around for the afternoon.

After finding an appropriate waste receptacle, we went to Kerry Park.  Alex was the only father at the playground intent on showing off his muscles.  He flexed a lot, and loudly demanded I feel his pecks.  I wonder what the really rich people thought when I squeezed Alex's boobies in front of the children. 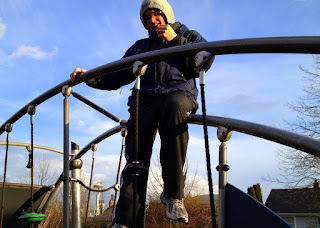 Is that a Space Needle back there next to your right leg or are you just happy to -- that makes no sense, forget it.
I left Al with his biceps and climbed up to Kerry Park viewpoint.  I've lived in Seattle almost fifteen years (minus a three-year hiatus in Paris), and this viewpoint has never failed to stir my soul.  There's no prettier combination than city, water, and mountains -- and that's not an opinion, folks, that's a cold, hard fact. 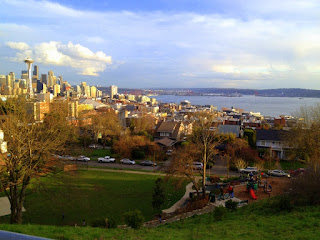 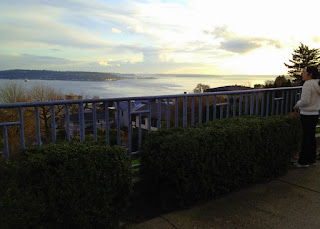 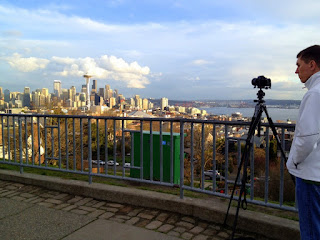 There are always photographers standing around Kerry Park viewpoint at sunrise and sunset, waiting for the right light so they can take the same photo a bazillion other photographers have taken.
I volunteered in Lucien's classroom not long ago.  I was a helper to the teacher for the science lesson on wood (from trees...stop being perverts, people).  I soon learned "being a helper" to the teacher meant she could really boss me the eff around.

The teacher gave us the lowdown on the lesson before the kids came in from recess.  Previous wood lessons have been on wood grain and the buoyancy of wood, but our lesson was going to be "how to change wood."  When she said "change," I said the first thing that came to mind (this is rarely a good idea)  -- I said, "Oh my God!  We're going to burn it?"  My palms grew sweaty as I imagined twenty-three kindergarteners with lit matches in their hands and scores to settle.

Teacher looked at me and said slowly, "Umm....no, we're going to sand it, like with sandpaper."  I was relieved, and agreed hers was a much better idea.  I don't think she's going to let me be helper ever again, which is fine because I can only take so much saying "please don't do that" to the kid trying to eat sanded wood particles off his desk before I go batshit crazy. 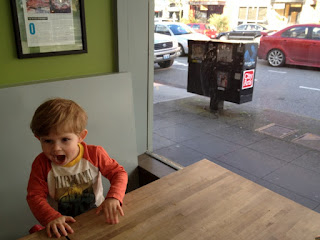 Lucien has decided Architect Neighbor must pay.  He has been feverishly drawing diagrams of how the attack is to unfold.  It's apparently set for 5:00 a.m. this Saturday and involves throwing rocks, which Lucien is collecting from around the neighborhood and storing in an empty egg carton.  Yikes. 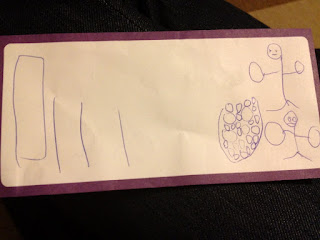 Holy sh*t, the kids have boulders. Or maybe large eggs?  Whatever -- run.
The Loosh has recruited kids from his class to take part in the attack.  He's explained the corn-killing offense, and told them if they want to take part, they have to write their names on slips of paper and put them in the "Attack Architect Neighbor" envelope.  Each day, he proudly shows me another little piece of paper with "Isabelle" or "Jonathan" scrawled across it.

His recruits have also started drawing pictures of kids throwing rocks at grown-ups, which I'm sure is somewhat alarming to his teacher.  She probably mutters, "The kids are planning something, the kids are planning something" in the break room, clutching her coffee mug and rocking maniacally back and forth until another teacher slips her a Valium and smooths her hair.

This is getting long.  I'll leave, but will be back, because there's more, there's always more.


Sleep with one eye open this weekend, Architect Neighbor!
MJ
Posted by MJ at 10:37 AM