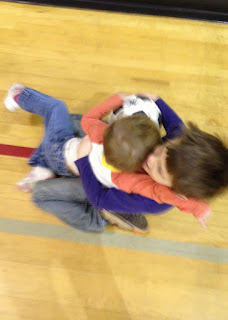 We are still hoping to own The Goddamn House someday, but have decided to buy everything else in the city in the meantime.  We're looking at both investment properties and back-up homes for The Goddamn House, so we've been studying listings, obsessing over houses, and writing offers all over the place.

One investment property has recently fallen through -- another short sale because we apparently hate ourselves -- and just last night we wrote an offer for an old Victorian that makes The Goddamn House look like pristine clean perfection.  There are currently 26 offers on the Victorian, so perhaps our only chance of getting it is to seduce the seller, which is a bank, so that may be uncomfortable.


I know what you're thinking -- "But MJ, with all that going on, how can you possibly have time to blog?"  The answer is I don't have time, and am risking my life crashing and burning around me as I write this.  Blogging is a compulsion, and it's sick.

Alex just emailed me one sentence: "We need normal lives."  Good point, my man.  Because besides the intense housing situation, there are other strange things afoot.  For instance, I spent my morning with a man in a storage facility in Bellevue, a man who bears an uncanny resemblance to Earnest Hemingway.  We were there to switch ownership of a storage unit from him to me.  It's a long story, so just take it at that.

I've met Hemingway Guy before;  he's always been a vibrant, energetic, funny man.  In fact, it was Hemingway Guy who spun his dance partner into the dessert table at the wedding we all attended in Provence a few years back.

But something's changed for Hemingway Guy, something I noticed right away at the Bellevue storage unit.  It appears H.G. is going senile  Or maybe he was drunk.  Or stoned.  He insisted my name was "Nikki" and shuffled slowly when he walked, usually in the wrong direction.  I had to jump in front of him a few times to turn him around.  When I asked if he'd brought the key for the storage unit, he said, "I think so," pulled handfuls of tiny keys from his jacket pockets and dumped them all on the front desk.  I said "Hmm....that's not good"  and the man behind the desk laughed into his hands.

We walked to the storage unit and tried all the tiny keys.  None of them worked.  Mr. Chuckles behind the front desk said he'd be happy to cut the lock off, but he was out of grinding discs, so could I come back tomorrow?  I'm almost certain I'll find Hemingway Guy still roaming the corridors when I return.

Another strange thing happened, too.  I dropped Seattle Mom and her three kids off at the train station early Saturday morning so they could catch a train to Portland.  I drove them in Seattle Mom's minivan, which used to be my minivan until she bought it from me when we moved to Paris but that's not important right now.

On my drive home from the train station, a man ran a red light at high speed -- really ran it, as my light had been green for a long time -- and came straight at me.  I saw Red Runner coming and braked as hard as my body could brake.  Red Runner careened past, the nose of Seattle Mom's van grazing the side of his car and peeling the trim off like one of them tasty Fruit by the Foot snacks.

Red Runner didn't stop, just took off into the still-dark early morning.  I pulled over to inspect the damage to Seattle Mom's van and was relieved to find there wasn't any, just some dark paint smudged on the front and Red Runner's trim curled up like a handlebar mustache in the lower grill.  I broke it off before driving home but in retrospect should have left it there because oh my gosh, so silly and curly!  While inspecting the car, several kind Seattleites ran over and congratulated me on my cheetah-like reflexes. 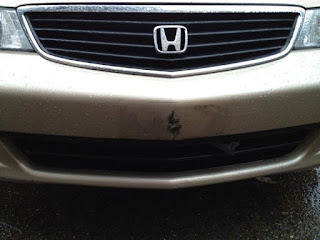 Nice try, Red Runner, you asshat
Alex and I took the kids to the YMCA when I got home because there's no better way to celebrate narrowly avoiding a major traffic accident than by running around an empty gymnasium with your family and yelling.

"Let's play dodgeball!" said Alex to the kids.  "It'll be me and your mother against you two."  Initially excited to play a new game with Mommy and Daddy, their enthusiasm evaporated when we fired those balls at their tiny bodies.  Al and I won in five seconds so the kids have to buy our beers this weekend. 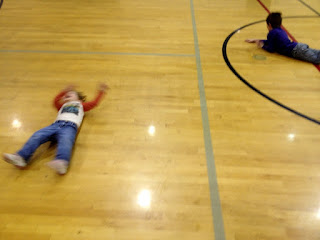 victory is sweet
We put the kids in the Y's childcare for a bit so we could exercise for real.  I headed for the elliptical machines, the cool ones with TVs attached to them.  Everyone around me watched news or sports but I threw caution to the wind -- let them judge me! -- and watched The Golden Girls.  It was the episode where Dorothy sleeps with her ex-husband, Stan, and then considers getting back together with him.  "Don't do it, Dorothy," I cried,  "He cheated on you with that bimbo Krissy, remember?"  The guy next to me startled a bit when I laughed out loud but I couldn't help myself -- that Sophia is such a pistol.

When I wandered over to visit Alex at the free weights, he made fun of me.  "The Golden Girls?  Really?  At the gym?"  I replied, "You can only dream of knowing friendship like theirs, Al,"  It was a total Golden Girls burn, and he felt it, and cried for hours.

Lucien's school had a multicultural night last week.  Each class did a song or dance from a fancy exotic culture somewhere in the world.  Lucien's class did a Japanese dance with fans, which we all agreed was culturally enlightening.  The audience was perplexed, however, when the next class did a Hank Williams song.  Ahh, yes... the mysterious, exotic culture of Hank. 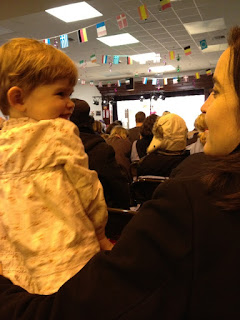 I so badly want to blog twice a week.  There are many things to put on the record, many tales I want to remember for all time.  But life is at goddamn warp speed over here suddenly -- calendar full, responsibilities numerous, homelessness imminent.  I will be here when I can, but for the foreseeable future I'm going to be a once-a-week blogger.  I never wanted to be that person, and therefore feel like a failure.

Email ThisBlogThis!Share to TwitterShare to FacebookShare to Pinterest
Labels: blogging, driving, fun to stay at the YMCA, Hemingway Guy, real estate can blow me, school, the goddamn house