And that's just Day One 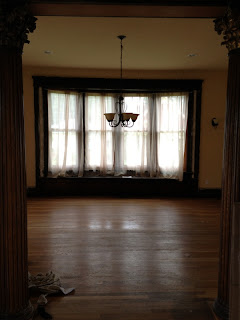 I realize I said in my last post you wouldn't hear from me for a week on account of no internet and moving and such, but I apparently lied.  Because sometimes you have a day you must capture before it's gone.  Enter Day One.

Yesterday after receiving the keys to Banister Abbey, I met our contractor to discuss some details of the work schedule.  While walking around the house, Contractor Man noticed there was a three-foot section of copper pipe missing from the heat pump.  Ours for two hours and already -- sabotage!

A call to my real estate agent revealed copper theft is popular, especially on buildings known to be vacant.  It was not a great "Welcome Home!" It was more of a "Welcome Home, assholes!"

Slightly unnerved by the near-immediate theft on our property, Alex and Seattle Dad went to Banister Abbey last night to "turn on some lights and leave a radio on" but judging from the shot glasses I found over there this morning, I think they really just went over there to drink whiskey.

It sounded like a good idea to leave a radio on, create a little sound around the house, perhaps give any further intruders slight pause.  But as I pulled up in front of Banister Abbey this morning,  I wondered, "What the hell is that sound?"  I unlocked the front door and YOU'VE BEEN..... THUNDERSTRUCK.

"Thunderstruck" accosted me at an eardrum-piercing decibel level and nearly knocked me backwards onto the porch.  The boys sure did leave a radio on -- wisely at intruder-paralyzing volume -- all night long.  No wonder someone stole our copper pipe.  It's like they sensed we were going to be horrible.

But let me go back a few minutes.  When I first pulled up to Banister Abbey, before the AC/DC encounter,  I saw a familiar truck parked out front of the house.  It was the decidedly unique truck of the seller of Banister Abbey, whom I'll call "Mr. Cool."

I pulled into the driveway and Mr. Cool immediately charged towards me with his hand outstretched and a loud,  "Congratulations!"  We shook hands and stared at Banister Abbey together.  He told me how long the house had been in his family -- that he, in fact, had been raised there himself.  He was happy to know there would be children growing up there again. (He was there to get the water meter reading, by the way, not to be creepy and stare at me through the windows.)

A little later, my meeting with a security system guy wrapping up nicely, another guy walked up and stood on the porch. He introduced himself as Detective So-n-So from the Sheriff's Office, and asked if Mr. Cool happened to be home?

Hmm.  That's not so good.   I told Sheriff Guy Mr. Cool was gone and Banister Abbey was my house now, official as of the day before.  Sheriff Guy asked if I knew where Mr. Cool moved?  I said no.

(I did not mention I'd just had a delightful conversation with Mr. Cool out on the driveway less than an hour before.  That was our special passing-the-torch time, no one's business but ours.)

Sheriff Guy assured me it was a civil matter he was investigating, not a criminal one, so I didn't need to fear for my family's safety in our new house.  Fantastic news!  Missing copper pipe and only a civil matter that brought the law to my doorstep!  It's only Day One!  Yippee! 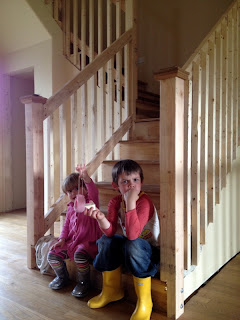 The cleaning lady, the one scheduled to do the extensive move-in cleaning, decided not to come but apparently didn't want to talk about it because she wouldn't answer her phone.  I started scrubbing the crap caked on the refrigerator shelves myself while frantically calling more cleaning ladies.  My children ran laps through the empty house, yelling.  Yelling really echoes in a big empty house.  It hurt my ears more than Thunderstruck.

The security guy came back because he forgot his bag.   He scared the crap out of me when I saw him peeking through the front door.  Is it ironic the security system guy nearly made me scream at the top of my lungs for help?

While chatting again with Security Guy,  someone else walked up the pathway and stood on the front porch, a woman this time.  Lucien immediately took her by the hand and led her upstairs.  What the hell?  I ran away from Security Guy to stop the lady on the landing and ask her who the hell she was.  Security Guy called out he'd be back with a security system bid and I responded, "Good, we gonna need it, all sorts of people up in here."

Neighbor lady is a nice lady who walks two miles up and down the street every day.  She knew Mr. Cool and his family from her many passes in front of the house and had many tales to tell about the house.  Nice lady, happy to meet her, but I really must talk to Lucien about leading strangers around our new house by the hand.

While dragging the recycling bins out to the curb before I left,  I met another neighbor.  He's a spritely little thing I'll call "Puck."  Puck is a middle-aged artist and lives next door to Banister Abbey in a rental house full of other artists.  They're trying to pool their money to buy the house together when it goes up for auction in August.

A house full of artists, musicians and actors?  I nearly squealed with glee because for me, that's the jackpot.  I've been around those types all my life.   I love them and want a house full of them, complete with organic garden, next to me at all times.  Close your eyes -- can't you just hear the guitar and smell the pot already?

As I walked back to the car, puzzled but thrilled with the happenings of the day, I glanced up at a window in the house full of artists.   Oh Sweet Jesus -- an Adonis!  A dark-haired, artsy Adonis.  And he was shirtless.  And gazing longingly into the middle distance.  He looked down and waved.

So far so good over here, people.