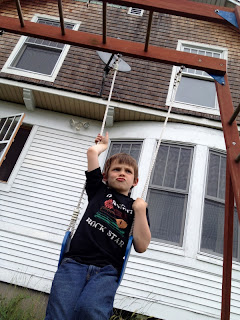 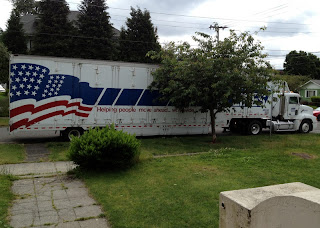 Our lives are now boxes and piles, piles and boxes.  Every box I open reveals a plethora of things I didn't remember until that very second but no longer want one second more.  It's an endless cycle of excitement and despair --

and so on and so forth.

There is also an "I have to recycle this old electronic thing to be a decent human being but have no idea how to do that" pile.  That's my least favorite pile; I try not to look at it too much. 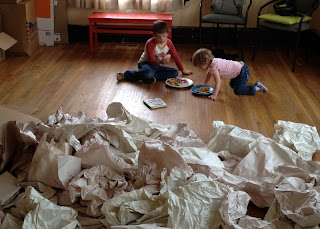 The packing material sneaks up on the children.  They will not see it coming.

We moved in and Banister Abbey was immediately part of the family. We celebrated by riding bikes through the entry hall and breakdancing in the kitchen.  The oak floors are already traumatized and seeing a therapist.  There are several million boxes and piles and loud voices echo even more loudly in an empty house, but we're happy.  We finally, finally have a home. 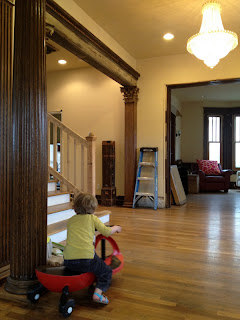 ...a home with a temporary banister so we don't fall off our stairs

We lured some friends over with pizza and booze and razzle dazzle so they would help us all day Saturday.  They dismantled our swingset at our old house and re-assembled it in The Abbey's side yard.  They also went to the storage unit in Bellevue (where I likely left Hemingway Guy shuffling around) and cleared out all the furniture.  We may not find the bedsheets or coffee maker for many months, but at least we have a dining room table. 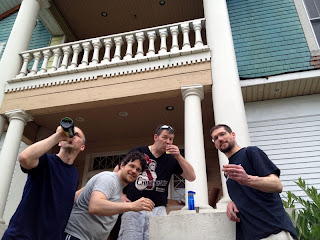 The men of Banister Abbey 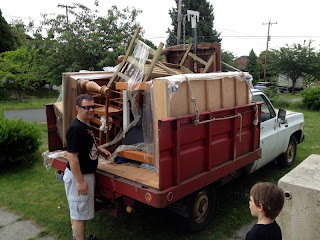 the contents of a storage unit 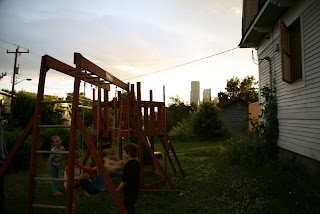 a swingset in the city This neighborhood is full of characters.  I've met many of them but have the feeling I've barely scratched the surface.  My favorite people in the neighborhood are thus far the artists next door, of course, who are so environmentally conscious they don't turn on lights after dark.  I like to imagine the artists running into each other in the hallways at night.  It makes me smile.

There's also the man who works at the large building down the street so walks in front of our house twice a day.  He swears Coco is a boy.  When I tell him no, really, she's my daughter, he says, "Honey, that ain't no girl," looks at me like I'm crazy and shakes his head as he walks away.  There's no persuading him.  Coco doesn't care, just continues to play in the mud in her Nirvana t-shirt and torn jeans.

My least favorite neighbors are the ones directly behind us on whom I've already called 911 for detonating what sounded to be a stick of dynamite in their kitchen.  I went over to check on them after I called 911 and they were like, "Nope, explosion didn't happen here *cough cough* *billowing smoke*"

The nice firemen who showed up told me the sound was likely an M-80, a very illegal firework.  That was a firework?  It sounded more like a cannon firing next to my ear, or a transformer blowing, or perhaps a meth lab exploding?  The Fourth of July is not likely to be a quiet one this year. 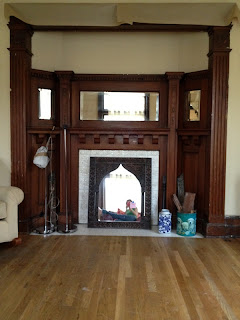 Banister Abbey gets an immense volume of foot traffic in front all day long.  All I have to do is sit on the front steps and within five minutes I've made a new friend.  The previous owner, Mr. Cool, has five thousand cousins, some of whom don't realize Mr. Cool sold the house when they pull up front with the intent to visit him.  When they see me, the confused cousins call out things to each other like, "Hey Reggie, who is that small white woman sitting on Mr. Cool's porch?"  One guy even rubbed his eyes then looked at me again.  I was still there.  I was not a small white woman mirage.

When they find out I'm the new owner of The Abbey, the cousins are shocked at first but then shake my hand warmly and tell me tales of hide-and-seek in the attic of the house as kids and large family dinners in the dining room.  I've invited them back to play hide-and-seek with us anytime.  I've also invited them back to cook me a large dinner.  Those are my favorite moments so far in the new neighborhood.

Many neighbors stop by to express their relief Banister Abbey wasn't bought by a developer.  That's what was assumed would happen when it went up for sale.  It happens often to the big old houses of the C.D. -- they get torn down for townhouses or broken up into individual apartments.  It's a damn shame.

But when we put that swingset in the side yard, the neighborhood realized it was us, it was a single family intent on living here, and came out to greet us joyfully.  Banister Abbey lives on huzzah!

I have to go unpack more boxes and shuffle more crap around. I don't have a lot of writing time these days but I will certainly be back to tell you tales of copper thievery and possible meth labs and my neighbors who are all colors of the rainbow and speak many strange languages.  There are also many people with blue hair and tattoos pushing babies in strollers.  It's the C.D. baby. 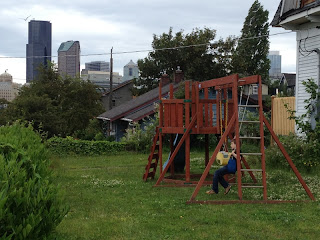 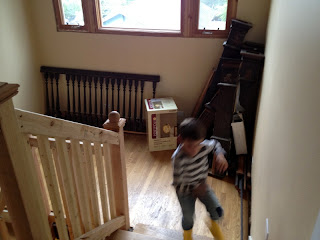 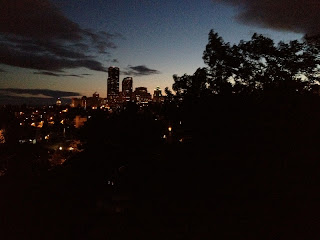